Here is a list of the best free rocket launch schedule tracker websites. Countries around the globe are working to expand their reach into space. The private sector is also a part of it with many private companies offering space flights as well as companies launching satellites and services. As a result, the number of rocket launches every year is soaring.

In this post, I’m covering 8 free websites to track the schedule of rocket launches around the globe. All these websites are free to use and cover a list of upcoming launches. Most of the websites also include past launches and a launch history catalog to track old launches as well. You get the functionality to sort out the launches by launch vehicles, launch sites, agencies, and more. This makes it easy to find out old and specific launches with ease.

NextSpaceFlight is my favorite website to track the rocket launch schedules around the world. This website lists upcoming as well as past rocket launches with details about the mission, rocket, payload, location, and stats. It also has catalogs of events, rockets, reusable vehicles, and locations for exploration. 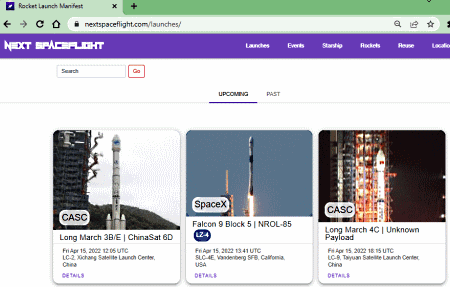 Next SpaceFlight is a free rocket launch schedule tracker website. This website covers Launches, Events, Starship, Rockets, Reusable Vehicles, and Locations. The Launches section covers the Upcoming and the Past launches.

This subsection lists all the upcoming launches with a confirmed or approximate launch date. The title starts with the rocket name and payload. Then it shows the launch date and time followed by the launch site. Each of the listed launches has a “Details” button that leads to a page with launch status, vehicles involved, mission details, location, launch viewing site, and other stats. It also lists the different space agencies and companies at the bottom of the list. The same can also be used to sort out the launches of a particular space agency or company.

This subsection lists the launches that have already happened. It uses the same format as in Upcoming Launches to show the information about the launch. It shows the status of the launch mission by using a color frame around each listing.

Apart from the launches, this website covers events related to space including a streaming link if available. Similarly, it also lists rockets, reusable vehicles,  and locations. Visitors can explore the various rockets throughout history and check out all the launch locations around the globe. 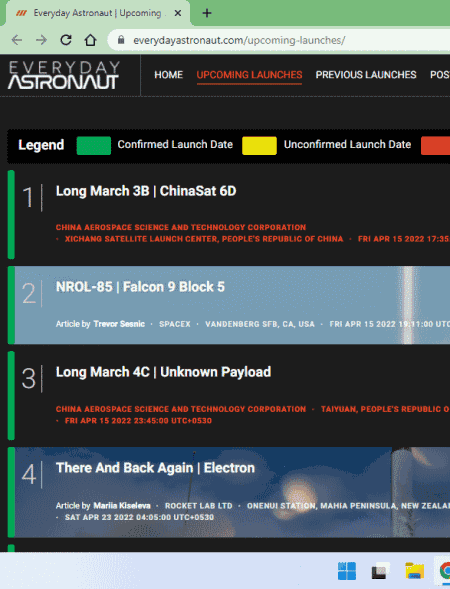 Everyday Astrounaut website that covers rocket launches and all other events around the topic of space travel. It also covers long posts explaining related technology including rockets, engines, and more. The posts break down complex technologies with overtime changes while keeping things as simple as possible. This website has two separate sections tracking upcoming and previous rocket launches around the world.

Some of the listings also have a blog post behind them. A click on such a listing leads to a blog post with all the available information about that launch.

The Previous Launches section lists all the launches tracked on this website. There are three legends to help navigate the long list; Success, Partial Failure, and Failure. These legends are based on the status of the missions. Along with that, there are options to sort the launches by date, country, launch provider, rocket, mission type, orbit, launch pad, and launch status. All the launches covered under this section are tied to blog posts. A click on a listing leads to a respective blog post covering detailed information about the launch and the status of the mission. 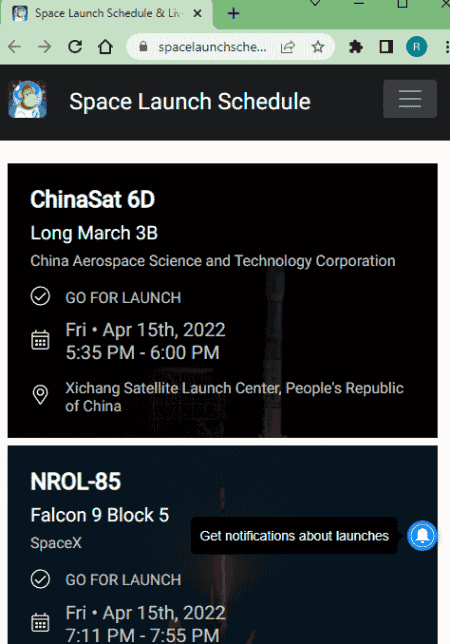 Space Launch Schedule is a free rocket launch schedule tracker website. This website lists upcoming rocket launches. Each listing starts with the name of the payload followed by the rocket name and the name of the agency or company behind that rocket. Then it shows the data and launch window along with the launch site. Clicking on a listing brings out details about the launch. It covers the Weather Forecast During Launch, Mission, Location, Rocket, Landing, and Agency. It also covers the watch site where people can go and view the launch in person. Apart from that, there are Location, Agency, Rocket, Year, Event, and News sections at the top of this website. Each section expands a list of respective listings such as launch sites, rockets, yearly schedules, etc. 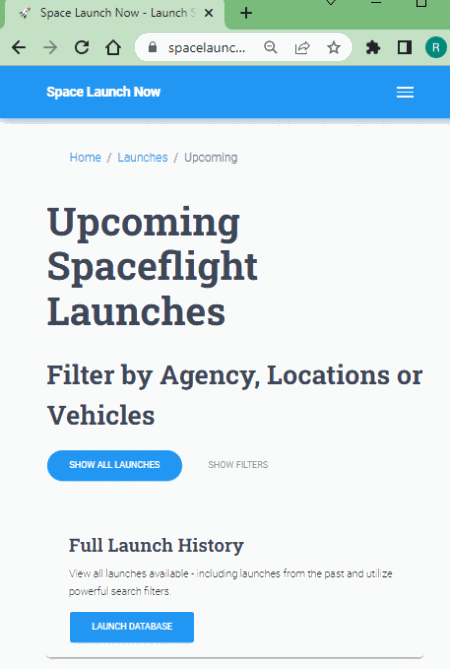 Space Launch Now is another free rocket launch schedule tracker website. This website has a launch database to track upcoming and past launches. Either of these lists can be filtered by agency, location, and launch vehicle. The list shows the name of the launch (rocket and payload) along with the name of the agency, launch site, date, and launch window. Each launch has a explore button and a share button. The explore button leads to more details about the launch. This includes payload details, mission, and launch location on the map. Apart from the launches, this website also covers starships, events, vehicles (rockets and docking vehicles), and astronauts. 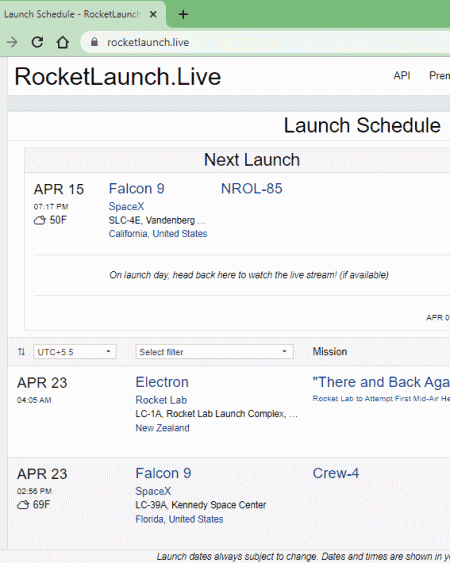 Rocket Launch Live is another free rocket launch schedule tracker website. Right on the homepage, it shows upcoming launches. It shows the date of the launch in front followed by the rocket name and the payload or mission. Along with that, it shows the name of the agency, the launch site, and the weather forecast for the launch day. That is all this website covers about the launch except for some launches where it uses certain tags such as crewed, ISS, etc. Along with the upcoming launches, it also shows the past launches. In fact, visitors can explore launch history and filter out specific launches by agency, launch site, and launch vehicle. 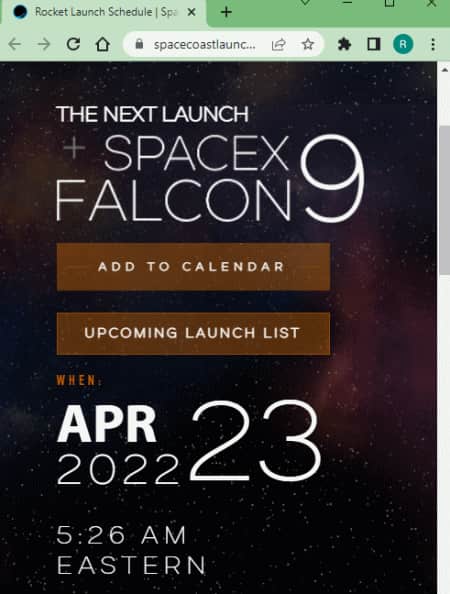 Space Coast Launches is a rocket launch tracker website featuring really nice graphical interface. This website maintains a list of upcoming rocket launches. Each entry in the list shows the date of the launch, vehicle, mission, launch site, and launch window. It also has a “Find a Viewing” section where it lists the potential location to watch a particular launch from. Apart from that, it also has a collection of rockets and other space vehicles. Visitors can explore the collection to read about the vechiles. 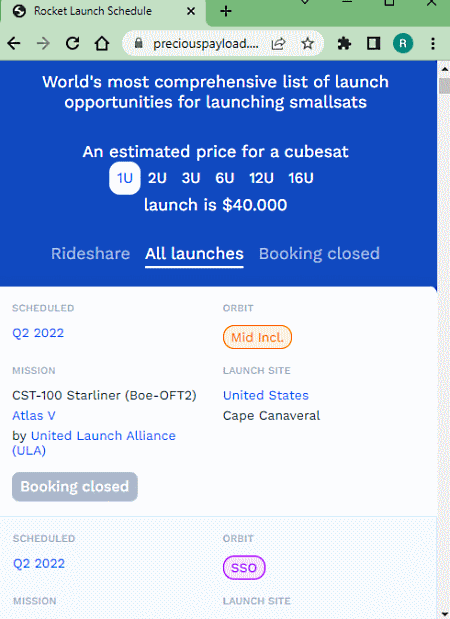 Precious Payload US/UAE space-tech startup that makes planning and execution of satellite missions easier by taking care of mission and supply chain. Their website has a rocket launch schedule tracker. It is designed to help find a suitable ride for someone who wants to launch a satellite. The rocket schedule here allows us to filter out rockets by the size/price of the CubeSat. The list covers rideshares launches, booking closed, and all launches. It offers basic information about coveting the rocket name.  schedule, launch site, and orbit. 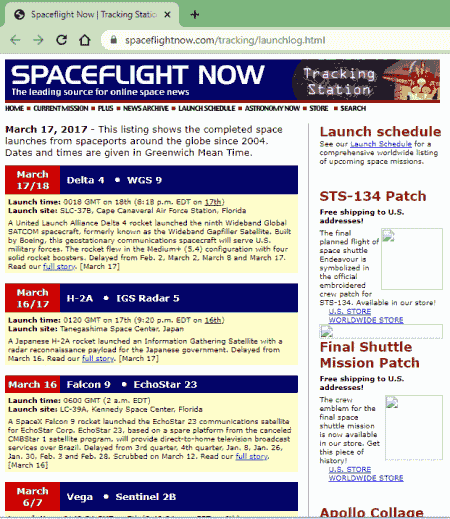 Space Flight Now is yet another free rocket launch schedule tracker website. It is actually a news portal for space flights and events around that. It has a dedicated Launch Schedule section where it lists upcoming launches by date. The list covers launch time, launch site, and mission information.