Here is a list of the best free MAC Screen Recorder Software. These let you record screen, audio from microphone, or audio playing in the device. You can also use it to record full screen or a part of the screen. The recorded screen can be thus saved in different format for different devices, like: Xbox, iPad, iPod, iPhone, Playstation, Android, and many more such devices. The recorded screen can also be directly uploaded, and shared with friends via YouTube, Facebook, Twitter, and many more such options. You can also stream your videos directly over Twitch, Youtube, and various other websites.

Out of the software enlisted here, I like OBS (Open Broadcaster Software) Studio the most. This screen recorder for MAC is quite feature rich, and supports close platform feature. It can be used to video capture MAC, and save it in various formats. It can also be used to capture Webcam, and Capture cards. The screen can be directly streamed over Twitch, YouTube, YouTube Gaming, Hitbox.tv, beam.pro, daily motion, and Livecoding.tv. You can also use it to personalise a number of options to successfully record the screen of Mac. 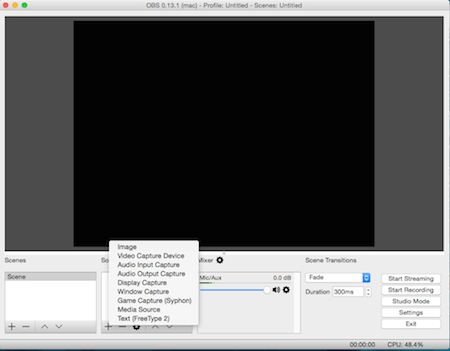 OBS Studio or Open Broadcaster Software is a simple screen recorder for mac which lets you screen capture mac for free. It can also be used to capture webcam, and capture cards. This free screen recorder for mac offers multi platform support on Windows, MAC, and Linux. It is a powerful software with a lot of features. The recorded file can be saved as FLV, MP4, MOV, MKV, TS, and M3U8. The recording can also be streamed on Twitch, YouTube, YouTube Gaming, Hitbox.tv, beam.pro, daily motion, and Livecoding.tv. You can also stream it on custom streaming server. Here you can create different scenes, and automatically switch between scenes. You can choose different sources, like: image, video capture MAC, audio input capture, display capture, window capture MAC, game capture on MAC (Syphon), Media Source, and Text. You can also choose the scene transitions effects, and scene transition duration. Multiple stream previewing, and scene previewing feature is also available. The recordings can be rotated, flipped, and fitted to screen. The region can also be moved up / down. It is available for OS X Mountain Lion, OS X Mavericks, OS X Yosemite, and OS X El Capitan. 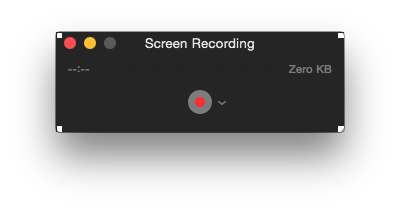 QuickTime Player is a popular media player software that comes bundled with MAC. It is a feature rich media player, and can also be used as MAC screen recorder. It can also be used to record movies, and audio. You can choose the option to either video capture the full screen on MAC, or a part of the screen. The MAC screen captured can then be saved as MOV. The screen thus recorded can be exported as 1080p, 720p, and 480p. It can also be optimized to export to iPod touch, iPhone 3GS, iPad, iPhone 4, iPad 2, and iPhone 5. The captured MAC screen thus recorded can also be sent to iTunes. The recording can also be shared on Mail, Message, Vimeo, Facebook, Flickr, and YouTube. You can also rotate, and flip the recorded video. The option can also be set to split clip, and add clip to the end. You can also choose the option to Trim the recording. You need QuickTime Player 10 or later to record screen on MAC. On OS X Yosemite, and OS X El Capitan you can also record screens of iOS device (iPhone, iPad, iPod touch) with the help of Lightning port.

In case of New Audio Recording you can choose the option to record the audio via microphone. You can also make use of volume slider to manage the volume while recording. 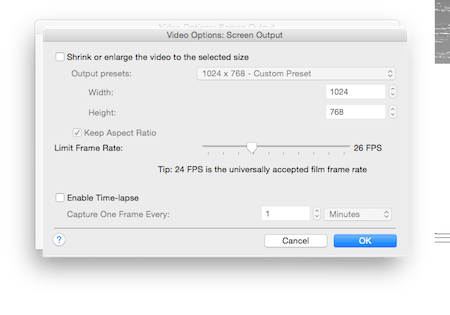 Debut is a good free MAC screen recorder software. It can be used to video capture MAC screen, webcam, network, screen, and some other devices like VHS recorder. It can be used to record a part of the selection, or a full screen. The MAC screen captured can be saved in various formats, like: 3GP, MOV, ASF, AVI, DV, FLV, MKV, MP4, MPG, OGV, WEBM, and WMV. It can also be used to run the captured screenshot on iPod, PSP, iPhone, Xbox 360, PlayStation 3, and Fast Capture. Here you can also set the encoder options and the video options, and can set average bitrate of audio and video, video size, frame rate, and elapse time lapse. The mouse is highlighted to annotate the video, and you can also add captions and create time stamps to the video. It can also be used to video capture MAC from microphone, and the device. Different color settings and video effects can be applied before recording. You can choose to capture the screen in either 4:3 or 16:9. It can also be used to take screen capture MAC. It is available for OS X Tiger, OS X Leopard, OS X Snow Leopard, OS X Lion, OS X Mountain Lion, OS X Mavericks, OS X Yosemite, and OS X El Capitan.

How to record screen on MAC using Debut: 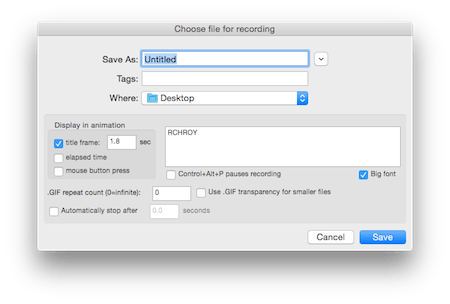 How to record screen using LICEcap: 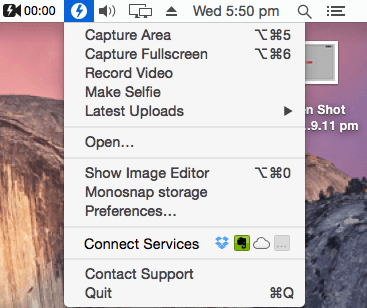 Monosnap is a good software that acts as screen recorder for MAC. You can use it to record either full screen, or the option to record a specific area of the screen. Different options are available to set the frames per second, recording quality, webcam, and audio options. It can be used to record images and videos from webcam, and audio from microphones. You can pause the recording at any time. The recorded screen can be saved as MP4, or GIF. It is available for OS X Mavericks, OS X Yosemite, and OS X El Capitan.

How to record screen on MAC using Monosnap:

How to record Mac screen using Any Screen Recorder:

Apowersoft Screen Recorder is a simple freeware application which can work as a screen recorder for MAC. It can be used to record the full screen, or a part of the screen, and from the webcam. In order to record the Audio playing on MAC, you have to install ApowersoftAudioDeviceInstall. Right and left clicks can be animated to highlight the location where it is clicked. It is available for OS X Mountain Lion, OS X Mavericks, OS X Yosemite, and OS X El Capitan. 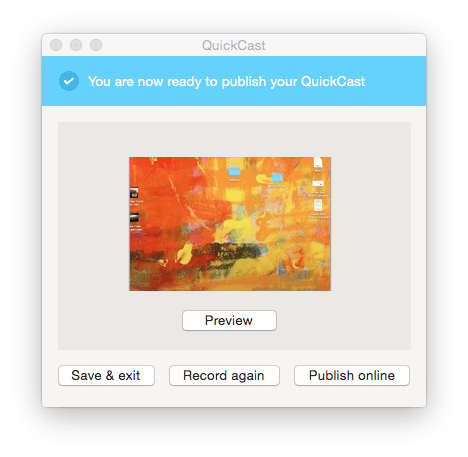 QuickCast is a simple lightweight software that can be used to record screen on MAC. It can be used to record video of a maximum 5 minute duration. You can record the screen either after logging in or without logging in to the software. The recorded video is uploaded online, and can be shared on Facebook, Twitter, Email, and saved locally as MP4. QuickCast is available for OS X Mountain Lion, OS X Mavericks, OS X Yosemite, and OS X El Capitan.

How to use MAC screen recorder feature of QuickCast: 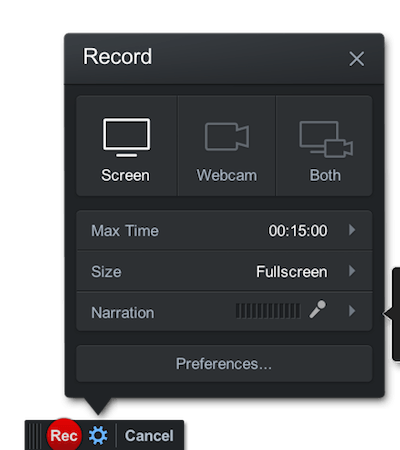 How to record screen on Mac and upload to Youtube: 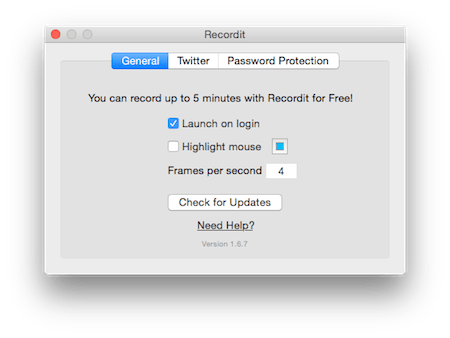 Recordit is a simple software that lets you video capture MAC screen for free. The free version lets you record screen on MAC for upto 5 minutes. The mouse clicks can be highlighted using different color. The Frames per second option can also be set. After the video is recorded, it is automatically uploaded on Recordit website. The video can then be downloaded as MP4 or GIF. The video address can be copied and shared within your network, and can also be shared on Twitter.

How to use Recordit as MAC Screen Recorder:

Iris is a simple software that lets you video screen capture MAC. It can also be used to record audio from the device, or the microphone. In order to record audio from MAC you have to install Sound Siphon (but it’s a paid software). It records retina quality videos, and the files are named automatically. Any image or color can be enabled to hide the desktop while recording. Mouse highlight option can be chosen from different mouse highlights. Different options can be set to show countdown before Screen recording on MAC, hide other applications before recording, include Iris promotion at end of MAC screen recording, and use hardware acceleration if possible. A timer can also be scheduled to start and stop the recording. The recordings can be shared via Email, Messages, or AirDrop. You can also include your face by using iSight or webcam. It can be used on OS X Mavericks, OS X Yosemite, and OS X El Capitan.

How to record videos using Iris:

The free version adds watermark and outro to the recordings.