Here is a list of Best Free Online Twitter Thread Maker Websites. All these are free websites that let you generate a thread of tweets to post on Twitter. These tools basically split your long tweet into multiple subtweets that you can post into a single thread on your Twitter. Most of these tools automatically generate a thread of multiple tweets for a typed message. However, on one website, you have to manually add tweets that you want to post in a thread. All in all, these are very easy to use websites that let you generate a Twitter thread.

In one of these Twitter thread generators, you can directly post a thread on your Twitter account. Just login with your Twitter account, enter your message, generate a thread, and then publish it on Twitter. You can also view statistics including total number of characters and tweets in these. Plus, numbering is also added to the tweets in some of these Twitter thread makers. Additional features including Quote Retweet and Fullscreen Mode are also provided in one of these. In general, these free tools make it easier for you to create a thread on Twitter. 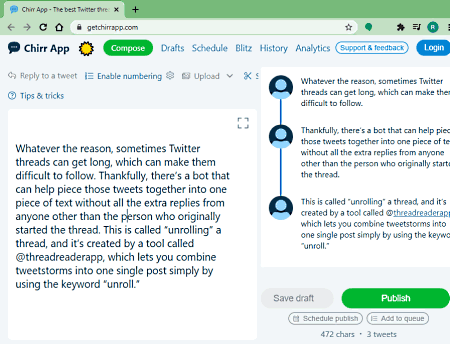 How to make a thread on twitter using Chirr App:

A lot of features are locked in this free plan of Chirr App, like schedule, analytics, drafts, etc. You will need to subscribe to its pro plan to remove all limitations.

It is one of the best Twitter thread maker that also lets you publish the tweets directly to Twitter. 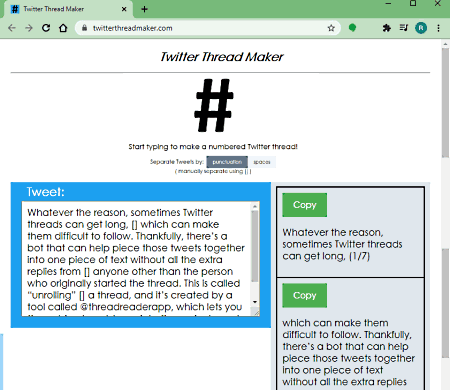 Twitter Thread Maker (by Daniel Wang), as the name suggests, is a dedicated free Twitter thread maker website. It is a nice and easy to use online service that enables you to create a numbered Twitter thread. You can type your Tweet or copy and paste the message and it will automatically break your tweet into a series of numbered subtweets creating a thread. It lets you copy the tweets to post them on your Twitter account.

How to make a thread on twitter using this free online service:

It is a very easy to use online Twitter thread maker to generate a thread with numbered subtweets. 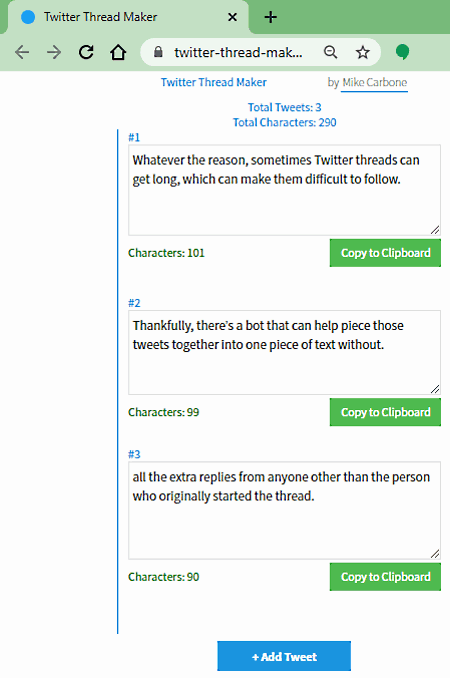 Twitter Thread Maker (by Mike Carbone) is yet another twitter thread generator website on this list. It is a simple tool using which you can add your message into multiple tweets to generate a whole thread. You can copy all tweets to the clipboard and paste on Twitter to post your thread. It displays total number tweets along with total characters in entire thread as well as in the individual tweets.