These free face detection software for Windows can be really helpful with sorting out similar photos from a collection of photos. Also if you want to crop out just the faces from group photos, these software can be a time savior with the batch face detection feature.

Go through the list to find out more about these facial detection software and also know how to detect faces in photos using these software.

My pick is SNFace Crop. This software quickly detects all the faces from the Image that you load. After detecting the faces, you can crop out the faces as thumbnail images at a time, and save them in square or oval shape. 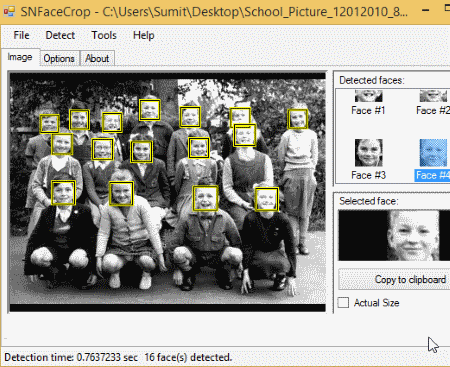 SNFace Crop is an open source facial detection software, that primarily detects all the faces in a picture, then crops the faces out as separate pictures. It helps you out to detect faces from a group photograph, and spares you the labor of separating faces manually.

All you have to do is import a photo with faces here. Once you begin Face detection, it automatically detects faces in no time. All the detected faces are displayed in a panel, which you can view individually. Now the crop feature lets you choose the crop profile from square or oval. You can also add a background to the photo in solid colors. The supported formats for face detection are: JPEG, PNG, and BMP.

You can copy the cropped out face images to clipboard from the Selected Face panel. Copied images can be pasted anywhere you want.

This free face detection software not only detects front face profile, but also side face profile. You can also Batch detect faces from multiple photos.

Its a great face detector software and helped me a great deal while cropping out faces from group photos. 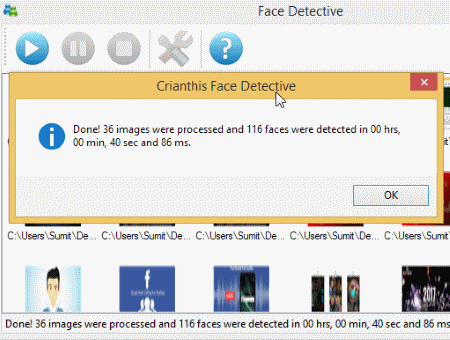 All the detected faces are saved in a new folder, which you will find under: My Documents/Crianthis Software/Faces. Every time you do a new batch facial detection, a new folder is created with all the detected faces in it. At first, I was a little confused as this face detection software did not give any option to define an output folder to save photos. After testing, I figured out the default output destination.

After cropping the detected faces, all the images are saved in thumbnail size and in JPG format. 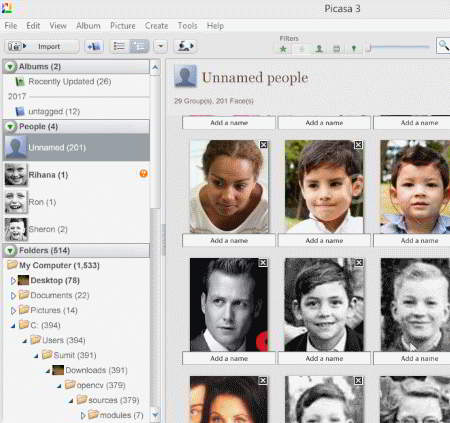 Picasa is one of the most popular image viewer with face detection. The face detection tool can be accessed in the People tab of Picasa. When you visit this tab, Picasa will start to detect human faces in photos from all the folders of your computer. This process may take a little while. Once done, Picasa displays all the photos with detected faces as Unnamed People.

All the faces that you see are not cut out as separate images. You can tag the detected faces with a name. When you search for a tag, Picasa displays all the photos with similar faces. Picasa lets you edit the detected photos right from the Face Detection Tab.

You can also export all the faces to a different folders. Simply use the hotkey Ctrl + Shift + S, choose a folder to export images, choose image quality, and Export.

Once you have created a face tag on Picasa, its face detection tool will remember the face and whenever you add a new photo with same facial features, it will automatically add the photo to the respective tag.

Picasa is a discontinued product, but is still available for download from various software hosting websites. 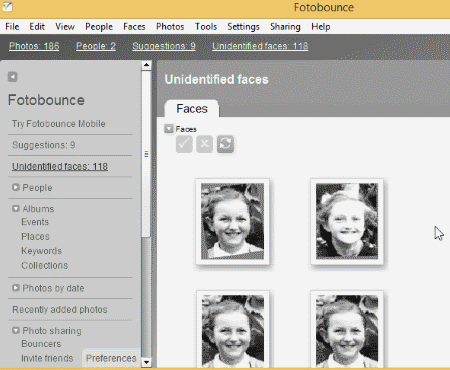 Fotobounce is a popular image organizer that supports face detection in images. It features an interactive interface and works the same way as Picasa.

It does not detects all the images from you PC, but you have to select a folder with photos on which you want to use the face detection. Adding a folder displays all the photos from the selected folder. Use the Unidentified Faces tool to begin image face detection. Similar looking faces are organized separately as Unknown. Tag a face, and all the photos with similar face profile are added to that tag.

Although this free face detection software works similar to Picasa, but took less time to detect the faces while testing. 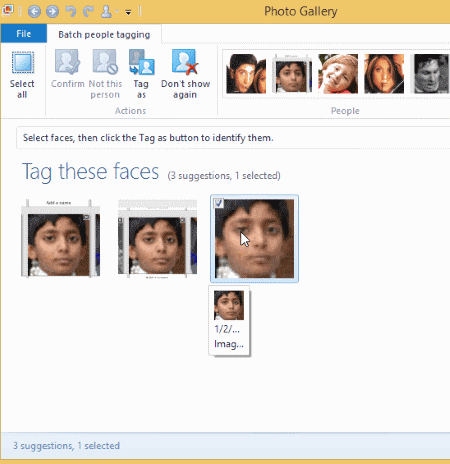 Windows Photo Gallery is a photo viewer and manager with face detection feature. It not only detects faces but also recognizes similar faces from a photo album. You can also tag a face with a name, and search for the pictures with similar face from various folders of your computer.

For facial detection, the default folder is set as the Pictures folder of your PC, but you can also include photos from other folders in your PC.

Use the Batch People Tag option available at the top of the interface to detect the faces from the selected folders. It looks for the images with faces, and displays the faces in a list of faces detected. Now you can click on a face to view all the images with similar faces. You can tag the detected faces, and this Photo Viewer displays the photos with matching faces when you search for a tag.

You do not have option here to crop or save the similar faces at a single place, and you can only view photos with similar faces using this free face detection software.

Windows Photo Gallery comes bundle with Windows Movie Maker and you will have to download both at the same time from the official Microsoft website. 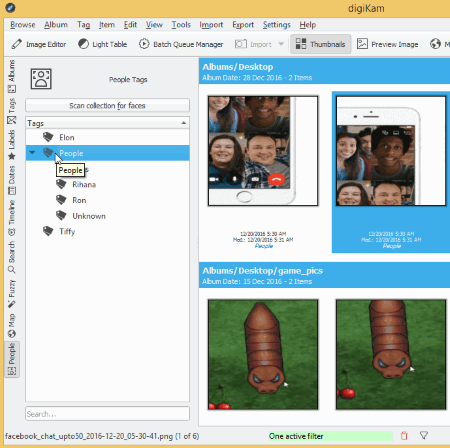 Digikam is another photo manager and a facial detection software. The People tool on this software helps you out with face detection in images. Select a folder to scan all the photos in it for faces. When you begin scanning a folder, a dialogue box will appear where you have to make sure that you have checked Detect Faces option. In case you have not selected a specific folder to scan, Digikam scans all the folders of your computer for photos with faces.

The facial detection tool of Digikam detects faces, but along with faces, it also detected random objects and shapes. 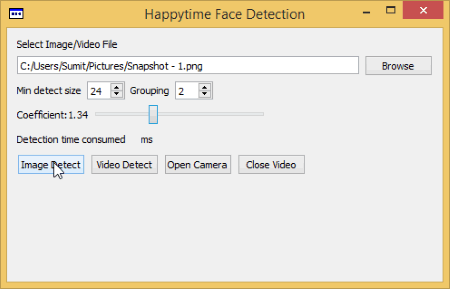 Happytime Face Detection is a dedicated free face detection software to detect faces in images or videos. It has a simple interface and only allows jpg, jpeg, png, and bmp image files for face detection.

It can only detect faces from a single photo at a time. You just have to browse and select a photo, and select the Image Detect option. In no time, another window will appear with the image. Here you will see that all the faces in the photo being red circled and highlighted as faces. The image with highlighted faces can be saved.

This face detection software has options to set Detect size, Grouping, and Coefficient for this facial detector.

I tried some photos with side faces and front faces for testing, and it didn’t detect the side face profile.