Here is a list of 4 best free meme generator software for Windows. These software come with images that you can use to create interesting memes on PC.

Who does not like memes? Everybody does. It’s fun, its quick, its spot on. We all have come across heaps of memes, but at times we want to create a meme, or we need a special one for our little group. The question is “how to make your own meme?”. There are dozens of online Meme Generators out there. But it works fine if you have a sudden hilarious idea. What if you want to make memes but you ran out of funny ideas? What if you get a limited period/amount of internet and you do not want to waste it?

Enter offline meme generation. Making a meme is not nuclear physics. It’s the simplest form of picture editing. The main ingredient is a combination of appropriate image and clever punch line. Create your own meme and who knows, you might end up as the best troll among your friends. All you need is a meme generator, or a simple picture editor. Although the number of Meme Generators for Windows is very limited, we tried to dig the internet and found few for you. Here is a list of Best Free Meme Generators for Windows. So hop in for a journey to become a troll king. 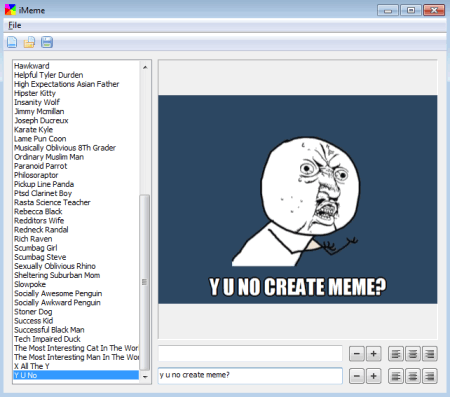 iMeme is a free to download meme generator, available for MAC & WINDOWS. This software is very light and easy to use. This offline meme generator comes preloaded with 50+ meme templates, ensuring there’s always a meme ready for every situation. And in case you can’t have enough of it, download templates and use them with iMeme. The text generator lets you type both at header & footer of the meme in standard IMPACT font. Also if you are not running out of words, you can always reduce the font size to accommodate your words. Though there isn’t any option of direct upload to social media like FACEBOOK, TUMBLR, IMGUR or REDDIT on the WINDOWS version, it doesn’t lack any feature which will stop you from creating The Perfect Meme. The inability to Print directly from this software doesn’t makes it any less capable.

Free Meme Creator, developed by FREE PICTURE SOLUTIONS is a lightweight meme generator. With a size of 3 MB, this is the lightest meme generator in the game. Load a template, add the caption, select font and adjust the text size accordingly. Text can be placed anywhere across the image with the drag-drop feature. The options and the simplicity of this software make it effortless to use. The major turn down for the Swift Meme Maker is the absence of pre-loaded templates. But why to worry if you can download a Free Meme Template pack from Here. Chose your meme template and get going with the trolling. 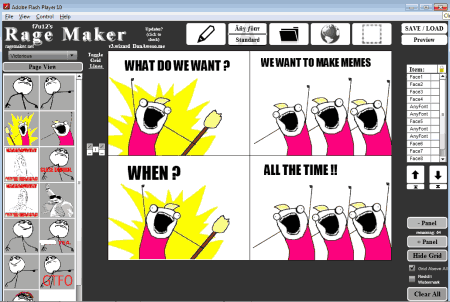 Rage Maker is a Flash application for WINDOWS and its totally free. No doubt, this is the best software in the game. Either you want to create your own meme, or you want to make a rage comics, Rage Maker takes care of it all. The downloadable application does not include templates or rage faces. You can download the image pack separately from the application’s website. The image pack includes tonnes of templates, faces and logos. The easy to use interface has a range of tools and options. The default work-space is a grid with four windows. Depending on the requirement, you can hide the grid or add more grid lines to adjust extra windows in a single frame. Also, you can always add an extra panel, if you think that you need more space. To make a meme, drag the template from the library or load one from your device, hide the grid and scale it to the panel. You just have to add text. The software lets you freely scale, place, rotate your template or a face. If you think that you need to draw something to express yourself better, the tools lets you draw in freehand in any color. Adding a text in any font, size or color is pretty basic. You can load an image from your device or directly import from internet. This application is also a potential GIF animator. The supported image formats are JPG, JPEG, GIF, PNG & BMP. So, let your creativity speak out, and make people laugh like you never did. 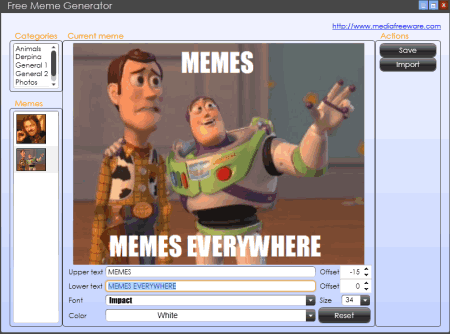 Free Meme Generator is another good software which can help you create a meme instantly. The software is developed by MEDIA FREEWARE. The best part about this meme generator is that, it has tonnes of pre-loaded templates and rage-characters. You want to express your feeling ? Go through the list and find the most apt one. The list is divided into 5 categories, which helps you sort out the exact meme you are looking for. Still can’t find a template which you are looking for? You can import pictures to this meme maker as well. The Text Generator lets you type in the your punch line, both as Header and Footer. You can change the color, size and font of your text as well. If you are not really liking the position of the text, offset option is available for the rescue. Overall, this app is fun to use and it rocks a huge number of templates to choose from. So now on, there will not be a situation for which you won’t have a meme ready. There aren’t any other options available with this meme generator, making it really straightforward to use. You can save your meme in three different formats i.e. JPG, PNG & BMP.