Here is a list of best free recording mixer software for Windows. Through these recording mixer software, you can record and then mix the recorded voice or sound into one audio. To record sound, each of these support microphone device. You can also mix external sound and even add various sound effects to the recorded music. In each of these software, you get a timeline and multiple tracks to record audio and edit it. On each track, you get various tools that only affects the audio of that track like Solo, Mute, Volume, etc.

Most of these software are basically music making software which contain multitrack editor along with recording features. Plus, various music editing features like music instruments sound, timeline, trim, join, split, virtual keyboard, etc., are also present in them. The process of recording and mixing recorded audio is quite simple, but a learning curve is still required to fully utilize these freeware. After mixing the audio, you can preview it and then save in formats like MP3, OGG, WAV, etc.

Audacity is my favorite software because it does not impose any limitation on the number of new tracks. Plus, all essential recording mixing tools are also provided by it. Its interface is also quite simple and intuitive which is another advantage of this software.

You can also check out lists of best free Video Mixing, Music Making, and Music Orchestration software for Windows. 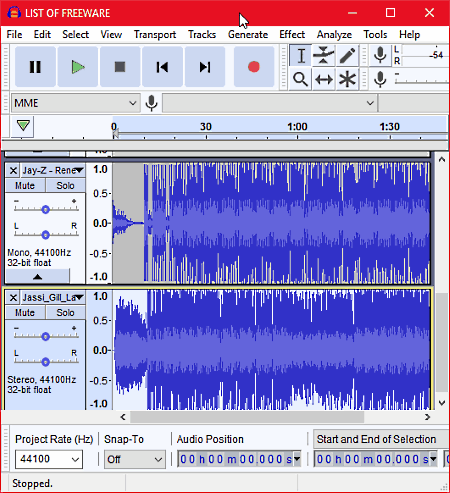 Audacity is a popular open source audio editor software for Windows. You can also use it as a recording mixer software as you can easily record and mix sound in it. You can also load multiple music files and mix with them into one audio piece. The main advantage of this software is that it lets you add an unlimited number of empty tracks on the timeline. On each track, you can either load a local music file or record live song or audio. Now, to put the audio samples of each track at the right place over the timeline, you can use the Edit Tab. In the Edit tab, you get various tools through which you can split audio, join audio, move audio, cut audio, paste audio, and duplicate audio. This software also comes with a bunch of effects (Amplify, Reverb, Phaser, Normalize, etc.) which you can apply over one individual track or to all the tracks.

How to record and mix audio using Audacity:

After mixing the music, you can now preview it by pressing the Play button. Lastly, go to File > Export To menu and export the mixed audio as MP3, WAV, OGG, etc. audio formats. In this software, you can also find some additional tools like Tempo Changer, Pitch Changer, Equalizer, and more. 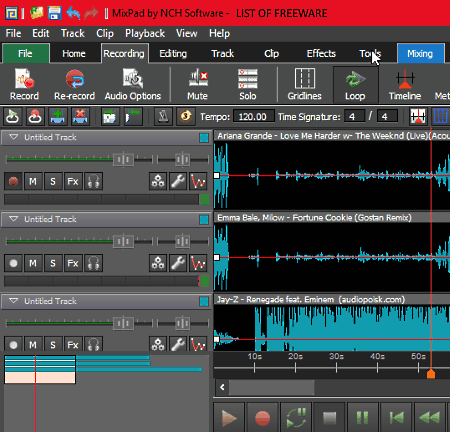 Mixpad is a free recording mixer software for Windows. Using it, you can create, mix, and record multiple tracks all together to create an audio piece. In it, you can load or record music on up to 12 different tracks. After recording the music, you can mix all the tracks together with the use of the Timeline and various Mixing Tools. All the mixing tools are available in its Editing Section which include Cut Region, Trim, Silence, Split Clip, Join, Merge, etc. Besides this, you also get some handy options like Enable/Disable Recording, Mute Track, Only play this track, etc. This software also provides various effects like chorus, cross-fade, amplify, high pass, reverb, etc., that you can apply on each track.

How to record and mix songs using Mixpad:

Note: This software is free for only non-commercial use.

Mixxx is another free recording mixer software for Windows. It is actually an open source DJ mixing software that you can even use as a recording mixing and audio mixing software. Here it offers you 4 different decks in which you can add and mix songs and recordings. You will find all the necessary tools in it to perfectly mix recorded sound. While playing 4 recordings together, you can change the different parameters for each recording separately like master volume, volume balance, sync rate, frequency, gain, audio effects, etc. The interface of this software is quite refined and provides all essential tools on its main interface.

How to mix recordings using this free software:

To mix recordings and songs through this software, first, go to its Options Menu and press the Record Mix option. The record mix option allows you to directly add recording on a selected audio deck using your microphone. After the first recording, you can select a different deck and add another recording on it. Apart from recording, you can also add songs to each deck. After adding recordings to decks, you can play them all together to preview the mixed audio. During the playback, you can tweak different parameters of the recording to further make enhancements to the song. Once the mixing is done, you can save the recording in WAV, FLAC, OGG, and AIFF formats.

If you want a DJ plus a recording mixer software, then this is the best option for you. 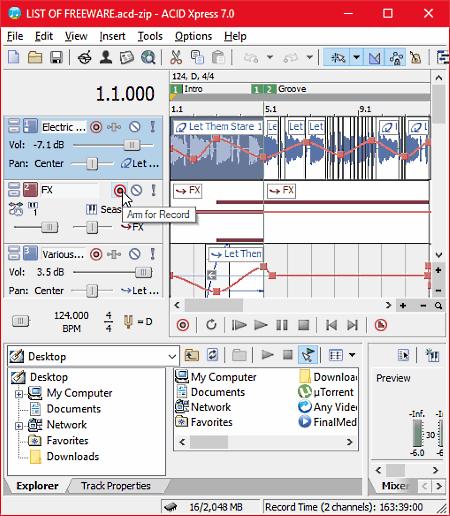 ACID Xpress is the next free recording mixer software for Windows. It is primarily an audio editing software and comes with all standard audio editing features like Audio Effects, Timeline, Time Selection, Split, Trim, Join, etc. Besides audio editing tools, it comes with essential recording mixer tools namely Multiple Tracks and Audio Recorder. In it, you can use up to 10 audio tracks to add recorded sound or locally stored music files. In each audio track, you can also find some handy features like Volume Controller, Track Effects, Solo, Audio Balance, etc.

In order to record and mix audio, first, you need to add multiple tracks on the Timeline. To do that, right click on the timeline and select the insert audio track option. After that, select one of the track and press the record button to start recording on the selected track using a mic. Similarly, you can add recordings on all the tracks. After adding recordings on multiple tracks, you can now set the time frame of the audio, add effects on audio, adjust volume, etc. Once the recording mixing is done, you can listen to it using its internal audio player. If everything sounds as expected, you can Render the mixed recordings and save the output in WMA, WAV, and PCA audio formats. 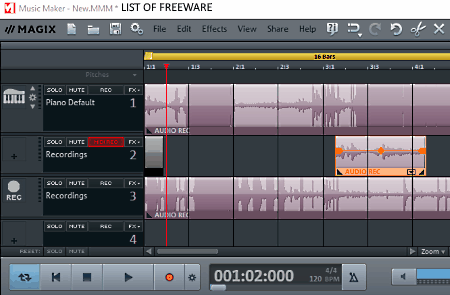 Magix Music Maker is one more free recording mixer software for Windows. It is actually a complete music making software through which you can create music by using sound samples, sounds of MIDI devices, by recording voices or sounds, etc. In order to mix recorded sound or voices, it provides 8 parallel tracks. On each track, you can record audio (through mic) as well as sounds of connected MIDI devices.

The process of recording audio on a track is simple. You need to select a track first and then press the Record Button to start recording sound to that track. Similarly, you can add recorded sound on multiple tracks. Now, to change the position of the recorded audio over the timeline, you can just grab the recording waveform and move forward or backward. On each track, you also get some dedicated tools which only affects the audio of that particular track like Mute, Solo, Recording, MIDI Recording, and FX (sound effects). After mixing the recorded music, you can preview it by pressing the Play button. At last, you can export the mixed audio file in WAV, OGG, WMA, etc. audio formats.

In this software, you get a lot of music production tools like various Sound Samples, Virtual Keyboard, Synthesizer, Sound Effects, Sound Loops, and more. In general, it is one of the simplest recording mixer software.

Note: In this free version of Magix Music Maker, you will face some limitations like limited tracks, limited audio samples, etc. To remove all these limitations, you need to purchase the upgraded version of this software.