Here is a list of Best Free SLDPRT Viewer Software For Windows. These software to view SLDPRT files also let you view other SolidWorks files, such as: SLDASM and SLDDRW, along with various other 3D CAD files. With the listed free SLDPRT viewers, you can closely take a look at 3D files with the help of several 3D model viewing tools they have to offer.

The common viewing tools available in these SLDPRT viewer software let you Zoom In/Out, Pan, Rotate, Spin, and Move a 3D model. You can also view a 3D model in various projections, such as: Top, Bottom, Left, Right, Front, Back, and Isometric. A 3D model’s wireframe, solid model with edges/without edges, and cross sectional views can be seen.

So, go ahead and checkout the list to know more about these SLDPRT viewers and also know how to open SolidWorks files using these free software. 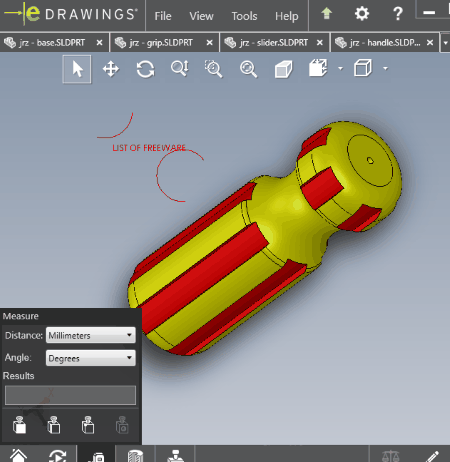 eDrawings is a free 3D drawing viewer for Solidworks, where you can view SLDPRT files. The viewing tools available here let you carefully examine a 3D model. You can zoom in/out, pan, rotate a model freely, view model in different orientations, view wireframe of model, and do much more. A 3D model can be viewed in top, bottom, right, left, isometric, etc. projections.

For more detailed view, you can see a model’s cross section in XY, XZ, or YZ planes. A measurement tool is available, which lets you measure dimensions of edges and surface area. You can even markup SLDPRT models by adding text, comment, image, highlight, and shapes. If you want, you can also add from a number of stamps available, such as: Approved, Confidential, Draft, Final, For Comment, Internal Use only, Void, etc.

You can even print SLDPRT files using this free SLDPRT  viewer, or you can convert SLDPRT file to EPRT, STL, BMP, TIF, JPG, PNG, or GIF.

Along with SLDPRT, you can also open other Solidworks files here, such as SLDASM and SLDDRW. 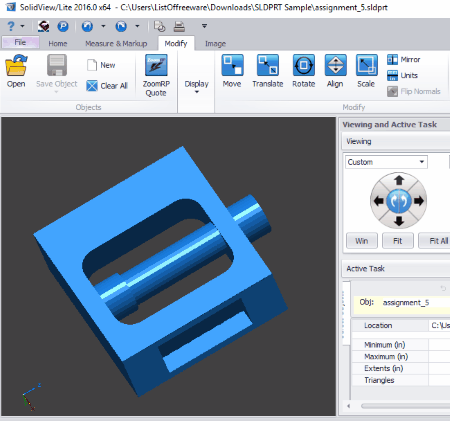 SolidView is another free SLDPRT viewer that can open other SOLIDWORKS file types as well. Open a 3D model in its workspace to view it using the viewing tools available here. The tools to view SLDPRT files provide options to rotate a model freely and have various rendering options.

With the help of your mouse, you can Pan an object and Rotate it freely. Use the Left mouse button to Pan and the Right button to Rotate. Different Render Modes can be used to view a 3D model according to your choice, such as: Extents, Points, Shade, Smooth, Surface Edges, and different combinations of these modes. You can also project a model in different view modes, like: Top, Front, Left, Right, Bottom, Isometric, Trimetric, etc.

Another very good feature available in this SLDPRT viewer is that you can adjust the lighting projection on an object. This lets you manually change the direction of lighting being projected on a 3D object.

The Measurement and Markup tools are available in a single tab. The Measurement tools let you measure length, thickness, arc, angle, etc. Use the markup tools to add text, hyperlink, attachment, image, note, or various shapes.

A SLDPRT file can be saved as a SVD file and you can also take a printout directly from this software.

The interface of this SLDPRT viewer software is quite intuitive and lets you view 3D models with a lot of options. The only limitation of this software is that you cannot open multiple SLDPRT files at a time.

To download this software, you will need to create a free account with SolidView, and you will only be able to download the viewer after registration is complete. 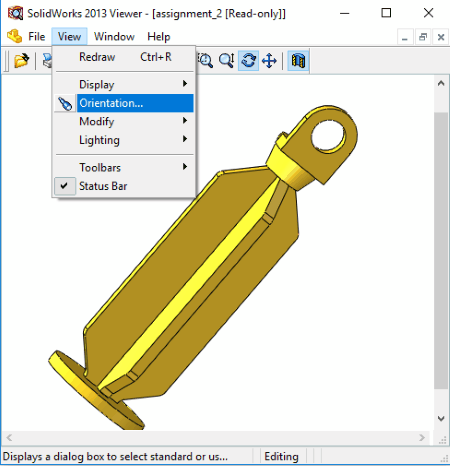 SolidWorks Viewer is a simple free SLDPRT viewer with ample tools to just view SLDPRT files. Along with SLDPRT, you can view SLDASM and SLDDRW files here. This software is a discontinued product from SOLIDWORKS, but is still available for download on software hosting websites for free.

The viewing tools available here are few, but enough to view and analyze a 3D model. The Orientation modes let you view a 3D model from top, bottom, right, left, isometric, trimetric, and dimetric projections. Other tools let you Zoom In/Out, Pan, Move, and Rotate a model freely. You can also change lighting parameters, such as: lighting position, intensity, and direction.

One can open multiple SLDPRT files here and arrange them in various manners in the Viewer window.

If you want to print a file open here, you can do that as well. 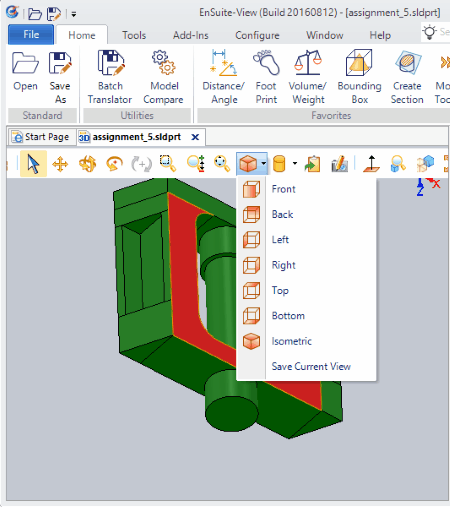 All the standard viewing tools are available here, such as: Pan, Rotate, Spin, Zoom, etc. You can view a model in different orientations, like: Back, Front, Bottom, Top, Isometric, etc. You can also set the model structure to be viewed among Wireframe, Shaded with edges, Shaded without edges, Hidden Lines Grayed, and Hidden Lines Removed.

Other important tools that you will find here are tools to measure length, angle, volume, weight, and cross section tool.

A major drawback of this software is that you will have to register in order download and open files here. You can only view 6 CAD files per month for free here.