Apart from dedicated Blu ray player software, some famous and not so common media players have been listed and all can play Blu ray disc on PC. These Blu ray player freeware will let you manage different parameters while playing videos, like: Volume, Contrast, Color, Hue, Brightness, Sharpness, etc. Some also let you download and add subtitle files in various languages. This article will help you to learn How to play Blu ray ISO on PC and How to play Blu ray disc on PC. So, go through the list, choose a Blu ray disc player software that suits you the most and enjoy your favorite movie in high definition on your PC.

I like Aun Player the most among the listed free media players to play Blu ray. The best thing about this Blu ray player is its simplicity. The interface is pretty clean and simple and you can easily choose to play videos from the source you want. It has many other features which lets you enjoy your favorite audio or video. 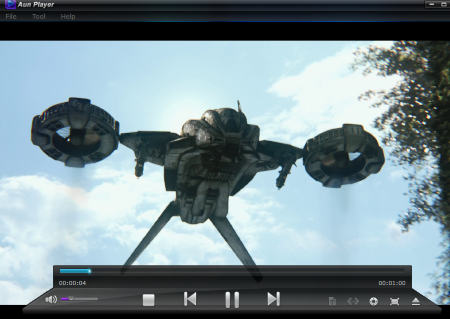 Aun Player is a free media player to play Blu Ray disc on PC. It can play Blu Ray videos directly from a Blu Ray DVD, flash drive, or PC. You are also provided with options to watch a video with subtitles, chapters, and title.

How To Open Blu Ray Video In Aun Player?

These three options are available on the main interface and in the File Menu. Apart of these options, you can control volume, toggle between full and small screen, render subtitles, etc. 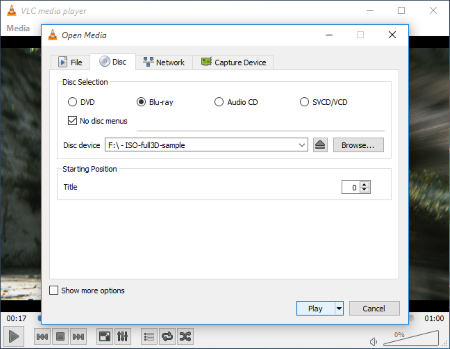 VLC Media Player is a free popular media player and you can count it as one of the best Blu ray players. Lets see how it can play a Blu ray disc or stream a Blu ray ISO file on your PC.

How To Open Blu Ray Video On PC Using VLC?

You can play multiple videos at a time, create and save your own playlist, manage equalizer, etc.

Some Awesome Features Of VLC Media Player Are:

There are many more multimedia playback features that this media player packs.

To play a Blu ray disc or a Blu ray ISO file on this blu ray media player, go to Media >Open Disc >Blu Ray, select the blue ray disc or the ISO file to play it.

You can also play Audio CD, DVD, SVCD, and VCD. 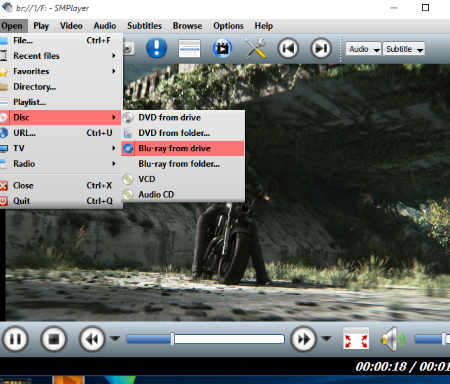 SMPlayer is a free Blu Ray disc player. It lets you enjoy videos or movies from a Blu ray disc. You just have to play a Blu ray disc through Open>Disc>Blu ray from drive/Blu ray from folder. Select the options according to the Blue ray file you want to play, and start watching the video. You also get options to add subtitle files, control volume, jump backward or forward while watching any video.

This Blu ray ISO player supports lots of other media formats, such as: MPEG, WMA, FLC, AVC, WMV, AVI, ASF, Matroska, VIVO, etc. You can also create and save your own playlist. It remembers your settings and plays video or audio from where you left. It offers you to control playback with your keyboard through hotkeys. 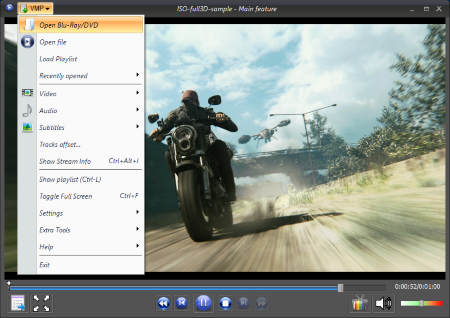 VSO Media Player is one of the best Blu ray player software for Windows. It is very easy to use. You will find add icons on the main interface to add a video, audio, blu ray disc, or DVD. You can also open a media file clicking on the VMP drop down list. It also supports drag and drop action. To play a blu ray disc or blu ray ISO, simply click on Add option and select the Blu ray file or ISO.

You can access settings to control brightness, contrast, saturation, etc. It also lets you manage a playlist. It remembers your media’s last position and can play video or audio from where you left it the last time. 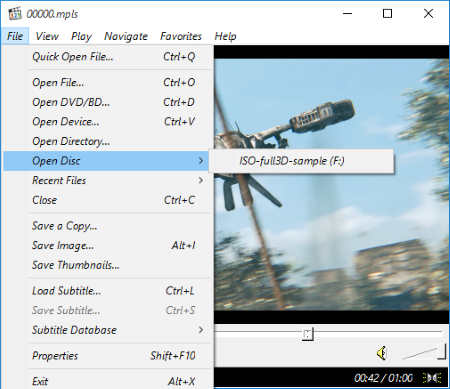 Media Player Classic – Home Classic is a free and simple Blu ray player for PC. You can easily open a Blu ray video through File Menu. Here you will find an option Open Disc which lets you select and play Blu ray disc or Blu ray ISO to play. 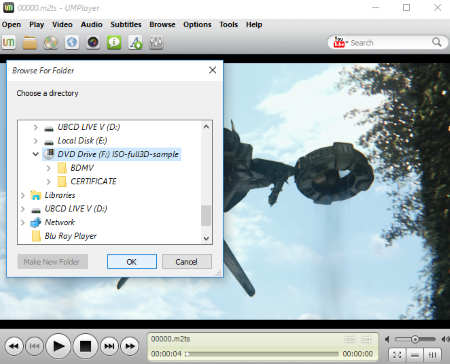 UMPlayer is a free cross platform Blu ray disc player software.  It lets you choose folder, drive, or directory to open a video. It can play Blu ray disc, Blu ray ISO, DVD, CD, web streams, TV, and Radio channels. Go to the Open menu, and select the Blu ray disc or ISO from your PC. 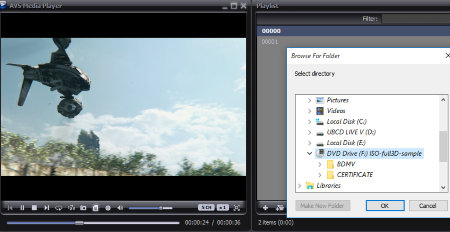 AVS Media Player is a free media player to play Blu ray on PC. It lets you play a Blu ray disc in simple steps. Simply Open the Blu ray disc or ISO to play it. To open videos on your PC, you just have to add directory to its playlist. It will automatically detect and add videos. Then you can enjoy them in a click. 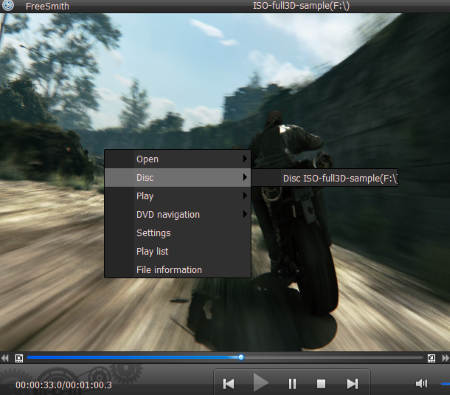 FreeSmith is a free Blu ray ISO player and Blu ray disc player. It also lets you play any local media files of your PC, DVD, and CD. You can open a BLU ray DVD from Open Disc option.

There are two ways to open Blu ray file on this freeware:

It can play videos with subtitles in various languages. You can also capture screenshot of videos. It lets you use hotkeys for shortcuts. Video effects like contrast, brightness, sharpness, etc. can be set. You can synchronize audio as well as subtitles with video and create your own playlist. It supports a wide variety of media formats, such as: MP4, AVI, M4V, WMV, 3GP, MPEG, MKV, FLV, MOV, F4V, H.264, AVCHD, etc. 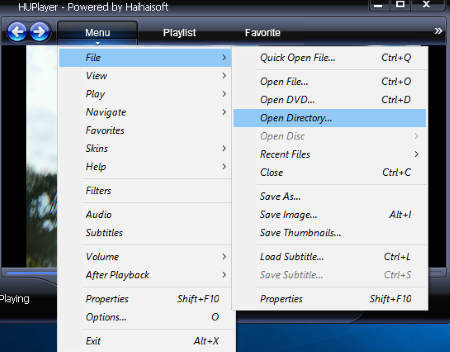 Haihaisoft Universal Player is a freeware to play ISO Blu ray on PC. It lets you play a local media file, DVD other than Blu ray disc. You can open Blu ray video through Menu >File >Open Directory. It will automatically detect and play videos from directory.

It can play multiple videos on multiple instances at a time. You can create your own playlist and a list of favorites. It can display subtitles for videos in various languages. You can control volume level. Its appearance skin can be changed in various forms like: ICeBlue, KMPlayer, MAC, QQPlayer, WMP, XMP, etc. 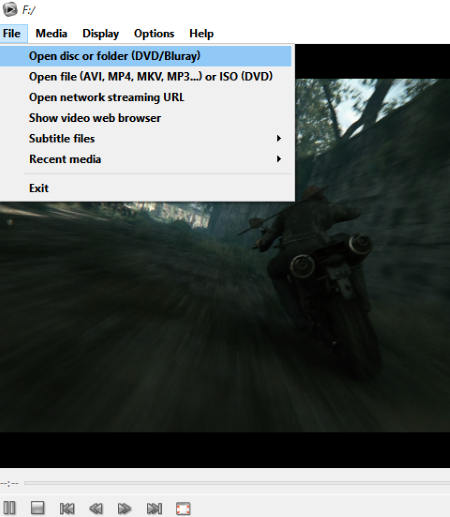 Free Player is another free Blu ray disc player. It lets you play Blu ray movie on PC. You will find Open disc or folder (DVD/Bluray) option under File menu to open a Blu ray or any DVD videos.

You can use back and forward buttons while watching video to change videos on the disc. Add subtitle files in various languages. It can also open any media file from the internet. It supports the following audio and video formats: MP3, MP4, MKV, FLV, WMV, AAC, DTS, Xvid/DivX, MPEG-2, H.264, etc. It is a cross platform freeware and available for Windows, Mac OS, and Linux. 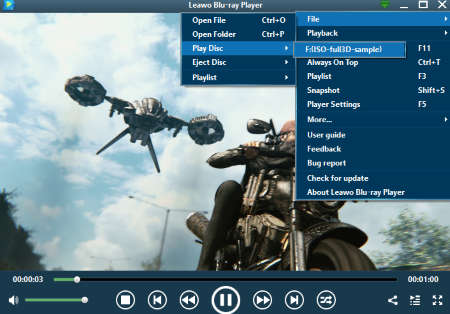 Leawo blu-ray Player is specially designed to play Blu ray disc  along with DVD, Videos, audio, HD videos, and ISO files. You can open Blu ray disc on computer by clicking on Home>File>Play Disc. It also shows menu to play disc and other media file on its main interface. 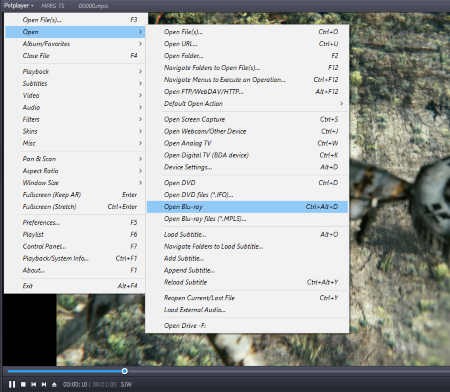 Pot Player is another freeware to play Blu ray on PC. It can play Blu ray DVD, ISO Blu ray, DVD, CD, and audio & video files on PC. You just have to right click, then go to Open>Open Blu ray option to play video on Blu ray disc automatically.

It lets you change various parameters while playing a video, like: audio parameters, video effects, subtitle, and playback. You can create a playlist of your choice and add subtitles in various languages. You can change settings for subtitle font style, font size, font color, etc. It has an option to display lyrics as subtitles for audio. It supports a wide variety of common media formats. 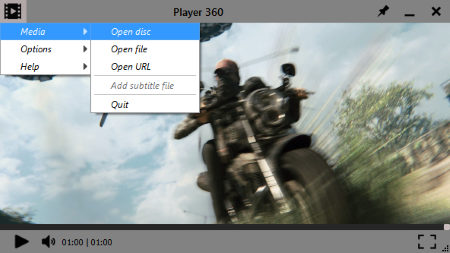 Player 360 is a simple and free Blu ray player softwsre. It lets you play, audio, video, DVD, and Blu ray Disc. You have to click the player icon>media>open disc, then select Blu ray DVD to detect and play the video automatically. You can also play blu ray ISO here.

This player has simple interface and contains only volume control and full screen toggle buttons. It supports a wide varieties of media formats such as MP3, MP4, MKV, WMV, DivX, WebM, MPEG2, etc.