This article contains a list of Best Free Emoticon Maker Software For Windows. Using these freeware, you can create emoticons on your own. For doing so, these emoji makers provides a good variety of component or objects. These objects include different types of circular faces, faces, noses, eyebrows, eyeballs, eyes, hand gestures, glasses, hats and other headwears, beard, hairstyles, etc. By placing these objects onto the provided editing window, you can create a personalized emoticon. Some of these can be used to create animated emoticons too.

These emoticon creator software let you further modify the emoticon. For this, you can move an object to correctly place it on the emoji, vary the size of object, change the canvas size, modify background color, etc. One of these let you create static or animated emoticon from photos.

To save emoticon, most of these support common image formats including PNG, GIF, JPEG, and BMP. You can also share created emoticon directly via Mail, Facebook, Twitter, etc. platforms.

Moji Maker is one of my favorite emoticon generator software. It is basically an emoticon maker app for Windows 10. It provides a wide range of objects to create a personalize emoticon and emoji characters. EmoteMaker is another favorite of mine as an emoji maker software because it lets you create static as well as animated emoticons.

EmoteMaker is a free, portable emoticon maker software for Windows. You can create custom emoticons of small, medium, and large sizes. Also, it lets you create animated emoticons.

It provides different sections on its main interface namely, Tools, Pallet, and Other Tools. While the first two sections are used to create emojis, latter section acts like a magnifying glass to zoom into the created emoticon. To start with, you can setup canvas size i.e. room size of maximum width 218px and height 144px, and also the background color. It provides various objects to use to add mouth, eyes, face, wears (glasses, hat, etc.), hold, etc. to an emoticon. You just need to drag and drop objects to Pallet section in order to create desired emoji. These objects are available for all sizes of emoticon. It also lets you add captions to the emoticon. You can move the text and place it to desired location.

It provides a Random Generator button which generates a random emoticon with selected objects.

After creating emoticon, you can save it in the format of BMP, JPEG, PNG, or GIF.

How to Create Animated Icons:

EmoteMaker is a nice static and animated emoticon maker software. You can load skin file and language file to customize its interface. 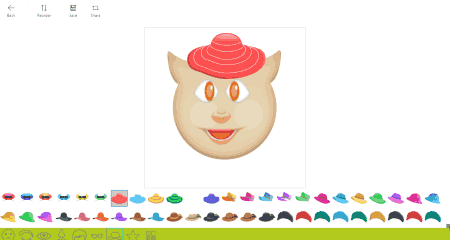 Moji Maker is a free emoticon maker app for Windows 10. You can create emoticons and 2D/3D character emoticons using it. It provides a wide range of component groups to make emoticons, such as face, eyes, brows, eyeballs, nose, mouth, beard, smileys, glasses, headwear, hand gestures, hairstyles, etc. Just select an object and it will be placed in the editor window. You can then adjust its size and position. You can also reorder components by using Reorder button.

Moji Maker is a nice and fun emoticon maker app. Using it, you can create numerous personalized emojis and characters.

Emoji Maker is another free emoticon creator app for Windows 10. It lets you create static emoticons by using various components.

In order to create interesting and fun emojis, just follow below steps:

As you finish making customized emoticon, you can save it as a JPEG or PNG image file. A Share button is also available, but it didn’t work fine while my testing.

I personally enjoyed creating emoticons with this emoticon generator. It is a simple yet fun app to make personalized emoticons.

Emoticon Creator is another one of free emoticon maker software for Windows. Like other software in this list, it also provides various objects to create your own emoji. These objects include face, eye color, hat, accessories, beard, and skin. As compared to other software, it provides a few basic components to add to an emoticon. Corresponding to an object, you can modify RGB parameters and the brightness of the emoticon.

The preview of the emoji is displayed in a different window. You can zoom in/out the created emoticon. At last, you can save the zoomed emoticon or the original one as a sprite file (PNG).

Emoticon Creator is a basic emoticon maker with a simple user interface.

Emoticon Maker, as the name implies, is yet another free emoticon maker software for Windows. It can be used to create emoticon from photo. Also, it is capable of creating static as well as animated emoticons.

It has a very user-friendly interface. If you want to create emoticons from photos, you should go for Emoticon Maker.

Emoticon Art Editor is a different kind of emoticon maker software. It basically lets you create an art using various emoticons. Some generic emojis are provided in it which you can select to place in the editor window. This way, you can create an art with multiple emoticons.

How to create an emoticon art:

Open Emoticon Art Editor and go to File > New and select number of emojis per row (up to 40) and column (up to 30). After that, select an emoticon and start drawing on editor section with that emoticon. You can place different emoticons in your emoticon art. The final emoticon art can be exported as an image (BMP, JPG, PNG, GIF) or HTML file.