Here is a list of best free game making software for beginners for Windows. These software require little to no knowledge of coding in order to create games. All of these follow a WYSIWYG approach to design a game. These provides various game objects and control options which can be directly used to create games. Also, some sample games are provided in these which can be used as reference. You can make games for Windows, Linux, Mac, iOS, and Android platforms or even publish games on the web.

In these software, you can make various types of games, such as Facebook instant games, text adventure games, device vibration, device sensors, physics behavior, draggable behavior, primitive drawing, etc. To create a game, you can add objects, scenes, actions, events, etc. and build up game logic. All these tasks can be performed in Live Editing mode. You can easily drag and drop components and build an entire game. After making a game, you can build and run it with/without debugger. And finally, you can easily export it in supported formats.

My favorite Game Making Software for Beginners for Windows:

Clickteam Fusion is one of my favorite software free to create games. It is very simple and provides all essential tools required to build a game. I also liked GDevelop because it provides various game templates which can be used in the creation of different kinds of games.

You may also like some best free Map Maker For Games, Sprite Sheet Maker Software, and Jigsaw Puzzle Maker for Windows. 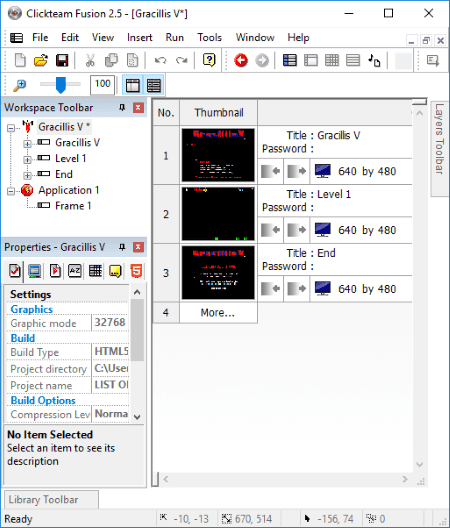 Clickteam Fusion is a free game making software for beginners. You can create HTML5 games as well as apps using this software. In it, you don’t need to write codes in order to create games. It follows WYSIWYG approach to let you make games for the web. You can insert multiple frames and add objects to the frames to create a whole game. It contains a library of objects which include graphics and animations, games, counter, HTML5, backdrop, button, combo box, sub application, physics (engine, fan, magnet, particles, rope and chain), question & answer, string, etc. You can edit each object in a different window. A Properties dock window is provided to enter properties of an object or frame including settings (based on object), text options, movement, runtime options, values, events, and about. It lets you arrange objects using options like order by, align in frame, flip, lock, unlock, etc. As you are done creating a game, you can Build and Run it and save the game project at a desired location. Its interface is simple and intuitive. You can find various toolbars and menus to easily create a game. It provides Workspace, Properties, and Layers toolbars to manage a project and its components.

Note: In the free edition of this software, you have some limitations like number of objects to use are limited. You can buy its other versions to remove such limitations.

Clickteam Fusion is a good game making software for beginners. The WYSIWYG editor with free artwork library makes it easy to get started. The free version does have limitations but it is good enough to create small games and apps. 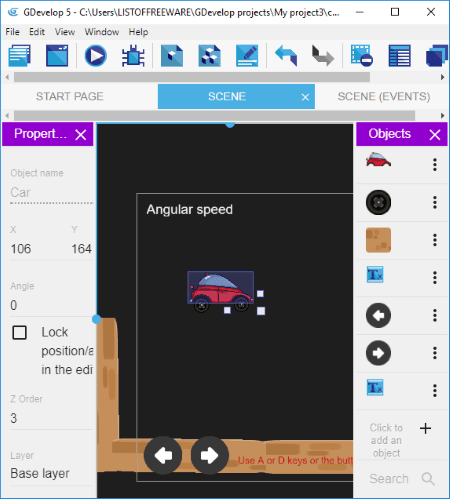 GDevelop is another free game making software for beginners. In it, you can create platformer, space shooter, isometric, etc. types of games. You can also start creating a game from given example library. These examples are divided into categories like device vibration, device sensors, physics behavior, draggable behavior, primitive drawing, Facebook, instant games, etc. After choosing type of game, you can easily drag and drop related objects and build up scenes. For example, for primitive drawing game, you get objects like tiled sprite, shape painter, text entry, particles emitter, etc. It lets you add events (comment, JavaScript code, repeat, standard event, etc.) to a scene which are composed of various actions and conditions. You can add actions like movement, behavior, rotate, animations, effects, mouse and touch, play a sound, next or previous scene, quit game, timers, platform behavior, linked objects, vibration, physics behavior, etc. It lets you add external layouts too.

GDevelop is a really good game make software free to get started. Its visual editor and asset store make it easy to start building. And with help of community extensions and built-in assets, one can easily make a game. And, at some point, if someone wants to step up a level then Piskel editor is right there to design custom assets. 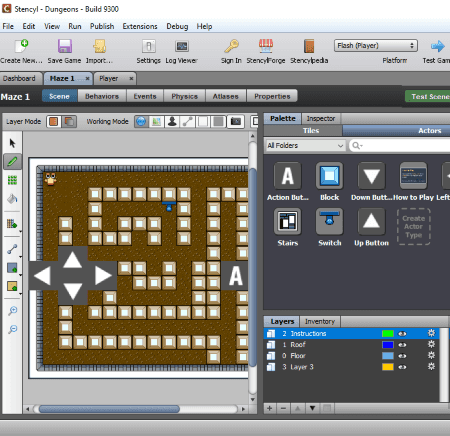 Stencyl is a free game making software for beginners. You don’t essentially need to learn to code for creating games in it. It provides all sufficient tools which can be used with mouse clicks to make a desired game. If you want to create a game through codes, you can do that too. Some sample games can also be downloaded and used as reference.

You can start creating a game by specifying general settings like screen size, game logo, control keys, etc. You can then use various resources to add to your game including Actor, Background, Font, Scenes, Sound, and Tilesets. Next, you can edit properties of added resources. For example, you can edit appearance, behavior, events, collisions, physics, etc., properties of an actor, add images as background, configure scenes, etc. You can also create game logic like actor behavior, scene behavior, etc. After setting up game configurations, you can compile and test the game.

Stencyl is one of the simple game maker software free. The drag and drop editor with the ability to import libraries for custom actors makes it good enough to create small games. 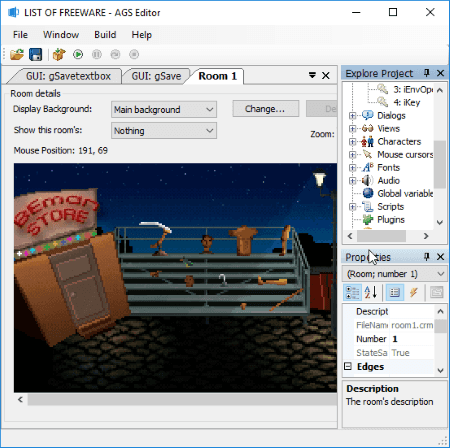 Adventure Game Studio is the next free game making software for beginners for Windows. In it, you can create a game by using some inbuilt templates like 9-verb MI-style, Sierra style, Verb coin, etc. Or, you can start from scratch to create a new game. In it, you can find Explore Project window at right. This window lets you setup game objects, scenes, and game logic. From here, you can setup character movement, inventory, sound, text output, display, GUIs, audio, sprites, room script, etc. You can import GIF frames to sprites, customize properties of each item, import background image, create and animate characters, create multiple views, etc. After making game, you can run it with or without debugger and build its EXE file. You can also view game statistics, auto number speech lines, etc.

AGS is a decent game maker software free for Windows. It is a simple yet complex editor. If you don’t get easily confused managing dozens of folders for assets and characters then maybe this software can work for you. 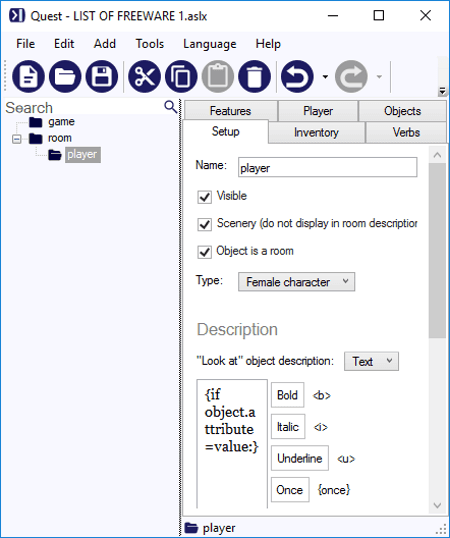 Quest is another free game making software for beginners. This software can be used to create gamebooks and text adventure games. It is suitable for beginners as it doesn’t require coding and has an intuitive approach to make a game. But, you can also write code to create a game.

Quest is a free game-maker software for text-based games. With a simple and neat interface, users can create their text adventure game in a storytelling format. 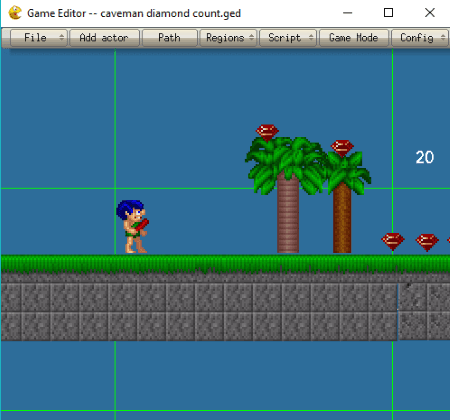 Game Editor is a free portable game making software for beginners. It is a very basic game maker, so beginners can use it to create simple games. It provides many sample games which you can refer to. You can add actors, customize actor controls like add animation, add events (draw actor, collision, path finish, timer, etc.), transparency, etc., lock actor, etc. It lets you add path control, activation region, view scripts, etc. After you are done creating a game, it lets you export a game for different platforms including Windows, Mac, Linux, GP2X, Pocket PC, etc.

Game Editor is the simplest game making software for beginners on this list. It is good and easy enough to create 8-bit style games that can export for various platforms.