All in all, the mentioned software will prove out to be helpful if you are looking for a solution to find out read and write speeds of your hard drive. Some of these HDD speed test software also provide real time, average, maximum, and minimum real and write speeds.

So, go ahead and checkout the brief description of these software to select what suits you the best. Also let us know, if you know any better hard drive speed test software than these.

I like ATTO Disk Benchmark the most, as it lets you define the test file size, and select the memory block range to subject hard drive for speed test. Along with comparative read and write speeds of hard disk, it also displays graphical representation, so that it would be easy for you compare result for different memory blocks. 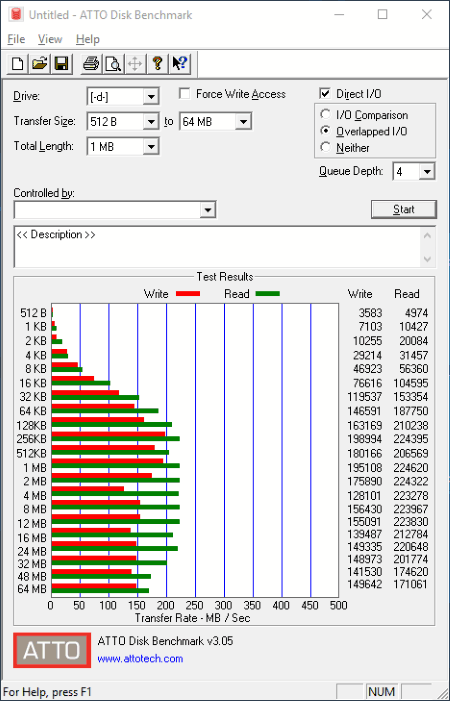 As you can see in the above image, this HDD speed test software lets you select the drive, data transfer size range, and the size of test data. Once you begin the test, it takes a while to complete the test, and test results for various data transfer rates are displayed one after another.

If you want, you can either save the test result as .bmk (benchmark result) file or take a print out. 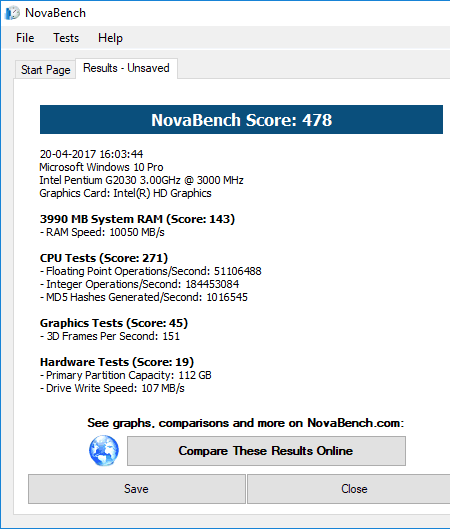 You also get an option to save the test result in .nbr (NovaBench Result) format.

Its a pretty simple yet useful software that can be used as a HDD speed test software. 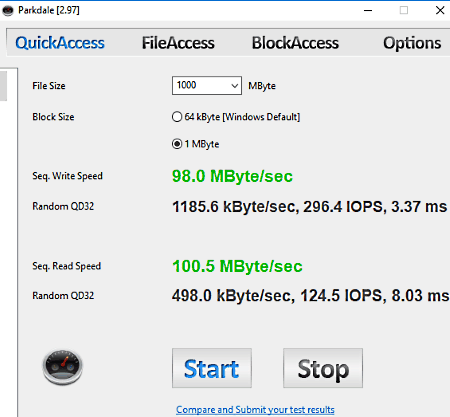 Parkdale is a dedicated and free Hard Drive speed test software. It runs test on your HDD to display Write and Read speeds in MB/sec. There are 3 test modes that can be used to determine read and write speeds.

Let us know about these test modes:

Parkdale is also available for Mac and Android OS. 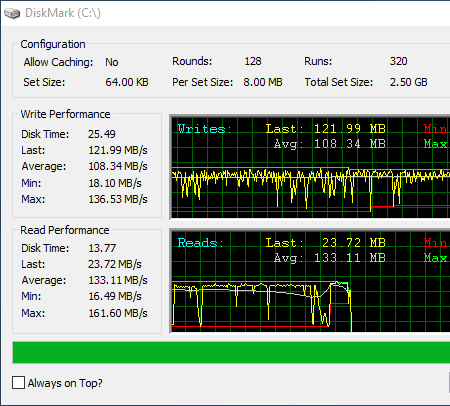 Graphical representation of read and write statistics is also displayed. This helps you with a careful analysis of test data.

It is a simple HDD speed test software with not many advanced options. Option to save or print data would have been a great addition to this freeware. 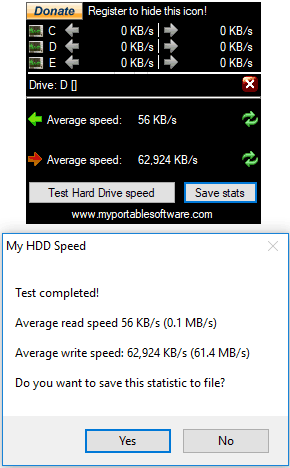 If you want to save the test result of this hard drive speed test software, an option to save the snapshot of recorded data is displayed after the test is complete. 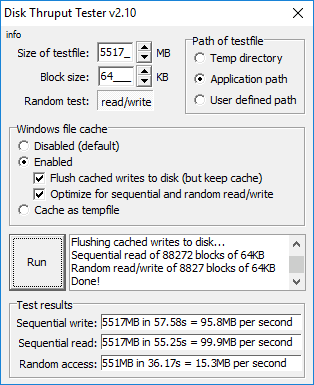 Once the test is finished, read and write speeds are displayed in MB/s along with RAM usage.

Although the options to save or print test results are missing, this freeware does what it promises. 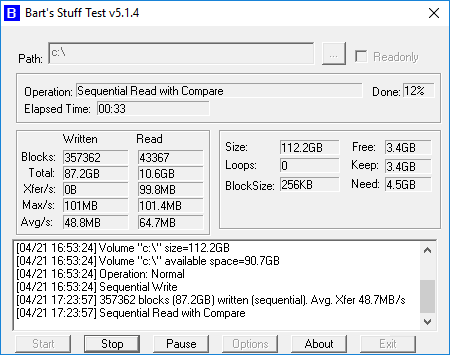 Bart’s Stuff Test is an old but very well known hard drive speed test software. A hard disk drive can be selected to find read and write speeds. As you begin the speed test, it starts processing data for predefined values of test file and block size. Total number of blocks, size of data, real time speed, maximum speed, and average speed are displayed for Read and Write operations. Data log can also be viewed on the interface.

One of the options lets you only commence the test for hard drive read speed.

As you can see in the above picture, the interface is pretty neat and displays test results in easily understandable manner. 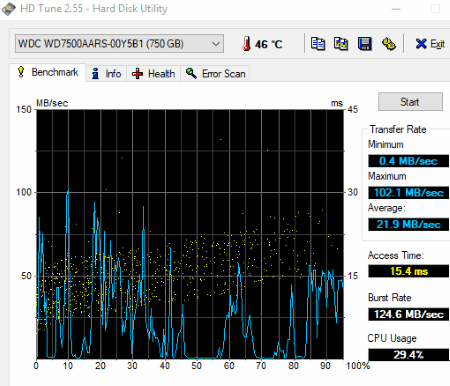 The free version of HD Tune lets you test and view hard drive read speed. You can also view detailed Hard drive info and scan it for errors in the free version. Minimum, maximum, and average HDD read speeds are displayed along with a graphical representation of hard drive read activity. Additional info, such as HDD temperature, access time, burst rate, and CPU usage are also present on the interface.

You can save the test result on your computer as an image. 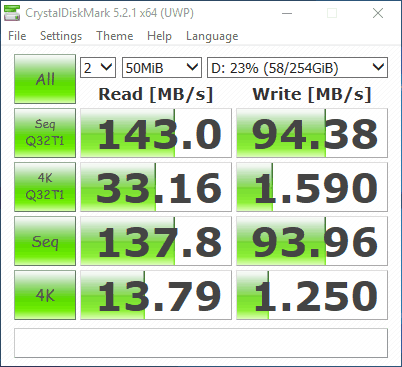 CrystalDiskMark is a dedicated hard drive speed test software for Windows. It lets you select and test a specific drive for speed test. You are allowed to set test file size and block size for file transfer. Several tests are run and result is displayed for read and write speeds for Sequence and 4K data with/without queue depth of 32 in MB/s.

Its pretty simple and easy to use freeware, and does not comes with many advanced features. Test result can be saved in TXT format. Option to change interface theme is available. 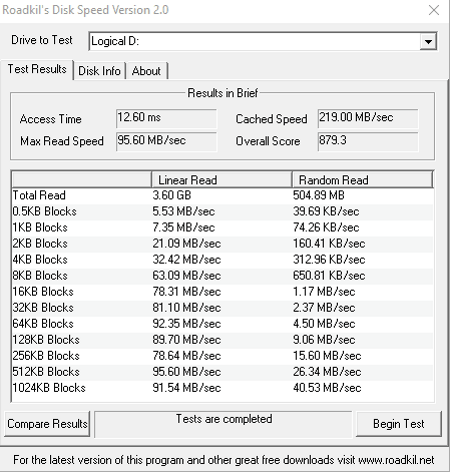 Roadkil’s Disk Speed is another free HDD speed test software for Windows. It can be used to test overall hard drive read speed. It displays Linear Read Speed and Random Read Speed for different memory blocks. The memory blocks for which HDD read test result is displayed, ranges from 0.5KB to 1024KB. Along with the read speed, a brief result is also displayed. Here, you can view access speed, cached speed, max. read speed, and overall score.

You can activate or deactivate the HDD monitor floating interface from the View menu. 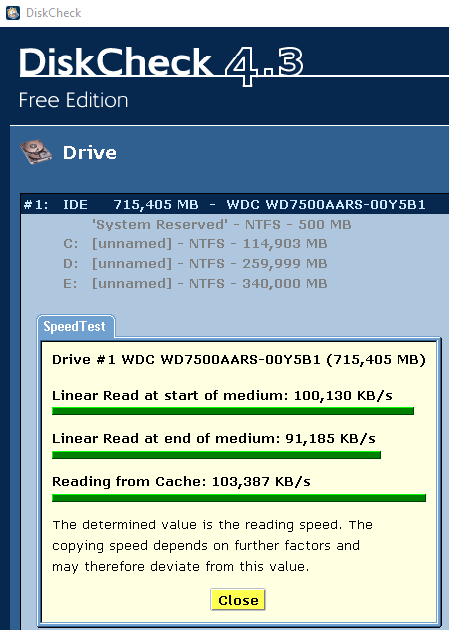 Other options available let you view disk sectors and respective data. The MultiTest option runs speed test on drivers and flash drives connected to your PC.

If you just need the hard drive read speed, then this hard drive speed tester software can be a good option for you. 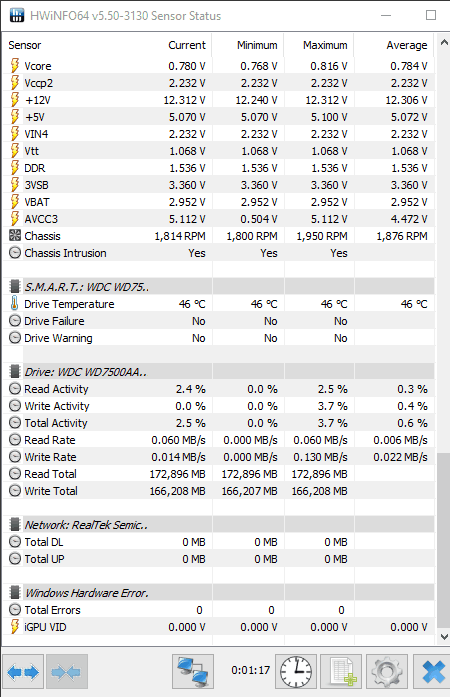 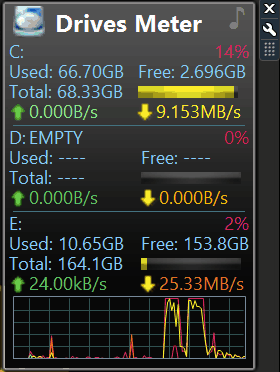 GPU Monitor is primarily a software to monitor graphic card performance and statistics. You can utilize it to monitor hard drive read and write speeds and statistics of various other components of your PC. All of this info is displayed on a visually attractive interface. By default, it displays GPU statistics on its interface. You can customize its interface from the options menu to display hard drive info along with other info.

In separate sections, you will be able to view statistics of various drives of your hard disk. For each drive, it displays real time read and write speeds in MB/s. Also, the read write statistics are displays in a visual form.

The interface of this software places itself on the right side of your desktop, keeping it easy for you to always keep an eye on your computer’s performance. 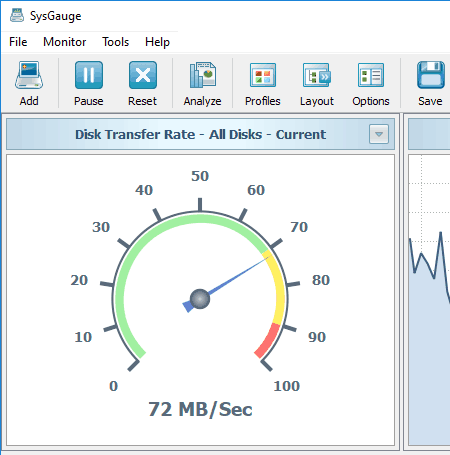 SysGauge is another computer performance analysis software for Windows, which can be used to test Hard drive speed. It displays overall HDD data transfer speed, which includes read and write speeds. It displays current speed, average speed, minimum speed, and maximum speed of hard drive transfer rate. You can also view a graph of disk transfer activity for last minute. 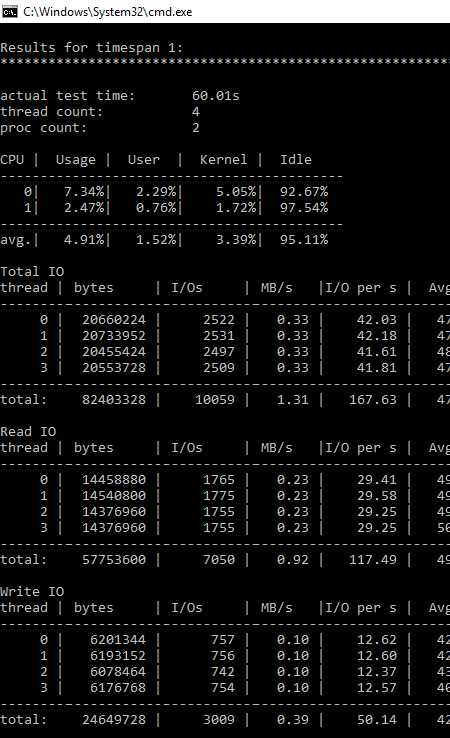 Diskspd Utility is a command line Hard Drive speed test software for Windows from Microsoft. You can define hard drive speed test parameters in the command to run test and it displays an extensive test result. It displays read and write speeds of hard drive in MB/s and I/O/s. there are various parameters that can be set in command to get test result accordingly.
You can set the size of test file, block size, time to run sequence, i/o threads, target disk, etc.
Few good command examples have been provided on the home page of this software, and it rendered disk read and write speeds for my PC pretty easily. I used the following command: Diskspd.exe -b256K -d10 -o8 -t4 -a0,1 #9
All you need to do is, open Command Prompt and navigate to the folder where this tool has been downloaded. Now run the command to get the read and write speed of hard drive right in front of you.
You will also find command help in a user manual, that downloads with the exe file of this software.
Home Page
Download Page
Windows
Related Posts
Write a Comment