Some of these editors are proper IDE with support projects means you can easily manage your coding projects and open multiple files side by side. The other editors offer a tree-view of the directory so you can easily jump back and forth between files. Additionally, each editor offers its own feature set including macros, themes, built-in package manager, advance search and replace, snippets, and more.

Notepad++ is my favorite open-source text editor for Windows. It is lightweight and fast. Notepad++ has a simple interface with all the main features right on the screen. It is good for regular text and also supports many programming and markup languages as well. And it also packed some powerful features such as search with regular expression, macros, tabbed document interface, split editing, and more.

Also check out our list of free Alternatives to Notepad++, Spell Check Software, and Lightweight Code Editor Software for Windows. 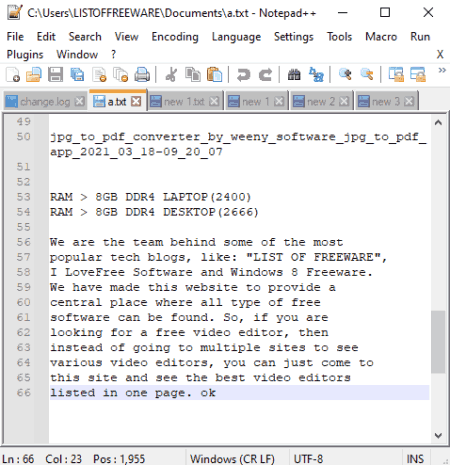 Notepad++ is a free open-source text editor for Windows. This editor packs many useful features in a simple interface. The UI looks just like any other text editor but with more features added to the top. It is a good editor for regular writing where users can open multiple files in a tabbed interface. It automatically saves the file within the editor. In case you close the editor without saving your data, it stays there when you open the editor again. Apart from regular text files, Notepad++ can also handle various markup and programming languages with syntax recognition. And, it also supports macros to automate operations.

Notepad++ is a really nice text editor for Windows. With a UI as simple as Windows Notepad, it offers many useful features on top. 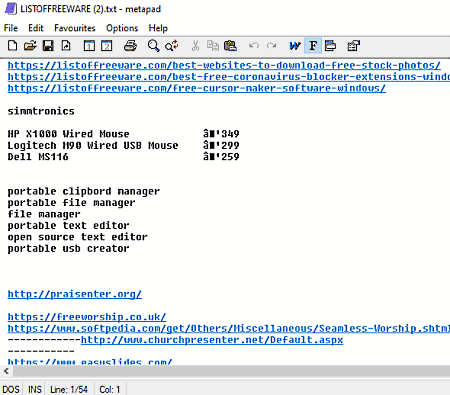 Metapad is another open-source text editor for Windows. It is quite similar to Microsoft Notepad in terms of design and layout. But Metapad packs many useful features that are not present in the Microsoft Notepad. It has intelligent find and replace and supports dual customizable font. Unlike Notepad, there is no file size limitation and it also supports hyperlinks.

Metapad is a nice alternative to Microsoft Notepad with some more functionality added on top. 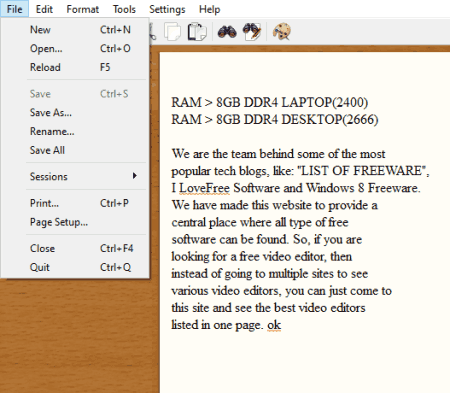 FocusWriter is an open-source text editor for Windows and Linux. It is a minimalistic editor designed to help users focus on their work. This editor offers a plain background without any options or menu offering a minimalistic editor to help users concentrate. It supports regular text files with additional features such as daily goals, timer, alarm, typing sound effects, and themes to change the interface.

FocusWriter is designed for writers who need a clutter-free environment just for writing. It can make the writing fun and engage with sound effects, timer, and daily goals. 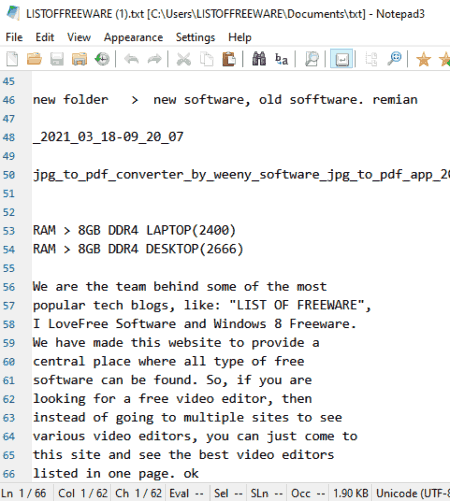 Notepad3 is a free open-source text editor for Windows. It is a fast and lightweight text editor. Notepad3 is designed to be an alternative to Windows Notepad. It offers a handful of features in a similar interface that Windows Notepad lacks. It supports various programming, markup, and command-line languages with syntax highlights.

Notepad3 is a good open-source text editor that offers versatility over Microsoft Notepad. 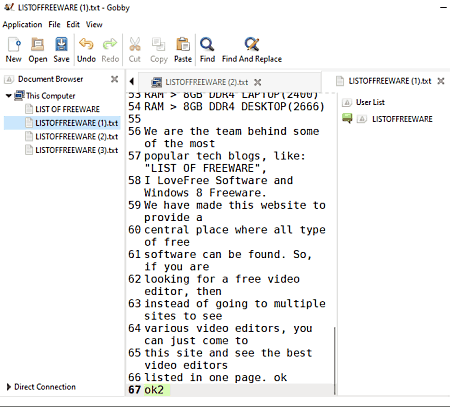 Gobby is a simple text editor with collaborative editing. It can be good for a team that has to work on the same file simultaneously. 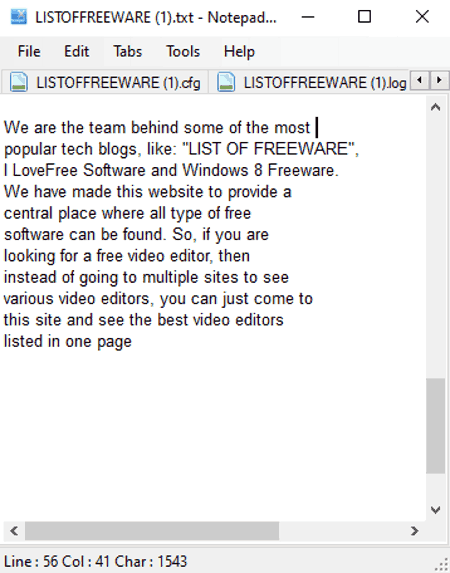 Notepad X is another free open-source text editor for Windows. This editor has a similar interface to Microsoft Notepad with a toolbar at the top. The toolbar is customizable. Users can configure the toolbar to have the necessary functions and hide the rest. This editor supports various programming languages and highlights the syntax of those languages in the editor. Similar to Notepad++, it can open multiple documents simultaneously side by side in a tabbed view. Additionally, Notepad X has plugin supports that lets users add new functionalities to the editor.

Notepad X is a good text editor that comes with a familiar interface. It is a nice fit for general writing as well as programming. 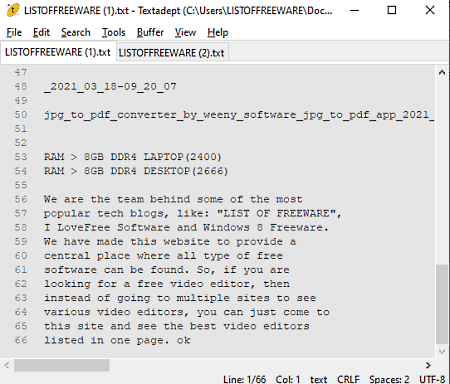 Textadept is an open-source text editor available for Windows, macOS, and Linux. It is a minimalistic code editor that supports many programming and markup languages. With the Lua programming language, users have full control over the editor to change menus, bind keys, and more. It can open multiple files side by side in a split view to keep everything on screen. Additionally, Textadept comes with several customizable themes to change the appearance of the editor.

Textadept is a lightweight and fast text editor that can be a nice fit for light to regular programming needs or to quickly edit files. 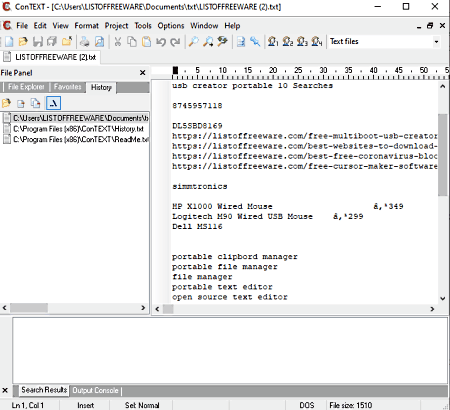 ConTEXT is another open-source text editor for Windows. It is quite similar to Notepad++ in terms of interface and functionality. The conTEXT supports various popular programming and markup languages with syntax highlight. Users can also create custom syntax highlighter. Unlike Notepad++, it has project support with code templates and can compare files as well. It supports text sorting and multiple text selection along with advance search and replace with regular expression.

ConTEXT is a powerful text editor that packs many unique features in a simple and small package. It is a good fit for general writing and mediocre programming needs. 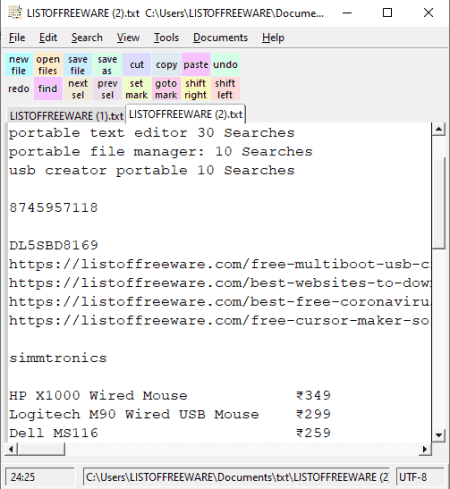 fxite is an open-source text editor with cross-platform compatibility. Along with Windows, it is available for macOS and Linux as well. This editor has a very clean and simple interface yet packs many useful features. It supports 40+ programming and markup languages and can recognize the syntax while typing. It packs Lua scripting engine that can be used to record and playback macros. fxite has a message window to capture the commands and monitor errors. On top of that, it features search and replace with a multi-line regular expression and can also integrate external tools.

fixit a fully-featured text editor that comes in quite a simple interface. It is great for working with multiple programming languages. 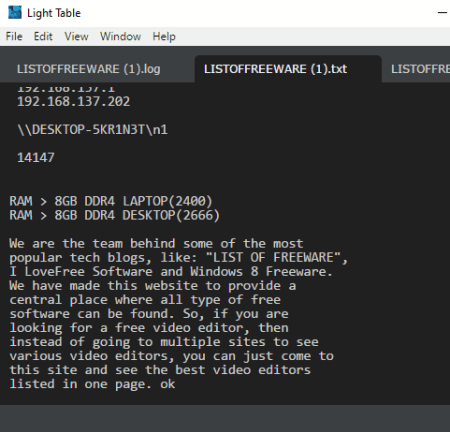 Light Table is a free open-source text editor available for Windows, macOS, and Linux. This is a lightweight IDE that brings a modern interface with many programming-orientated features. With its extension supports, users can easily customize the interface and support for more programming languages. In terms of features, it has a split view to open multiple files side by side and offers inline evaluation for all supported languages. Light Table can be integrated with Node.js, JavaScript, Adobe Dreamweaver, Adobe Photoshop, WakaTime, etc. and users can add more with the help of extensions.

It is a lightweight editor packing many unique features in a modern and elegant interface. It is a great IDE for beginners. 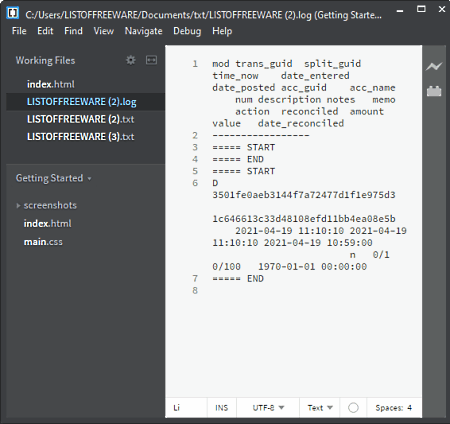 Brackets is an open-source text editor for Windows. This text editor supports various markup and programming languages with syntax recognition. Users can also add compatibility for more languages through the extensions. This also includes integrations with Git, GitHub, and much more. One of the unique features of this text editor is multiple text selection methods. This includes column selection, block selection, and non-linear selection. Brackets also supports collaborative editing that allows users to work on the same project together remotely.

Brackets is a nice text editor for web designers as well as developers. Unfortunately, Adobe is ending support for Brackets on September 1, 2021. But people can still fork the project on GitHub to keep using, maintaining, and improving Brackets. 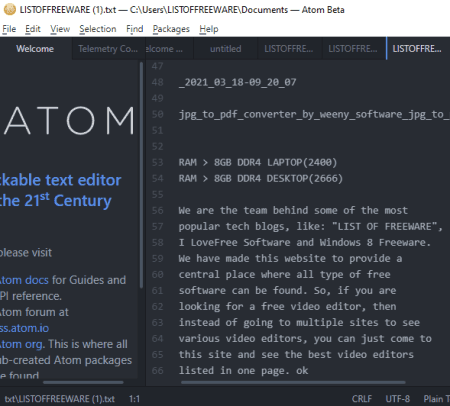 Atom is a powerful open-source text editor developed by GitHub. This editor has built-in integration for Git and GitHub that lets users easily fork code and projects from those sources without leaving the editor. On top of that, it features a built-in package manager to extend the functionalities of the editor and add support for more programming environments. Apart from that, Atom supports projects with a document map on the side. It can open multiple files side by side in a multi-pane view and find and replace text across projects.

Atom is a versatile text editor that already comes with many handy features for web designers and programmers. With a built-in package manager, it can be an easy fit for various types of projects. 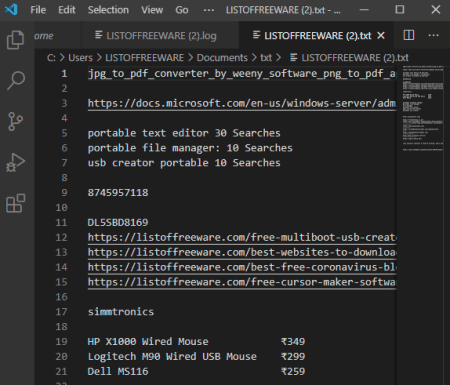 Visual Studio Code is a free open-source text editor by Microsoft. It is basically an IDE that supports various programming and markup languages with features like syntax recognition, autocomplete, etc. Visual Studio Code is for programming purposes and it comes with many useful features in that area. It has IntelliSense that offering smart autocompletion of the code for hundreds of programming languages. It has built-in Git commands and can debug the code within the editor. On top of that, it features an Integrated Command Line Interface with multiple terminals.

Visual Studio Code is one of the best text editors for programming purposes. It has lots of features built-in right into the editor with extensions to add more on top. 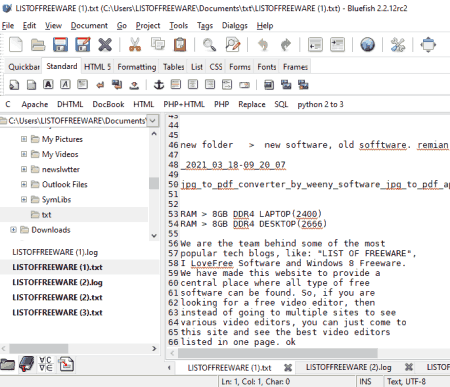 Bluefish is another open-source text editor for Windows. This is a cross-platform editor available for macOS and Linux as well. It supports various popular programming and markup languages and comes with a syntax aware spell checker. Bluefish has project support means users can easily manage their coding projects and open multiple files at once in a multi-pane view. This editor comes with many programming-related features included support for remote files, snippets, advance search and replace, etc. Additionally, it can also be integrated with external programs and filters to extend the functionality of the editor.

Bluefish is a really nice text editor designed with Linux users in mind. The UI comply with  KDE and Gnome UI guidelines offering a familiar interface. 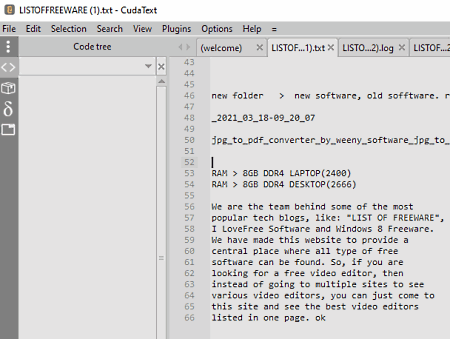 CudaText is a cross-platform open-source text editor. This is another IDE specially designed with programming needs in mind. This editor has syntax recognition supports for over 250 programming and markup languages. Depending on the programming language, it can create a code tree of the file and open multiple files in tabbed UI. IT also supports multiple selections that allow users to change multiple lines simultaneously at once. On top of that, users can add more functionalities by installing a plugin that includes project manager, macro manager, spell checker, FTP panel, color picker, menu configurator, external tools, and more.

CudaText is a good open-source text editor for web designers. It packs many handy features for HTML/CSS coding to make the web designing experience a bit smoother.