Here is a list of Best Free TIFF to DXF Converter Software for Windows. These software let you convert designs saved in Tagged Image File Format (TIFF) to AutoCAD Drawing eXchange Format (DXF). You can basically convert raster to vector images using these free software. Besides DXF, more output formats are supported in these to convert images, such as EPS, EMF, WMF, DWG, PDF, SVG, etc. Also, as input, these support many other formats apart from TIFF like PNG, BMP, JPG, etc. One of these also supports 3D models to view, edit, and convert, e.g., 3DS, FBX, OBJ, etc.

While most of these support one single conversion at a time, one of these also lets you batch convert TIFF to DXF. You can also edit TIFF image before converting it to DXF. To do so, a variety of tools including drawing tools (shapes, freehand, line, etc.), scale, rotate, crop, filters, extrude, edit texture, and many more are offered by these software. You also get various additional tools in these such as screenshot capture tool, drawings audit tool, Gcode generator, and some more. In general, these are quite useful software that also let you convert TIFF to DXF without much hassle.

My Favorite Free TIFF to DXF Converter Software for Windows:

pCon.planner is my favorite software on this list as it supports a wide number if input and output formats. It also provides a lot of design and rendering tools which you can use to create variety of models.

I also liked WinTopo; it is nice and easy to use.

You may also like some best free DWG to SVG Converter, PNG to DXF Converter, and DXF to PNG Converter software for Windows. 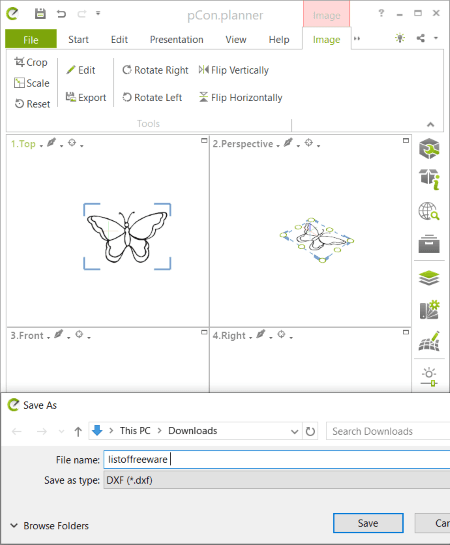 pCon.planner is a feature rich 2D and 3D space designing software that can also convert TIFF to DXF. It is a clean and intuitive software using which you can view, create, edit, and convert 2d and 3D models. You can simply open a raster TIFF image and convert it to vector DXF format. You can also convert design present in TIFF image to DWG, 3D file formats, and various image formats.

It lets you edit source design before conversion to another format. You can use dozen of designing tools to do so, such as Polyline, Arc, Rectangle, Cuboid, Text, Layers, Material Editor, 2D Crop, Rotate, Scale, Extrude, Edit Texture, Fill Color, and many more. After making modifications, you can start conversion of TIFF to DXF format. Let us checkout the procedure to convert TIFF or any other image file to DXF format.

How to convert TIFF to DXF in pCon.planner:

It is one of the best TIFF to DXF converter which provides high quality output as compared to other listed software. Plus, it can be used for a wide number of purposes in context of drawing. 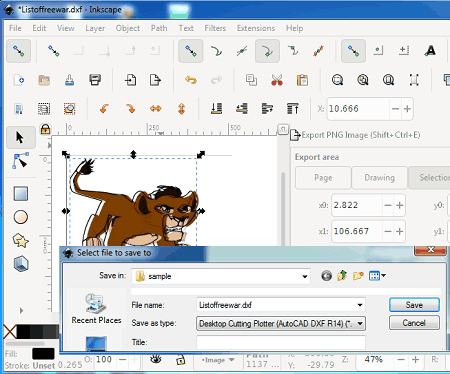 Inkscape is an open source vector graphics designer that also lets you convert TIFF to DXF. It lets you simply import a TIFF image that you can export to DXF format in a few steps. Prior to conversion, you get the flexibility to view, analyze as well as edit TIFF image as per your requirement. It provides plenty of tools to do so. Plus, you can convert TIFF to a lot more other formats that include PostScript, PDF, SVG, EMF, WMF, etc.

In order to make changes to input TIFF image, it provides tools like freehand and other drawing tools, create 2D/ 3D shapes, add/ manage individual layers, tweak objects, edit paths, spray objects by sculpting, calligraphic, gradients, fill color, etc. Furthermore, it contains a lot of filters to apply over a graphic. When done editing, you can export TIFF to DXF without much hassle. Let’s have a look at the steps of conversion.

How to convert TIFF to DXF in Inkscape:

Inkscape is a great image editor which anyone can use to convert TIFF and other raster images to DXF format in few simple steps. 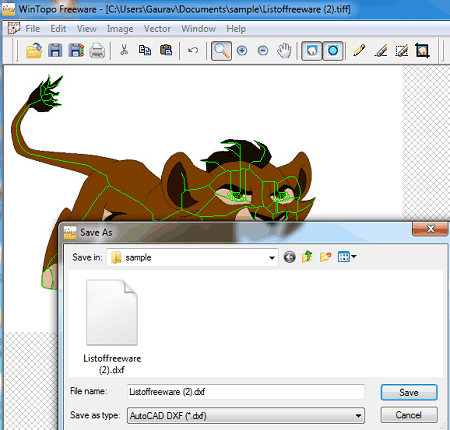 WinTopo is another free TIFF to DXF converter software for Windows. You can convert several raster images including TIFF, JPG, BMP, and GIF to DXF vector image format. It also supports various other output vector image formats including SHP, ARC, WMF, EMF, etc. It basically vectorize an image and then convert it to DXF file.

How to convert TIFF to DXF using WinTopo:

It is a good raster to vector converter that can also convert a TIFF image to DXF format with ease. 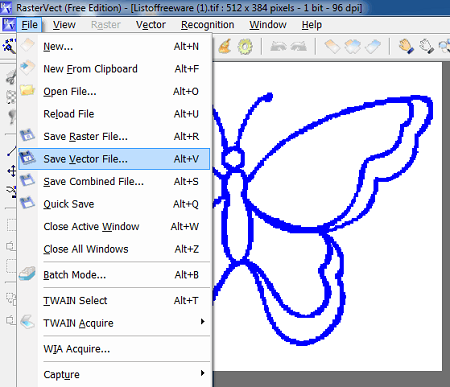 RasterVect is yet another TIFF to DXF converter software for Windows. As its name suggests, it is specially designed to convert various raster images (PNG, TIFF, JPG, BMP, raw images, etc.) to multiple vector file formats (DXF, EPS, EMF, WMF). It supports different versions of DXF file that you can choose as output as per your need. These versions include DXF 2002, DXF R12, and DXF R14. Another good thing about this software is that it supports batch TIFF to DXF conversion. You can simply import a set of TIFF images to it and then convert them all to DXF at once.

Now, let us see how to convert multiple TIFF images to DXF format.

How to batch convert TIFF to DXF using RasterVect:

It contains a few limitations which you can remove by upgrading to its pro version.

RasterVect is a good batch TIFF to DXF converter software to quickly convert bulk of TIFF images to DXF and other vector graphics formats. 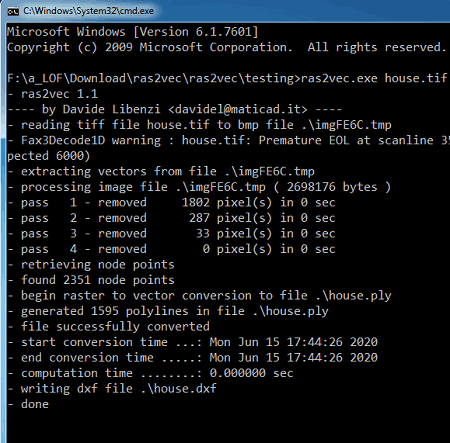 How to convert TIFF to DXF using command:

It is a nice command based TIFF to DXF converter that lets you quickly convert a TIFF or BMP image to DXF file format.