Here is a list of best free WebP to SVG converter software for Windows. Using the listed free software, you can easily convert a WebP image to SVG image format. In some software, you can even batch convert multiple WebP files to SVG format at a time.

WebP and SVG are two completely different types of image formats. WebP is an internet media type image format and is used in webpages to represent visual content. The advantage of WebP images is that it comes in both lossy and lossless compression configuration and takes very less space in memory. SVG, on the other hand, is an XML based vector image format that represents 2-dimensional images. It has multiple advantages over WebP format such as easily editable, SEO friendly, etc. So, in case you want to convert WebP images to SVG, you need a software which supports WebP to SVG conversion listed on here.

Some of these software also provide various image manipulation and transformation tools through which you can enhance and edit input WebP images. Tools like color correction, crop, rotate, brightness controller, image filters, etc., are available in most of these software. Apart from WebP and SVG, these software also supports other image formats like JPG, BMP, PNG, JFIF, TIFF, PCX, PSD, etc. The process of conversion is pretty straightforward in all software. I have also included the steps to convert WebP images to SVG in the description of each software. You can go through the list to find your favorite software.

My Favorite WebP To SVG Converter Software For Windows:

RealWorld Paint is my favorite software because it allows you to edit as well as convert WebP image to SVG. Plus, you can also use it to perform conversion between other image formats as it supports a lot of them.

Converseen is another good software as it can convert multiple WebP images to SVG format at once.

You can also check out lists of best free WebP to GIF Converter, WebP to PNG Converter, and WebP to JPG Converter software for Windows. 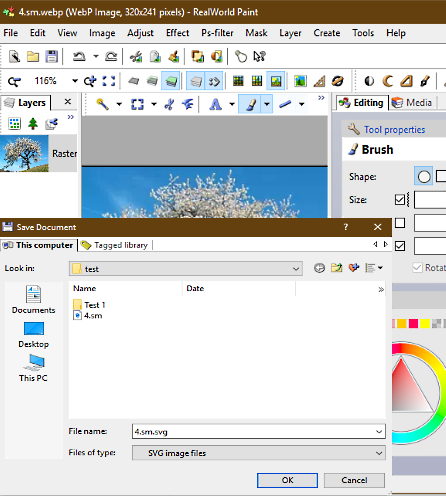 RealWorld Paint is a free WebP to SVG converter software for Windows. It is an easy to use software to convert a single WebP image to SVG format at a time.

It is primarily a paint software which you can use to create new drawings, edit existing drawings, enhance images, edit images, draw over images, and do many other operations. To perform different drawing operations, it provides a lot of drawing and painting tools like Brush, Line, Flood Fill, Color Palette, Dropper, Shapes, Effects, etc. By using various available paint tools, you can also make adjustments on input WebP image before converting it to SVG format. Another handy feature is its ability to support a lot of image file formats like JPG, PNG, GIF, TIFF, and more.

How to convert WebP to SVG using RealWorld Paint:

It is a feature-rich WebP to SVG converter software that lets you edit as well as change the format of an input image. 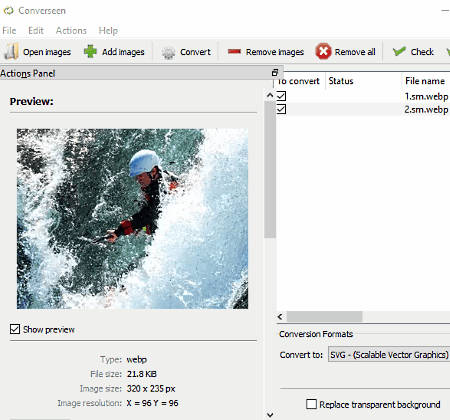 Converseen is a free open source batch image conversion software that you can also use as WebP to SVG converter software. It is also a cross-platform software that works on Windows, Linux, and FreeBSD. In this software, you can quickly add one or more WebP images and convert them to SVG as well as AI, SGI, SVGZ, TIFF, XPM, and more formats.

How to convert WebP to SVG using Converseen:

It is a simple and beautifully designed software that simplifies the entire conversion process. You can perform conversion between multiple graphics formats in it. 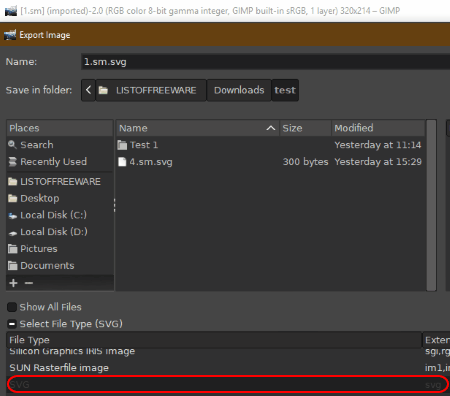 GIMP is a free open source WebP to SVG converter software for Windows, Linux, and MacOS. It is primarily an image editing and manipulation software. Through this software, you can make various changes on input WebP images before converting it to SVG, like adding filters, enhancing colors, resizing images, changing exposure, changing image orientation, and more.

However, this software cannot convert or export any image into SVG image format natively. To do that, you need to add an additional plugin named file-svg-export.py to this software. To install the plugin, first, download the plugin file from the aforementioned link and then extract the plugin. After that, paste the extracted plugin file to GIMP\lib\gimp\2.0\plugins folder and restart the GIMP.

How to convert WebP to SVG using GIMP:

It is a free popular and feature-rich image editor which is also capable of converting WebP to SVG and many other image formats. 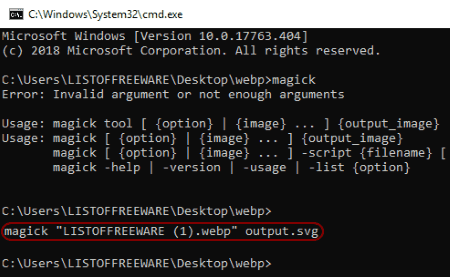 How to convert WebP to SVG using command:

With the use of the right command, you can create animation, decorate borders, draw shapes, create a gradual blend of colors, and perform many other tasks through this software.

Lack of GUI is its main limitation for a general user.

It is another good software through which you can convert WebP images to SVG using a simple command and perform many other image enhancement and editing tasks. 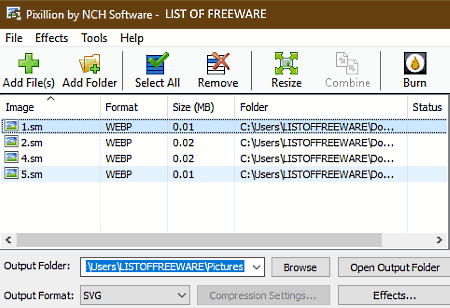 Pixillion is yet another WebP to SVG converter software for Windows and MacOS. Using this software, you can easily convert one or more WebP images to SVG at a time. Apart from WebP and SVG, this software supports a lot of image formats like JPEG, PNG, GIF, TIFF, ICO, RAW, and more. It also supports Adobe Photoshop (PSD) and Adobe Illustrator (AI) files which you can also convert to SVG and to other standard image formats. It contains a preview section on the right side which you can use to preview images before starting the conversion.

How to convert WebP to SVG using Pixillion:

This software is only free for non-commercial use.

It is simple yet very capable WebP to SVG converter software through which you can easily convert multiple WebP images to SVG format.