All of these portable screen recorders let you capture video of a full desktop screen, a selected window, or a specific region. Some of these software also let you record audio along with screen video by using your microphone. A few of these also come with a feature of recording a video through webcam. You can setup various recording configurations including video compression, video format, frame rate, encoding quality, etc. Other than that, some capture options like show/hide cursor, enable autopan, etc., can also be set up in a few of these. Most of these provide hotkeys to start and stop screen recording.

Most of these software support multiple output video formats such as MP4, AVI, MOV, WMV, etc. Plus, some of these also let you save recorded screen video as an animated GIF.

CamStudio is one of my favorites as it provides some unique features to record desktop screen which include screen and video annotations. ScreenToGif is another great portable screen recorder as it provides some additional features like Board Recorder, Editor, etc. Checkout the article to explore these and more features of all software. 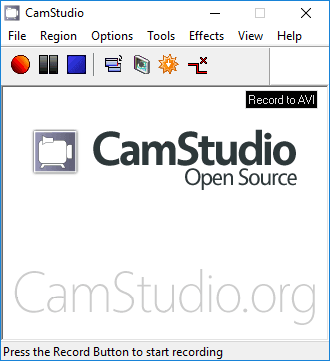 CamStudio is a popular free screen recorder software for Windows. It comes in a portable package too which you can download from the download page given below. You just have to run its executable file in order to record full desktop screen, a window, or a region. It also lets you record sound from microphone or speakers. It provides Screen Annotation and Video Annotation tools to add various annotations to make a tutorial video. Some generic annotations like system time stamp, caption, watermark, etc., can also be added to the screen recording. The final recorded video is saved in AVI format. It also provides a tool to convert AVI to Flash. After recording screen, you can play the video in its own video player.

Before you start recording your desktop with this portable screen recorder, you can setup various video options. These video options include compressor, quality, framerate, etc. You can also enable autopan and adjust autopan speed. Some cursor options like hide or show cursor, highlight cursor, etc. are also available in it.

All in all, it is one of the best portable screen recorder software. 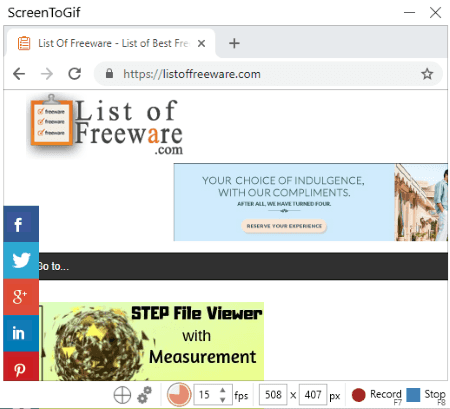 ScreenToGif is another free portable screen recorder for Windows. You can record desktop screen as an animated GIF, APNG, or as a video. To record screen as a video, it supports MP4, AVI, WebM, and WMV formats. Apart from that, you can save recorded video as individual image frames.

Not just desktop screen, you can also record video through webcam. It also provides a Board Recorder which lets you record your drawings on a whiteboard. Additionally, it comes with an Editor application which opens the recorded video to edit it.

To record screen using ScreenToGif, you can manually set width and height of the region to be captured. Also, you can set maximum frame rate for output recording. After doing so, click on Record button and capture your screen video. When recording finishes, press Stop button. As soon as you do that, it opens recording with individual frames in its Editor application. This application provides a good number of editing and other features which are as follow:

Note: Download its ZIP folder to use it without installation.

Screencast Capture Lite is another portable screen recorder for Windows. You can record a fixed region, window, or whole desktop screen. It also lets you record video using your webcam and also, you can add voiceover to recorded video through microphone.

How to record screen using this portable screen recorder:

Before you start recording, you can setup output configurations using Settings option. These configurations include video frame rate and container (AVI, MP4, MKV, M4V, MOV), audio frame rate, capture mouse clicks, mouse cursor, and/or keyboard keys, and storage folder. After that, you can start recording using the dedicated button and stop it when done. You can access the recorded video from the prespecified output folder. The recorded video can be converted from one supported format to another.

Note: Download its ZIP folder from its download page to get its portable version. From the ZIP folder, go to its Binaries subfolder and run its application file to use it without installation. 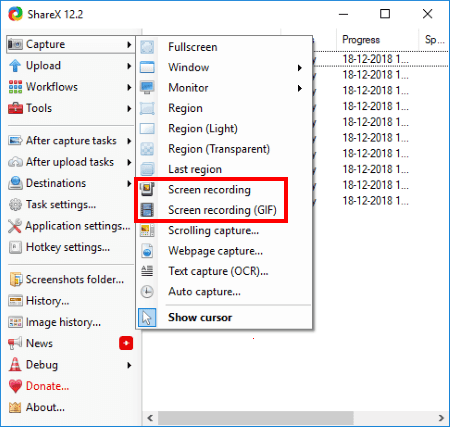 ShareX is a free open source screen capture and recorder software for Windows. It also comes in a portable package which can be downloaded from the link given below.

It can record screen in a video format (MP4, AVI, WebM) or GIF format. For video, it requires FFMPEG which can be installed on demand. By going to Task Settings, you can configure some recording options like video codec, frame per second, show cursor in recording, screen recording duration, etc. You can also set hotkeys for starting and stopping screen recording.

To record screen video, launch this software and go to its Capture > Screen Recording option. Or, you can use the predefined hotkey. It will then let you select a region to capture video. After selecting region, record screen video and stop when you are done. The recording will be saved in prespecified output folder. 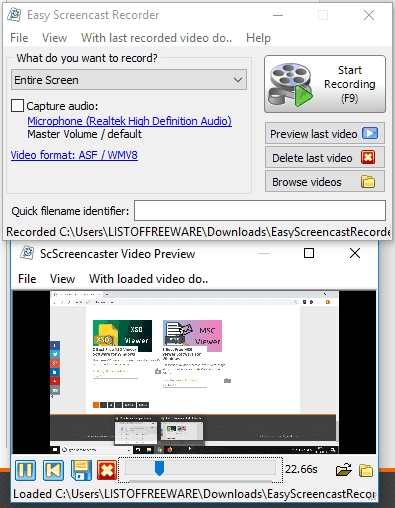 When you stop screen recording, it previews the recorded video in its inbuilt player. 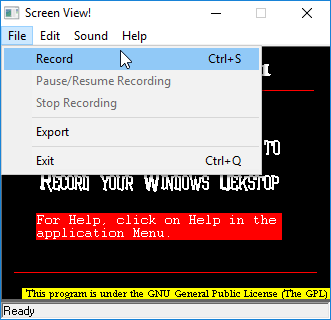 Screen View! is another one of portable screen recorder for Windows on this list. Along with desktop screen, you can also record audio using your microphone. It saves the output screen video as AVI and SWF files. It also saves individual frames of recorded video as BMP images.

Here are the steps to record desktop video using this portable screen recorder: 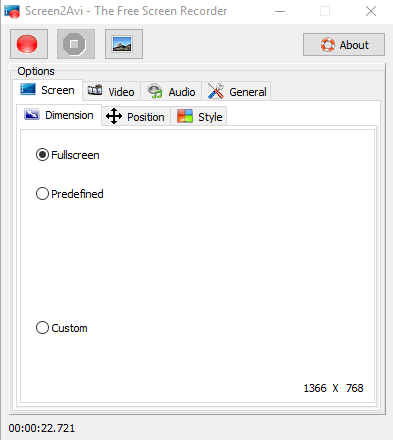 Screen2Avi is one more portable screen recorder on this list. Using it, you can capture screen video of full screen, predefined size (360p YouTube 16:9, YouTube 4:3, 720p YouTube 16:9, etc.), or a custom area. While taking screen video, you can enable audio and select input audio device like microphone. The output recorded video is saved in AVI format. Before recording, you can configure compression settings and setup frame rate. It lets you enable/disable cursor, transparency, etc. Also, you can take snapshots of your screen. This portable desktop recorder lets you setup hotkeys for different tasks. 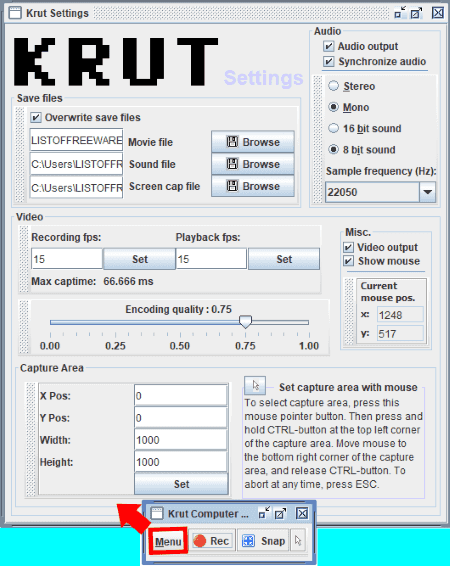 Krut Computer Recorder is another one of portable screen recorders on this list. You can simply record your desktop screen video in MOV format. You can also take screenshots with it. 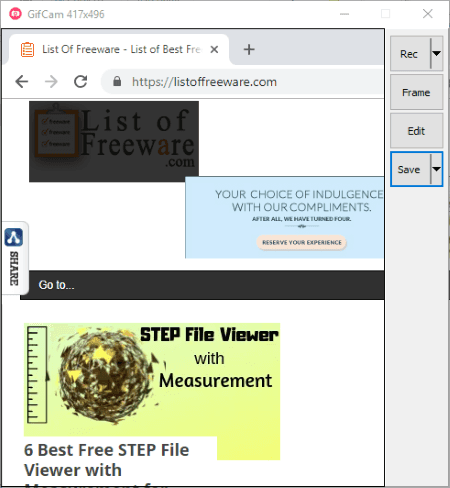 GifCam is yet another free portable screen recorder software for Windows. As the name suggests, it basically records screen video as an animated GIF. From Rec option, you can start recording screen video by selecting a frame rate (33 FPS, 16 FPS, 10 FPS). You can also enable full screen and capture cursor options. To record a particular region, simply adjust the size of its application window. When you are done recording screen, stop the process and save the recording as a GIF. You can select a color profile for the output GIF such as 256 colors, 20 colors, monochrome, grayscale, etc. 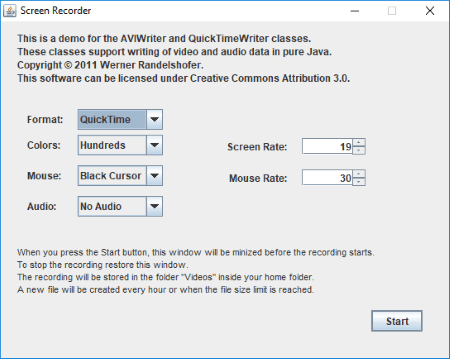 Screen Recorder is the next portable desktop recorder which works without installation. This software requires Java to work.

Before you start recording your screen, you need to setup a few configurations which are:

After setting up these configurations, hit the Start button to begin screen recording. When you are done, close its window and the recording will be saved in the Videos folder on your PC.

Note: During my testing, it was not able to record screen video in QuickTime format. 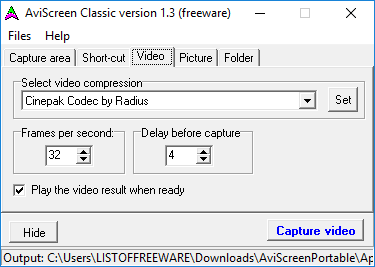 AviScreen is the next portable screen recorder for Windows. Using it, you can capture full screen or a region with specific dimensions. It creates a recording movie as well as saves individual image frames (GIF, JPG, BMP). The video is saved in AVI format.

To customize output recording video, you can select a video compression and setup options like frame rate, delay before capture, show cursor, etc. It also provides flexibility to set hotkey for different tasks.

Note: For some video compressor, the output is not as desirable as you might want.

xvideocapture chung is a simple portable desktop recorder for Windows. It lets you capture video of full desktop screen, a window, or a selected zone. The recorded video is saved in AVI format in Video subfolder of its download folder.