Here is a list of the best free Golang IDE for Windows. Go language, often called Golang is a programming language developed by Google. It is initially released in 2012. Go is used for programming servers and software systems on a large scale. It is forward compatible and doesn’t cause issues with updates.

This post covers 5 free Golang IDEs. It is a mix of popular and lesser-known programming IDEs with Golang support. These IDEs have similar as well as different sets of features and functionalities. Auto-completion, syntax highlighting, find and replace, etc. are the common features you get with all these IDEs. Some of these IDEs come with integration with GitHub, Git, Docker, Gulp, Grunt, NPM, etc. You can go through the list to check these out in detail.

My Favorite Golang IDE for Windows

I prefer Atom for Golang programming and development. Atom has a multi-language editor that comes in handy features such as smart autocompletion, pan view, project management, etc. The built-in package manager and GitHub integration make it easy to add functionality and fetch code quickly. On top of that, the collaboration feature makes it a good option for teams working remotely. 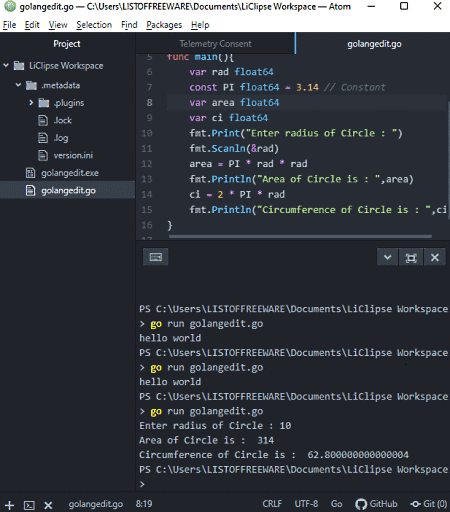 Atom is a free programming IDE that supports various programming and scripting languages including Go. It is an open-source cross-platform text editor available for Windows, macOS, and Linux. This editor is a good fit for Go language programming. Atom has a built-in package manager that allows users to install suitable packages for their needs. Users don’t have to switch editors for different file types. They can just install a package manager and continue their workflow within the Atom editor. Another programming-orientated feature of Atom is that it has integration with Git and GitHub means users can directly fort projects and codes from GitHub without leaving the editor.

Atom is a really nice IDE for the Go language. With a built-in package manager, themes, and GitHub integration, it is good for programming as well as structured note-taking. 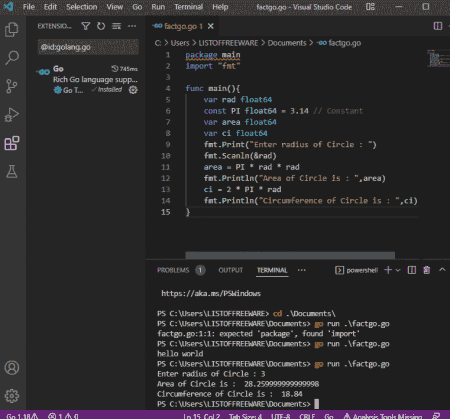 Visual Studio Code is a free open-source code editor by Microsoft. It is basically an IDE that supports various programming and markup languages including Go language. Visual Studio Code is for programming purposes and it comes with many useful features in that area. It has IntelliSense that offers smart autocompletion of the code for hundreds of programming languages. It has built-in Git commands and can debug the code within the editor. On top of that, it features an Integrated Command Line Interface with multiple terminals.

Visual Studio Code is one of the best IDE for the Go language. It has lots of features built-in right into the editor with extensions to add more on top. 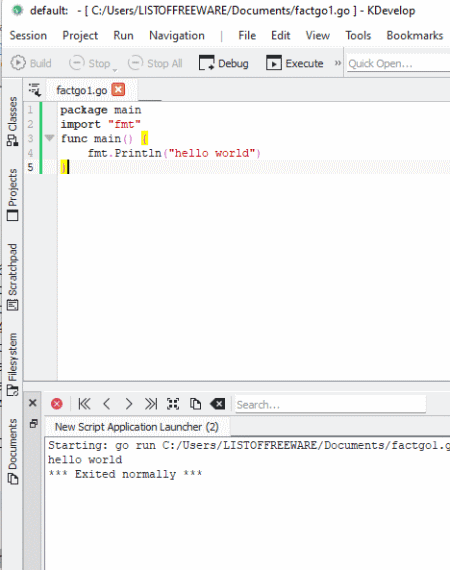 KDevelop is another open-source programming IDE that has Go language support. This is a cross-platform IDE that is fully compatible with various Linux distros and currently offering experimental builds for Windows and macOS. The IDE supports many popular languages and comes with extension support that allows you to add more languages as well as other features to the IDE. It packs useful features like Sessions, Projects, File Explorer, etc. This IDE has very useful Navigation features. It lets easily navigate within and across the projects, files, codes, and more.

KDevelop is a good programming IDE for Go and other programming languages. With its project management and navigation features, it is a decent choice for long programming projects. 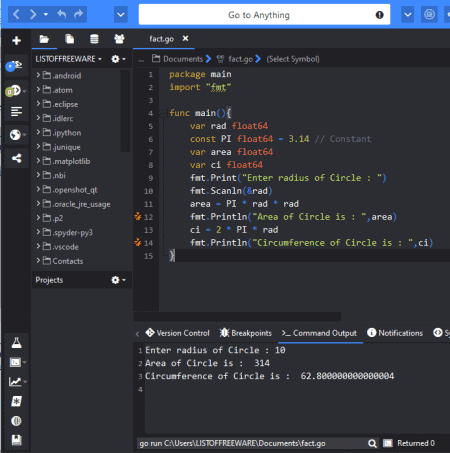 Komodo is another free programming IDE that you can use for Go language programming. This is a cross-platform tool that comes with a multi-language editor. The editor has a clean interface with a sidebar. The sidebar shows the opened files and projects. The editor comes with many useful features. It shows a code map that helps you navigate the file. It can track changes and suggest autocompletion for various programming languages. Apart from that, this IDE  has Docker, Gulp, Grunt, NPM, and Yarn Integration. It is also capable of real-time collaboration where you can work on a project with others.

Komodo is a nice IDE for Go laguage. The real-time collaboration, integration, and other debugging tools make it good for collaborative development. 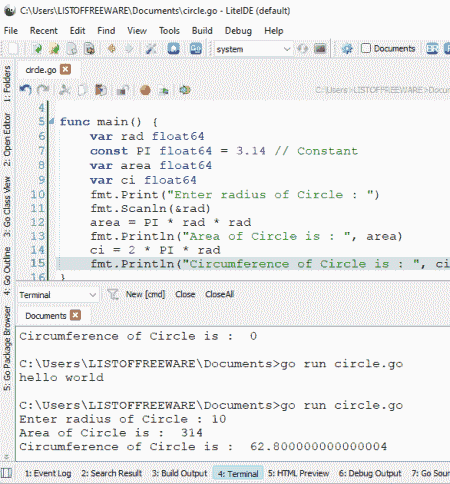 LiteIDE is yet another open-source programming editor. This editor supports Golang, Markdown, and Golang Present. It is a plug-in system where you can configure multiple environment variables. It has a dropdown where you can quickly switch between multiple system environments based on the build. Apart from that, the editor comes with handy features including auto-complete, file revision, syntax highlighting, color scheme, etc.

LiteIDE is a perfect tool for Golang programming. The ability to quickly switch environment variables is nice for multi-language builds.