Here is the list of Best Free Green Screen Software for Windows using which you can easily remove green screen from a video. These software have Chroma key effect, which lets you easily remove green background from a video footage. Also, you can apply various effects other than Chroma Key, such as effects related to Motion and Transform, Blending and Color correction, Filters, and many different Artistic effects. Most of these software are advanced video editing and graphic software, which not only do chroma keying, but can be used to carry out various video edits.

Chroma Key is a popular post-production technique, also know as color keying. Using this technique, background of the subject of an image or a video is removed and replaced by another background. It is used heavily in many industries specifically in newscasting, motion picture, and video game industry.

My pick is Lightworks. It has a simplistic interface and allows you to apply not only chroma key but numerous other effects. Also, it gives you a professional-like experience while editing videos. Even if you are new to video editing, you will find this editing software easy to use.

You can also check out the list of best free Video Broadcasting Software, Video Streaming Software, and Video Editors. 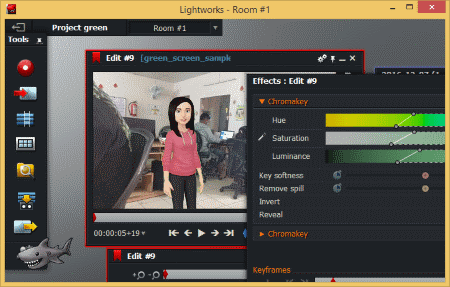 Best thing about this green screen software is its awesome interface, though it takes a while to get along with.

There are plenty of other effects that you can apply to your combined video or each media file individually. These effects include Color correction/temperature/tint, Fusion, Mattes, Masks, DVE, etc.

All in all, it’s a nice green screen software for compositing and for best video quality. 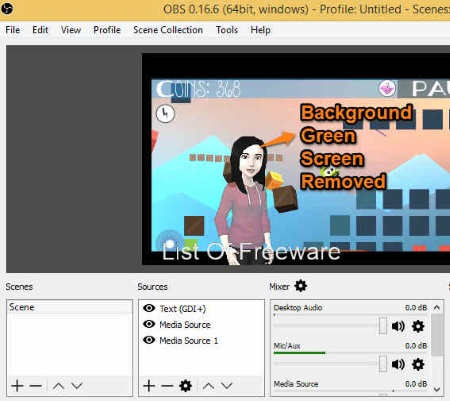 Open Brodcaster Software is one of the most popular open source green screen software among live streamers. It’s primary focus is to broadcast your content to online streaming services; however, you can use it to apply chroma key to green screen videos along with various other video effects.

Best thing about this software is that you can chroma key recorded video, as well as live feed from webcam. All you need to do is setup a green background while recording yourself, and when you broadcast yourself, OBS can replace Green screen with some other background in real-time.

How To Chroma Key Using OBS

OBS lets you manage the size and position of the contents in a scene. You can easily resize a video, move a media content to foreground or background, and carry out various other transformations.

There is no trick involved while saving a video. It’s absolutely simple. You have to click on Start Recording and whatsoever you’ve set up on screen will be recorded. In Settings option, you can change the recording output extension from flv to mp4, mkv, ts, m3u8, and mov. Plus, you can broadcast the content to different streaming services online such as YouTube Live, Twitch, HitBox, and many others. 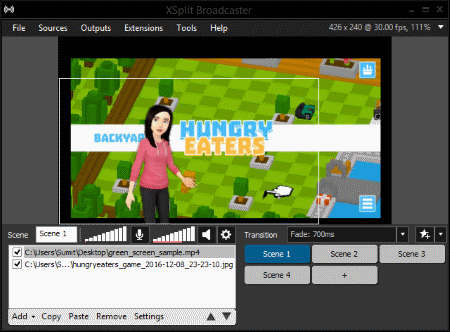 Just like OBS, it allows you to apply chroma key to live feed from a webcam, by removing the green background from it.

You have to sign up with XSplit before you can use this software. You can directly sign up from the software’s interface.

You can record and save the file locally in MP4 and FLV file formats.

Working with XSplit Broadcaster for producing chroma key applied videos is as simple and easy as removing green screen in OBS. 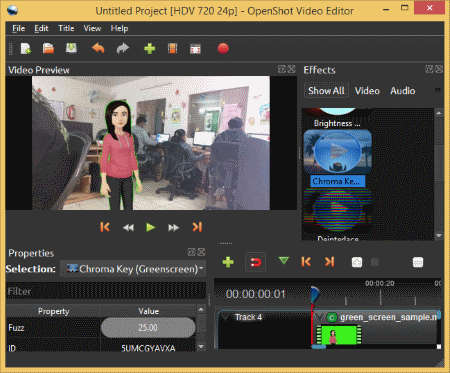 Openshot is one of the most popular video editor and open source project, which can easily be used to chroma key green screen videos. It has a nice user interface and different effects to add while editing. It is available for Windows, Linux, and OS X. Removing green background from a video in Openshot is easy and doesn’t involve many steps.

Apart from removing green screen, it also gives you a nice video editing experience. You can choose from many effects to add to your video such as Color correction, Saturation, Masks, Blur, Negative, etc. Also, its exporting option is awesome, where you can choose from multiple profiles and formats.

How To Remove Green Background From A Video In Openshot

It works fine while removing green screen from a video and combining videos to make a nice quality video. 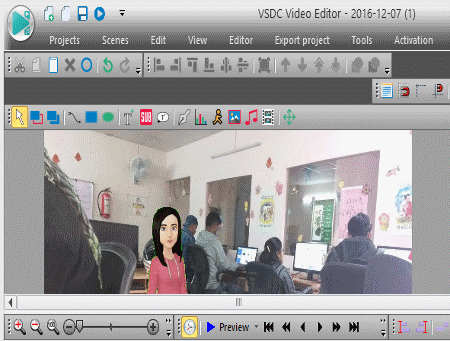 VSDC Free Video Editor is an easy to use video editor for chroma keying. The interface is very easy and inclusive of all the essential tools for basic as well as advanced video editing. With this software, you will be able to produce awesome movies with fancy backgrounds, like professionals do in movies, with least effort.

Working with VSDC is really simple because it allows you to have multiple media files on a scene and each file can easily be dragged freely across the screen. It comes with a variety of features to add many effects to your video content.

How To Chroma Key In VSDC Free Video Editor

Most of the features while chroma keying are not available for free and reserved for Pro version of VSDC, like Min brightness threshold, Min chromaticityU(V) threshold, Brightness, and Blend value. 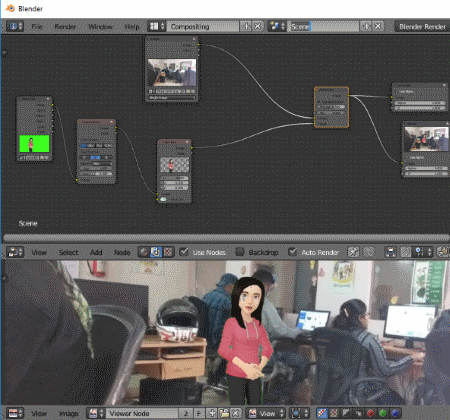 Blender is another very popular open source computer graphic software which you can use for green screen video editing. Blender is a huge application, plus it’s bit complex for chroma keying. Blender uses node-based modelling technique to create animation and is really popular among animators. We are going to use node-based modelling to remove green background from videos as well.

Blender is no doubt an awesome graphic software to work with. But, if your only aim is to add chroma key to a green screen videos and not complex video editing, then you may opt for some other video editing software. 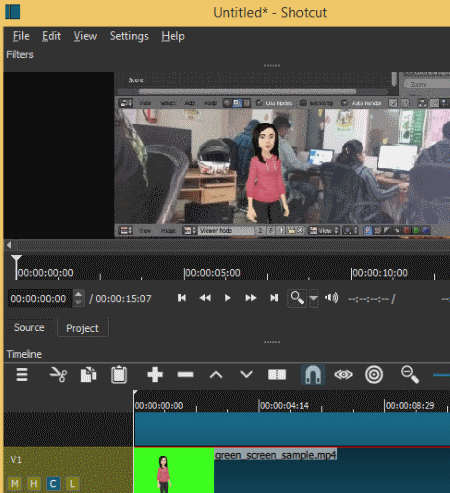 Shotcut is another popular free and open source video editing software to be used as a green screen software. Using chroma key in Shotcut is really easy, because of its feature rich and easy to use work environment. It is cross-platform and available for Windows, Mac, and Linux.

Applying chroma key with Shotcut is easy. It has numerous effects to choose from other than Chroma key, such as Color correction, Contrast, Grading, Brightness, Blur, etc. This software frequently crashed while testing; however, the video editing options and overall experience was good. 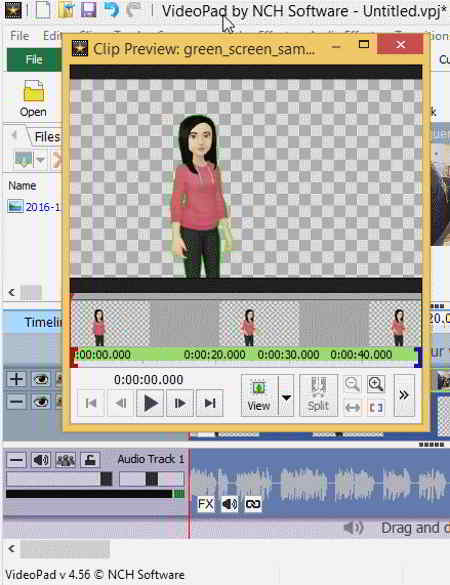 Videopad Video Editor is a general video editor that can also be used for chroma keying. It is absolutely free as long as you are not using it for any commercial purposes. It has a great interface and an easy to use work environment. While starting with it, you have to go though different steps in order to remove green background from a video and compositing with other media files.

How To Chroma Key With Videopad Video Editor

Lastly, you can export the film to your local system or online portals such as YouTube, Facebook, Dropbox, and Google Drive. It allows you to change Resolution, FPS, Codec, and File Format of video. You can export your media content in flv, mp4, mov, avi, asf, swf, ogv, gif, etc. Working with this software to remove green screen is as easy as working with any other software in this list.