It is preferred to emulate iOS on PC rather than website as it consumes system memory to run, and is way faster than websites.
Apple provides an iOS emulator, which is also an app development tool for iOS. It is the best tool to run iOS on PC, but it is only supported by MAC OS, and comes for a price.

My Favourite iOS Emulator for Windows is:

I like iPadian the most as an iOS emulator. The GUI is same as an iPad, and when you run it you will feel like you are using an actual iPad on your PC. Get access to App Store to download new apps. Enjoy the already installed apps which work fine on this free iOS emulator for Windows.

You can also checkout the list of best free Android Emulators, Websites To Download Free Stock Photos, and Virtual Machine Software For Windows. 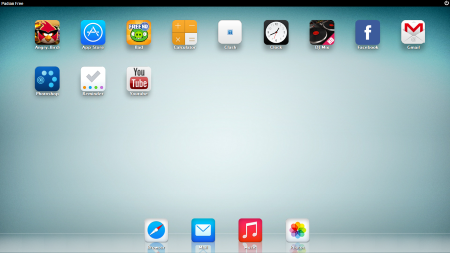 iPadian is a free, and one of the best iOS emulators for Windows. What keeps this iOS emulator on top of the list of best iOS emulator for Windows? Its graphical interface, app compatibility, and option to download Apps from App Store. Download, and install this software to run it on your computer. A full screen iPad interface appears as you open this iOS emulator. The icon tiles appear as you’d find in an iPad. There are a bunch of Apps pre installed along with the native apps. You will find the following apps, which are ready to be run: Angry Birds, DJ Mix, Facebook, Photoshop, Clash of Clans, etc. The native Apps included are: App Store, Calculator, Clock, Gmail, Youtube, Gallery, Safari Browser, Mail, and Music.

When you open any app on this free iOS emulator, it runs like it would on an iPad. Use the app, and then to close it, click on the cross button on the top right corner of the emulator. If you want to access Windows, click on the windows button on the bottom right corner. The music player and gallery can access media file available on your computer. The browser, and Youtube can easily access your computer’s internet to surf via this free iOS emulator for Windows. Whenever you open an App, two navigation buttons appear to help you switch between apps easily.

Now install iOS apps on your computer with this software. Your favorite app is just a click away; click on App Store to find and install it on iPadian.

Be careful while installing this iOS emulator, as it asks for permission to download and install additional software. 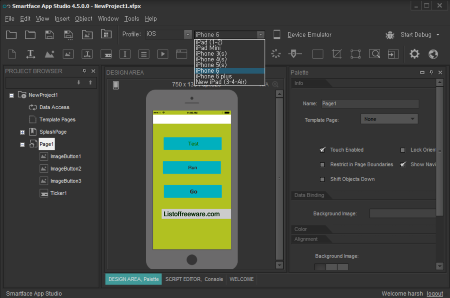 SmartFace is primarily an app development software, where you can emulate iOS for free. This iOS emulator for Windows is free to use with basic functions, and unlimited App development.

How to run iOS on Windows using SmartFace:

This software basically runs iOS apps to test it in various iOS environments. You can emulate different iPhone, and iPad versions to test your app, like: iPhone 6, iPhone 5, iPhone 4, iPad mini, etc. Simply go to the File tab, and open an App project to emulate it for iOS. This freeware also helps you to develop iOS  apps on Windows. Start from scratch to develop any kind of app you want to develop. While developing, you can also emulate iOS to test your app. This iOS emulator for Windows lets you add almost anything to your app while doing development. Insert Images, Label, Buttons, Text, Ticker, Video, Scroll View, Map View, Slider, and many more objects which are highly configurable. Once you are done developing your app, debug it, or emulate it directly to a device connected to your PC. Debugging and device emulator options are not available on the free version. The UI of this iOS emulator is neat, and easy to work with.

Apart from iOS, you can also emulate Android apps on this software. This is a very vast software, and serves multiple purposes from app development to app testing. 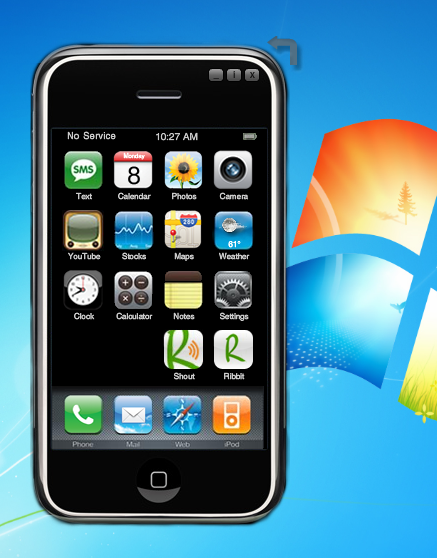 AIR iPhone is a free iOS emulator for Windows, which works with the help of Adobe AIR framework. As you run this software, an iPhone GUI appears, which looks exactly like an iPhone. You can access the installed apps on this emulated iOS, however all apps do not run because of the hardware requirement. Access Web, Weather, Settings, Music, Mail etc. Click on the orientation arrow on the top right corner of the UI to view the iOS emulator is horizontal mode. Click on it again to toggle back to vertical orientation. The home button works the same way it works on an iPhone. Click on the i button to view the version of iOS. This software can not be used to test, or run any new app, however gives you a realistic feeling of using iOS on Windows desktop.

You will need to download and install Adobe AIR to successfully run this free iOS emulator for Windows.