Here is a list of best free Mars simulator software for Windows. These free software are used to visualize and analyze Mars planet for research purpose or for general interest to explore life on Mars. You can view and explore Mars and its moons called Phobos and Deimos in real time using these software. Also, some simulation parameters can be customized to carry on Mars simulation, such as speed, date, time, etc. You can easily go to a particular location on Mars using respective GPS coordinates in many of these software.

Most of these are solar system explorer software, so you easily visualize more planets and other objects of a solar system. These software provide various features to navigate through Mars or other planets of the solar system, such as Zoom in/out, Ride-along view, Free Fly, Move in/out, Fullscreen, etc. In one of these software, you can even create an AVI movie of Mars simulation. And, you can also save Mars view as an image. All in all, these are really good software for all those who want to visualize Mars and study its behavior.

Mars Simulation Project is one of my favorite Mars simulation software on this list. It is specially designed for the purpose of analyzing and visualizing Mars in different conditions. You can find a feature rich set of tools to explore Mars through it. Check out its full description to know more.

NASA’s Eyes is another good one as it provides a great experience of exploring Mars in 3D view. 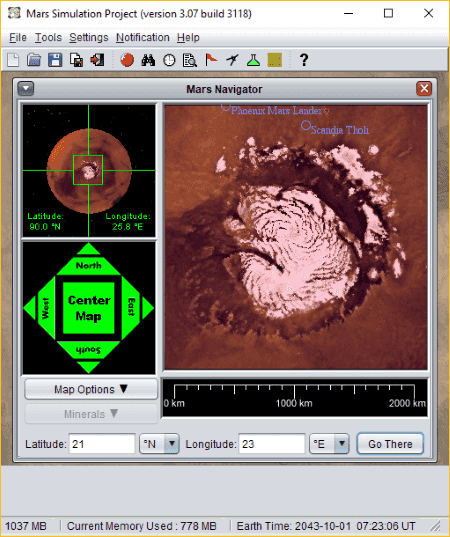 Mars Simulation Project is a free portable Mars simulator for Windows. It is a Java-based software, so you need to have Java installed on your system for it to work.

How to simulate Mars planet using this free portable software:

This software provides a few sample simulations with predefined configurations to use. Or, you can also create and start a new simulation with customized values of population, longitude, latitude, etc. After starting a simulation, click on its Tools > Mars Navigator to visualize Mars on the screen. You can now navigate through Mars using given control options.

It is one of the most featured software for the Mars simulation. It contains all essential and even advanced tools to visualize and analyze Mars planet in real time. Additionally, as it is portable, you don’t have to install it on your system and you can just use it when required. 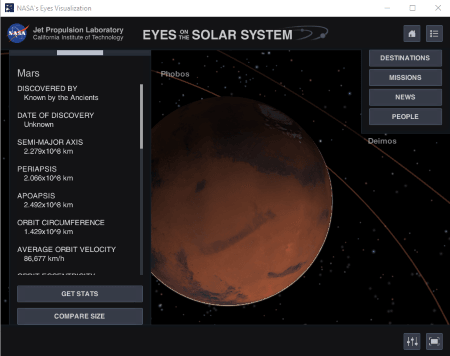 NASA’s Eyes is a featured Earth and solar system visualization software for Windows. As it lets you perform solar system simulation, you can also use it as a Mars simulator. Let’s see how.

It will now start real time Mars simulation with larger and smaller moons i.e., Phobos and Deimos. You can use your mouse to view Mars from different sides and angle. Besides that, it lets you view basic description, Mars statistics (orbit circumference, average orbit velocity, orbit eccentricity, mean radius, orbit inclination, etc.), and more. 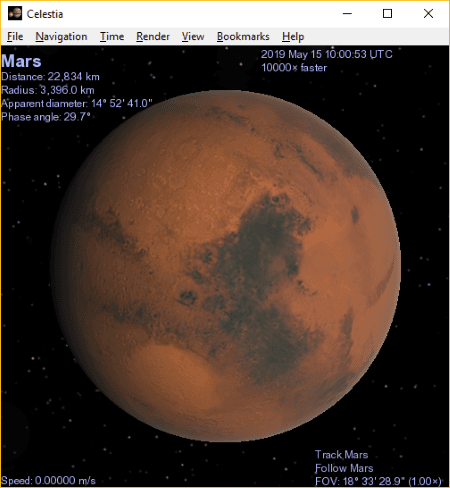 Celestia is a free space simulation software for Windows, Linux, and Mac OS X. It can also be used for solar system simulation including Mars simulation. It lets you simulate and visualize Mars planet individually. Let’s checkout how.

As you do that, it will show real time Mars simulation on its interface. You can view many stats about the simulation on the screen including distance, radius, apparent diameter, phase angle, date and time, etc.

It is one of the best Mars simulators which offers more handy features including solar system browser and solar and lunar eclipse finder. 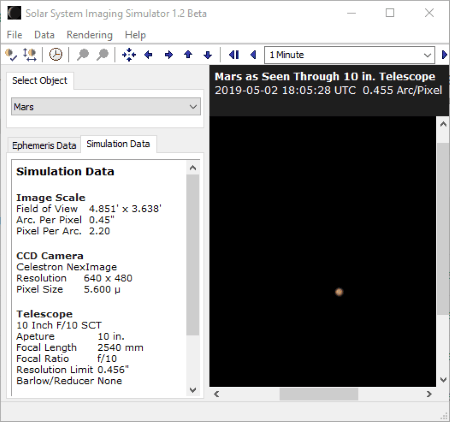 Solar System Imaging Simulator is the next free Mars simulator for Windows. As the name suggests, it is basically a software to visualize planets with astrophotography equipment. Using it, you can simulate solar system objects in 3D including Mars.

After launching this software, choose Mars from Select Object section. You will now be able to visualize Mars with Ephemeris Data and Simulation Data. These data basically include information like time, appearance data, position, field of view, etc.

Solar System Imaging Simulator is a nice and simple to use Mars simulator and an overall solar system simulator which you can use for free. 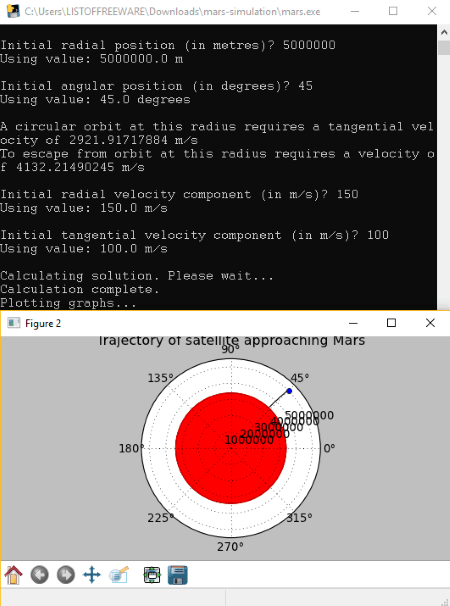 Mars Simulation is another portable Mars simulator software on this list. It is command based software which basically generates graphs showing the trajectory of satellite approaching Mars. You can enter the details of satellite and then it will create graphs.

How to use this mars simulation software:

You can save the graphs as images in various formats such as PNG, EPS, JPG, SVG, TIFF, etc.

Mars Simulation is a decent software to analyze the trajectory of a satellite under the Mars gravitational force influence.