Here is a list of Best Free BMP to DDS Converter Software for Windows. Using these freeware, you can convert a Bitmap (BMP) image file to Microsoft DirectDraw Surface (DDS) format. In these software, you can simply import source BMP images and then convert them to DDS format in a few click. Many of these support batch BMP to DDS conversion. Hence, you can convert a whole folder of BMP images to DDS at once. Isn’t that great? Besides that, multiple input and output formats are supported in these software which make them versatile. PNG, JPG, GIF, TIFF, TGA, ICO, CUR, EPS, and SVG are some of the supported image file formats in these software.

While many of these are dedicated bulk image converters, some are dedicated image editors. You can use image editors to create graphics or edit existing images in various formats. You can also edit source BMP files prior to conversion to DDS. For editing, you can use standard tools like resize, rotate, flip, crop, filters, color profile changers, etc. Plus, image annotation tools like pen, pencil, add text, add shapes, freehand drawing, and more are also provided in these converters. All in all, these are versatile software that can also be used for conversion of BMP to DDS format.

My Favorite BMP to DDS Converter Software for Windows:

XnConvert is one of my favorites as it can batch convert BMP to DDS. Also, it can batch edit source BMP images before converting them to DDS.

If you want a dedicated image editor with capability to convert BMP to DDS, try GIMP. 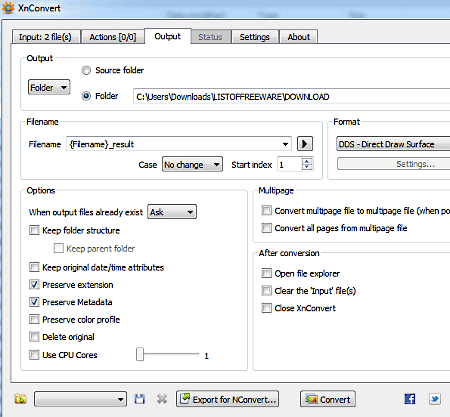 XnConvert is a feature rich image converter that lets you convert BMP to DDS. You can also convert various other images to DDS and other formats as it supports a lot of import and export formats. Some of its supported formats include PDF, PS, JPG, TGA, JXR, PSD, EMF, ICO, TIFF, and PNG.

The advantage of this software is that it supports batch image conversion. Hence, you can convert multiple BMP and other images to DDS format at once. Not just that, it also provides a lot of editing features that enable you to bulk edit BMP images before converting them to DDS. To edit BMP images, you get features including resize, crop, flip, rotate, add watermark, adjust color levels, add filters, and more.

How to batch convert BMP to DDS in XnConvert:

You can view the status of converted files in its Status tab.

A feature called Hot Folder is available in it. Using this feature, you can specify folders of source BMP images and it will automatically convert all newly added images to DDS or using previously used configurations.

It is free for private, non commercial use only.

It is one of the best BMP to DDS converters as it can batch convert images as well as lets you modify source BMP images before conversion. 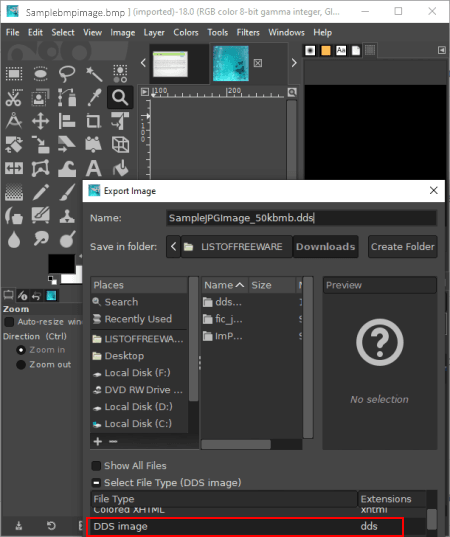 GIMP is a powerful image editor that also lets you convert BMP to DDS. You can simply import BMP image to this software and then export it to DDS using the dedicated feature. Apart from DDS, it supports a lot more other file formats to export an image or created graphic. Some of the formats that it supports as output include PDF, PNG, JPG, EPS, ICO, GIF, TGA, TIFF, etc. The main advantage of having this software is that you can edit BMP images as per your need. It provides a lot of drawing tools, filters, image transformation tools, effects, color profile adjustment features, and more which you can use to modify source BMP image the way you want.

Lets checkout a sorted procedure and steps using which you can quickly convert BMP to DDS.

How to convert BMP to DDS in GIMP:

It provides a lot of filters that can be used to generate image map, create animated GIF, and perform more graphics related tasks.

It is one of the best free open source image editors that can also be used to convert BMP to DDS and various other formats.

Converseen is a free batch BMP to DDS converter software for Windows. It lets you convert a set of multiple BMP images to DDS format at once. You can also use it to convert other images from one format to another. It supports many input and output formats that include EPS, SVG, PNG, TIFF, JPG, AI, PSD, PDF, GIF, ICO, and more. Apart from that, it also provides three editing features namely Resize, Change Resolution, and Rotate/Flip. You can use these editing options to edit source BMP images accordingly.

How to batch convert BMP to DDS in Converseen:

It is a great image converter which you can use to batch convert BMP to DDS and various other image formats.

ImBatch is a batch image processing software that also lets you convert BMP to DDS. It can batch edit and batch convert a folder of images in multiple formats including BMP, DDS, CR2, DNG, NEF, SR2, ARW, ORF, JPG, J2K, PNG, PNG, GIF, SVG, TGA, TIFF, etc. It provides a versatile set of image editing tools that you can use to manipulate source images. Some of these tools include image transformation, watermarking, annotation, color adjustment, filters, image metadata editing, etc.

How to convert BMP to DDS in ImBatch:

It can be used for free for non-commercial use only.

It is a nice bulk BMP to DDS converter that supports a lot of image formats including camera images and standard image formats. 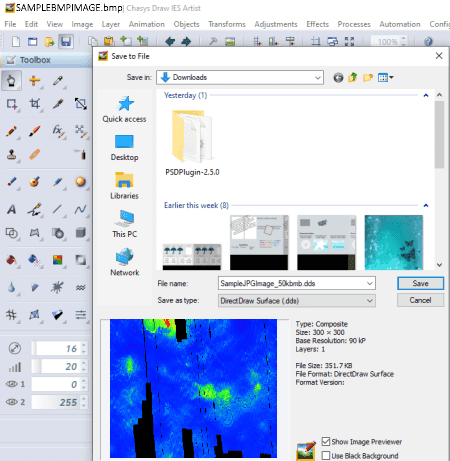 Chasys Draw IES Artist is a graphics editing software that allows you to convert BMP to DDS. It lets you open and view a BMP image and then convert it to DDS format using its save as feature. Prior to conversion, you can choose to edit and annotate input BMP image using various tools like painting tools, rotate, flip, crop, resize, effects, filters, add text, layers, etc. Besides BMP and DDS, it offers support to a lot more image formats including PNG, JPG, GIF, ICO, TGA, CUR, etc.

How to convert BMP to DDS in Chasys Draw IES Artist:

It is a powerful graphic designing software that also offers an added functionality that lets you convert BMP to DDS. 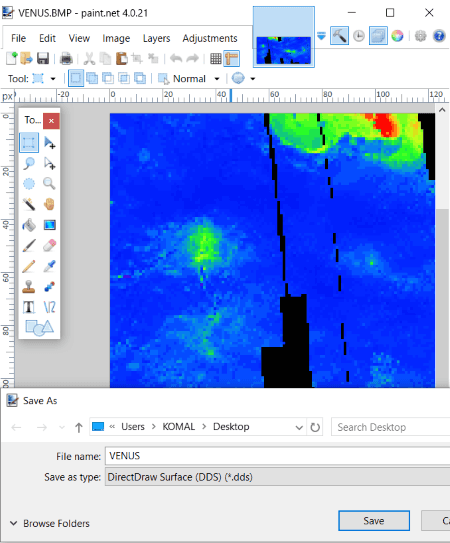 Paint.NET is quite a popular image editing software that you can use as a BMP to DDS converter. It lets you view and edit images in several common formats including BMP and later you can save them in another supported format like DDS. Besides DDS and BMP, JPG, PNG, GIF, and TGA are some of its supported input and output formats. To edit source images before conversion, you can make use of various drawing and annotation tools, layer management features, transformation options, color profile changers, and some other tools.

How to convert BMP to DDS in Paint.NET:

It is a nice image editor that may come handy in image conversion as well including PNG to DDS conversion.