Here is a list of best free 360 video viewer software for Windows. There are numerous of free video players, but a very few of them support playback of 360 degree videos. So, if you need to watch your 360 degree videos on PC, this list will be helpful for you.

While all of these 360 video player software provide basic playback features to watch 360 degree videos, some of them provide advance functionalities too. These features include video tuning and applying filters, changing playback speed, zooming videos, changing view mode, rotating or flipping videos, adding subtitles to videos, changing aspect ratio, and many more. One of these software also lets you convert 360 degree video to other video formats after modifying it. Most of these free 360 video player software support HD video quality. 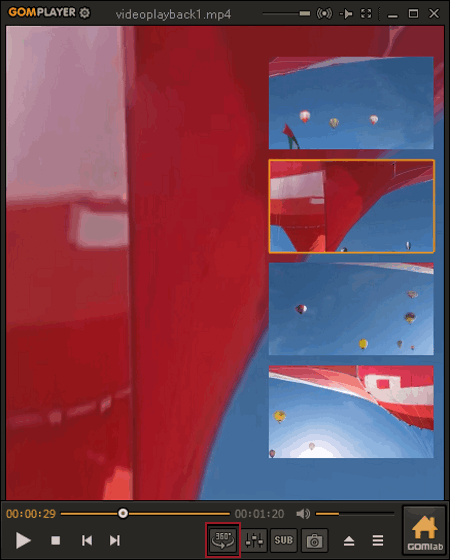 GOM Player is a popular video player which can be used to watch 360 degree videos.

To Watch 360 Videos in GOM Player:

GOM Player is a feature rich media player. Along with playing videos from PC, it also lets you play videos using their URLs. It provides basic as well as advance features in order to enjoy your 360 degree videos. It lets you capture screen, change interface skin, find missing codecs, and do more. 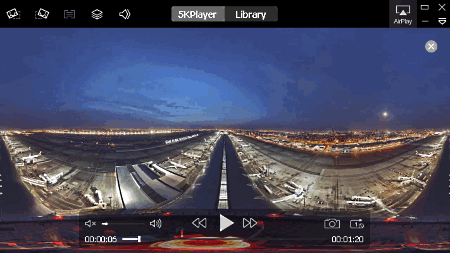 5K Player is a free 360 video viewer for Windows. Using this software, you can play 360 degree videos on your computer with standard playback features. You can also rotate or flip a 360 video while playing it. It lets you watch a 360 degree video by tuning its contrast, brightness, saturation, and gamma. It supports HD video quality of 4K, 5K, and 1080p resolutions.

It supports a wide range of video formats which include 3GP, ASF, AVI, MP4, MKV, MOV, MPEG, MTS, OGM, WEBM, and more. Along with playing videos, it lets you listen to music in formats of MP3, AC3, WAV, OGG, PCM, FLAC, etc.

5K player is one of the best 360 video player with HD quality support. It lets you browse videos, DVDs, and music to enjoy them on your desktop. It provides basic as well as some advance features to let you play media files, such as built-in AirPlay receiver/sender, subtitles support, live streaming, creating media playlists, etc. It has a very user-friendly interface. 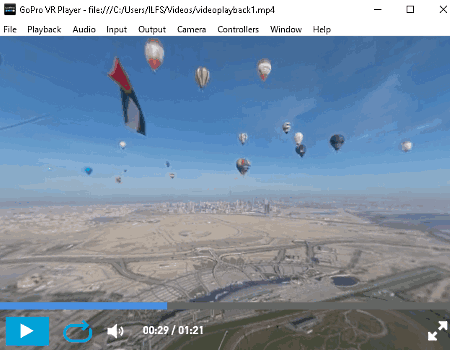 GoPro VR Player is another free 360 video viewer for Windows. It provides basic playback functionalities of a video player to watch a 360 degree video. It supports HD videos up to 8K resolution and 60 FPS. It also supports Oculus Rift VR and HTC Vive VR headset to let you watch virtual reality videos. Along with 360 degree videos, it lets you view panoramic images too.

GoPro VR Player is especially designed to play 360 degree and virtual reality videos. You can use it to view your normal videos as well. It supports 3D TV and HTTP live streaming (HLS). It provides hotkeys for all functions to quickly access them. 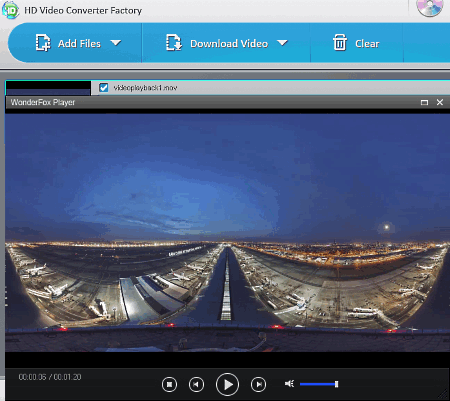 HD Video Converter Factory is basically a video converter, but you can use it to watch 360 degree videos as well.

To use it as a 360 video viewer, you can add a video, right click on it, and select Preview option. A ‘WonderFox Player‘ window will open up, where you can watch your 360° video. You can add one or more 360° videos at once and play them one by one in similar manner. It provides basic playback features to view videos: play, pause, stop, previous, next, and volume.

You can also apply effects to your 360° videos and rotate and flip, trim, and crop them. After modifying them, you can convert them to another format by customizing their quality, resolution, frame rate, aspect ratio, bit rate, etc. You can also apply audio filters. It supports a good range of output video formats like MOV, MP4, FLV, ASF, WMV, MKV, VOB, MPG, etc.

Along with converting videos and playing 360 degree videos, it can be used as a video resizer and video rotator too. 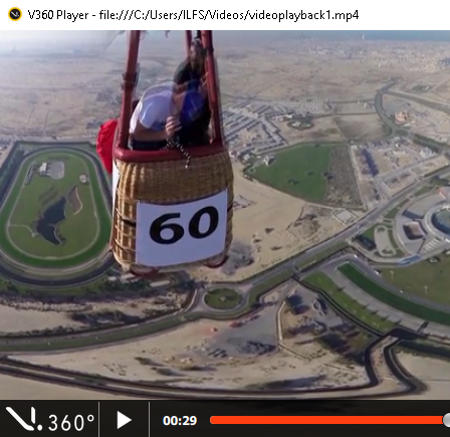 V360 Player is yet another free 360 video viewer. It lets you drop your 360 degree video to its interface or browse it to watch. You can pan left or right for a detailed view. It also provides few effects to add to your videos while playing them. You can choose view projection mode as source or rectilinear.

It basically supports standard video formats to import. You can also view normal or panoramic images using it.

V360 Player is a 360 video player with limited playback functionalities. It has a very simple user interface. 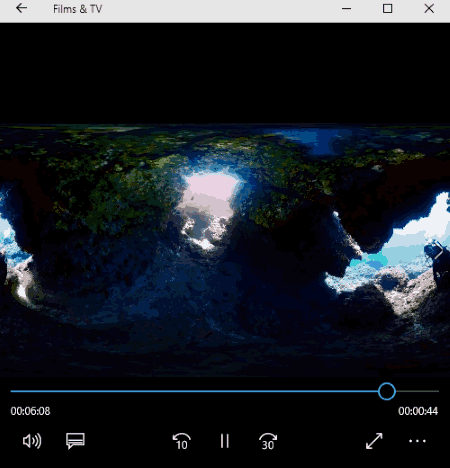 Films & TV (previously known as Movies & TV) is a popular desktop application for Windows to watch videos. Fortunately, it lets you watch 360 degree videos too. You can simply open a 360 degree video in the application and view it with basic playback functionalities. You can also add a subtitle file (.srt) to a video. It also provides ‘Cast to device’ feature to play videos on other devices as well.

This 360 video viewer supports all popular video formats to import to watch. You can also see the recently watched videos and quickly replay them.

Using this application, you can watch films and videos with limited features.