Here is a list of Best Free Aircraft Design Software For Windows. Using these software, you can easily design and analyze the airplane models. While designing an aircraft, you can choose a base model and then edit its components including fuselages, wing, stab, tail, etc. One of these aircraft designers also lets you set parameters like accommodations (airworthiness requirements, flight control, airframe), types (multipurpose, business, transport, high performance, towplane, agricultural, aerobatic, training, touring), etc. You can also analyze characteristics of engine and airfoil of an airplane in this software.

ADS is my favorite aircraft designer for Windows. It lets you analyze the performance of an aircraft model based on customized input parameters. It also displays caution message to let you know what needs to be corrected in your aircraft design.

You may also like some best free CAD Software, 3D Rendering Software, and Cabinet Design Software for Windows. 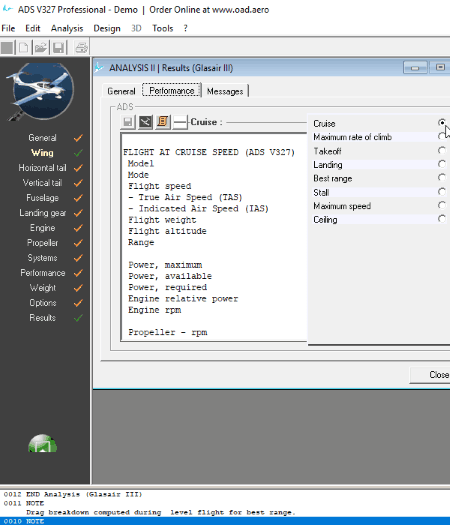 The main modules of ADS:

The performance results which are computed by this aircraft analysis software:

Based on parameters you have chosen in Analysis and Design modules, you get respective aircraft performance assessment results.

Some other useful tools provided by ADS:

Note: The free version of this aircraft designer comes with limitations like print and save options are disabled. 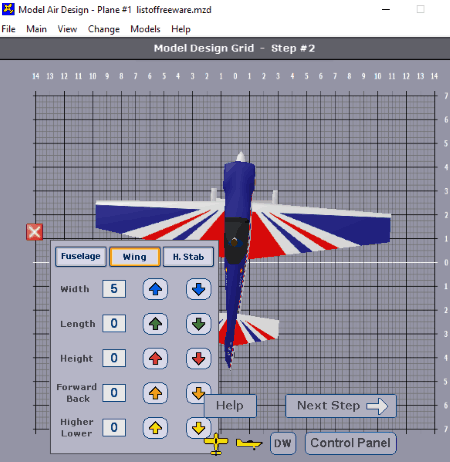 Model Air Design is a dedicated aircraft design software for Windows. You can either start from scratch or import an aircraft file (.mzd) and edit it to create an airplane model. For the latter option, it provides few sample files. It provides different sections to facilitates you with aircraft designer tools. Using Contol Panel button, you can access its different modules. It basically lets you design and analyze aircraft models in five steps. Let’s check them out. 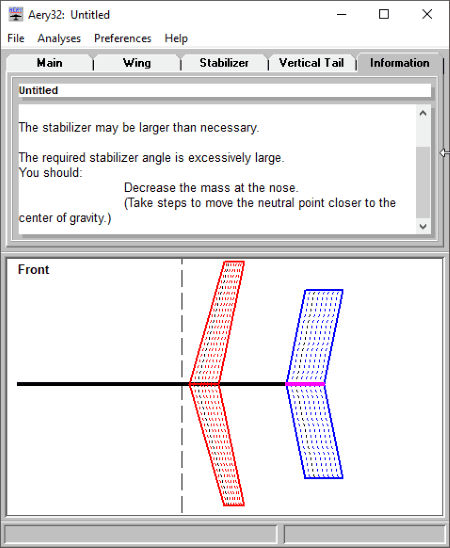 Aery32 is another good aircraft design software for Windows. It lets you design an airplane and based on that design, it displays information on “will it fly”.

For designing purpose, you can adjust fuselage length, wing location, stabilizer location, vertical tail location, and nose mass. You can change span, root chord, taper ratio, sweep angle, velocity, etc. for stabilizer, wing, and vertical tail. The aircraft design is displayed below its interface. Now, click on Analyses > Will it Fly option to get information on the same. Additional information on aircraft geometry with suggestions is also displayed, such as “stabilizer may be larger than necessary”, “center of gravity is behind the neutral point”, etc. 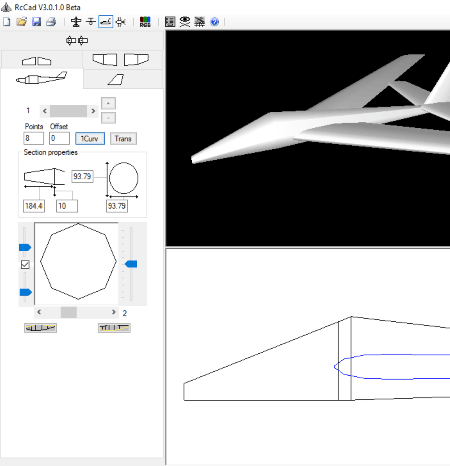 RcCad is another free aircraft designer for Windows. RC-CAD is basically an acronym for Radio Control – Computer Aided Design. It lets you create airplane models with particular specifications.

Coming to drawing tools, there are tabs including wing, fuselage, fin, stab, and equipment to create respective parts of an aircraft model. It provides different views to draw your model including front, top, side, and fuselage view. An RGB button is provided to color elements of your aircraft model. Also, you can use Fuselage Manager to show/hide fuselages used in your model.

After creating an aircraft, you can save the project in formats of .rcd, .wrl, and .dxf. You can even print side view/top view/each section of the fuselage or top view/front view of the whole plane.

RcCad is a basic 3d aircraft design software. It provides a 3D view for real-time preview of created aircraft design. You can check its help manual to figure out its features elaborately.

Although it provides a flying preview option, it is disabled in this demo/free version of this software. Hence, you can only design an aircraft model but not analyze it in this free aircraft designer software.