Here is a list of best free APE to MP3 converter software for Windows. These converters help you convert an APE audio to an MP3 audio file which is a more widely used audio format. Almost all these converters also let you perform batch APE to MP3 conversion. Apart from batch conversion, these software also ensures that conversion process takes as minimum time as possible. Features which are responsible for reducing the conversion time are Parallel conversion and feature to increase the number of core used.

Most of these converters are dedicated audio converters due to which these converters easily support multiple audio formats, both as input and output. Some of the most commonly supported audio formats are MP3, APE, MP2, WMA, and M4A. In most cases, you can perform the conversion in just two or three simple steps, which include adding APE files, customizing output parameters, and selecting MP3 as output. In general, all software are easy to use and are perfectly capable of converting APE to MP3.

My Favorite APE To MP3 Converter Software For Windows:

Media Coder is my favorite software because it can convert multiple APE files to MP3 in a parallel fashion. It also gives options to vary various important audio parameters that directly affect the audio quality. Plus, you can also use it as a standard audio converter to convert one audio format into another.

You can also check out lists of best free 3GP to MP4 Converter, Batch Audio Converter, and FLAC to MP3 Converter software for Windows. 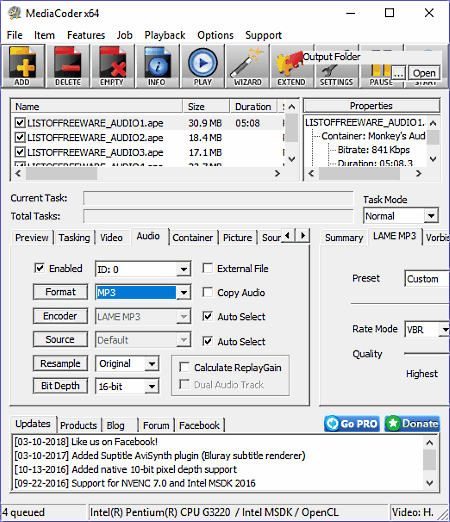 Media Coder is a free APE to MP3 converter software for Windows. Through this software, you can convert multiple APE audio files to MP3 format. This encoder is also capable of performing format conversion of up to 8 files simultaneously which significantly reduces the conversion time. Plus, it can encode audio files of both lossless (FLAC, ALAC, TTA, PCM, etc.) and lossy (MP3, MPEG audio, WMA, AMR, etc.) formats.

To convert APE to MP3, first, add all the APE audio files by pressing the Add button and then go to Audio section and select MP3 from Format menu. If you don’t want to make modifications before conversion, then just press the Start Button to initiate the conversion process. But, if you want to make changes on audio before conversion, then use menus like Resample, Bit-depth, Compression Level, etc. to vary audio properties of input APE file(s).

Apart from audio, you can also convert and encode video from one format to another. In it, you can also find some handy features like a lot of Integrated Audio Codecs (FLAC, TTA, LAME MP3, FAAC, etc.), 2-pass normalization, CUE & MP3 playlist support, etc. 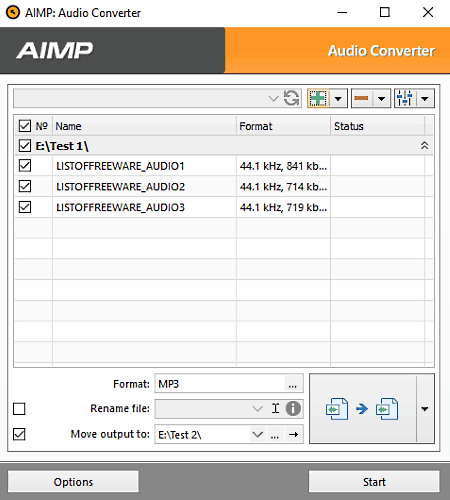 AIMP is another free APE to MP3 converter software for Windows. It mainly works as an audio player that produces a really high-quality audio with the added support to play audio from a video file. Still, you will not be able to watch the video in it. This audio player can handle more than 50 audio formats some of which are MP3, APE, OGG, WMA, FLAC, etc. It can also convert supported input formats into one of 9 supported output formats including MP3.

The Audio Converter is a small utility of this software that you can access from Menu > Utility section. This software has a straightforward conversion process in which you need to select the MP3 format from Format menu after adding the APE audio files. After that, press the Start Button to start the conversion. During conversion, you can notice that it processes two files at a time in a parallel fashion that reduced the overall conversion time. You can also modify audio properties namely, Sample Rate, Sample Format, Channels, and Audio Compression.

AIMP also supports scheduling; this feature comes in handy when you want your computer to shut down automatically at a given time or on a particular event, like at the end of the audio conversion. Besides scheduling, you can find more handy features in it like DSP manager, Audio Tag editor, Music library, Plugin support, and more. 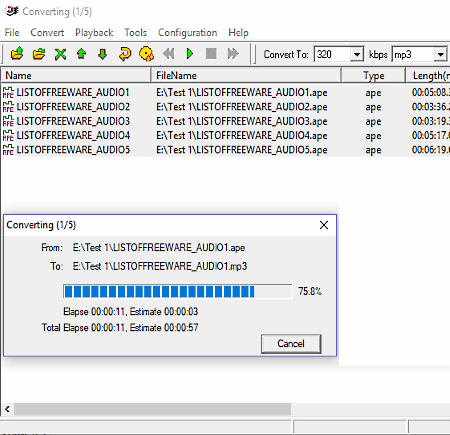 Power MP3 WMA Converter, as the name implies, is mainly an MP3 to WMA converter software, but you can also use it to perform APE to MP3 conversion. As input, this software can take audio files of various formats like WAV, WMA, CDA, AC3, AAC, AMR, and more. But as output, it only supports some selected formats namely, WAV, MP3, WMA, OGG, APE, M2A, and MP2 formats.

In here, you need to follow the standard conversion procedure to get the desired result like adding the APE files using Add file option, then selecting the MP3 from Format menu, and lastly, starting the conversion by clicking on the Convert button. This software can also perform batch APE to MP3 audio conversion.

In this audio converter, it is also possible to vary two important audio parameters namely, Bitrate (between 32kbps to 320kbps) and Encoders (MP3, OGG, and APE encoders). Plus, a Tools menu is also available through which you can rename and edit songs tags and also set task priority (either to speed up the conversion or to reduce the CPU usage to leave some room for other tasks). 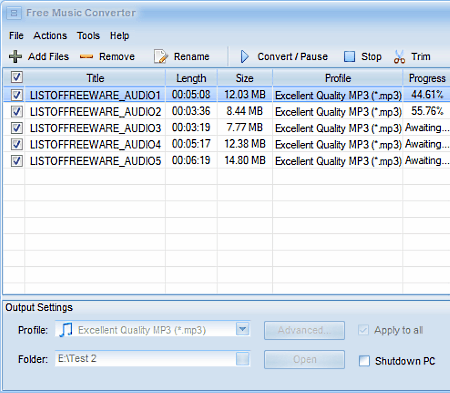 Free Music Converter is an audio converter software with the ability to convert APE files to MP3 format. Like other music converters, it can also perform audio conversion between files of various formats such as  AAC, AC2, AU, MP3, M4A, MP2, OGG, MKA, WAV, etc. Plus, you can also extract audio from videos of various popular formats (AVI, MP4, 3GP, WMV, etc.). Along with audio conversion, you can also increase the overall conversion speed by enabling the convert using all possible cores option from the Tools menu.

In this software, you can easily convert APE to MP3 by following few simple steps:

Some additional features of this software are Edit Tags (to change audio title, artist name, etc.), Merge (to join two or more audio files into one), and Trim (to cut a part of the audio). 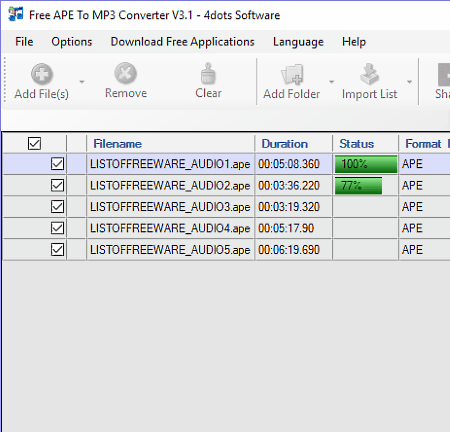 Free APE To MP3 Converter is a dedicated free APE to MP3 Converter software for Windows. It is specially designed to convert APE files to MP3. In it, you can also perform batch audio conversion to convert multiple APE audio files to MP3 format simultaneously. It is also perfectly capable to handle many audio formats both as input and output, like FLAC, WAV, AAC, MP3, AIFF, WAV, OGG, and more.

In this freeware, you can tweak some audio settings just before the conversion, namely Channels (mono and stereo), Sample Rate (from 11025 Hz to 48000 Hz), Bitrate (32k or 320k), and also the Metadata (Title, Artist, Genre, Track, etc.). A profile menu is also present on the interface that allows you to set the Quality (Low, Medium, High, Very High and Highest) of audio before conversion. After tweaking all the settings, just select MP3 format as the output from Format Menu and press the Start Conversion button to get the MP3 audio files.

This software also contains some handy tools like an inbuilt audio player (to play the audio before and after the conversion), Cut (to trim a part of the audio), Join (to merge two or more audio files into a single audio file), etc. 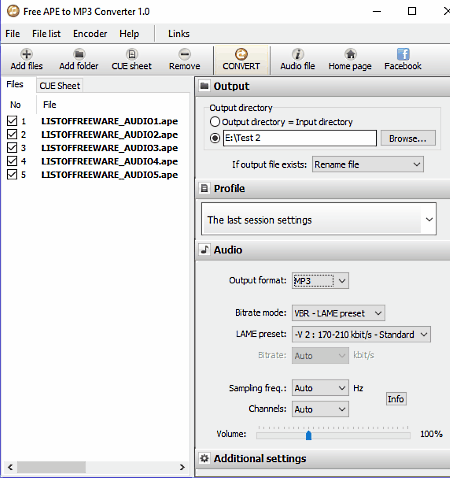 Portable Free APE to MP3 Converter is a free and portable APE to MP3 converter software for Windows. This software only supports APE and MP3 formats and you can either convert APE to MP3 or vice versa. Along with conversion, some audio parameters can also be tweaked in it, namely, Sample Frequency, Channels (mono and stereo), Bit Rate modes (CBR, VBR, and ABR), and Volume. Plus, an additional setting to cut a part of an audio is also available.

The conversion from APE format to MP3 is a straightforward process. Select the MP3 output format from the left side of the interface just after adding single or multiple APE files. Now, vary audio parameters if required and then press the Convert Button. After the conversion, you can listen to the audio using its inbuilt audio player. 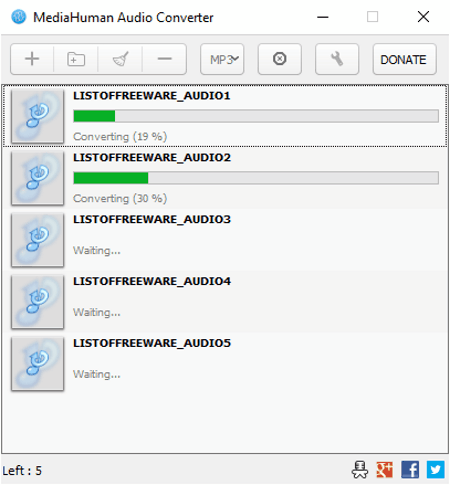 MediaHuman Audio Converter is a completely free and straightforward APE to MP3 Converter software for Windows. In it, you can easily add one or more APE files by dropping them directly to the interface. After that, you can select MP3 format and one of the various available audio profiles associated to MP3 such as stereo 44100Hz (320kbps, 256kbps, 224kbps, 192kbps,  128kbps, etc.). At last, press the  Start Conversion Icon to initiate the conversion.

This software not only converts APE to MP3, but also performs batch audio conversion between various audio formats like AAC, AC3, AIFF, ALAC, FLAC, M4R, OGG, MP3, and more. If you go to its Settings menu, then you will also be able to Schedule Tasks (do nothing or exit program), Limit number of used processors used during the conversion, set the path of output file folder, vary notification settings, etc.