Here is a list of best free APNG to GIF Converter Software For Windows. Using these software, you can convert any animated PNG file to an animated GIF file. APNG or animated PNG files are a lot similar to GIF files and they also represent motion just like a GIF. The main difference between GIF and APNG is that APNG takes less space and provide better color accuracy than GIF. Still, GIFs are much more popular than APNG and still widely used across the world.

With the use of APNG to GIF converters, you can not only convert APNG to GIF but in most cases, you can also edit and enhance input APNG before conversion. Most of the animated PNG to GIF converters are basically image editors which give you the advantage to work with images of various formats like PNG, JPEG, BMP, ICO, TIFF, etc. Plus, various image editing tools, especially the Layers tool, let you enhance every frame of input APNG file. After editing, you can Preview as well as save output as a GIF file in the desired location.

My Favorite APNG To GIF Converter Software For Windows:

AVS Image Converter is my favorite software because it lets you edit as well as convert animated PNG to GIF and vice-versa. Plus, it comes with handy editing tools along with a Preview section to enhance and preview the final APNG before actual conversion.

You can also check out lists of best free GIF To APNG Converter, Image Converter, and XPS to PDF Converter software for Windows. 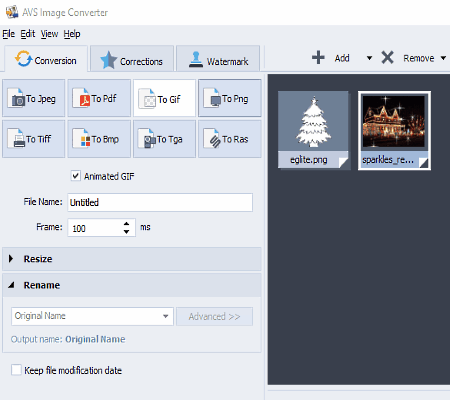 AVS Image Converter is a free APNG to GIF converter software for Windows. In this software, you can convert animated PNG files to animated GIF files. In it, you can also convert back GIF files to APNG file format. You can also perform image format conversion between various image formats like BMP, JPEG, TIFF, BMP, PNG, and more.

In this GIF to APNG converter, you can also perform batch conversion to convert multiple APNG to GIF at once. To simply convert APNG to GIF, first, add one or more animated GIF files from Files > Add option. Now, select the GIF option and tick Animated GIF checkbox. After that, vary the GIF frame rate or resize the file if required, before conversion. Lastly, press the Convert Now button to start the conversion.

In this software, you can also find two editing sections named Correction and Watermark to enhance input APNG file. Using these sections, you can apply Filters (sharpen, cold, warm, negative, etc.), change Contrast, add custom image watermark or text watermark, etc. to APNG file. After modifications, you can preview the final image in its inbuilt Image Previewer or save edited file in various supported formats including animated GIF. 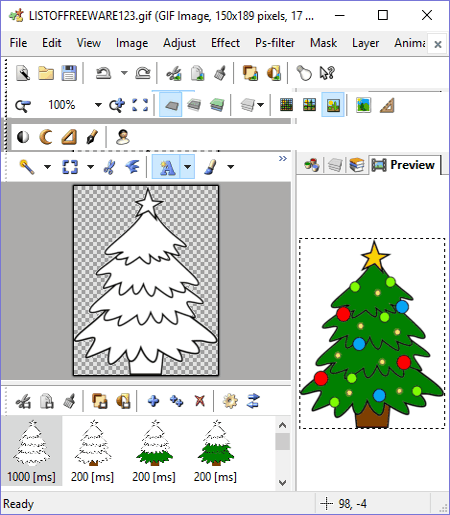 RealWorld Paint is another free APNG to GIF converter software for Windows. It is mainly a paint and image editing software through which you can make animated cursors, edit PSD files, create GIF memes, etc. Plus, it can also handle project files of popular photo editors like Photoshop, Paint.Net, GIMP, etc.

In this software, you can not only convert APNG to GIF but GIF to APNG conversion can also be performed. Apart from GIF and APNG, you can perform format conversion between various formats like JPEG, PNG, GIF, WEBP, animated WEBP, and more.

Besides format conversion, you can also add, edit, and enhance frames of APNG files using this converter. When you open an APNG file, an Editing section will open up below which, you can view all the frames of an APNG file. Along with frames, some handy options like ADD (to insert new frames), Animation Speed (to increase/decrease animation speed), Duplicate Frame, Cut Animation, Paste Animation, etc. are also present. Not just frames, but the content of each individual frame can also be edited through various editing and paint tools like Layers, Effects, Filters, Brush, Line,  Masks, Zoom, etc. After editing, you can view the running APNG file in the Preview section. Now, to save the APNG as GIF, go to File menu and select Save as option and save the file as GIF. 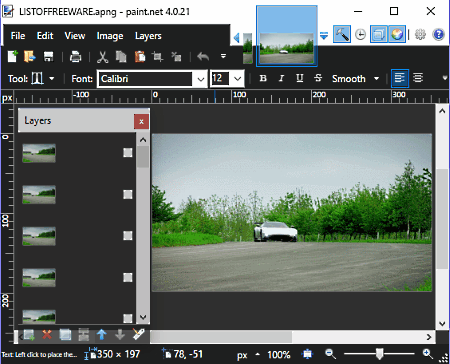 Paint.net is a completely free and popular image editing software for Windows. It can also be used to convert APNG to GIF. But, it does not natively support both APNG and animated GIF formats. In order to open and convert APNG to GIF or vice-versa, you need to install an external plugin. To successfully install this plugin to Paint.net, you need to follow few simple steps which are:

The conversion process from APNG to GIF is straightforward as you just need to save the APNG file as GIF format using Save As option. As this software is mainly an image editor, you can also edit frames of APNG files using Editing sections like Tools Panel, Layers, Color Picker, Effects, etc.

Not just APNG, but images of various formats like BMP, GIF, JPG, TIFF, TGA, ICO, PNG, etc., can also be edited. On the main interface, you also get a floating layers window in which you can view all frames of input APNG file. This Layers window also has some handy tools namely Add Layer (to add new frame), Delete Layer (to remove frames from animation), Copy Layer (to copy the same frame on to a new frame or on an existing frame), and Merge Layer (to merge two or more frames to one).

In this software, you can convert GIF to APNG, but you cannot play or preview the running GIF and APNGs. 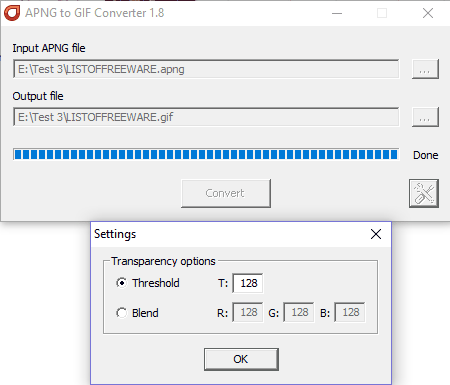 APNG to GIF Converter is a free and portable APNG to GIF converter software for Windows. Using it, you can convert one animated PNG file to animated GIF at a time. Its interface is quite simple and has only a few options on it namely Input APNG file field (to submit path of input file), Output File (output folder path), and Settings (to change image transparency by changing Blend and Threshold parameters).

In order to convert APNG to GIF, just provide the input and output folder paths in the respective APNG file and Output File fields. After that, you can vary the transparency of input file using Settings menu and press the Convert button. The conversion process will take only a split second to finish after which you can view the output GIF in Internet browsers and supported image viewers.