Here is a list of best free GIF to APNG converter software for Windows. As you know GIF’s are very popular to show animations, but it supports only 8-bit colors. 8-bit colors reduce the color accuracy due to which many people use APNG which supports 24-bit color images. Plus, APNG takes less space in memory which gives it a great advantage over GIF. So, to convert GIF to APNG format, use these software.

To convert GIF to APNG, I have compiled a list of five best free GIF to APNG converters. Most of these software are pretty simple where you get the desired APNG file by providing the GIF file as input. Not just one, but multiple GIF files can also be converted to APNG in some software. Some freeware are also capable of performing conversion between various formats like GIF, JPEG, BMP, TIFF, PNG, and more.

Some converters also act as image editors using which, you can enhance GIF’s using various available editing tools and then convert to APNG. In general, all of these software are pretty simple and effective to get the desired APNG output file.

Note: Animated PNG may not be viewed in commonly used image viewers, so use these APNG Viewers to view APNG files.

My Favorite GIF To APNG Converter Software For Windows:

AVS Image Converter is my favorite software because it not only converts GIF to APNG, but it can also convert APNG to GIF. Plus, its ability to support a lot of image formats along with editing features like Watermarks, Filters, Image Corrections, etc. are also impressive.

You can also check out lists of best free  3GP to MP4 Converter, WebP to GIF Converter, and PNG To ICO Converter software for Windows. 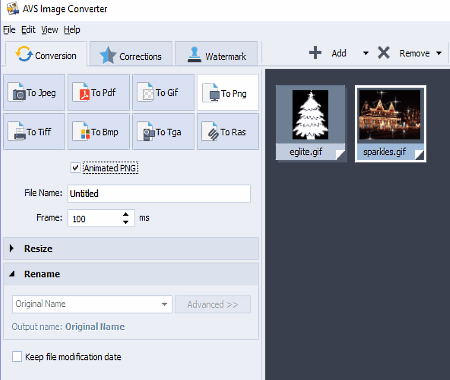 AVS Image Converter is a free GIF to APNG converter software for Windows. Using it, you can convert animated GIF files to animated PNG file formats. Not just GIF to APNG but APNG to animated GIF conversion can also be performed in this software. Besides APNG and GIF, there are various other image and project formats that this freeware supports as input like BMP, JPEG, TIFF, TGA, PCX, PSD, PDD, and more. Unlike input formats, there are only Eight supported output formats namely, JPEG, PDF, GIF, PNG (APNG), TIFF, BMP, TGA, and RAS. In this GIF to APNG converter, you can also perform batch conversion to convert multiple images from one format to another.

If you want to enhance or make modifications to the input GIF or image of any format, then you can checkout Correction and Watermark sections. In these sections, you can apply filters (cold, warm, negative, sharpen, etc.), contrast, add custom image watermark, text watermark, and more. After making modifications, you can preview the final image in the inbuilt Image Previewer or save image in one of the supported image formats.

Note: The output animated PNG will not show motion in various commonly used image viewer, so, I suggest you use Internet browsers, especially the Firefox. 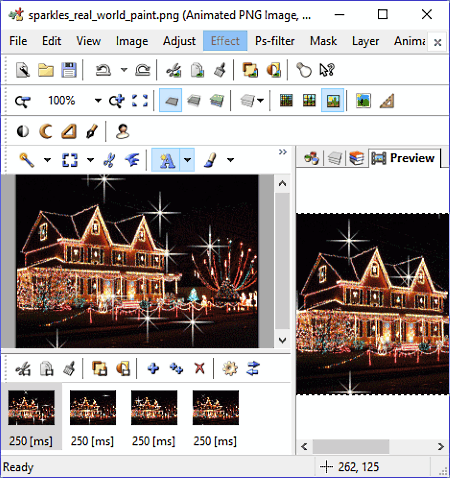 RealWorld Paint is another free GIF to APNG converter software for Windows. It can also be used to convert APNG file back to GIF. Plus, format conversions between various formats like PNG, JPEG, GIF, WEBP, animated WEBP, etc. can also be performed. The main advantage of this software is that it supports projects of various popular photo editors like Photoshop, Paint.Net, GIMP, etc.

Apart from simple conversion, you can also add, edit, and enhance frames of GIF files as well. When you open a GIF file in it, an editor section will open up, just below which you can view all individual frames of GIF file. Now, you can use various available tools like Add (to insert new frame), Duplicate (to make an exact copy of a selected frame), Animation speed (to increase or decrease animation speed), Reverse (to reverse frame order), Cut Animation, Paste Animation, etc. Now, if you want to further enhance each frame, then use common editing and paint tools from the top toolbar like Brush, Line, Layers, Effects, Filters, Masks, Zoom, and more.

After making all the modifications, you can view the final preview in the Preview section. Lastly, go to File > Save As and save the file as animated PNG. 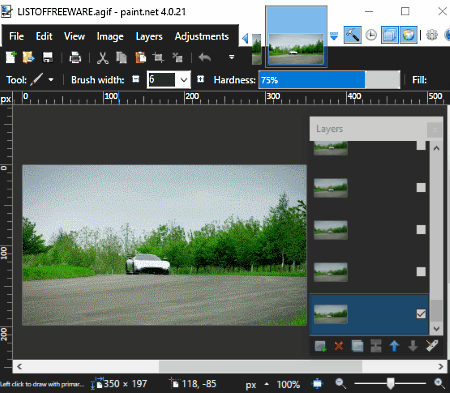 Paint.net is a free and popular image editing software for Windows. It doesn’t natively support animated GIFs and APNG files. To enable animated GIF’s and APNG support, you need to download this plugin. With the help of plugin, you will not only be able to open animated GIF’s and APNG files, but you can also convert GIF file to APNG and vice-versa. By following the few simple steps, you will be able to install this plugin successfully. Steps to install the plugin are as follows:

The conversion from GIF to APNG is very simple, Firstly, you need to open a GIF file in this software and then save the added GIF file as APNG using the Save as option. If you want to edit or enhance input GIF file, then you can use various available tools sections like Tools Panel, Layers, Color Picker, Effects, and more. Plus. you can also add, remove, and edit each individual frames of GIF using the Layers tool. Along with GIF and APNG, this software supports various other image formats such as BMP, GIF, JPG, TIFF, TGA, ICO, PNG, etc.

Overall, it is a really good and simple software with only one disadvantage that it cannot play the GIF and APNG files. Instead of playing the GIF or APNG in motion, it only shows one still frames of GIF on the editor section and other remaining frames in Layers tool floating window. 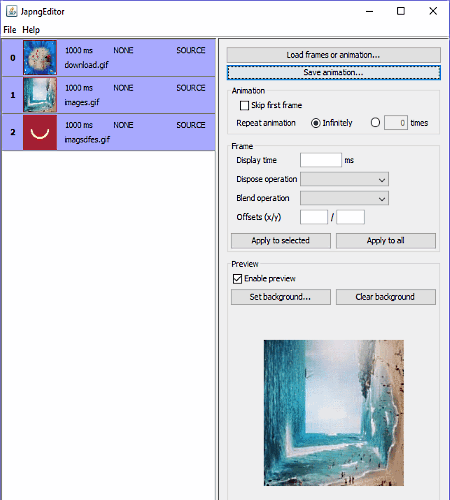 To convert GIF images to APNG, first, load all the GIF images that you want in final APNG by pressing the Load frames or animation button. After that, modify two APNG fields namely, Animation and Frame. In animation field, you can choose to skip the first frame of animation, limit the animation running cycles, and also select the repeat animation Infinitely. The Frame field lets you select the time of transition between frames and transition effect between images using Dispose and Blend operation menus. After making the necessary modifications, press the Apply selected or Apply all button and view the preview of APNG in the preview section. In order to save the animation, you need to click on Save animation button.

The output Apng may not run in every image viewer and editor software, so, I suggest you to use the Firefox browser to view the APNG file in motion. 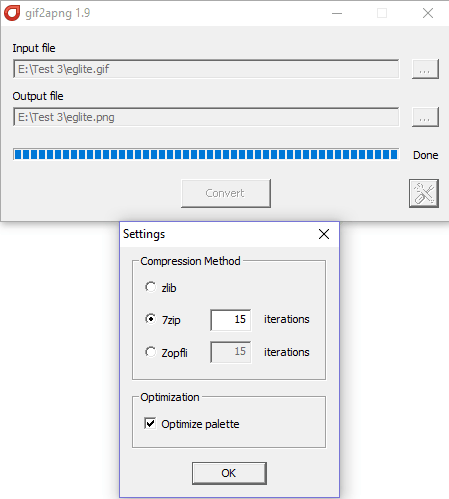 gif2apng is a free and portable GIF to APNG converter software for Windows. It is a straightforward software that comes with a very simple interface. In it, you just need to provide the path of input animated GIF image and output folder using Input and Output file fields. Now, just press the Convert button to start the conversion process which takes only a split second to complete.

Note: Use internet browsers like Firefox to view the animated PNG file as normal image viewers only show the still PNG image instead of animated PNG. 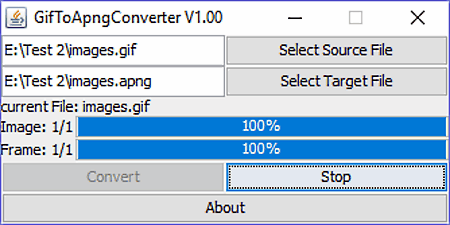 GIFToApng Converter is another free and portable GIF to APNG converter software for Windows. It is also a Java-based software that requires Java runtime environment to operate. Using it, you can convert one animated GIF file into animated PNG file format.

The interface of this software is very basic and compact that contains two fields, one is to input source file path and another one is to provide output file path. After providing both the paths, press the Convert button to start the GIF to APNG conversion. During conversion, you can also view the conversion process progress. Just after few seconds, you will get the output APNG file in the specified location.