Here is a list of best free GIF meme maker software for Windows. By using most of these meme maker software, you can easily convert a video into a fun animated GIF meme. To do that, these GIF meme creators let you select a certain part of the video that you want in the output meme. Most importantly, options to add funny texts on any part of the video is also present in them. Besides text, few of the GIF meme generators also let you add images to GIFs, which is another good feature. In some software, you can convert a normal animated GIF file into a GIF meme. To do that, these software provide tools to makes changes (adding text, images, etc.) on each individual frame of the GIF.

Using these freeware, you can also enhance the visual appearance of a GIF by applying filters, effects, etc. Plus, you can preview all the modifications quickly by using built-in preview players. Multiple preview players are also available in different editing sections of some software to make precise modifications.

Overall, these software are easy to use and all of these can handle various video formats like MP4, WMV, AVI, MPEG, and more.

VideoSolo Video to GIF Converter is my favorite GIF meme creator because it lets you add both texts as well as images to video to create a GIF meme. It’s ability to convert videos of various formats into GIF and its handy GIF enhancement tools make it my favorite. 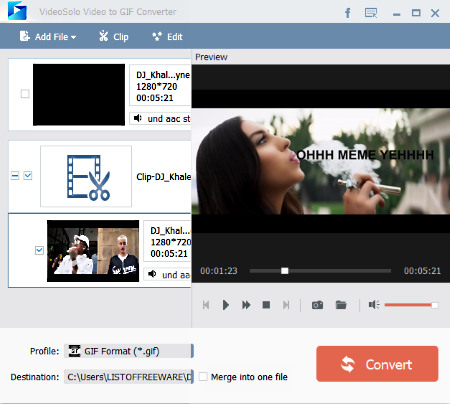 VideoSolo Video to GIF Converter is a free and easy to use GIF meme maker software for Windows. Using it, you can create animated or moving GIF using a video file. Plus, other essential tools like video trimmer and text tool are also available. Another handy feature of this software is that it supports a large library of video formats like MP4, MPEG, AVI, MKV, WMV, and more. With this software, you do not have to worry about video formats, just input a video and start making GIF memes in it.

How to create a GIF meme using VideoSolo Video to GIF Converter:

This freeware also provides multiple preview players or GIF players in various editing sections so that you can accurately trim video, place text and photos, etc., on the right part of the GIF. 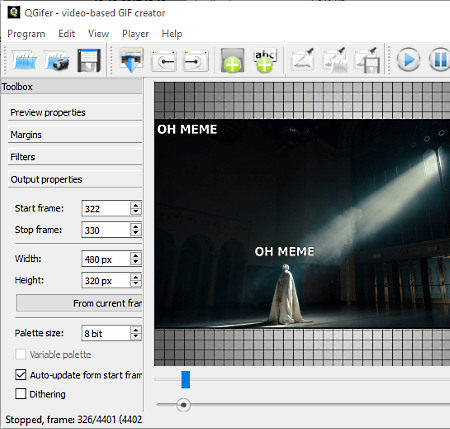 QGifer is another free GIF meme maker software for Windows. It is a video based GIF creator software in which you can create GIF meme(s) using video clips. For this, you can add text and image to the input video to make a GIF meme. Plus, features like video trimmer, filters, margins, FPS changer, etc. are also available in it.

Now to create a GIF, first, add a video file of one of the following formats named AVI, MP4, MPG, OGV, etc. After that, choose the start and end frame of video using start and stop selection tools. On the selected part of the video, you can add funny images and texts using respective tools from the top toolbar. On its preview window, you can view the changes in real time. Its preview window also provides a slider to jump between frames and also to know about the accurate frame number. 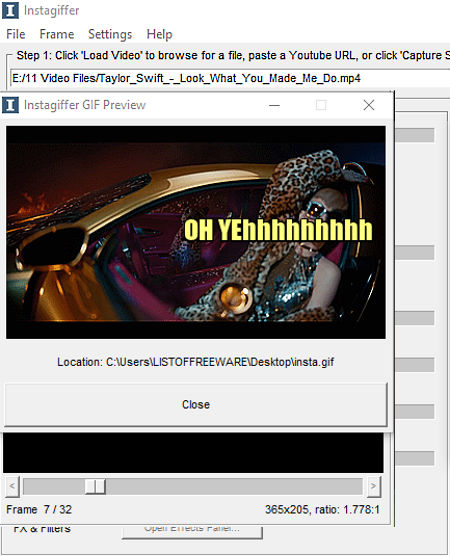 Instagiffer is yet another free GIF meme maker software for Windows. With the help of this software, you can convert a video into an animated GIF. Not just that, you can also capture an online video through this software and quickly convert that video into a GIF meme. Plus, all essential GIF making tools to add text, filters, loops, etc. are also available. Besides this, it’s property to support a lot of video formats (MP4, AVI, WMV, MOV, MPEG, etc.) is also impressive.

How to create a meme using Instagiffer: 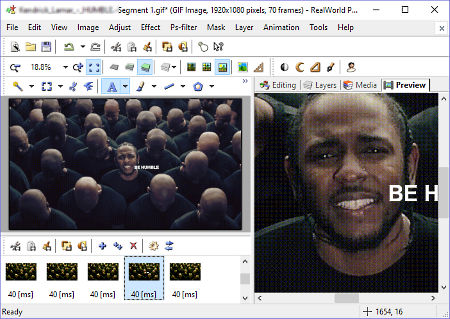 RealWorld Paint is a completely free GIF meme maker software for Windows. This software is mainly used to convert an animated GIF file into a meme GIF by adding text and effects. Still, you need to spend a considerable amount of time to make a meme through this software due to lack of start and end frame selection tools. Frame selection tools ease out the task by automatically applying a selected text or image on all frames between the start and end frame.

Overall, it is a nice GIF editor and that also serves as a photo editing software. You can also change GIF animation speed, create animated cursors, and do a lot more. 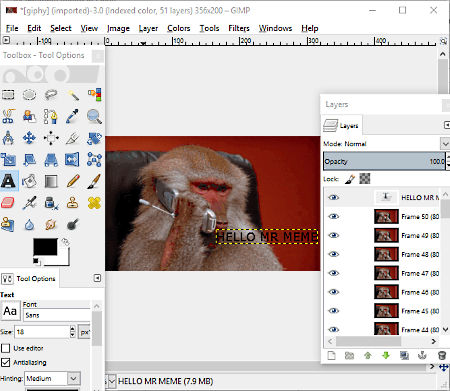 GIMP is a free and open source graphics editor software for Windows. It can also be used to make a GIF meme using a normal animated GIF file.

GIMP as a GIF Meme Maker:

When you enter a GIF file into this software, then all the frames of that GIF will appear in its Layers window, from where you can select one frame at a time and make necessary changes. Necessary changes mainly include the addition of text to give some context to the animated GIF file. As you know GIMP is a graphics editor, so you can also add layers, shapes, images, effects, filters, etc. to a GIF.

This freeware provides various editing tools through which you can crop, resize, rotate, and also make color adjustments to enhance the GIF. Moreover, the speed of animated GIF can also be increased or decreased through this software.

After making all the necessary changes on all GIF frames, export the GIF meme as an animated GIF file. Remember to tick the as animation checkbox at the time of exporting the GIF file to get the animated GIF memes. 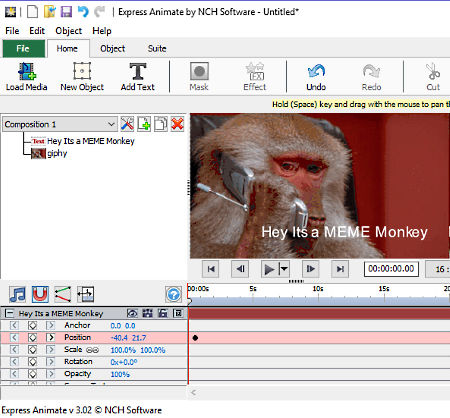 Express Animate is another free to use GIF meme maker software for Windows. This too lets you create an animated GIF meme from a normal animated GIF file. To create a meme, you can write funny text, add images, custom shapes, etc. to animated GIF. Plus, to enhance the quality, you can apply filters like greyscale, sepia, negative, posterize, etc. This software also has a really handy timeline editor just like a video editor, where you can drop or add various objects (text, images, etc.) and change the duration of each object with ease.

Let’s take a look at how to create a GIF meme using Express Animate: