Here is a list of Best Free Bending Moment Calculator For Windows. These free beam calculators are also helpful for educational purposes. The students in civil engineering can use these software to determine the shear force and bending moment of a beam. Also, they can learn to draw free body diagrams of a beam.

You can calculate bending moment of a beam by selecting the following data:

You can also change the units of measurement for bending moment.

EngiLab is my favorite bending moment calculator. It is an advanced calculator which comes with multiple features. You can apply three types of loads on the beam in order to calculate its bending moment. In addition to this, it draws five types of diagrams which include axial force, shear force, bending moment, and beam deformation diagrams. Another good part of EngiLab is it generates a detailed beam analysis report. 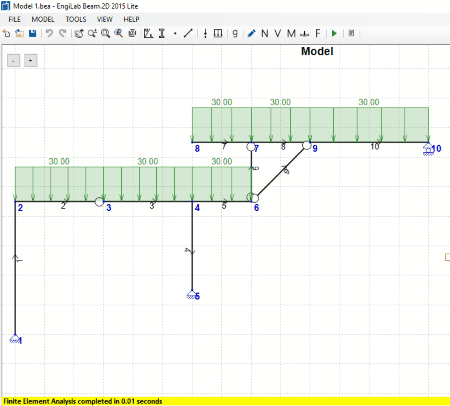 EngiLab is a featured bending moment calculator for Windows. Besides calculating the bending moment of a beam, it is also intended to draw axial force, shear force, bending moment, and beam deformation diagrams.

In its free version, you can draw a free body diagram of a beam with a maximum of 10 nodes. Various kinds of loads are provided in the software which include nodal loads, elemental loads, and body (acceleration) loads. These loads are available on the toolbar from where you can place them directly by clicking on the respective icons. You can also open the predefined block diagrams of the beams in the software for tutorial purpose. All these block diagrams are available in the example folder, which is accessible from the HELP menu.

After designing a free body diagram of a beam, click on Run Analysis button or press F5 key and let the software analyze the diagram drawn by you. The time taken by EngiLab to complete the analysis is also displayed. After the completion of the analysis, you can view axial force, shear force, bending moment, and beam deformation diagrams separately.

The best part of the software is it generates a detailed report of the beam analysis. In the Analysis result, you can view the data calculated on node displacements, element end forces, support reactions, and analysis validation report. In addition to this, you can also view full report here.

The Full Report section displays the analyzed data with explanation and all the beam diagrams mentioned above. 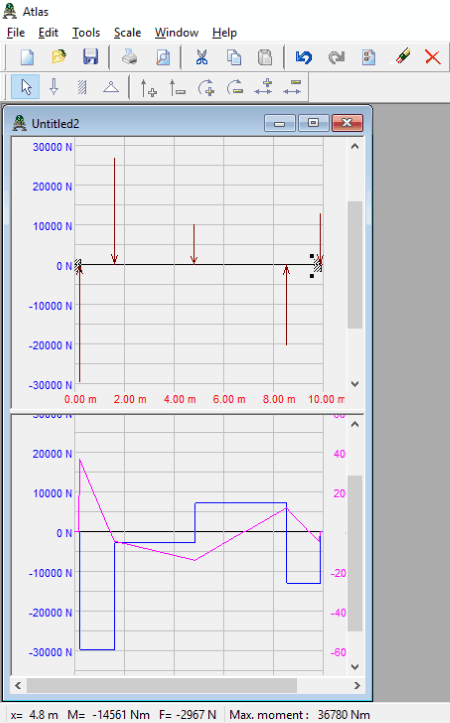 Every time you start a new project, you first have to select the length of the beam for calculation. After that, you will be represented with a straight line on a Force vs Distance graph. This straight line is the beam on which you have to put loads in order to calculate the bending moment. Use Force Tool to apply loads on the beam. If I talk about support, two types of support tools are provided, namely, Hinge Tool and Vice Tool.

This free bending moment calculator displays the result in both numerical form and graphical pattern. The graph represents both shear force and resulting bending moment. By default, the shear force graph is represented by blue color and the moment graph is by pink color. If you want to change these colors, go to Scale > Options. You can view the numerical values at the bottom of the software. As the shear force and moment vary at different points on the beam, you can know the force and moment at different points on the graph by hovering your mouse cursor.

You can save your project after completion. 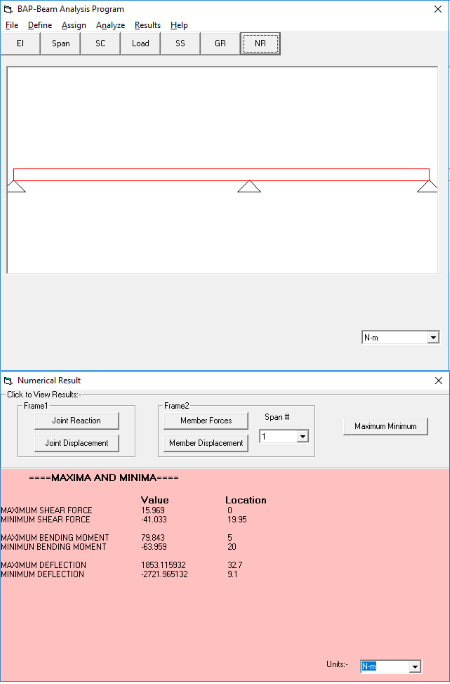 You can define the length of the beam and relative EI (Bending stiffness) in span properties, add new span, modify, or delete the existing spans. Click on the SC button to select the type of support. You can select free, fixed, hinge, or advance support. You can add load on the beam by clicking on the Load button on the tools menu. Also, you can select the type of point load to be applied on the beam.

After entering all the data, click on Analyze and the software will be ready to calculate the bending moment of the beam. Press NR button, then Maximum Minimum and you will get the minimum and maximum values of the shear force, bending moment, and deflection along with their location on the beam. You can also select the units of measurement from the list of units provided: N-m, N-mm, KN-m, KN-mm, lb-in, lb-ft, etc. 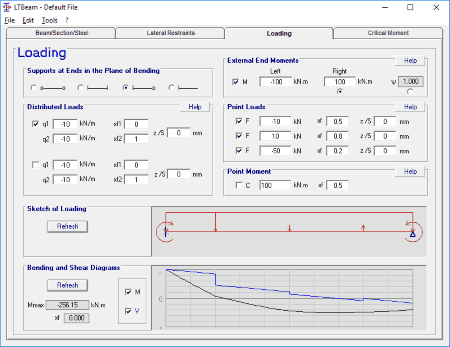 In this software, you can apply only two types of loads on a beam: point loads and distributed loads. Moreover, the number of point loads to be applied on a beam is limited to 3.

After entering the values of loads, click on Refresh button to draw free body diagram, shear force diagram, and bending moment diagram. The maximum bending moment is displayed in KN-m.

An additional feature of this software is it displays the 3D view of the beam.