Here is a list of Best Free BMP to DXF Converter Software for Windows. You can use these freeware to convert raster image in BitMap image format to vector graphics formats specifically DXF. Most of these are basically raster to vector image converter. Hence, you can convert BMP, PNG, JPG, TIFF, and other raster images to DXF and multiple other vector graphics like EPS, SVG, EMF, WMF, etc. You can also modify source BMP images prior to conversion to DXF using tools like resize, crop, mirror, rotate, flip, annotation, effects, filters, and more.

In one of these software, you can batch convert BMP to DXF which saves time and effort. There is also a command based converter on this list that lets you convert BMP to DXF using a simple command. So, users who prefer command line tools can use it for BMP to DXF conversion. You can also find a lot of additional handy features in these software, such as 3D model viewing, editing, and conversion, designs’ auditing, screen capture feature, and more tools. In general, these are capable software that come with an added functionality of converting BMP to DXF.

My Favorite Free BMP to DXF Converter Software for Windows:

pCon.planner is one of my favorite software as you can find a lot of advanced features in it. It can be used for modeling various 2D and 3D designs as well as to convert them.

Inkscape is another good one as it is quite straightforward in terms of use. 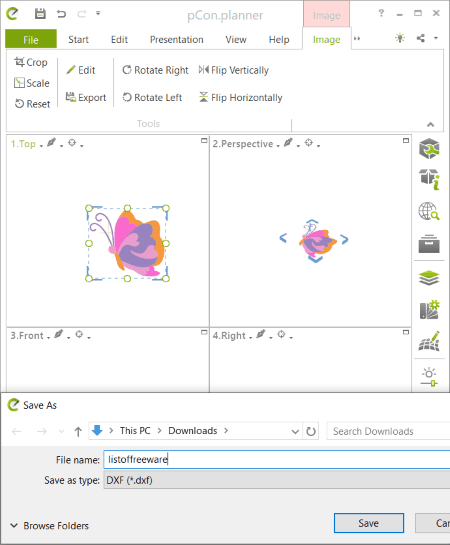 pCon.planner is a free BMP to DXF converter software for Windows. It is a versatile software that lets you view 2D/ 3D models, create/ edit models, and convert models from one format to another. It supports quite a number of input and output formats to do so, e.g., DWG, 3DS, OBJ, FBX, DAE, PDF, SVG, EMF, PNG, JPG, etc.

In it, you can easily open a Bitmap image and then convert it vector image in DXF format. It is quite easy to perform conversion through this software. You just have to follow a few steps. In addition to that, you can make modification to input BMP file before conversion. It provides basic shape drawing tools as well as advanced modeling tools like extrude, merge, subtract, stretch, slice, material editor, texture editor, etc. Multiple transformation tools including rotate, scale, 2D crop, mirror, etc., are also provided in it. It also contains an advanced set of model viewing features to view and analyze 2D/ 3D models. All in all, it is quite a feature rich software for 2D and 3D space planning as well as for handling existing designs.

How to convert BMP to DXF in pCon.planner:

It is one of the best BMP to DXF converter through which you can also view and edit BMP image before conversion. Plus, it supports various 3D model files to view, manipulate, or convert. 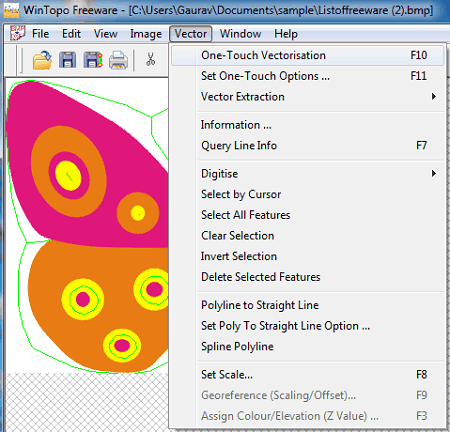 WinTopo is another BMP to DXF converter software for Windows. It basically vectorizes a BMP image and then you can save it in various vector image formats including DXF. The other output formats that it supports are WMF, EMF, SHP, ARC, etc. Also, it lets you convert other raster images to DXF such as PNG, JPG, TIFF, etc. You can also edit source BMP image prior to conversion with the help of tools like resize, rotate, crop, adjust brightness, contrast, gamma, etc., convert image to greyscale, etc.

How to convert BMP to DXF in WinTopo:

It is a simple yet effective BMP to DXF converter as it provides desirable results. You can also use it to convert various other raster images to supported vector graphics. 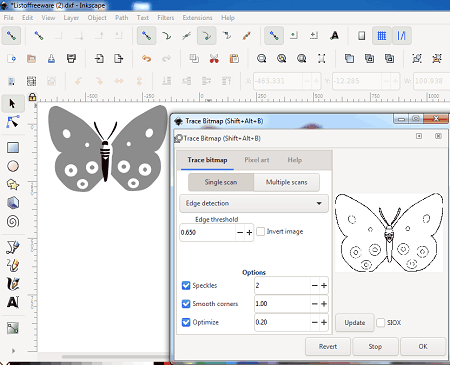 Inkscape is an open source BMP to DXF converter software for Windows, mac, and Linux. It is a famous vector image editing software that also provides an option to convert images from one format to another. It is quite easy to perform conversion through this software as you just need to open a BMP image and then save it in DXF format using a dedicated feature. Additionally, if you want, you have the flexibility to edit BMP image before saving it in DXF format. Tools like shape, freehand, and line drawing tools, tweak objects, edit paths, sculpting, calligraphic, gradients, fill color, transformation, image filters, and a lot more.

How to convert BMP to DXF in Inkscape:

Inkscape is another nice BMP to DXF converter which can be used to view, edit, create, and convert various vector graphics. 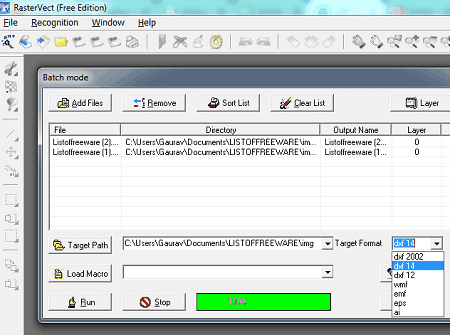 RasterVect is yet another BMP to DXF converter software for Windows. It is basically a raster to vector converter which can convert images from raster image format to vector ones. It supports a lot of input and output file formats for that including PNG, TIFF, JPG, BMP, raw images (raster images) and DXF, EPS, EMF, WMF (vector images). The advantage of this software is that it provides a batch conversion feature that lets you convert multiple BMP images to DXF format at once.

You can also edit a BMP image before conversion by simply opening it and then using its Save Vector File option. It provides editing features include crop, resize, rotate, flip, effects, filters, drawing tools, etc. But in that case, you will be able to convert single file at a time. To convert a bulk of BMP or other supported images to DXF, follow below steps.

How to batch convert BMP to DXF in RasterVect:

In its free version, you’ll face some feature limitations which you can remove by purchasing its upgraded version.

RasterVect is a batch BMP to DXF converter software that anyone can use to convert a set of raster images to DXF and other vector image formats. 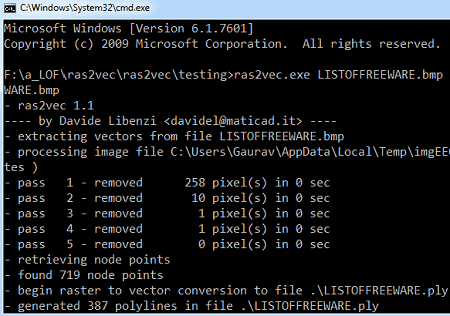 Ras2Vec is one more free BMP to DXF converter software for Windows. As its name suggests, it is a raster to vector graphics converter that supports BMP and TIFF to DXF conversion. To convert BMP image, it supports only 1 bit x pixel (1 bpp) BMP image format.

It is a command line software, hence to convert images to DXF, you need to run a command. Let’s check what is the command that you need to use to perform conversion through it.

How to convert TIFF to DXF using command:

It supports only 1 bpp BMP images.

It is a command based BMP to DXF converter that lets you convert images using a simple command.