Here is a list of Best Free Cartoon Story Maker Software For Windows. Using these freeware, you can create interesting cartoon stories for kids or comic readers. Some of these cartoon story makers can also be used to create animated cartoon stories.

While a few of these provide preloaded cartoon characters to use in your stories, others let you import images of cartoons to do the same. The supported image formats include the popular ones like JPEG, PNG, BMP, GIF, etc. You can also add a background image to create a desired environment. Many of these are storyboard creators which can be used to create cartoon stories as storyboards. Multiple scenes or frames with captions, dialogues, descriptions, titles, etc. can be added to a cartoon story. Audio file (MP3) can be added as background music or dialogues in some of these cartoon comic maker software.

One of these is a featured animated story maker which can create a cartoon movie. It lets you add a scenario, characters, objects, environment, audio, etc. and create a full video of the created scene.

Most of these let you print the created cartoon story or export it as a PDF file. Other export file formats differ for individual software. Some of these include image (PNG), animated GIF, video (MP4, AVI, etc.), etc.

You may also like some best free Script Writing, Story Writing, and Novel Writing software for Windows. 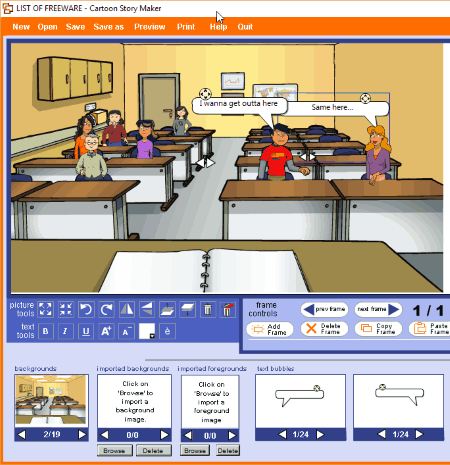 Cartoon Story Maker, as the name implies, is a featured cartoon story maker for Windows. It is quite easy to use as the main interface contains all primary tools required to create a cartoon story. These include cartoon characters, backgrounds, text bubbles, audio bubbles, etc. You can create multiple frames with different cartoons to create a full cartoon story.

Apart from preloaded characters and backgrounds provided by this cartoon comic maker, it also provides the flexibility to import them in image formats (JPG, GIF, PNG) as backgrounds and foregrounds elements. So, you can easily create a desired comic using it.

Now, let’s have a look at the steps to create a cartoon story using Cartoon Story Maker:

Using the above steps, you can add multiple frames to your cartoon story.

Although it provides features including a preview button and an option to save your cartoon story as an HTML file, these features didn’t work fine while testing. The only export feature that worked was Print button. Using it, you can print the whole story or save it as a PDF.

Cartoon Story Maker is one of the best free comic story maker software in this list. It creates quite a high-quality PDF of your cartoon story which you can share with others. Personally, I loved creating a cartoon story in it. 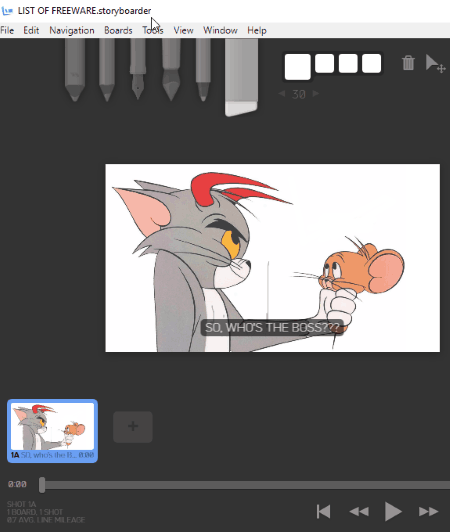 Storyboarder is basically a storyboard software which lets you visualize your story. It can be your another alternative to create a cartoon story as storyboards. You can create stories using pictures of your favorite cartoons. This software also lets you create animated cartoon stories. Interesting, right? Keep reading to know how.

The good part of this cartoon story maker is that it supports a good range of output formats to save your cartoon story.

Storyboarder is a nice and useful interactive story maker software for Windows users. 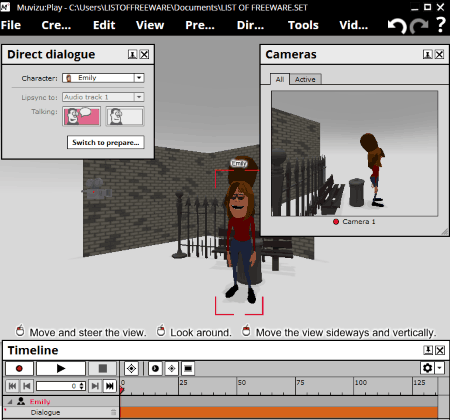 Muvizu is another alternative for PC users to create an animated cartoon story. Using it, you can create a cartoon movie. Although it is a commercial software, it provides a free trial version which can be used to evaluate this software. This version is not time limited, but it has a lot of feature limitations, e.g. only one scene can be created for a project, final video contains a watermark, etc. You can view the comparison between its evaluation and paid versions on its download page given below.

As you add a scene, it lets you pick a scenario from various inbuilt ones. Almost all of these scenes are not available in the free version, the only free one is Park. You can also add an empty scene to start from the scratch. Now, you can create characters (man, woman), objects (cardboard box, bench, fence, fire hydrant, boulders, pebbles, etc.), backdrop, and light (point light, spotlight, point dark, etc.). A few extra free characters and objects can be found in Create > Favorite section. You can now add audio files to the project and prepare dialogues for different characters. In addition, you can prepare camera cuts, camera movement, character actions, character properties, object properties, and object movements. From the Direct menu, you can find tools like dialogue, sound effect, characters eyes and head, etc. to create a desired animated cartoon movie. A timeline is provided for you to make accurate changes to your story. For the beginners who have little or no knowledge of video editing, here is a Muvizu Tutorial.

You can lock a character to avoid further editing. It also provides options to edit environment properties like ambient light, sky, ground, shadow, etc. The View menu contains various options to view and navigate through the created scenes, like hide effects, look at, move to, build static lighting, etc. A Camera is provided which serves the same purpose as a real-world camera i.e capturing a scene at a particular angle.

After creating the animated cartoon story, it lets you export the video as MP4, AVI, or Image Sequence file. While doing so, you can customize size (maximum 720×576), bitrate, etc. The video contains a watermark which can be removed only by buying this software.

Muvizu is quite a nice animated cartoon story maker software, but it requires some professional video editing and filmmaking skills to create a cartoon story. You can checkout the above shared tutorial before you start creating animated stories with this software. 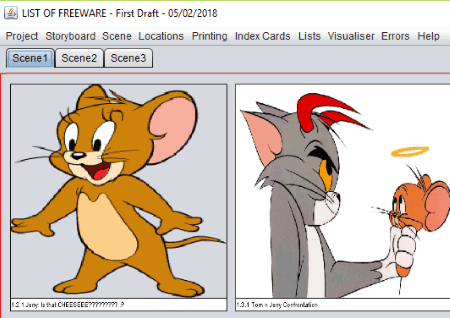 JStoryboard Tools is a free, portable cartoon story maker software for Windows. It is a JAVA based application which lets you create storyboards. In this software, you don’t get preloaded cartoons. So, you need to import images of cartoons to create a comic story. The modules you get to configure the properties of your cartoon story are:

Now, let’s checkout the step by step procedure to create a cartoon story:

You can repeat above steps to add different frames to a scene and various scenes to your cartoon story.

A Visualizer option is present on its interface to let you play created scenes as storyboards. While doing so, you can customize transition effect (cut, dissolve, fade thru, wipe, pan, etc.), display seconds, steps, etc.

You can save your story in its own project format. Apart from that, you can print the created cartoon story and using the same option, you can save it in PDF format. Print related settings can also be modified like margin settings, title and page-numbering, gaps between storyboard, font, etc. Also, you have the flexibility to print a particular scene or storyboard, or you can even print storyboards by locations. In addition, it also lets you print the story as index cards.

JStoryboard Tools is another good cartoon story maker for Windows. It also provides a handy tool to view error log. 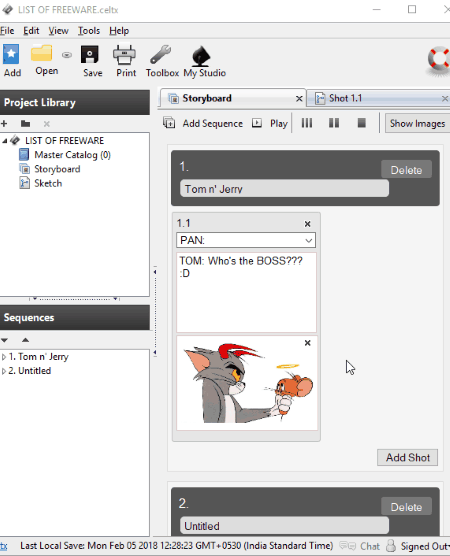 Celtx is a feature-rich media projects writing software for Windows. It also provides a Storyboard tool using which, you can create a cartoon story. Just follow these steps in order to make your own stories with cartoons.

Celtx is great software which can be used by writers to create screenplay, script, novel, etc. projects.