These character creators can create all types of characters. However, using them is quite complex, especially due to the presence of a large number of tools. Plus, to work with some software, you definitely require some prior knowledge about them. Apart from 3D character creation, you can also create 3D animation and 3D models with these freeware.

MakeHuman is my favorite character creator software because it allows you to quickly create characters using inbuilt base models. Plus, defining posture, facial expressions, gender, clothing, etc. is also easy when compared to other software. Plus, its ability to produce realistic looking human character is also quite impressive.

You can also check out lists of best free Cartoon Maker, 3D Animation, and 3D Modeling software for Windows. 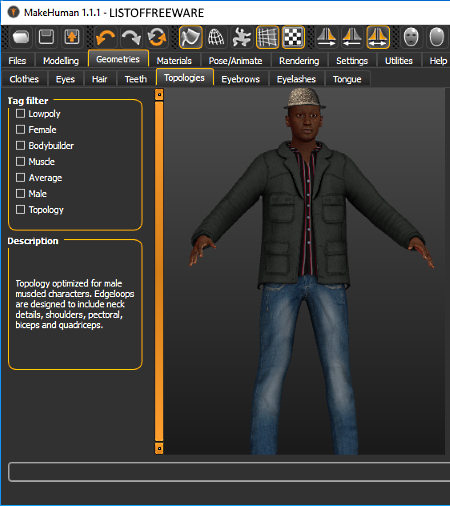 MakeHuman is a free character creator software for Windows. This software is mainly used to create 3d human characters of different genders and ethnicity. It makes designing and creation of a 3d human character really easy. By default, this software provides a basic human structure on the interface using which you can create a complete human model. Besides various 3D models, you also get multiple fields to add various attributes to the model.

Let’s take a look at features to create character model and make it look more realistic:

Apart from these main fields, it also provides a set of handy tools on the toolbar like Front View, Back View, Top View, WireFrame, Smooth, Symmetry, etc. Overall, it is comparatively easy to use character creator software than other similar software. 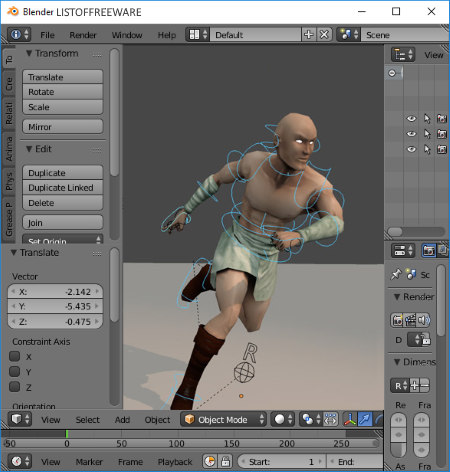 Blender is a free and open source character creator software for Windows. It is quite a popular and advanced software which is used in 3D Modeling, 3D animation, 2D animation, Simulation, VFX, Game Creation, Video Editing, Rendering, Scripting, etc. You can do a lot of things including 3D character creation with this, but it is quite difficult to create 3D characters with this software. So, I recommend you to refer to this character modeling tutorial before you start creating characters using Blender.

In this software, you can create a character by importing and scanning a picture of a real human, by importing 3D model files (3D Studio, X3D, etc.), and by using some predefined solid models like Sphere, Cylinder, etc. Plus, a lot of additional tools is also provided by it to carve base solid models or 3D files into a character.

Some of the important tools to create 3D character are:

After creating a character, you can save or export it as 3DS, FBX, PLY, X3D, STL, etc. formats. 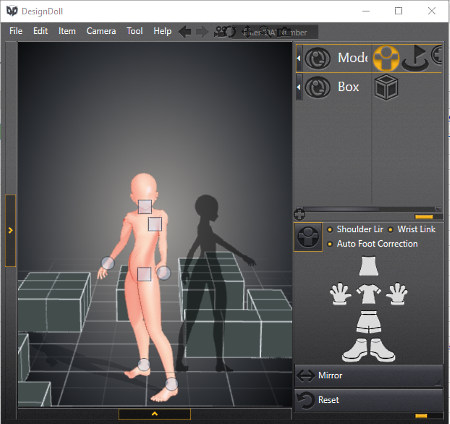 DesignDoll is another free character creator software for Windows. Using this software, you can create 3D doll models with varying postures. In it, you get a generic doll model as the base that you can modify to create characters. Besides this, you can import external 3D structures or models as well to add the base model.

When you first launch this software, you get a default doll model on the main interface. You can easily change the posture of the model by changing the Model Tag. Model Tag basically enables visual joint movement points from where you can change postures of joints and body. Some more tags like Positioning Tag to change the position of the model, Scale Tag to control the length and thickness of each part of the model, etc. are also available. These are the basic tags to set the posture of a doll according to your liking. Apart from tags, you also get three important sections named as Item, Camera, and Tool to make further modifications to the model.

Let’s take a look at these sections and what they offer:

Once the doll model gets completed, you can export it as 3d models, flat Models, or save it as TWD file. 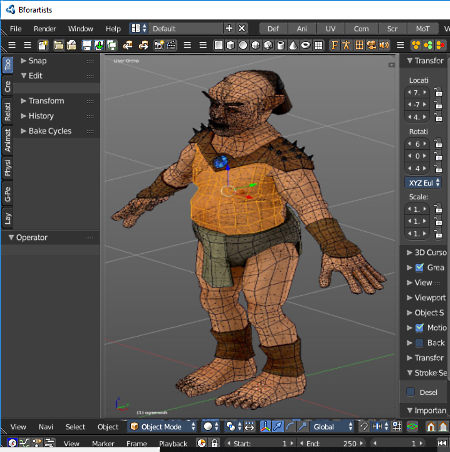 Bforartists is the next free open source character creator software for Windows. This software offers a complete 3D suite to create 3D content. In it, you can create game graphics, prerendered movies, and stills. In terms of its functionality, it is quite similar to Blender which offers the same set of features and tools. This software also uses base 3D models to create characters. However, you can also create a complete character from the scratch with this software. You can import external 3D files of mainly 3D studio, X3D, FBX, etc. formats. Once a model gets imported, then you can view it in various layouts like Animation Layout, UV Layout, Compositing Layout, Scription Layout, etc.

To create a character through this software requires a lot of skill and I recommend you to use these tutorials to know more about working of this software and ways of creating characters using it. Similar to Blender, it also possesses a ton of tools which directly contributes to the complexity of this software. However, for experienced users, it is an ideal software to create 3D characters and animations. 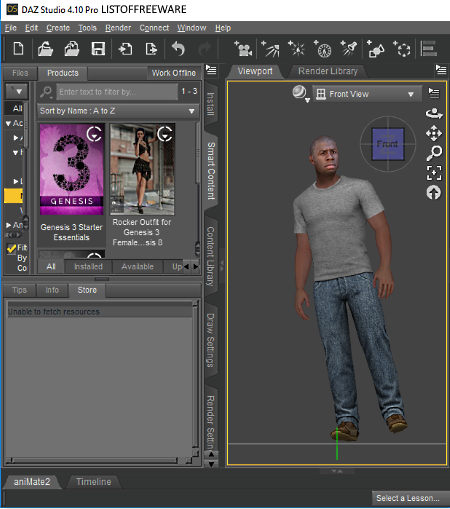 DAZ Studio is the next free character creation software for Windows. It is a very comprehensive software and is used to create 3D characters from the scratch. To create characters, it provides a dedicated set of tools on the left part of its interface. Some important tools provided by it are Figures (to select a base model based on Gender), Hair (to select different types of hairs from the model), Anatomy (to select internal and external structure and posture of model), Wardrobe (to select clothes for your model), Lights (to change light source), etc. These tools make the task of character creation really easy. In it, you also get tools to easily move and look around the model like Universal tool, Rotate tool, ActivePose Tool, Scale Tool, and etc. Once your 3D character gets completed, you can export it as FBX, BVH, DAE, CR2, U3D, etc. formats. Overall, it is another good character creator software that makes character designing easy compared to various other software. 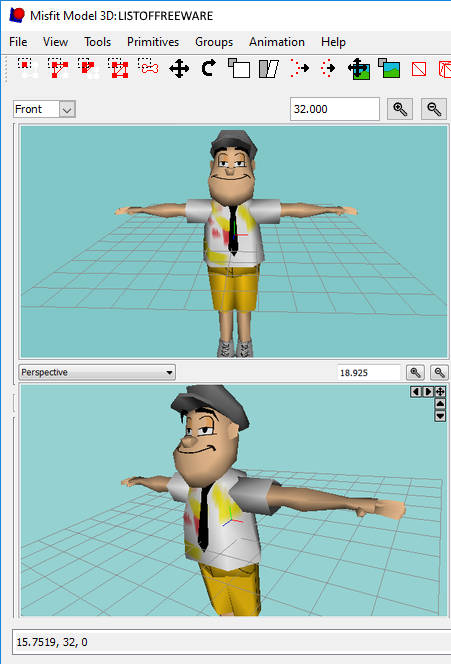 In this software, you can import basic 3D character models (mm3d, ms3d, md2, etc.) to create a cartoon character, human character, etc. Once the model gets imported, you can immediately view it on the main interface. Now, use its various tools tabs namely Tools, Primitives, and Groups, to shape the base model as a character. In Tools tab, you get tools like undo, redo, create rectangle, bone joint, polygon, etc. Primitives tab provides features like subdivide faces, make face from vertices, align selected, duplicate, and more. The Groups tab helps you edit character material, metadata, multiple elements of characters, and texture coordinates. After the creation of a character, you can save it as mm3d, ms3d, md2, and obj formats.