This article lists Best Free Fake File Generator Software For Windows. Using any of these freeware, you can create dummy files or fake non-working files for various reasons, e.g. to fill up disk space to avoid viruses/worms, to simply fake, etc. Almost all of these are portable fake file generator. Hence, you just need to run .exe file of respective software to generate fake files.

While many of these fake file generator software are able to create fake files in a bulk, others can create only a single fake file at a time. While creating dummy files, you can specify output folder, filename with extension, file size (bytes, KB, MB, GB), fill pattern (null, a character, string, etc.), file attributes (Hidden, Archive, Read-only, System), etc.

There are some fake file generator software which create a fake file using a simple command. Scroll down to know more about them.

Create Dummy File is my favorite fake file creator. You can create dummy files of variable sizes at once. Plus, you get to choose various parameters of output fake file, like fill pattern, file attributes, etc. 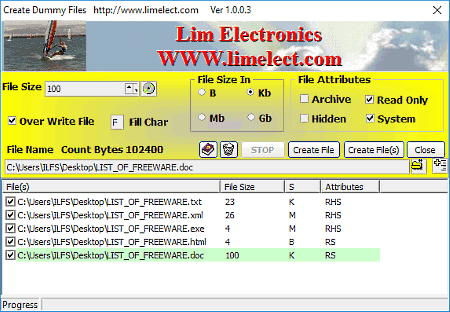 Create Dummy File is a free fake file generator software for Windows. Not one, you can create multiple fake files in a matter of few clicks. It has a pretty simple and intuitive user interface; so you can easily generate dummy files.

The Good part of this dummy file creator is that it lets you create multiple fake files of variable sizes at once. Let’s check out how.

Enter desired File Size, specify its unit (bytes, KB, MB, GB), select File Attributes (Hidden, Archive, Read-only, System), enter Fill Character, and browse for the desired output location and give the filename with extension. Now, click on the Add File To List option to add the file to the list of fake files to be created. You can add multiple fake files with variable sizes and attributes in the similar manner. Now, simply check the respective dummy files and click Create button. All fake files will be generated at the specified location with specified size.

Create Dummy File is one of the best fake file creator software. You get to customize various parameters of fake files, and also get to create dummy files of variable sizes at once. It is a portable fake file creator. 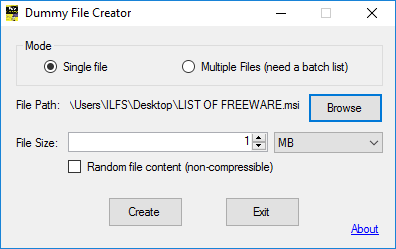 Dummy File Creator is a free fake file generator software for Windows. You can create one or multiple fake files using this software. To create a single fake file, choose Single file mode, browse the destination folder, specify output filename with file extension, and enter size in Bytes, KB, MB, or GB. As simple as that.

To batch create dummy files, first, select Multiple Files mode. Now, you need to import a text file containing names of each fake file. But, the list should be created in a predefined format which is as below:

After importing the text file, click on Create button. The fake files will be created at the specified locations.

Dummy File Creator is another good option for a fake file generator, with a simple user interface. 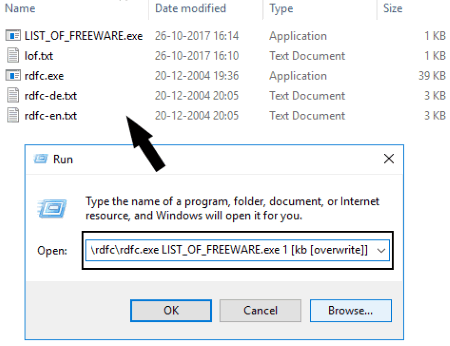 Random Data File Creator is a console application to create dummy files. You can use it with a console window under Windows, the dialog Execute, Visual Studio, etc. I used it with the Run Command.

Let’s see how to use Random Data File Creator as a fake file generator:

In the above command, you have to give full path of Random Data File Creator program file, fake filename with extension, file size, and unit as Byte, KB, MB, or GB. Overwrite is used to replace an already existing file with the same name. If a file already exists and overwrite is not added to final command, the application stops working. An example of a command to generate fake file using this software is given below:

If no output path is given, the fake file will be created in the downloaded Random Data File Creator folder.

During my testing, the files were being created in bytes no matter which unit is specified. So, if you need a file of size 1kb, write 1024 as file size. 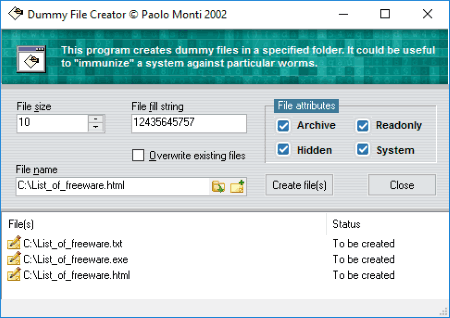 To generate fake files, specify file size, enter a string to fill the file with, and provide the location of output with its name and extension. In this manner, you can add multiple fake files to be created. Also, you can choose file attributes as Hidden, Archive, Read-only, and System. You can also choose to overwrite an already existing file. Finally, click on Create Files button to start the process of generating fake files. The status of each file is displayed on the main interface.

Like other software, NOD32 Dummy File Creator is also a portable dummy file creator. As you add a file individually, you have the flexibility to specify different parameters for different fake files. 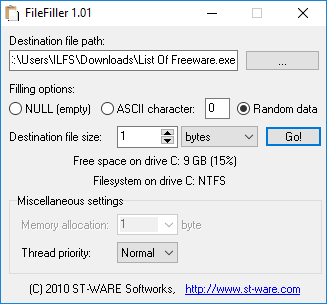 FileFiller is another good fake file generator software. It is portable and lets you create a single fake file at a time.

On its main interface, you can view free space available in C drive, and also filesystem on C drive. So, you can easily decide the size of fake files you need. From its main interface, you can browse the desired destination folder. While doing so, you need to give filename with its extension. Now, you can choose a Filling option as to whether you want to fill the fake file with a NULL character, an ASCII character, or a random value. After that, you need to choose file size (bytes, kb, mb, gb) and click on Go! button.

FileFiller is another good dummy file creator. It lets you set thread priority to Lowest, Low, Normal, High, or Highest. 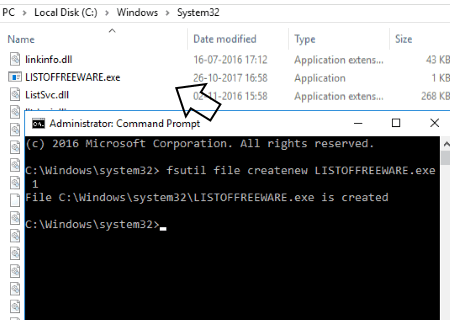 If you don’t want to install an additional software, you can use Windows Command Prompt to create dummy files. How? Let’s see.

Fsutil is an inbuilt tool for Windows, which is basically used for managing partitions and volumes. This tool is capable of creating fake files. It needs administrative privilege to function, so you need to run Command Prompt as Administrator.

For example, if I want to create a fake file with filename LISTOFFREEWARE.exe and size 1 byte on Desktop, the command will be:

Fsutil is command based utility tool which performs tasks related to file system. You can manage sparse files, a volume, object identifiers, etc., create a hard link, search a file using its security identifier, and do more. You can know more about it here > Fsutil. 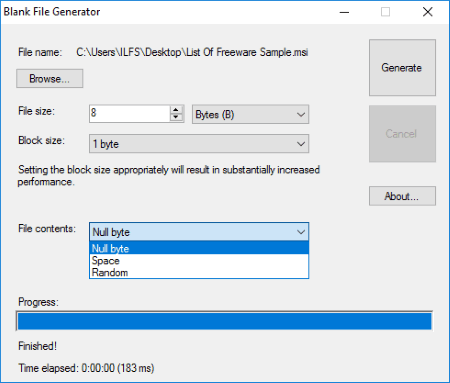 Blank File Generator is another free dummy file creator software for Windows. The process of creating fake files is quite similar to that of other discussed software. You need to select an output directory and specify output filename with file extension. After that, just specify the file size (KB, MB, GB), and also Block Size. You can fill the file with random strings, space, or null byte. Hit the Generate button to finish the process of generating a fake file. 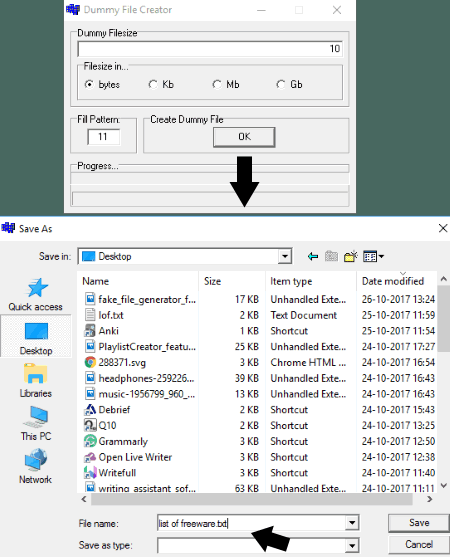 Dummy File Creator is an easy to use fake file generator software for Windows. To create dummy files, you just need to enter file size, unit (bytes, KB, MB, GB), and Fill Pattern. After specifying these parameters for a fake file, click OK and give path and filename and click on Save button. It is as simple as that. You cannot create multiple fake files using it. 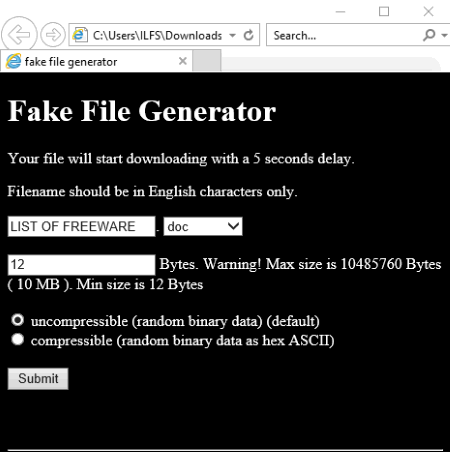 Fake File Generator is yet another free file generator software in this list. It works in a browser. You need to run its HTML file in order to generate a fake file. Simply add a file name and choose a file extension (pdf, doc, docx, xls, odt, rtf, zip, etc.). After that, you need to specify file size in bytes. Minimum file size can be 12 bytes, while maximum can be 10 MB. The data to fill the fake file with can be random binary data (uncompressible) or ASCII data (compressible). As you click on Submit button, the file will be downloaded and saved in the default Download folder. 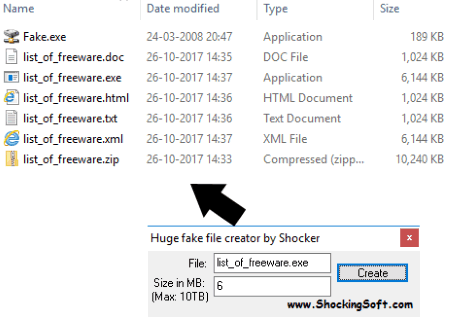 Huge Fake File Creator is the simplest fake file generator software in this list. It comes in a compact interface as you can see in above screenshot. You just have to mention filename with extension and size in MB. The maximum size of a file can be up to 10TB. It creates fake files in its own folder.