Here is the list of best free flight simulator games for PC. These airplane simulator let you simulate flight under realistic conditions. You will get to fly commercial aircraft, fighter planes, RC planes, gliders, helicopters, drones, and more. Moreover, you get to simulate flights around various parts of the World, inbuilt maps, or even on maps designed by you. Some of these simulators just let you fly freely, some will let you take off and land airplanes, while some will take you right into action in a battlefield.

Various simulation modes are provided by these software. You can play as a single player or engage in a multiplayer battle. If you are looking for great graphics, realistic flight control, and some action, then you must try out the combat flight simulator games mentioned below. If you just want to fly around and experience flight simulation, you have some great options mentioned here as well.

There is no doubt that Digital Combat Simulator World is one of the best flight simulator out there. In terms of simulation, realism, visuals, and combat, this simulator leaves others way behind. Extreme Landings is another airplane simulator with realistic simulation and visual details. 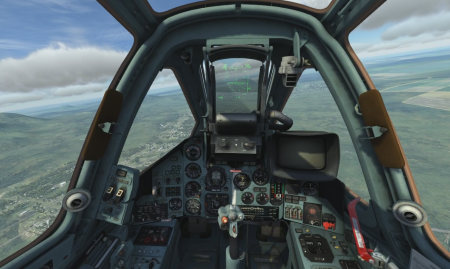 This simulator can be played in various modes. You can begin playing in Instant Mode, Create missions to play, play already available missions, start a Campaign, or play in Multiplayer mode. A training mode is also available for you to learn simulation. Talking about the training, it might take a while for you to get used to all the controls and learn how to fly. While simulation, press Esc key and access the Controls menu to view the exhaustive list of controls, which can be edit according to your choice.

If you want, you can get more maps, fighter planes, and various mods for this game, all for free. 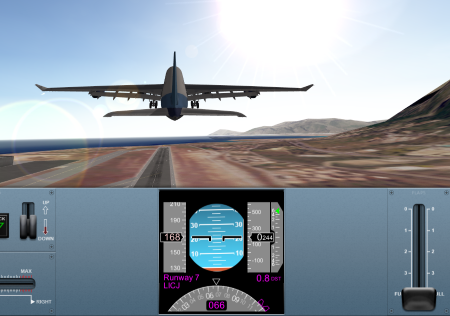 Extreme Landings is an amazing and free flight simulator Windows 10 app. It is one of the best flight simulation software in this list and gives you realistic flight simulation experience. Here, you get the experience of take off, landing, handling engine failure, handling windstorm, handling gear trouble, and more. For realistic experience, you are presented with actual cockpit equipment, which none of the mentioned simulators have to offer. Also, the high quality graphics will keep you engaged with this app.

Various planes and airport environments are available. By default, only one airplane is available, but a good collection of airplanes is available, which can be unlocked by paying some fees. As you proceed through the levels, you will get more challenging situations.

You can either practice landing in the one time simulation mode, or carry out simulations in Career mode.

I loved Extreme Landings as an airplane simulator. The visuals, realistic simulation using cockpit tools, and realistic physics that has been used in this app, make it a simulator that every airplane enthusiast must try. 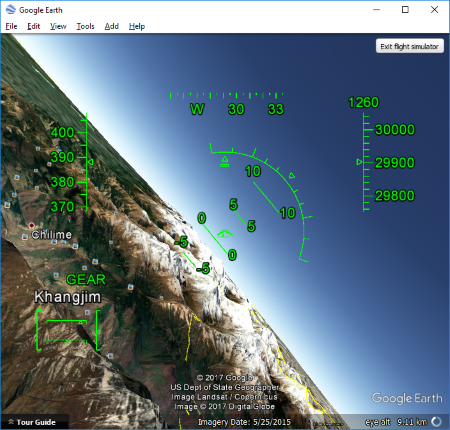 We all know what Google Earth is and how amazing it is. Unfortunately, Google has officially stopped supporting downloadable version of Google Earth and it is available as an online utility now; however, it can be downloaded from other software hosting websites.

Not everyone knows that Google Earth comes with an inbuilt Flight Simulator. Although the flight simulator gives you the first person view of flight from the cockpit, the simulation is very realistic; thanks to Google Earth’s satellite imagery of Earth. So, you can fly anywhere on Earth using this free flight simulator.

Two aircrafts are available here, an F-16 jet fighter and a SR22 propeller airplane. You can begin a flight simulation from your current geo-location or from any of the listed airports. When you start simulation from current location, the plane will already be in a flight. Selecting an airport for flight lets you initiate a take off to get into a flight.

The controls are easy. You can use your mouse and keyboard to control the flight simulation. If you have a joystick, that will work too. While taking off, use the Page Up and Page Down keys to increase and decrease thrust respectively. When the plane reaches enough speed to take off, press the down arrow key for a lift. You can also use your mouse and drag it around to control airplane movement. Not many advanced options are available, but it is indeed one of the best flight simulator game available out there. 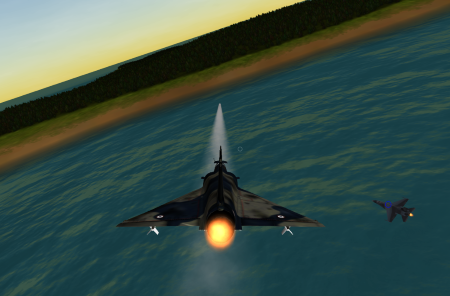 Fighter Pilot is an open source combat flight simulator for Windows and Linux. Here, you have to go through multiple levels, where your task is to eliminate enemy targets. This flight simulator is fun to play, as it lets you control flight and shoot air borne and grounded enemies. Modern fighter planes, good graphics, combat simulation, and easy flight controls make this simulator worth having. Although you cannot take off or land, the closely realistic simulation fills the gap.

Once you begin simulation, the flight starts in mid air, with enemy planes flying around. You have to chase them, and when marked in red, you can take them out with missile or cannon. In further levels, you also get to eliminate grounded threats.

There are two simulation modes: single and multiplayer. In single player mode, you fly alone, while in multiplayer mode, 2 players can play in split screen mode. Players can choose to play together or against each other. 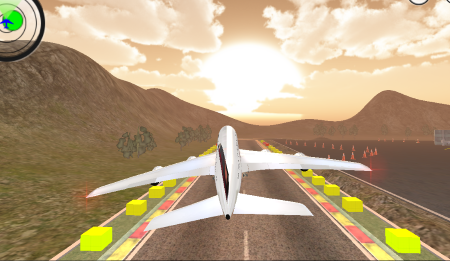 Airplane Flight Pilot Simulator is another free airplane simulator Windows 10 app. It is a simple, yet good flight simulator software for Windows. It lets you take off a plane and then land it at another airport. The controls are simple and hassle free, with no complicated options. The only downside of this simulator is that there are not many airplane, airport, or simulator modes, making it monotonous.

You can use WASD keys and your mouse to control the plane. 2 view options are available, which you can toggle according to your preference, using the Enter key.

A kid mode is available, where you can fly plane without crashing it. No matter where you land it, plane will not crash. 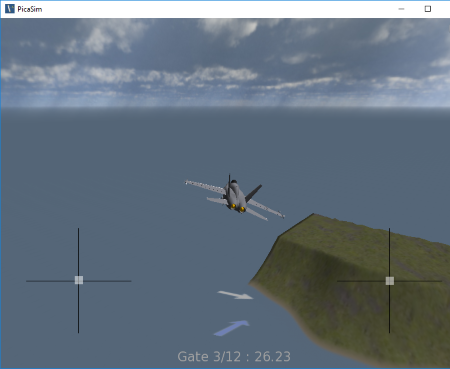 PicaSim is a free flight simulator game for RC aircraft. It lets you simulate flight of gliders and other radio controller aircraft on your PC. It is also available on Android and iOS devices. There are many selection options for Planes and Scenery to simulate flights available in this game. You can even create your own plane, redesign a plane, or modify Skyscape according to your choice.

To control flight, you can either use mouse or joystick with keyboard. The main ways to control flight are mouse and joystick; the keyboard can only be used to pause, relaunch, and change flight views. To control flight via mouse, two control grids are available on screen. It might be difficult in the beginning, but once you get used to it, controlling flight becomes easy. Here’s a video that will help you understand how to fly planes in this free flight simulator game for PC.

There are two airplane simulator modes available, Free-Fly and Race. In both modes, you can choose default, or select your own plane and scenery for simulation. Once you start a flight simulation, you can view wind direction, wind speed, flight duration, and other information on screen.

One of the good things about this free fight simulator is that it is lightweight and runs smoothly even on PCs with moderate graphic configuration. Also, you can play it on your Android device. 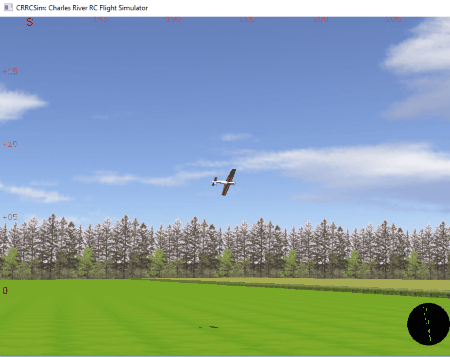 CRRCSim is a free and open source flight simulator software for PC. Its another simulator for gliders and RC planes that you can look into for realistic flight simulation. It is multi platform and can be run on Windows, Mac, and Linux. Although there are limited locations for simulation, you will find a good list of planes, including a helicopter and a drone.

If you have a joystick, then flying a plane would be easy, but you can use your mouse as well to control flight of planes. The scroll key of mouse can be used to increase/decrease thrust, and mouse movements control the flight direction. Of course it takes time for getting used to control flight, but it is very easy.

CRRCSim is another lightweight flight simulation software which runs pretty smoothly on computers with average configuration. 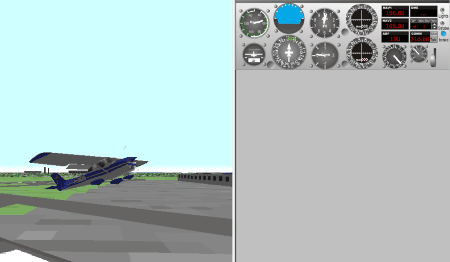 Leo’s Flight Simulator is another airplane simulator available for free. It has a good collection of airplanes, ranging from commercial aircraft to fighter planes. You can simulate flight at any of the three locations available. A simulation can be recorded and played as well. The instrument cluster displayed on the interface resembles the instruments available inside an airplane cockpit.

Flight can be controlled with the help of keyboard or joystick. Although keyboard controls are a bit odd and leave you confused, you can always configure keys according to your choice. It is suggested to play this flight simulation game with the help of joystick.

Talking about the simulation, it is realistic, but the graphics part is a bit disappointing. Even on highest graphic setting, the simulation seems pretty average.

You can change simulation conditions, such as day time, weather, wind, terrain, etc. Also, you can view simulation in 3 different views.