Here is a list of Best Free GPU Benchmark Test Software for Windows. Using these free software, you can perform GPU speed test in order to determine and analyze graphics card performance. The GPU benchmark test basically evaluates your video card’s capabilities and how well it is performing. It can be used by video gamers to check whether their graphics card is suitable for heavy duty games. Or, you can use these software generally to compare the GPU benchmark test results with other results and analyze your graphics card’s performance.

These GPU benchmark test software perform a series of tests which help in determining GPU performance. These tests include game performance test, geometry processing speed, pixel shading, etc. You can also save the results in a supported format in most of these software. Additionally, some of these software can help you determine system information including hardware, operating system, memory, storage device, etc. All in all, these are good system performance evaluation software which also include GPU benchmark test.

PC Wizard is one of my favorite software for GPU benchmark test. It is a dedicated computer benchmarking software which can be used to view system information and run a lot of benchmark tests.

D3D RightMark is another good software to run a GPU benchmark test. It has a simple GUI, so you wouldn’t face any difficulty while using it.

You may also like some best free Benchmarking Software, Graphics Card Identifier Software, and System Performance Monitoring Software for Windows. 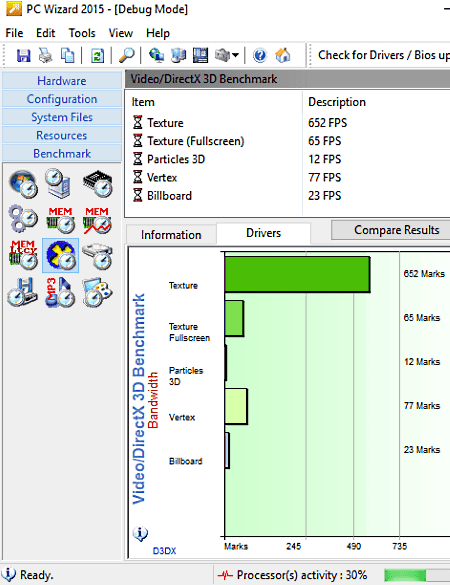 PC Wizard is basically a computer benchmark test software which includes GPU benchmark test too. Using it, you can evaluate system performance with the help of a lot of benchmarking tests.

To perform a GPU benchmark test, go to the Benchmark > Video/DirectX3D Benchmark option from the left panel. It will perform the test and as the test is finished, you will be able to view GPU benchmark test results on its interface. The test results include frame rate for texture, particles 3D, vertex, billboard, and others’ components. Plus, it displays a Chart (in Drivers section) which displays the same FPS. It also provides an option to compare your results with benchmark results for the same configurations.

It is a feature-rich benchmarking software using which you can determine GPU speed and perform many other PC benchmark tests. 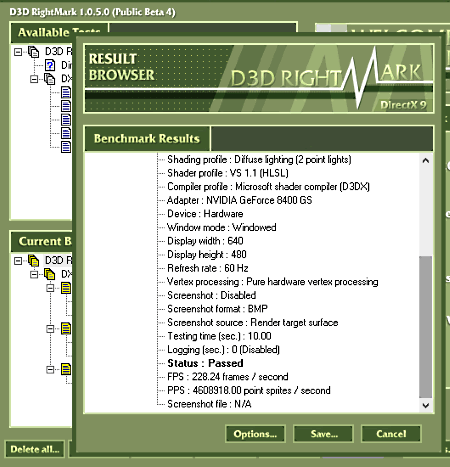 D3D RightMark is a free GPU benchmark test software for Windows. Using it, you can easily evaluate performance of your Direct3D graphics cards. To do so, it performs multiple tests which include geometry processing speed, hidden surface removal, pixel filling, pixel shading, and point sprites.

When the tests are done, it displays a Benchmark Results window from where you can save the GPU performance report in HTML or XLS format. In the report, you can view details like Refresh rate, Vertex processing, FPS, PPS, etc.

It is a great software to run a GPU benchmark test. It has a nice and clean GUI which makes the task quite easy. 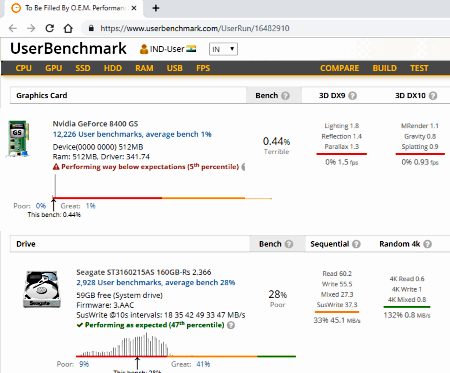 UserBenchmark is the next free GPU benchmark test software for Windows. It is a dedicated software which is used to perform various benchmark tests on your PC including CPU test, GPU test, Drive test, RAM test, etc. It can identify your graphics card, show details, and perform a test on GPU speed.

This software is different than other software in terms of working. It has no GUI and it actually generates a detailed report on GPU, CPU, Drives, RAM, Processors, and other system components. The report is generated when you install this software. After installation, it creates a GPU speed test as well as other PC components’ speed test report and displays it in your default web browser. To check GPU speed report, go to the Graphics section of the generated report. You can use your browser’s Print feature to save the report as PDF or to directly print it.

You can run its application file whenever you need to perform GPU speed test.

It is a great software to test GPU speed and for general system performance test. As it generates a comprehensive report, you can easily analyze and compare your graphics card’s performance. 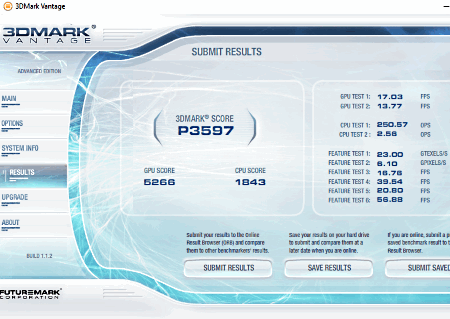 This software contains two GPU tests; Jane Nash and Calico. Both the tests have their own sets of feature tests and techniques to evaluate GPU speed (read its guide to know more). You can select either one of them or both tests to evaluate GPU performance. After doing so, hit the Run Benchmark button, sit back, and let it perform the test. The test takes some time to finish, so you need to be patient. Also, during the test, you can’t perform any other activity on your system. As the test finishes, you get the Results in its dedicated section. The test results basically contain graphics test performance in frames per second (FPS).

All in all, it is a decent GPU benchmark test software. It is more suitable for previous versions of Windows than the newer ones. 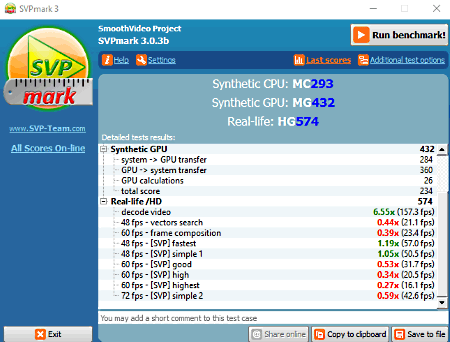 SVPMark is yet another GPU benchmark test software for Windows. It performs a series of tests to evaluate graphics card performance. It uses real-time frame interpolation algorithms from SmoothVideo Project for GPU speed test.

It is very easy to perform GPU benchmarking test using this software. First, go to Additional test options to customize a few test specifications like test (SD video, HD video, Full HD video, etc.), number of threads, GPU acceleration, etc. After that, click on the Run benchmark button and it will perform different tests to determine GPU performance. As the test is finished, it shows results on its interface including speeds for parameters like decode video, vectors search, frame composition, fastest, good high, etc.

SVPMark is a simple yet effective GPU benchmark test software which you can use without much hassle.