Here is a list of best free gravity simulator software for Windows. These software help to simulate the effect of gravity among different objects. Using these, you can visualize the impact of gravity between sun and earth, earth and moon, earth and ISS, or any two objects with different masses. Also, some of these even let you analyze the motion of n-objects under influence of the gravitational force of each other.

Some of these gravity simulators come with some built-in files. You just need to open these files and start gravity simulation. You can edit these files, or create a new one to make your own objects for simulation. Also, many of these let you create objects and simulate them under one another’s gravitational force. During the creation of objects, you can assign ID, name, position, velocity, weight/mass, density, etc. to them. In some of these software, you can visualize them in a set frame of reference with axis, trails, etc. on the screen. Also, some of these software provide information about position (x, y, z direction), velocity (Vx, Vy, and Vz), etc. of moving objects.

Gravity is my favorite gravity simulation software. It lets you create several objects and study them under each other’s gravity. Also, it denotes normal force vector and velocity vector lines with each object. Thus, you can see effect of forces in a better way. Moreover, you can save/open simulations in XML file. 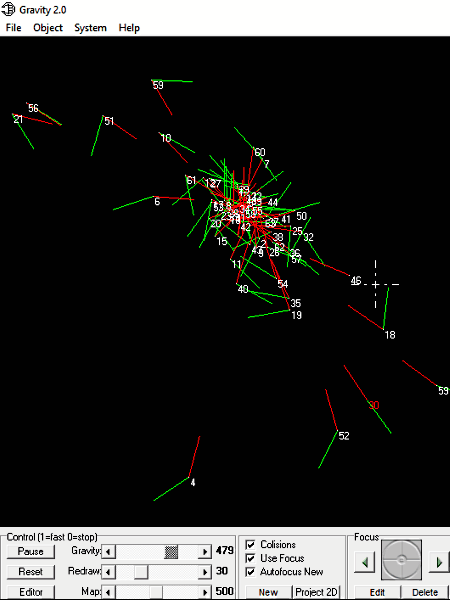 Gravity is a free, open source gravity simulator software for Windows. In this software, you get options to create several space objects and simulate their relative motion under influence of the gravitational force of each other.

To create an object, you need to go to Object menu and select New Object option. Now, you can enter object ID, its weight, positions, and force vectors for the new object. You can also use Create Random Object option to visualize random objects under the motion of each other’s gravity.

It provides a gravity scale to adjust gravity up to 500, and Redraw and Map scales to adjust screen redrawing and speed of map redrawing, respectively.

In order to provide better visualization of gravitational forces, it even provides visual representation of velocity and force vectors for each space object. Also, you can set any object as focus object that lets you analyze simulation as per focus object.

Moreover, you can save the simulation as XML file and also open files with the same format. 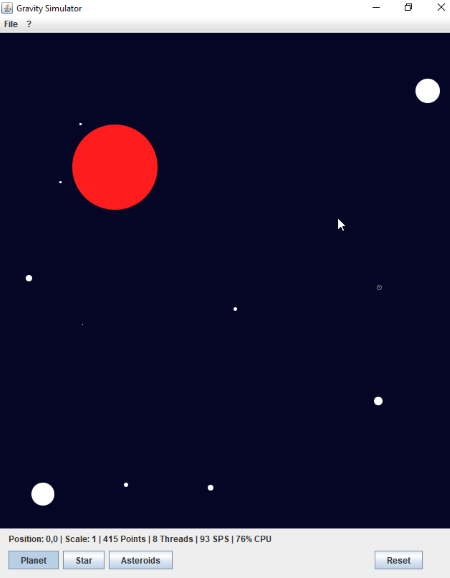 Gravity Simulator is a java based free gravity simulator software for Windows. Using this simple N-point simulation software, you can analyze motion and effect of gravity on Planets, Stars, and Asteroids on each other.

As you launch this software, you get a black screen that is analogous to the Universe. It lets you add Planets, Stars, and Asteroids with variable sizes; and the corresponding change in the path of space elements reflects on the screen as they pass through the gravitational field of each other. It provides visual representation of collision among asteroids, planets, and stars due to the force of attraction caused by their gravitational field.

It lets you save simulation files in GDS format and also allows the same to be loaded. 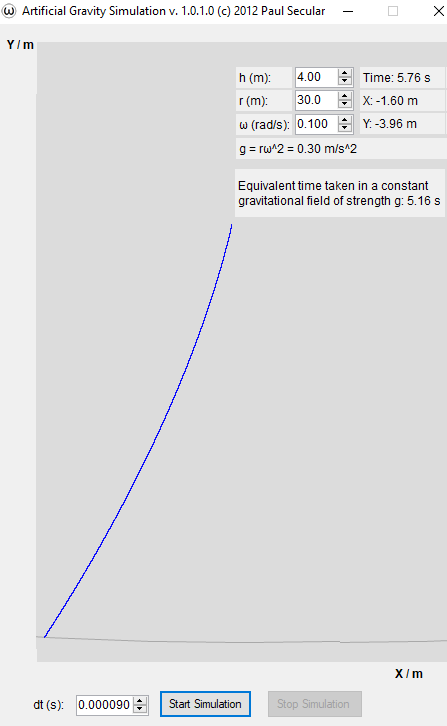 Artificial Gravity Simulation is another free gravity simulator software for Windows. This software is intended to give a visual representation of a force-free mass observed from a rotating frame of reference, that causes artificial gravity. To do so, there are certain assumptions made:

There are certain parameters you can change to analyze the effect of artificial gravity on the falling point mass. Some of these parameters are:

h: height from which Apple is falling (in m).
r: radius of rotating space station (in m).
Omega: speed of rotation (in rad/s).
dt: time increment (in seconds).

After setting values for these options, you can click on Start Simulation option to visualize the effect of artificial gravity on the falling point mass. 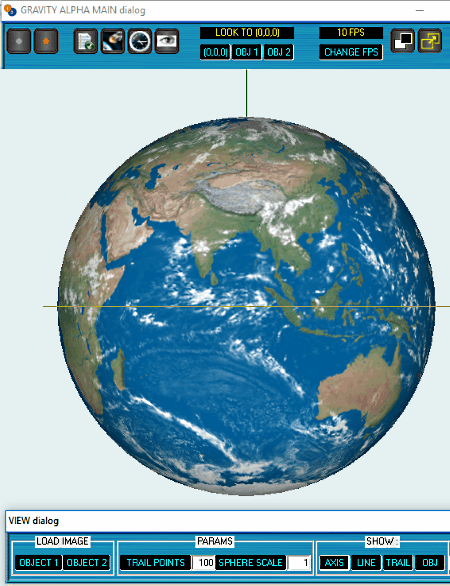 Gravity Alpha is another free gravity simulation software for Windows. Using this software, you can have simulation of gravitational force working between two bodies. These bodies may be sun and earth, earth and moon, earth and ISS, any two objects with different masses, etc. It comes with some preloaded TXT files. These files contain information about two bodies, such as object name, position in three dimensions, velocity (Vx, Vy, and Vz), mass, density, etc. You can either choose any of these files to start simulation, or edit/create new TXT file to simulate effect of gravitation on objects created by you. You can even add BMP images to created objects. Now, a click on green Start button starts simulation process.

For visualization of behavior of objects under gravitational effect, you can set a reference axis, line joining objects to the center of the reference, show trails, etc. Also, you can change scaling of objects in order to get better view. All these things can be done from View dialog.

From the Data Dialog, you can have information about position (in x,y,z directions), velocity (Vx, Vy, and Vz) of objects, mass, density, etc. To calculate/predict position and velocity of objects, as per the website, it uses numerical methods of solving differential equations. 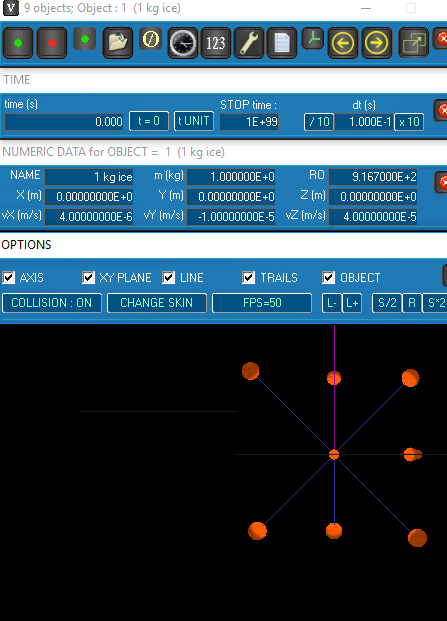 Gravity Nu is another free gravity simulation software for PC. It can be used to simulate effect of gravitation among N number of objects. It also comes with some TXT files which you can load to get visualization of object behavior under influence of each other’s gravity. Also, you can edit these TXT files or create new TXT files on the basis of available files to simulate your own objects. You can specify value for G constant, position (in three dimensions i.e. X, Y, Z), velocity in X, Y, and Z-directions, mass, density, and many other parameters for objects by creating or editing text files.

After loading any TXT file, you can track position of object in three dimensional (x,y,z- directions) space, velocity (Vx, Vy, Vz), mass, density, etc. There are several viewing related options available on its interface using which, you can enable or disable object, trails, line, axis, etc. to appear on the screen. Also, it lets you analyze simulation at various frame rates 1 FPS, 2 FPS, 5 FPS, 10 FPS,2 FPS, and 50 FPS. 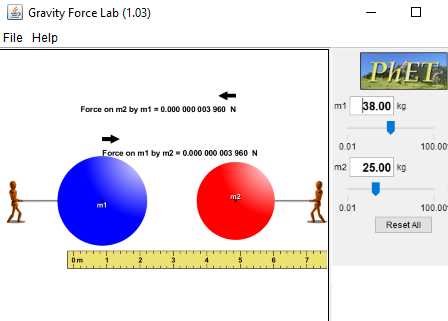 Gravity Force Lab is yet another free gravity simulation software for Windows. This software is based on Newton’s law of universal gravitation.

The software is very easy to use and contains two bodies having masses m1 and m2, respectively. There is a slider given on its interface to change mass in a range from 0.01 Kg to 100 Kg. Also, you can alter distance between bodies (maximum 10 meters). As you adjust mass of bodies and change distance between them, you can analyze amount of force exerted by a body to the body next to it. Thus, it lets you analyze the force (in N) applied by m1 on m2, and vice versa.

Therefore, it is one of the easiest software to understand Newton’s law of universal gravitation.