Here is a list of Best Free OBJ to GLTF Converter Software for Windows. OBJ (developed by Wavefront technologies) and GLTF (Graphics Library Transmission Format) are both 3D file formats that are used to store 3D models and scenes. In case, you need to convert a 3D model from OBJ to GLTF, you can checkout this list which contains all those free converters that support OBJ to GLTF conversion. Additionally, in these, you can convert OBJ and other models to many more 3D files formats, e.g., 3DS, PLY, DAE, WRL, STL, FBX, etc.

These are primarily 3D modeling software that provide you a great number of 3D designing tools. Some of these tools including insert 3D shapes, mesh design tools, extrude, shell extrude, bevel, mirror, dissolve, texture editing features, material editor, move, rotate, scale, and more. You can use these features if you want to make any modifications to input OBJ model before converting it to GLTF. Plus, a lot of 3D viewing options such as pan, zoom, orthographic view, perspective view, rotate, and more are also provided. So, you can view and analyze OBJ, GLTF, and other 3D models in these.

My Favorite Free OBJ to GLTF Converter Software for Windows:

Wings 3D is my favorite software as it lets you modify the OBJ model prior to conversion to GLTF. It is also very easy to use which makes it suitable for both novice and professional users.

You may also like some best free OBJ to PLY Converter, OBJ To STL Converter, and FBX to OBJ Converter for Windows. 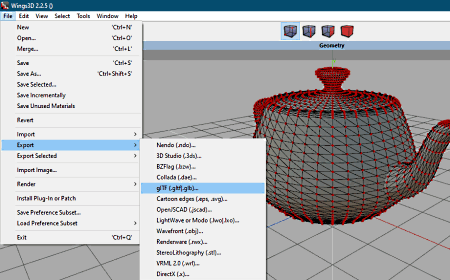 Wings 3D is a free open source OBJ to GLTF converter software for Windows, Mac, and Linux. It is mainly a 3D model designing software that lets you view, create, edit, and convert 3D models. OBJ, GLTF, 3DS, PLY, DAE, and WRL are some of the supported input and output formats in it. So, you can easily open an OBJ model and convert it to GLTF format. It also allows you to edit the input model before conversion. For that, you get a lot of 3D modeling tools such as move, rotate, scale, extrude, material editor, shell extrude, bevel, mirror, dissolve, tweak, etc.

Let us have a look at the steps required to perform OBJ to GLTF conversion.

How to convert OBJ to GLTF in Wings 3D:

It is a simple yet effective 3D designing software that comes with an additional conversion feature that enables you to convert OBJ to GLTF, PLY, 3DS, and many more formats. 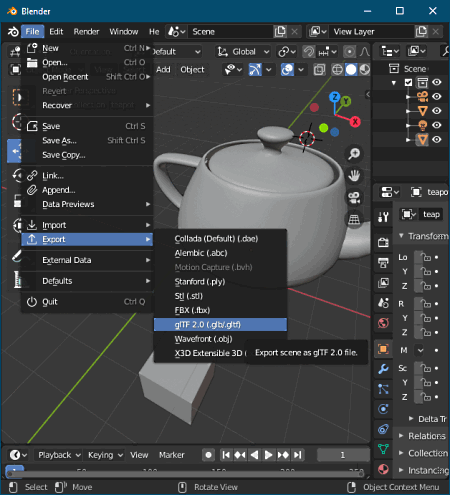 Blender is another free open source OBJ to GLTF converter software for Windows. It is a powerful 3D modeling and animation suite that also lets you convert 3D models. It supports both OBJ and GLTF file formats as input and output, respectively. Hence, you can import an OBJ model and then use its export option to convert it to another format including GLTF. It supports various other formats to convert OBJ model, such as DAE, 3DS, FBX, PLY, etc.

Apart from converting a 3D model, you can also make modifications to it. SI provides several modeling tools to edit OBJ model prior to conversion. Some of the tools include multiple transformation options, variety of mesh creation tools, a lot of animation features, etc. Now, you can check below to know the exact steps of conversion.

How to convert OBJ to GLTF in Blender:

It is great 3D animation modeling suite which also lets you convert an OBJ file to GLTF and some other formats. 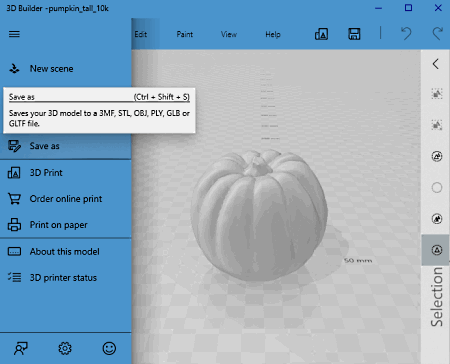 3D Builder is a free 3D modeling app for Windows 10 which can also be used to convert OBJ to GLTF. It is a nice and handy app that allows you to create some standard 3D models. In it, you can also view and edit existing various 3D models such as OBJ, STL, PLY, 3DS, etc. To perform 3D model conversion, you can use it save as feature. Let’s find out what are the steps needed to change the format of OBJ to GLTF.

How to convert OBJ to GLTF in 3D Builder:

It is a very simple 3D modeling app with essential designing tools along with a conversion feature that lets you convert OBJ to GLTF. 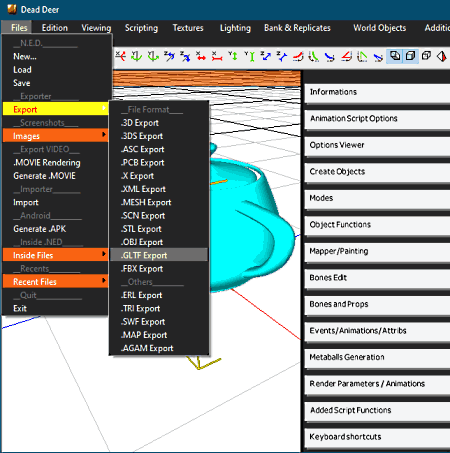 Dead Deer is one more free OBJ to GLTF converter software for Windows, Mac, and Linux. It is an advanced 3D model and game maker software that has an option to convert OBJ to GLTF. It comes with a lot of tools related to 3D viewing, object creation, scripting, texture editing, lighting, animation, and more. You can also modify OBJ model before converting it to GLTF or any other format. Besides GLTF, it lets you convert OBJ to 3DS, FBX, STL, and some more formats.

How to convert OBJ to GLTF in Dead Deer:

It is a powerful 3D modeling and game making software which can also be used for conversion of 3D models including OBJ to GLTF.