Most of these software can also record a video by using the screen feed. Plus, in some software, you can also capture both screen and webcam feed at the same time. Before recording the video, you can easily adjust various output video parameters like Video Resolution, FPS, Aspect Ratio, Codec, etc. After adjusting video parameters, you can start the video recording. In each software, you get different output video formats in which you can save the recorded videos such as MP4, AVI, MPEG, FLV, etc. A few open source video recording software also let you stream video on streaming platforms like Twitch, YouTube Live, etc.

Besides recording the video, these software can also take snapshots of any part of the screen. Plus, some additional features like drawing features, transition effects, video GIF maker, etc., can also be found in these software. In general, all of these are quite featured yet easy to use. To further simplify video recording task, I have also included video recording steps. Go through the list to find your favorite software.

OBS Studio is my favorite software because it can record videos using multiple webcam and screen feeds. It also gives you options to record only webcam feed, screen feed, or just audio. Plus, you can also add transition effects using it. 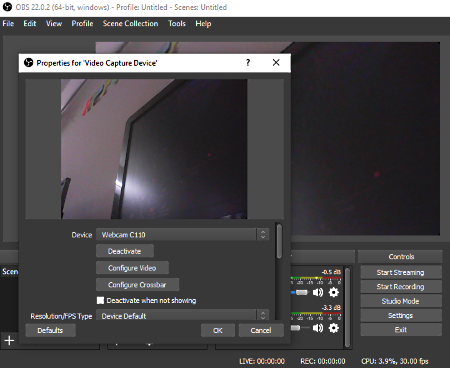 OBS Studio is a free open source video recording software for Windows. With the use of this software, you can record both webcam feed and screen feed at the same time. You can also choose to only record webcam feed, audio, or screen feed. The main advantage of this software is its ability to live stream video on platforms like Mixer, Twitch, etc.

After the successful video recording, go to its File Menu and select the Show Recording option to view all your recorded videos. Along with Video, you can also adjust video parameters and if needed, you can completely disable audio from the recording. It also comes with a handy Scene Transition Section through which you can add transition effects and transition effect duration in the video.

In general, it is one of the best free open source video recording software. 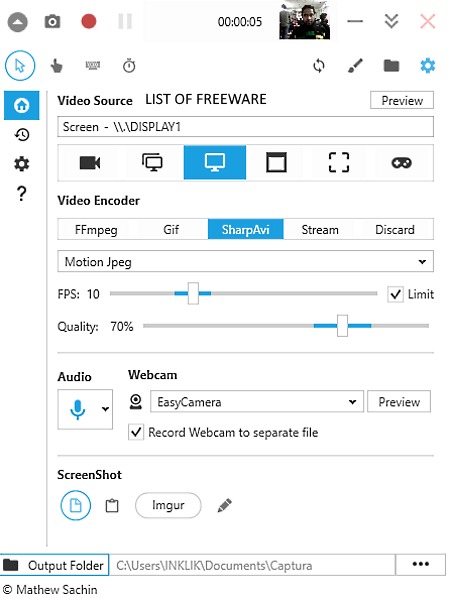 Captura is another free open source video recording software for Windows. Through this software, you can easily record the whole screen, webcam feed, and audio. Plus, options to separately record webcam feed and screen are also available in it. In this software, you get five webcam and screen recording options and one audio recording option namely Full Screen, Screen, Window, Region, Desktop Publication, and Only Audio.

Let’s take a look at all video recording options:

Before recording the video, you can also tweak some video parameters from its interface like FPS, Quality, Video Resolution, etc. To record video with proper audio, use its SharpAvi Option that saves the recorded video in AVI format. A GIF recording option is also available in it. Through this software, you can also stream video on streaming services including Twitch and Youtube Live. Some other additional features which you get in it are highlight cursor, hide cursor, screenshot capturer, etc. 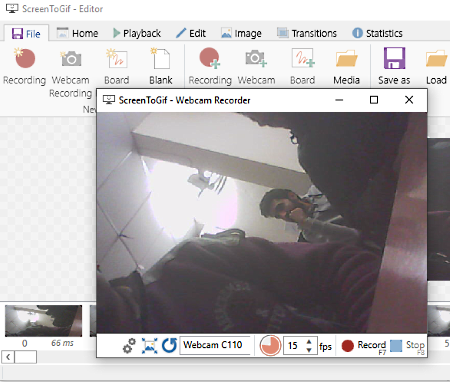 ScreenToGif is yet another free open source video recording software for Windows. As its name implies, it is mainly used to convert the recorded screen feed to GIF file format. However, it also lets you record webcam feed with ease. In it, you mainly get three recording sections namely Recorder, Webcam, and Board.

After recording the video using any of these three available recording features, an inbuilt Editor Window will automatically open up. Its Editor window provides various options through which you can easily edit individual frames of the video, add transition effects, insert image, preview video, change resolution, add delay to video, etc. All the editing features present in its editor are quite simple and easy to operate. After making the desired changes in the recorded video, you can use the save as option that allows you to save the recording in AVI, GIF, APNG, PSD, etc. formats. However, this software does not record the audio which is the main limitation of this software.

VLC Media Player is a free and popular media player software that you can also use as an open source video recording software. In it, you get a simple video capture feature through which you can record webcam feed with proper audio. It also provides a lot of video settings and modification options that you can use to tweak various output video and audio parameters.

How to record the video using VLC Media Player:

By default, this software saves the recorded video in AVI format. To save the recorded video in other video formats like MP3, FLV, WebM, MPEG, ASF, WMV, etc., go to Media > Convert/Save Menu and open the Capture Device Section. In this section, you get another convert/save option that opens up the Convert Menu. From this menu, click on Edit Selected Device Menu and select the desired output video format. Besides video formats, you can also modify video codec, audio codec, subtitle, etc. properties from this menu.

Overall, it is another good software to record webcam feed. 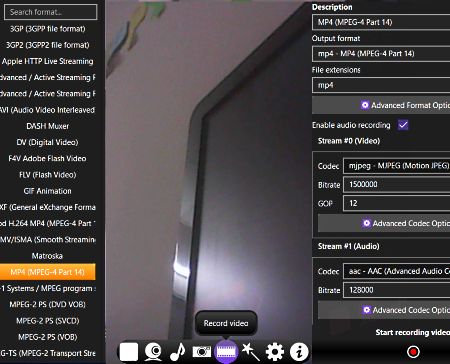 Webcamoid is the next free open source video recording software for Windows. Through this software, you can easily record webcam feed as well as screen feed. However, at a time, you will only be able to record either webcam feed or screen feed. To switch between feeds, use its Configure Sources Menu. After selecting one of the feeds, go to Record Video Menu to configure various video configuration options that you can tweak such as Video Format, Video Resolution, FPS, Video Format, Codec, Audio Codec, Bitrate, etc. On the right side panel of the Record Video menu, you get a lot of video formats that you can select for the output recording such as 3GP, DV, MPEG, MP4, PSP MP4, etc.

This software also comes with various video effects like ASCII Art, Aging, Blur,  Cartoon, Cinema, Edge Detection, Distort, and more. You can access video effects from the Configure Effects menu. After adding effects and configuring video parameters, you can start the video recording by pressing the Record Button. Besides recording the video, you can also take snapshots of both screen and webcam feed through this software.

In general, it is a simple and straightforward software through which you can easily record a video using the webcam or screen feed at a time.