Use of these graphing software is pretty easy as you just need to enter a Quadratic equation to get the resultant graph. Not just one graph, but multiple graphs can also be generated by entering multiple equations in most software. In case of multiple graphs, these software allow you to assign different color schemes for different graphs to create a distinction between graphs. After completion, you can save the graph in a software specific project format or as a PDF.

Some equation graphers can also give you solutions of various mathematical problems like Trigonometry, Linear equations, Quadratic equations, etc. Plus, various common but essential tools like Zoom in/out, Pan, Graph lines, etc. are available in most software.

Microsoft Mathematics is my favorite software because it can plot both 2D and 3D graphs of a Quadratic equation. It is also capable of plotting multiple graphs of different equations like Trigonometry, Cubic, etc. Plus, its property to provide step by step solution of various mathematical problems is also impressive.

You can also check out lists of best free Math Equation Editor, System Of Linear Equation Calculator, and Fibonacci Calculator software for Windows. 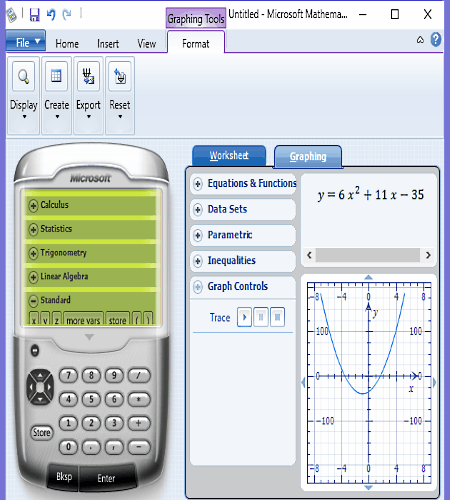 Microsoft Mathematics is a free quadratic equation grapher software for Windows. It is basically used to draw and solve graphs of various mathematical problems like Linear equations, Calculus, Trigonometry, Statistics, etc. It is also capable of drawing both 2D and 3D graphs of any equation. Also, its capability to give step by step solutions of input equations is really impressive.

How to graph a quadratic equation in Microsoft Mathematics:

On the main interface of this quadratic grapher, you can view two main sections namely, Worksheet and Graphing. In its Graphing section, you can enter one or more quadratic equations to get the output graphs of all equations. Usually, the graph of quadratic equations have the parabolic shapes that you can also notice on this software. To analyze plotted points over the graph, use the Worksheet section which contains the exact values of both X and Y coordinates. Now, to view the 3D graph, again go to Graphing section and change the dimension from 2D to 3D. Always remember to press the Graph button to view the output graph. In the 3D graph, you can change the orientation of the graph through your mouse. Plus, in both 2D and 3D graphs, you can use the mouse wheel to zoom in and zoom out.

After completion, you can save the step by steps results along with graphs as Microsoft Mathematics Worksheet (.gcw) format. It lets you print the graph as well. 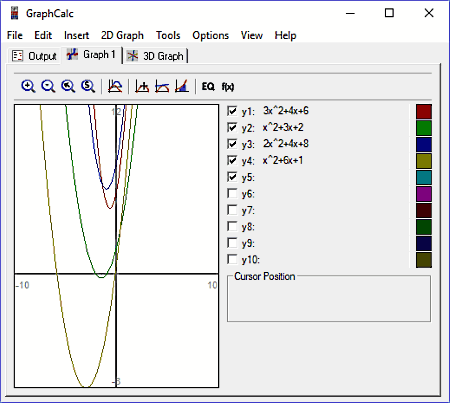 GraphCalc is a free and feature-rich quadratic equation grapher software for Windows. Using it, you can draw both 2D and 3D graphs of Quadratic, Linear, Cubic, Trigonometric, etc. equations. Not just graphs, but the complete solution of equations can also be obtained through it.

This software comes with a dedicated graph section where both 2D and 3D graphs are available. To draw a 2D graph, select the Graph 1 tab from the main interface. In this tab, 10 y(t) functions from y(1) to y(10) are present on the right side of the interface. Fill one or more y(t) functions with the quadratic or other supported equations to immediately get the graphs of respective equations on the XY-plane. Each y(t) function is coded with a different color, so you can quickly identify the graph of a specific equation. At any time, you can change the color of a function from the Graph options. The output graphs do not have any markings, still, you can use point cursor at any point of the graph to view its coordinates.

Similar to 2D graphs, you can easily draw 3D graphs as well by using the 3D graph tab. In this tab, you can enter the quadratic and other equations by accessing the 3D Graph menu > Options. At maximum, you can get the graphs of 6 different equations. Some other settings like the selection of colors, range, and axes can also be changed. After the setup, press OK button to view the 3D graphs. You can easily rotate and pan the graph through mouse to view it from all angles.

The resultant 2D and 3D graphs of the Quadratic equation can be saved as PDF file format. 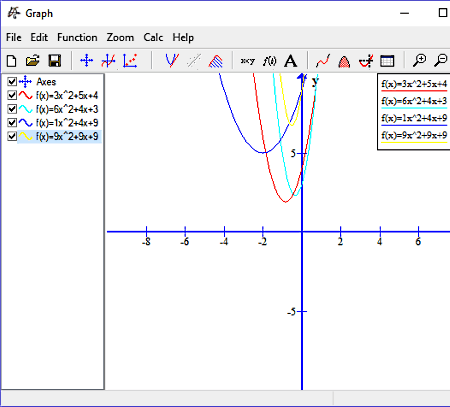 Graph is a free and open source Quadratic equation grapher software for Windows. It can also be used to draw graphs of various other mathematical functions or equations like Linear equations, Trigonometric functions, Cubic equations, and more.

In this software, you can draw multiple graphs on the same XY-plane by entering more than one Quadratic equations. Not just one type of equation, but two or more absolutely different equations like Linear, Trigonometric, and Quadratic equations on the same XY plane can also be drawn. And, you don’t need to select different equation types before entering the equations because it can self-identify the differences between equations by analyzing their structure. In case of multiple equations, you can assign a color scheme for each equation to quickly identify a particular graph. Besides color coding, there are some other handy features in it like Shading (to shade different parts of the graph), Series (to add colored dot on the graph), Label (to add text), Relation (to add relations between equations), etc.

Now, to plot graphs for Quadratic equations, go to Functions menu and select Insert function. In Insert Function, there is one Function equation field where you need to enter one equation at a time. Color coding option is also available in this menu, so select a color for the entered equation and click on OK button to view the graph on XY plane. Repeat the same process again to plot multiple graphs by entering more equations. After completion, you can save the final graph in various formats like SVG, BMP, JPG, PNG, etc. 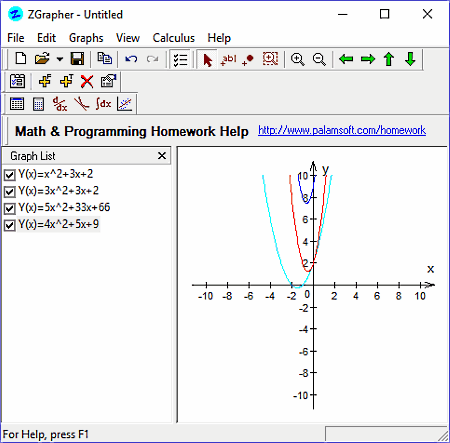 ZGrapher is a feature-rich graph generating utility software for Windows. Through it, you can generate graphs for various mathematical problems like Quadratic equations, Linear equations, Derivation, Integration, Regression, Tangents, and more. Like other similar software, you need to enter the Quadratic equation to this software to get the output graph. The graph plotted by this software is very well marked. Still, you get some additional tools to add labels and points to the graph as well.

This freeware also lets you plot multiple graphs on its XY-plane by entering multiple Quadratic equations. Plus, you can use different colors to differentiate each graph from each other from its Graph properties.

How to plot a graph using ZGrapher:

After completion, you can save the graph as an Image (BMP, GIF, and PCX) or as ZGrapher (.zgd) file. 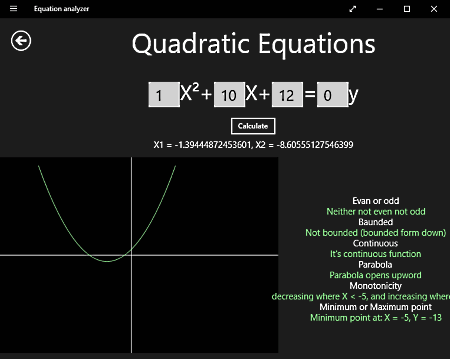 When you launch this app, you can view only two main options namely, Linear Equations and Quadratic Equations. To plot a graph of a Quadratic equation, select the Quadratic Equation option and enter the equation. After that, press Calculate to view the resultant graph. Besides graph, it also clearly defines the meaning of graph by showing various graph parameters.

Graph Parameters provided by this software are:

Similar to the Quadratic equation, you can plot the graph of linear equation by going to Linear equations option. 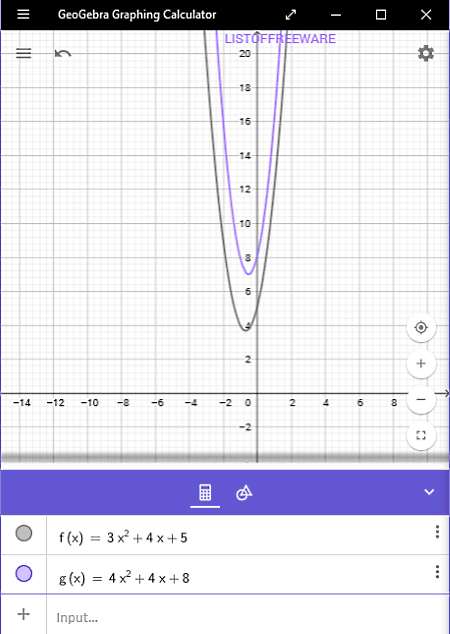 GeoGebra graphing Calculator is another free quadratic equation grapher app for Windows 10. This app can plot graphs using Quadratic, Linear, Trigonometric, and various other mathematical equations. Plus, it also allows you to enter multiple equations to plot their graphs on the same XY-Plane. To create a difference between graphs, this app automatically selects a different color for each graph.

The process of generating the graph is simple as you just need to enter equations in its Algebra section to get the respective graph. The unique property of this app is that it shows the graph in real time. That means as soon as you enter a single digit of the equation, it starts plotting the graph from that instance.

This app also comes with a lot of tools that you can use to further add various elements on the graph. Some of the useful tools of this software are:

After completion, you can save the graph as a project and also share it with others through Email and Onedrive. 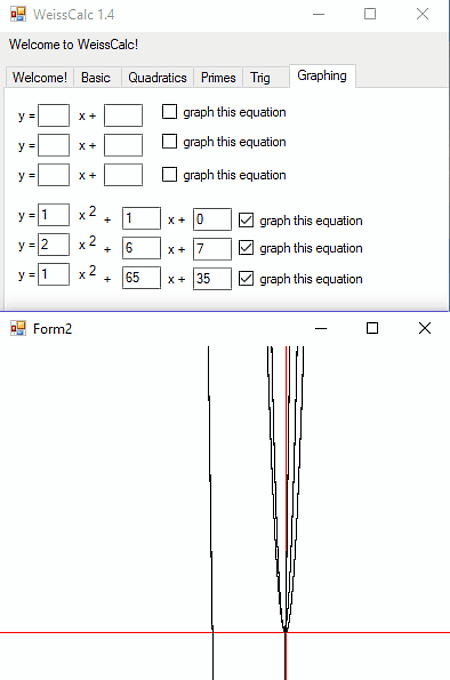 Apart from graphs, you can also use this freeware as a basic calculator, quadratic equation solver, prime number checker, and Trigonometry function solver. 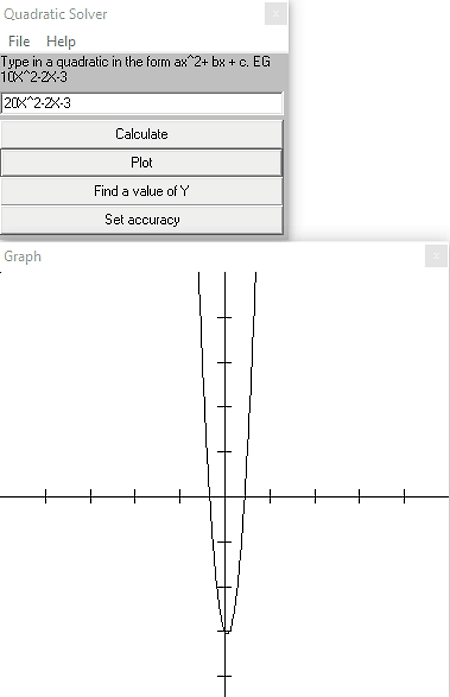 Quadratic Solver is another lightweight quadratic equation grapher software for Windows. It is a straightforward software that plots a graph according to the input quadric equation. Not just graph, it can also be used to get the solution of the equation as well as to find the value of Y by entering the value of X in the same equation.

To plot a graph, first, you need to enter a Quadratic equation to this software. After that, press the Plot button to view the graph. In the output graph, you can notice that it does not have any markings on both axes which is the main drawback of this software. Overall, it is a simple and easy software to get the quadratic equation graph. 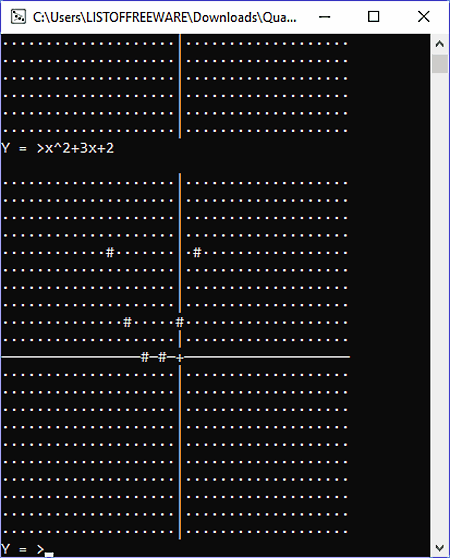 Console Grapher is a free and portable console-based Quadratic equation grapher software for Windows. It is a very lightweight software that you can carry around in a portable storage device and use on the go.

This software is capable of plotting graphs of various equation types like Quadratic, Linear, Cubic, Trigonometric equations, etc. When you launch this software, a console window will open up where you can enter one equation at a time. After writing the equation press Enter to view the resultant graph. In the output graph, you can notice that it contains very few points (#) to represent the shape of the graph, usually parabola in case of Quadratic Equations. Plus, the lack of markings is another letdown of this software. Through its output graph, you can get a hint of the overall shape of the graph but nothing more.

Overall, it a quite simple but also a very basic Quadratic grapher software with almost no additional features.