In this run down, you will also find a software which solves the linear equations and present the solution in step by step method and speaks out each step. This provides you a better understanding of each step.

If you are searching for a linear equation calculator which can plot a graph, then such type of software is also added to the list.

I’ll go with Universal Algebra Solver. It is the only calculator in this list which provides a step by step solution to the entered problem. In addition, it speaks out each step. Moreover, you can use it to solve for both x and y.

You may also like some of the best free Geometry Calculator, Unit Converters, and Scientific Calculators for Windows. 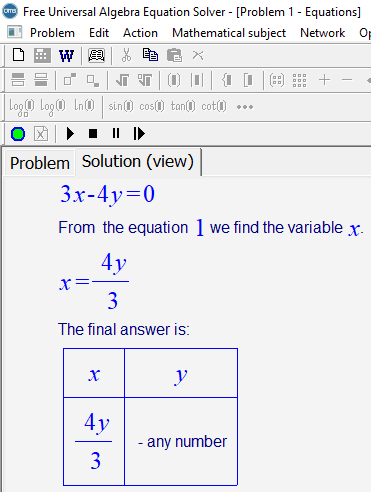 Universal Algebra Solver is the only linear equations calculator in this list which shows a step by step solution with simulation of the entered algebraic problem. With the help of this advanced calculator, you can learn how to solve a math problem, as it speaks out each step, like Text to Speech software do. This feature of Universal Algebra Solver makes it stand out from the other calculators in this list.

In order to solve an equation, just type it in its original form, like AX + B = C (a linear equation with one variable) and press Enter button. You can also press the green button provided on its interface to solve an equation. If you enter a linear equation with more than one variable, it asks you the variable for which you want to solve the equation. For example, in the equation 3x + 4y – 6z = 0, it asks you to solve for x, y, or z. You can select any of these or all of these options.

It also provides you a feature to save the solution in PDF format.

It is available in both free and paid versions. Its free version lets you solve only the algebraic equations. For more advanced features, like Simplification, Trigonometry, Intermediate Graphs, Complex Numbers, Inequalities, Differentiation, etc., you have to purchase its full version. 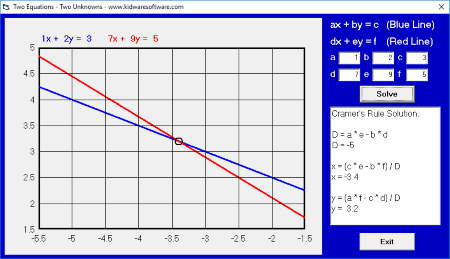 The two linear equations displayed on the interface follows the format: ax + by = c and dx + ey = f. Here, a, b, c, d, e, and f are the constant terms of linear equations with two variables. To solve for x and y, you have to enter the value of these constants in the provided space. When you are done, click Solve button and you will get your solution immediately.

The best part of this free calculator is that it plots an X vs Y graph with two different colors for every entered problem. 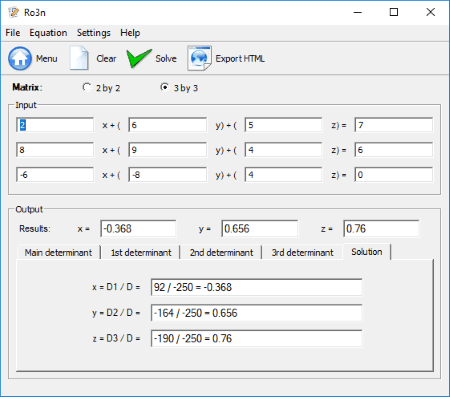 It uses matrix method to solve the system of linear equations. Along with the separate values of x, y, and z, it also displays main determinant, 1st determinant, 2nd determinant, and 3rd determinant of the matrix thus obtained.

Calculatormatik is another system of linear equation calculator.

Calculatormatik is an advanced calculator in this list. It comes with lots of built-in calculators which you need in your daily studies. Other than calculators, you will also find several unit converters in it. Below, I have listed the names of some of these calculators and unit-converters: 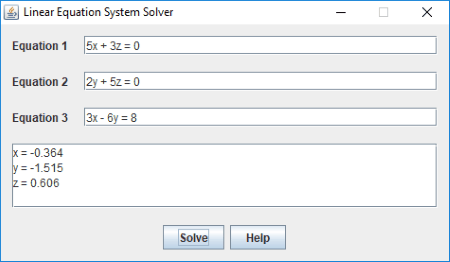 Linear Equation System Solver is another free system of linear equation calculator. It lets you compute the linear equations with three variables. It is a JAVA based program, which needs JAVA to run on a PC.

You need not install this software on your PC, as it is a portable software. Just click its executable file and hit Enter button. 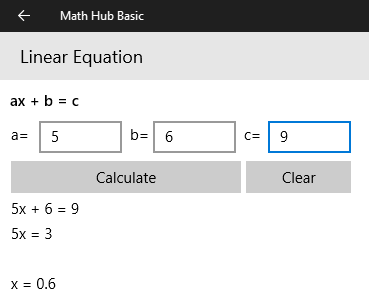 Math Hub Basic is a free Windows 10 app to solve linear equations with one variable. Hence, you can only solve for X using this freeware. 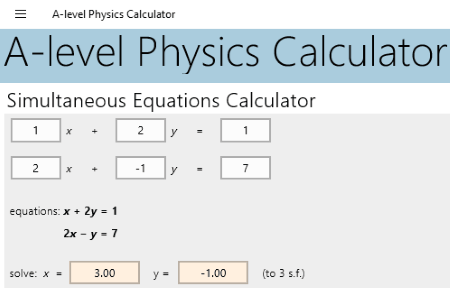 A-Level Physics Calculator is a very good physics calculator, which is intended to do some algebraic calculations.

Mathematic Tools is another free Linear Equation Calculator app for Windows 10. This is a very simple app, which lets you calculate only the linear equation with one variable. In other words, you can only solve for x using this software.

In order to get the solution of a linear equation with one variable, you just have to enter the values of its coefficients.

The only disadvantage that I found in this calculator is that it is not designed to solve linear equations with more than one variable. Moreover, in the expression ax + b = c, constant c is fixed to zero, which further restricts its usage for solving linear equation.