This article contains a list of best free ray tracing software for Windows. Ray tracing is a technique used to generate an image by tracing the path of light as pixels in an image plane and simulating the effects with virtual objects. All the listed software use ray tracing algorithms to create a lifelike rendered 3D scenes or object images. Ray tracing helps these software to develop some challenging areas like reflection, shadows, light source, etc. In most software, ray tracing works on the background and automatically applies to images when rendered.

Using these freeware are not that easy as you need to have some prior knowledge about the software and programming languages used to create a 3D scene. However, some software provide samples of 3D models and tools to easily create a final image or model. After rendering, you can save the output as images or 3D model formats like D3D, 3DS, PNG, BMP, JPEG, etc.

DIALux is my favorite software because using it, you can make professional 3D models with realistic reflection and light scenarios. It also has a good set of tools and predefined models which makes building 3D scene little easier. Plus, the ability of this software to automatically use ray tracing algorithms over the 3D models is also impressive.

You can also check out lists of best free Molecular Modeling, Structural Engineering, 3D Rendering, and CAD software for Windows. 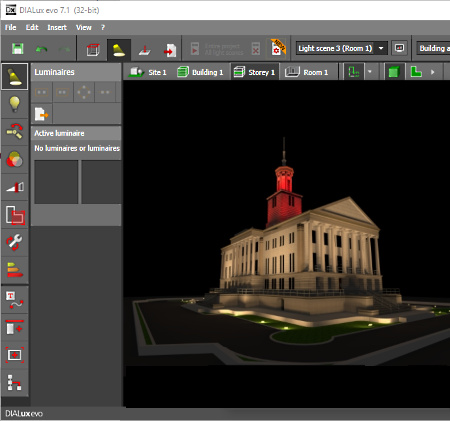 DIALux is a completely free ray tracing software for Windows. It is mainly a lighting design software that also incorporates ray tracing to create light and shadow effects. Using it, you can create professional level 3D buildings, rooms, street light models, etc., which can be used as a blueprint for an actual construction. You can also use CAD data or Models of other architectural programs to this software and add lighting effect to it.

This freeware provides three tool sections to construct well-lit 3D models namely Construction, Light, and Calculation objects. Before using these tools sections, first select a scene that you want to build from the toolbar, namely, Building and Outdoor planning, Simple planning, and Street Light. According to the selected scene, the set of tools of the tool sections will also vary.

Let us take a look at the tools sections and how they work:

After making the model, you can preview the final result using Results Overview option. This result can also be saved as a DIALux Evo project file or as an Image (JPEG, PNG, and BMP). 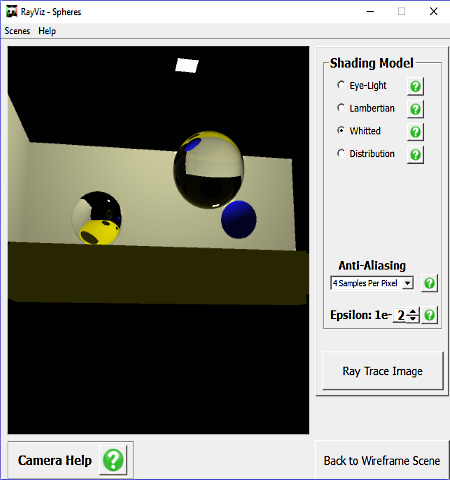 RayViz is a free ray tracing software for Windows. This software is used to teach students about ray tracing and how it works by showing them live ray tracing examples. In it, you can easily create ray traced image and also understand how different ray traced algorithms or models affect the final image. Plus, this software also helps you view the path of rays that goes from the light source to eyes to understand the scene clearly.

Let’s see how these shading models work and how they affect the scene:

Now, to produce a Ray Traced Image, first, choose a model, a scene, an anti-aliasing value, and then press the Ray Trace Image Button to view the final image. By clicking on the final image, you can also view all types of rays (shadow ray, reflection rays, etc.) along with the ray path on the interface.

Overall, it is a really good software to teach students fundamentals of ray tracing. Still, it has disadvantages that you can neither save the ray-traced scene nor import any scene other than three inbuilt ones. 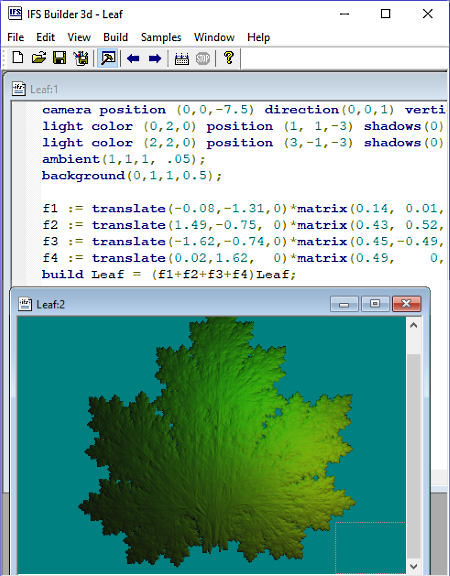 IFS Builder 3d is another free ray tracing software for Windows. It is also used for building 3D images and stereo pictures (pair of images, looking through which, you can see one three-dimensional object) and animations of fractals including motion, zooming, and morphing.

In this software, you can build 2D and 3D models as well as view and edit models of some specific formats, namely, ifs and ifsb. In order to build a model, you need to have prior knowledge of the structure of text code. Although, the code structure is not that hard as it contains coordinates of parameters like camera position, shadows, light color, ambient, etc. After completion, you can run the code using the build menu. As this software comes with inbuilt Ray-tracing algorithms with support for light sources, shadows, and mirrors, you don’t have to manually select the algorithms. In the final result, you can notice that resultant models are very realistic looking.

Apart from making a model, you can also use various predefined sample models which can also be modified and saved as Fractal Document (ifsb) format. 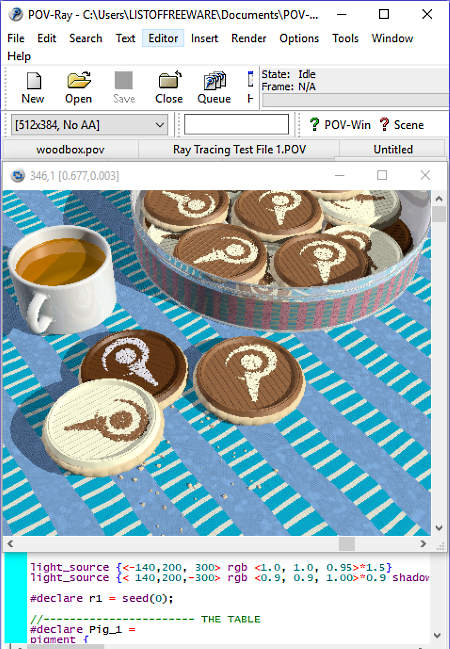 POV- RAY is a free and open source ray tracing software for Windows. It is also known as Persistence of Vision Ray Tracer, and it is used to generate images from text-based scene description. Using it, you can generate a scene or object of a very high quality with real looking shadows and light details. You can also use it to edit and run local files of some selected formats named POV, INI, and TXT.

In order to create or edit a scene, you must be familiar with text code used in this software. Even a single mistake in the code results in an error or no output. To reduce your effort, various predefined codes of Scenes, Shapes, Animation, Patterns, Camera Perspective, Color, Light source, etc. are provided in the Insert menu. After writing the code, you need to run or render the code by pressing the Run button. After rendering, a small window containing the rendered scene will open up. The final rendered scene can’t be shared with others, but you can share the code behind it in formats like POV, INC, INI, TXT, etc.

Apart from designing 3D objects and scenes, you can also test your PC performance using its CPU benchmarking features. These benchmarks help you find both the single and multi-threaded performances of your CPU. 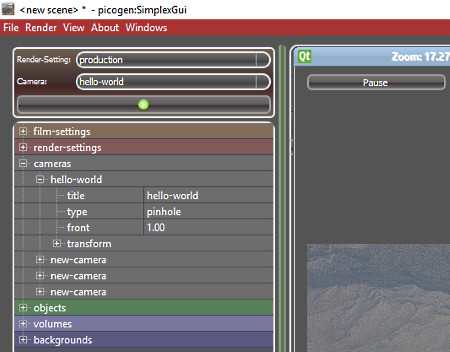 Picogen is a free software to create and render artificial terrain by using ray tracing technique. The primary purpose of this software is to display realistic 3D terrain in terms of terrain formation and image plausibility. 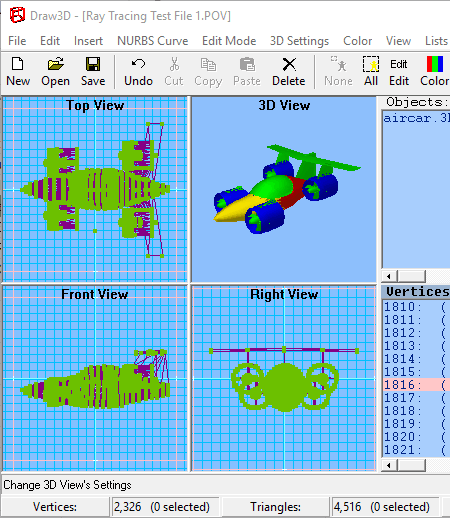 Draw 3D is another free ray tracing software for Windows. It is mainly used to create and edit 3D models, but it also uses ray tracing in order to give a real-life look to the 3D objects. Ray tracing algorithms work in the background and automatically apply to objects when the object is exported in POV-ray tracing format. It also means that you will not be able to select ray tracing algorithm by yourself.

In this freeware, you can create a completely new model or edit 3D model files of various formats like POV, D3D, 3DS, ASC, etc. To create a 3D model, this software provides some handy tools (zoom, move, rotate, etc.) and various predefined shapes (cube, cylinder, sphere, etc.) to quickly make a 3D object. Top, Front, Right, and 3D view along with coordinates of all vertices of the created object can be viewed on the main interface. You can start giving a realistic look to the object using 3D settings and Color settings (true color, high color, set 3D background color, etc.).