Here is a list of Best Free Slow Motion Video Editor For Windows. These are basically video editors which can be used to slow down a video and create a slow motion video. Each slow motion video maker follows different steps to reduce video speed. Some let you enter a decimal value, while some other let you specify a value in percentage to decrease the speed of a video. In one of these, you can reduce the frame rate of a video in order to make it a slow motion video.

After slowing down a video, you can export it in any of the supported videos formats. Most of these slow motion video software support video formats like MP4, FLV, AVI, MPEG, WMV, MKV, MOV, 3GP, etc.

In a similar manner, these free slow motion software can also be used as fast motion video editors. Also, due to being advanced video editors, you can edit individual videos or create a whole project using audio, video, and image files.

OpenShot Video Editor is my favorite slow motion video editing software as it can slow down a video in both backward and forward directions.

If you want a dedicated software to slow down a video, Free Speed Video is a good option. It can also create slow motion videos in a batch. 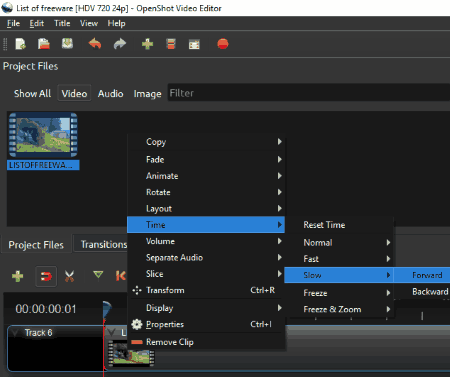 Slow down a video in OpenShot Video Editor:

As it is a feature-rich video editor, you can use it to create a whole project with audio, video, and images while using editing tools like effects, transformation, transitions, etc. 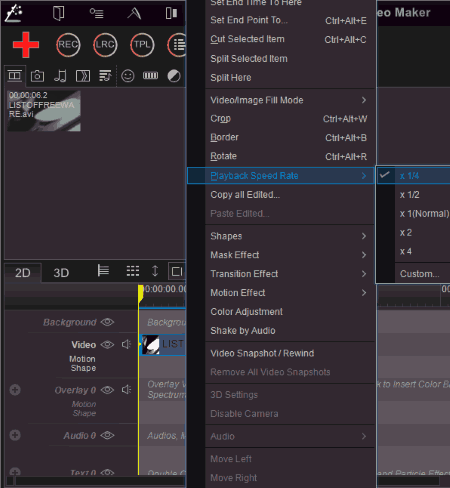 Easy Video Maker is a feature-rich video editor which can be used to slow down a video. You just have to follow few simple steps in order to convert a video into slow motion. Open a video file, drag it to the timeline, right-click on it, and click on Playback Speed Rate option. You can now either reduce video speed by 1/4 or 1/2 of the original speed or choose a custom value to slow it down. As simple as that.

To export the edited video, first, you can set the output parameters (video profile, size, frame rate, quality, output format, etc.) from Settings and then click on Render button.

Easy Video Maker is an extremely easy-to-use slow motion video editor. Apart from that, you can make a video project with media files, rotate a video, resize a video, split a video, crop a video, add motion effects, and do more. 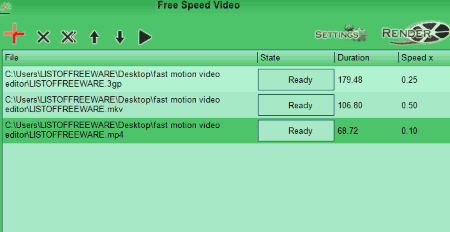 Free Speed Video is a dedicated software which is used to speed up or slow down a video. It is a straightforward slow motion video editor which even supports batch slow motion video editing. After importing the videos, enter the desired speed in decimal under the Speed field. To slow down a video by 10%, enter 0.9, or by 25%, enter 0.75, and so on. Similarly, you can also speed up videos by entering a value greater than 1.

There is a dedicated Preview button to see changes made to the speed of a video. Now, set up output parameters (format, bit rate, overlay quality) and click on Render button to save the video.

AVI, OGV, MP4, ASF, MKV, 3GP, FLV, and RM are some of the import formats supported by this video speed changer. As for exporting an edited video, apart from original video format, it supports MP4 and WMV formats only. 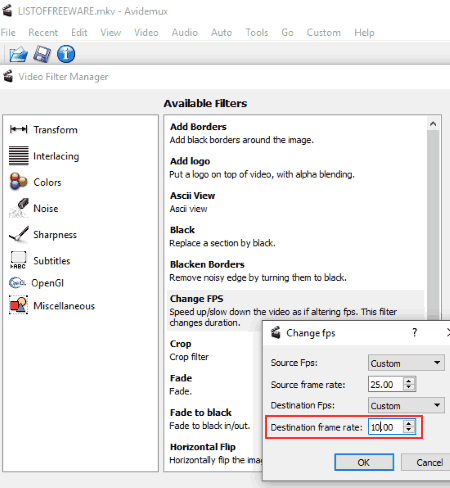 Avidemux is a simple slow motion video editor. Here are the steps required to change video speed and slow down a video:

Interlacing, Colors, Noise, Sharpness, Subtitles, OpenGL, and Miscellaneous are other editing menus you get in Avidemux. Using these menus, you can add filters/noise to a video, rotate/flip/resize videos, insert subtitles to a video, and more. 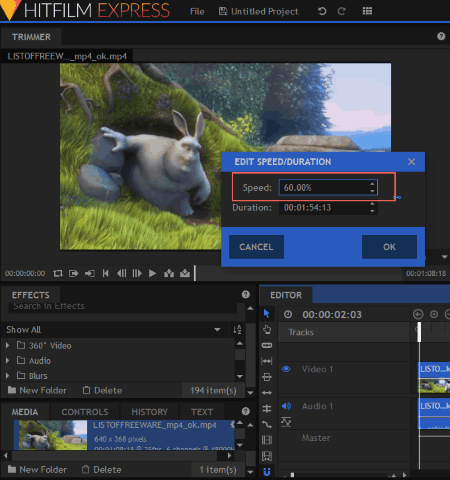 HitFilm Express is another popular video editing software which can be used to slow down a video.

How to slow down a video in HitFilm Express: 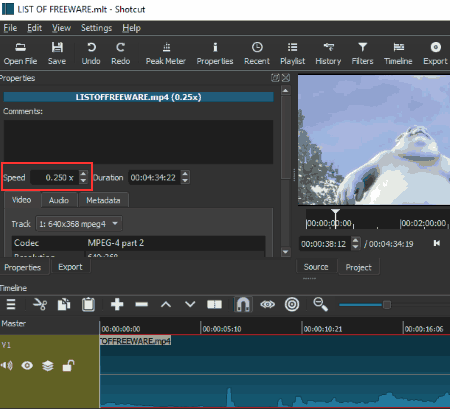 Shotcut is another advanced video editor which facilitates you with a speed changing tool.

How To Change Video Speed and Slow Down a Video in Shotcut:

It supports video formats including common ones (MP4, AVI, MPEG, WMV, MKV, etc.) as well as some device specific and other uncommon video formats.

Shotcut is a well known video editor. It provides many editing tools which you can checkout here > Shotcut. 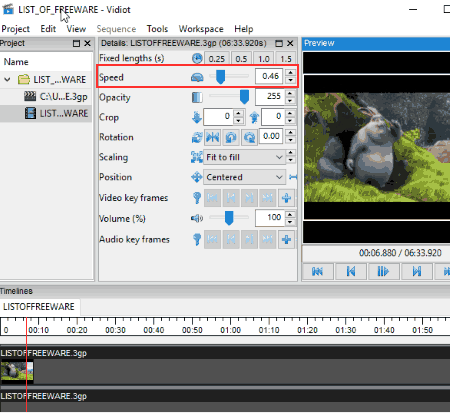 Vidiot is another free slow motion video maker software. It lets you open a video file in MP4, FLV, MOV, MPEG, OGG, AVI, MKV, F4v, M4V, etc. formats. After that, as you click on the video on its timeline, you will see various editing options including Speed. Just use the slider to reduce the speed of the video. Other editing options are opacity, crop, rotation, scaling, video key frames, etc. You can also watch the preview of the video with changed speed. 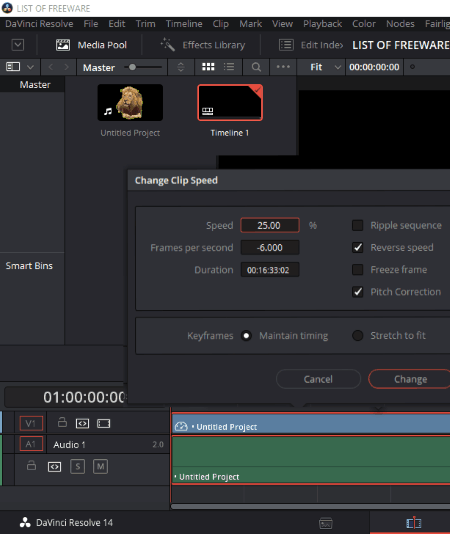 DaVinci Resolve is yet another slow motion video maker in this list. The process to slow down a video is very simple. Import a video and drag it to the timeline. After that, right-click on the video and click on Change Clip Speed option. Now, just enter the speed in percentage to make a slow motion video. Any value between 10 to 100 will slow down a video from its original speed. To export the video, move to Deliver tab. There, you can edit resolution, output profile, output format, etc. video parameters.

DaVinci Resolve is a good video editor. To know more about its editing tools, check here. 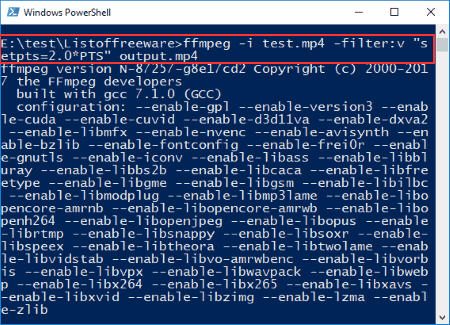 FFMPEG is a command based slow motion video editor software for Windows.

Slow down a video using a command:

Here is the simple command you need to use in order to slow down a video using FFMPEG:

In the above syntax, 2 is used to reduce the video speed by 2x. It doubled the video duration and thus, slowed down the video.