Here is a list of Best Free TGA to DDS Converter Software for Windows. These are the free software that you can use to convert Truevision Graphics Adapter (TGA) files to DirectDraw Surface format. While some of these support one file conversion at a time, many of these also let you batch convert TGA to DDS. Besides DDS, you can convert TGA to a wide number of graphics formats including PNG, JPG, BMP, TIFF, GIF, ICO, EPS, SVG, PSD, WEBP, and more.

Some of the listed converters are dedicated batch image converter which provide direct option to convert multiple TGA images to DDS. Other listed software are image editing software that provide “save as“/ “export” feature to convert TGA to DDS or any other supported format. In these converters, you can find useful image editing tools that help you modify TGA images prior to conversion. To name some, these offer editing tools including resize, rotate, flip, crop, watermarking, color adjustment, filters, and effects.

Additional tools can also be found in these free TGA to DDS converters, such as animation maker, image viewer, plugin support, and more. You can find more tools in these; keep on reading the article to know more.

My Favorite TGA to DDS Converter Software for Windows:

Converseen and XnConvert are my favorites as you can batch convert TGA to DDS using these freeware. Also, they support a variety of graphics file formats to convert images from one format to another.

I also like GIMP; it is a powerful image editor that lets you edit a TGA image and then convert it to DDS format.

You may also like some best free TGA to JPG Converter, TGA to PNG Converter, and TGA File Editor software for Windows. 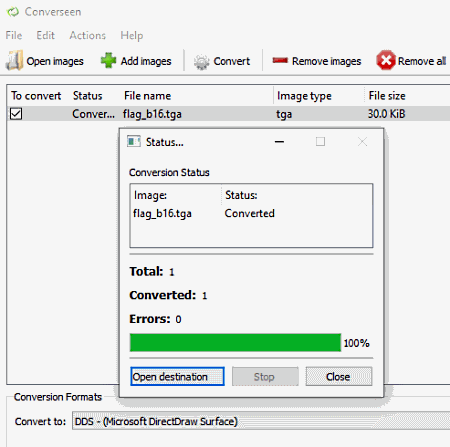 Converseen is a free bulk image converter that lets you convert TGA to DDS. It is a dedicated image converter that supports a wide number of formats to convert images in bulk. The supported image formats in it include PNG, JPG, PDF, SVG, EPS, PSD, EXR, GIF, DPX, TIFF, AI, ICO, RAS, and more. Apart from image conversion, it provides a few image editing options including Rotate & Flip, Scale Image, and Change Resolution.

How to batch convert TGA to DDS in Converseen:

It is a great bulk image converter to convert multiple TGA images to DDS format simultaneously. 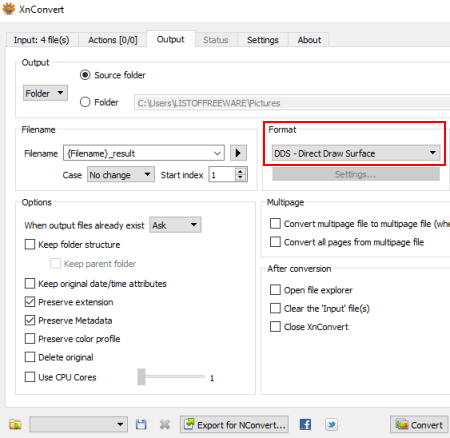 Another advantage of this software is that it supports a lot of input and output formats. So, you can perform various image conversions on different image file formats like PSD, PS, JPG, JXR, PNG, EMF, BMP, ICO, etc.

How to convert multiple TGA images to DDS format in XnConvert:

It comes with a handy feature called Hot Folders. It basically monitors specified folders and if new images are added to those folders, it converts them using last used settings.

It can be used for free only for non-commercial use.

If you want a quick TGA to DDS converter that can also edit source images, then go for this one. 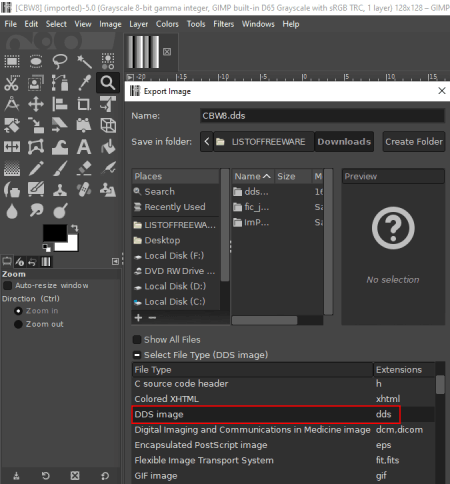 GIMP is a popular image editing software for Windows, Mac, and Linux. It can also be used as TGA to DDS converter as it supports both TGA and DDS as input and output formats, respectively. You can also edit TGA images prior to conversion as it contains a feature-rich set of image editing tools. Other than these two formats, it supports many more graphic file formats including PSD, WebP, JPG, PNG, BMP, TIFF, etc.

How to convert TGA to DDS in GIMP:

It is a great image manipulation software that lets you import, view, and edit TGA images and then convert it to DDS. 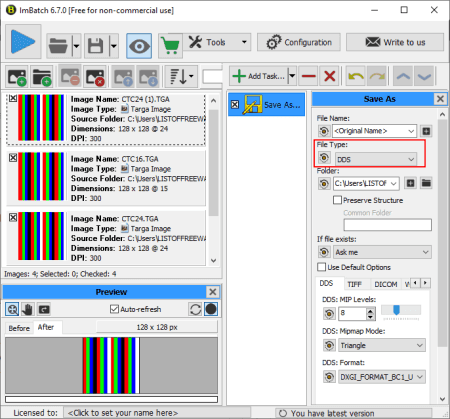 ImBatch is an image processing software that lets you convert TGA to DDS. Apart from TGA to DDS, it can be used for various other image conversions as it supports a good number of input and output formats. Some of these supported formats include GIF, SVG, JPG, PNG, BMP, PSD, TIFF, and more. It also supports raw image formats to process, such as DNG, CR2, SR2, NEF, ARW, ORF, etc.

How to batch convert TGA to DDS in ImBatch:

It is free for private use only. If you want to use it for business purposes, you need to purchase its license.

It is a nice handy software using which you cannot just convert one but multiple TGA images to DDS format at once. 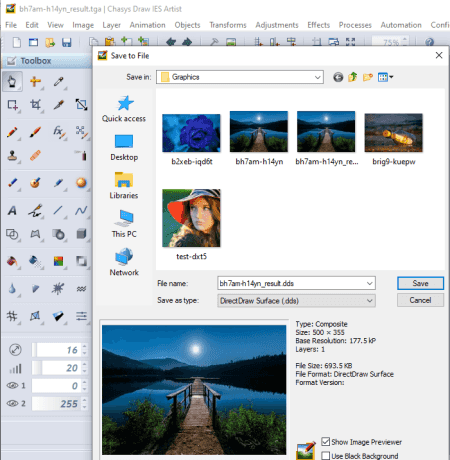 Chasys Draw IES Artist is another TGA to DDS converter software for Windows. It is a graphic design software that lets you create and edit graphics in various formats including TGA, JPG, PNG, GIF, BMP, PSD, etc. You can also convert an image format using its save as/ export feature.

How to convert TGA to DDS in Chasys Draw IES Artist:

It is a nice free graphic designing software that you can also use to convert image format including TGA to DDS. 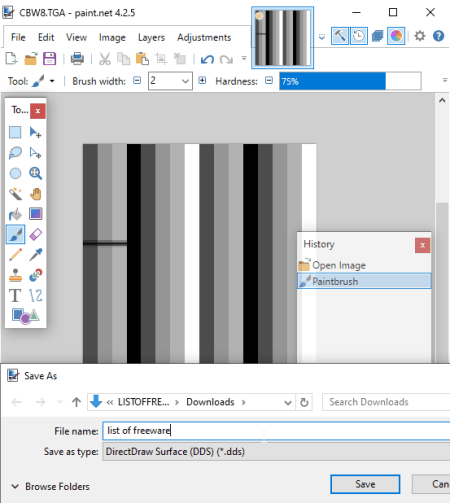 Paint.NET is one more handy image editing software that also lets you convert TGA to DDS. It comes with a good set of image editing and drawing tools, so you can edit TGA images as per your requirements before conversion. You can also convert to TGA to various other formats such as PNG, JPG, BMP, GIF, etc.

How to convert a TGA image to DDS format in Paint.NET:

If you’re a regular user of this simple yet effective photo editing software, it is a convenient alternative to convert a TGA image to DDS.