Here is a list of best free video aspect ratio changer software for Windows. Using these software, you can change aspect ratio of video according to displays of different standards. The term Aspect Ratio refers to the width of a video in relation to its height. There are many video standards which we use in the present time, such as like theaters use 1.85:1 and 2.39:1, Old TVs use 4:3, current TVs use 16:9, etc. In these software, you either get predefined aspect ratios or a manual option to set aspect ratio of videos. Some of the most common aspect ratios contained in these converters are 16:9, 4:3, 3:2, and 1.85:1. 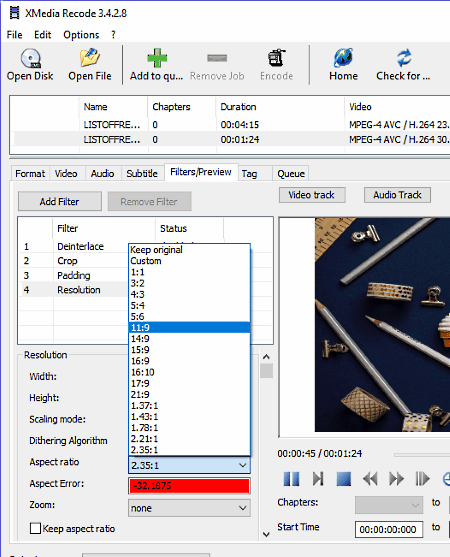 XMedia Recode is basically a video converter which can be used as a video aspect ratio changer. In this software, you can change aspect ratio of multiple videos at a time. To do that, add videos by pressing the Open File button. After that, go to Filter/Preview section and select the desired aspect ratio from Aspect ratio menu. This software contains a lot of aspect ratios (1:1, 4:3, 3:2, 5:4, 11:9, 14:9, 16:9, etc. ) to choose from, certainly more than other similar software. Plus, a Video Previewer is also available in this section in which you can view the change in aspect ratio of video in real time. From this menu, you can vary some other video parameters like Video resolution, Scaling, Padding, etc.

Using this freeware, you can convert a video to another format and extract audio from video. It also lets you edit a video by trimming a video clip, cropping, rotating, adding a subtitle file to a video, and more. It supports a good range of input and output formats of audio and video files, like Mp4, MP3, MP2, MKV, FLV, 3GP, MPEG, MOV, and many more. 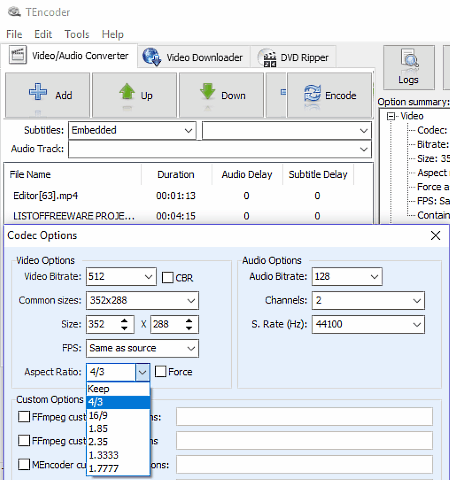 TEncoder is another free video aspect ratio changer software for Windows. Using it, you can change aspect ratio of video of virtually any format as it supports a lot of them such as FLV, M2V, AVI, MKV, MPEG, WMV, MP4, and more. Plus, batch aspect ratio conversion of multiple videos at a time can be performed in this freeware.

This software not only focuses on the conversion, but also ensures that conversion process takes as less time as possible. To decrease the conversion time, you can increase the number of process up to 16 and also enable use extra threads option from Settings to further speed up the conversion speed. Along with aspect ratio, you can modify many other parameters of a video like Encoder (Mencoder and FFmpeg), Formats (AVI, MP4, MKV, WEBM, etc), Video & Audio codecs, Video Resolution, FPS, etc.

In order to convert aspect ratio of one or more videos, first, add video(s) to this software using Add button. After that, select added videos from its interface and go to Video and Audio options menu. In the menu, you can view an Aspect Ratio menu from where you can select any of the available aspect ratios namely, 4:3, 16:9, 1.85, 2.35, 1.7777, and 1.3333. Similar to aspect ratio, you can modify many additional media parameters from the Audio and Video Options menu. At last, press the Encoder button to start the conversion. 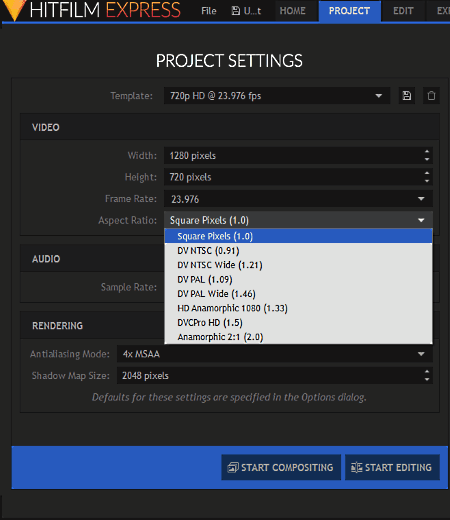 To change the aspect ratio, first, launch this software and create a New project from the File menu. As soon as you create a new project, a Project settings panel will open up that has an Aspect ratio menu along with other settings like Frame Rate, Width, Height, Sample Rate, Antialiasing mode, etc. From the aspect ratio menu, select one of the available aspect ratios namely Square Pixel (1.0), DTSC (0.9), DTSC Wide (1.21), DV PAL (1.09), DV PAL Wide (1.46), and Anamorphic (2:1). After the completion of project setup, press the Start Editing Button to open up the editing section. In this section, you can import a video, edit it, and enhance it using various available tools. Once done with editing, press the Export Contents icon and go to the Export Tab and click on the Start Rendering button to start the conversion.

Besides having various features, it is also good at handling videos of various formats like AVI, WMV, MPEG, MP4, MOV, etc. But to export, it supports only MP4, AVI, and Image Sequence file formats. 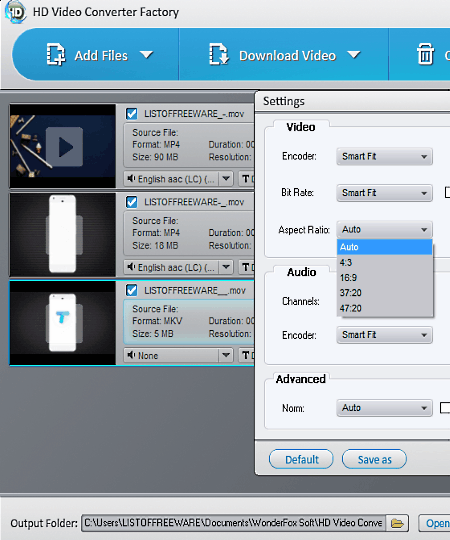 HD Video Converter Factory is yet another free video aspect ratio changer software for Windows. With the help of this software, you can convert aspect ratio, video format, video resolution, bitrate, encoder, etc. of videos of almost every format. Some of the supported input video formats are WEBM, AVI, MPV, VOB, WMV, DAT, FLV, etc. This converter also contains some quick editing features through which you can make changes to videos such as Effects (to add various color filters on videos), Video Trimmer (to trim out a trivial part of the video), Video Cropping (to remove the part of video usually edges from the visible part of video), etc. Plus, a Merge option is also available through which you can merge or join multiple videos into one.

The process of converting the aspect ratio is really simple, first, add one or more videos using the Add Files option. After that, go to the Settings menu and choose one of the 4 available aspect ratios namely 4:3, 16:9, 37:20, and 47:20 from Aspect ratio drop down menu. In settings, you get all the modifiable video parameters that you can change. After making all the necessary changes, press the RUN button to initiate the conversion process.

Note: In this free version, various features like batch video conversion, FHD & 4K resolution, etc. are locked. By purchasing the full version, you can remove all the limitations. 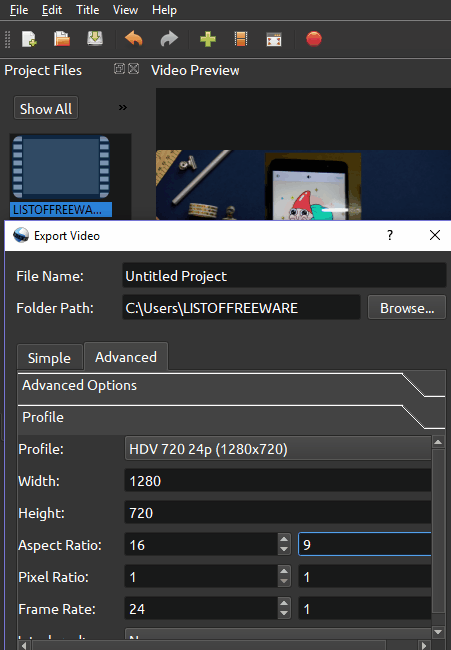 Openshot is another video editor which lets you vary the aspect ratio of a video. In this software, you can change the aspect ratio at the time of exporting the video. To do that, open the Export Video settings panel from the File menu. Now, go to the Advanced > Profile menu and manually set any aspect ratio you want. From the Advanced menu, you can modify various other video parameters as well such as video Quality, Resolution, Frame rate, Codec, Format, etc.

This free video aspect ratio converter supports a good range of input video formats, but you can export videos in formats like MP4, AVI, MOV, MPEG, OGG, FLV, and WebM, only. 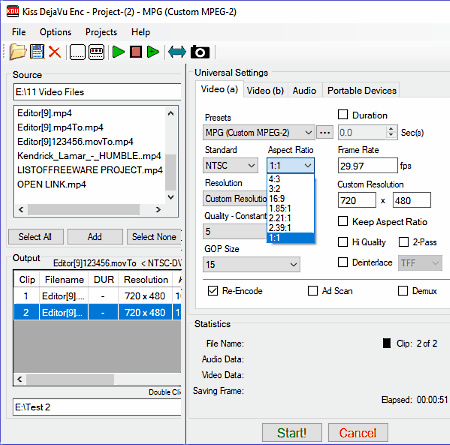 To convert video aspect ratio, browse a video folder from Source section and select one or more videos and press the ADD button. Add button will add selected videos to the output section. Now, go to the Universal Settings section and select Aspect ratio menu and choose any one of the available aspect ratios namely 4:3, 3:2, 16:9, 1.85:1, 2.21:1, 2.39:1, and 1:1. Some video parameter and editing features are also available in the Universal Settings section that you can modify. After making all the changes, press the Start Button to start the video aspect ratio conversion. 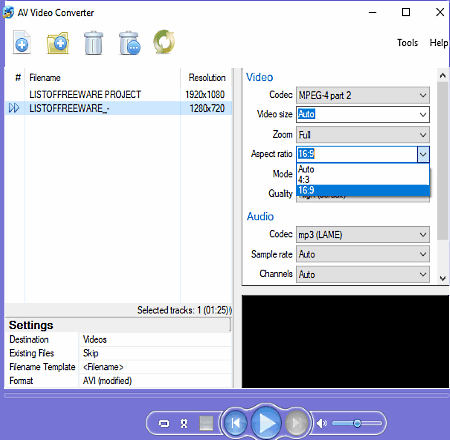 AV Video Converter is mainly a video converter software which can also be used to modify video aspect ratio. It provides only two standard aspect ratios to choose from namely 16:9 and 4:3. All the video settings along with aspect ratio option are present on the main interface. So, you don’t have to dig down menus to reach important options. Other video parameters that you can modify are Codec, Video Size, Zoom level, Quality, Audio Codecs, etc. Plus, it also lets you convert video to audio.

It supports all common video formats to import and resize. To export a video file, it supports formats like AVI, MPEG, MP4, OGV, MKV, WEBM, FLV, and WMV. A media player is also available in this software but during testing, it was not able to play any video.

Note: This video resizer is free only for non-commercial use. 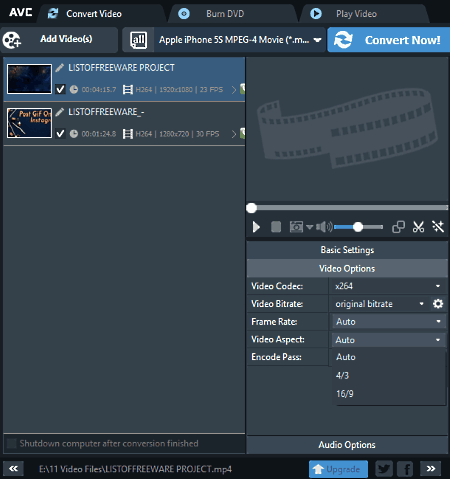 Any Video Converter is another free video aspect ratio converter software for Windows. Using this software, you can convert aspect ratio along with various other parameters of a video like Video Format, Resolution, Codec, etc. All video parameters along with the aspect ratio option are present in the Video Options menu, from where you can select either 4:3 or 16:9 aspect ratio. Apart from converting the aspect ratio, you can also convert videos of many popular formats into various device-specific formats like iPhone 5 MPEG-4,  Sony WMV-9, LG TV H264 (MP4), etc.

Through this software, you can also edit (cut and add effects to video), Download online videos, burn disk, and also play videos before and after the conversion. Overall, it is a feature-rich software, but the availability of only two aspect ratio is the only disadvantage of this software. 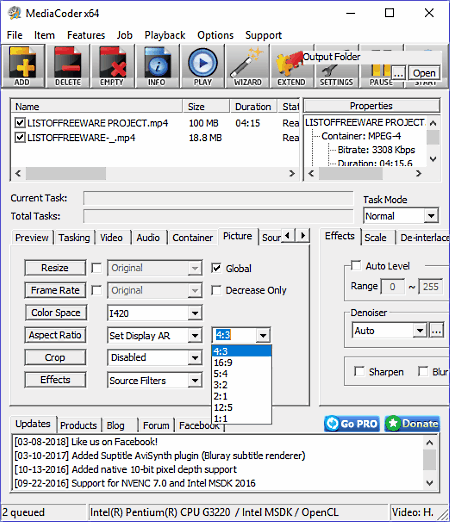 On its interface, there are a lot of menus, tabs, and settings to perform various tasks, but the option to change aspect ratio is present in the Picture tab. From the picture tab, select the desired aspect ratio (1:1, 4:3, 16:9, 5:4, 3:2, 2:1, and 12:5) from the Aspect ratio menu and initiate the conversion by clicking on the Start button.

If you go to the Container tab, then you can also choose output video format from various available ones, such as MP4, AVI, MKV, VOB, MPEG, ASF, etc. There are many tabs and settings present in this freeware, some of which are used for video editing. Through editing features, you can add effects (mirror, rotate, flip), logos, thumbnails, etc. to videos.

This software also features a smart hardware accelerator that can use GPUs from Intel, Nvidia, and AMD to speed up the conversion process. Plus, its ability to convert video using advanced codecs such as x265 (HEVC), etc. also helps, because this codec provides the best video quality without increasing the file size. 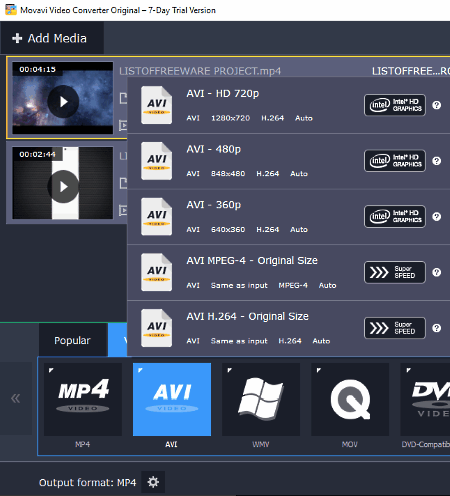 To convert video aspect ratio through this freeware, add one or more videos using Add media option. After that, select the desired video output format from the video tab and press the Output format settings button and vary resolution from frame size menu to change the aspect ratio. At last, press the Convert button to start the conversion process. Apart from resolution and aspect ratio, some other video parameters like Codec, Bit rate, Frame rate, Encoding type, etc. can also be varied in this software.

Note: This is not a full version of Movavi Video converter due to which many features such as Quality enhancement, video trimming, Automatic Conversion, online User Support are locked. By purchasing the full version, you can enjoy all of its features. 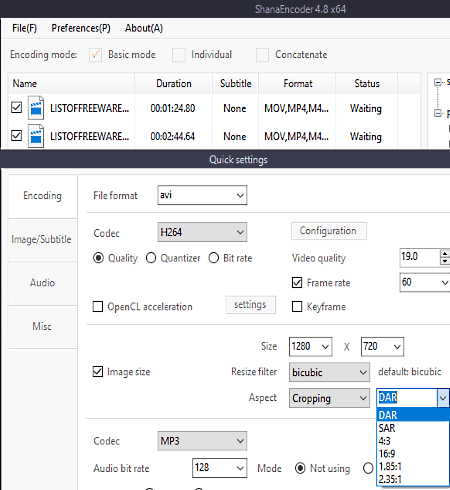 This software also supports a good range of video file formats to import and convert. To export a video, it supports formats like MP4, FLV, 3GP, MKV, MOV, AVI, and more. 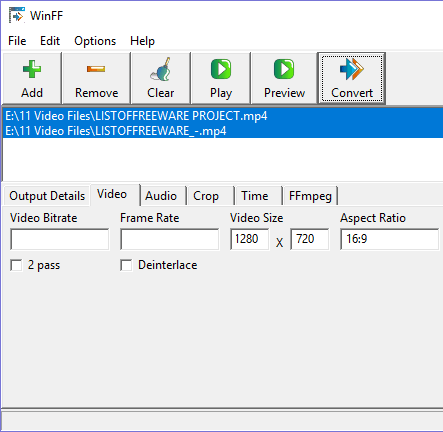 WinFF also contains some editing options through which you can rotate videos, crop videos, flip videos, and carry out various other operations.