Here is a list of best free video switching software for Windows. Video switching software are mainly used to switch between multiple video streams during live broadcasting. Video streams can be consisting of video files, webcam feed, image slideshow feed, game capture feed, etc. All of these software are also perfectly capable of live streaming and broadcasting. To live broadcast videos, all of these software use streaming services like Twitch, Hitbox, Mixer, etc. Apart from broadcasting and switching video streams, you can also edit various parameters of video streams like Resolution, FPS, Video Orientation, etc. Besides this, you can also find a Preview Window in all software, in which you can preview what will your users view during broadcasting. Some other handy features like Video Transition Effects, Video and Audio Recording, Video Editing, etc. features are also available in most software.

The working of these software are pretty similar where initially, you need to establish connection with a streaming service. After that, you need to add all your video streams in different scenes or frames. In one scene, you can add one or more video streams as well. After that, preview your stream and then go live using your streaming service. Lastly, you just need to manually select different scenes to switch between multiple video streams. To make video switching more convenient, you can set hotkeys in most software. Go through the list to know more about these video switching software.

OBS is my favorite software because it can record and broadcast multiple video, audio, game, webcam, etc. feeds. Its ability to support multiple streaming services (Twitch, Mixer, etc.) and presence of automatic scene switcher is also impressive. Plus, it does not contain any limitation regarding video resolution or number of input video streams.

You can also check out lists of best free Video Mixing, Video Effect, and Video Broadcasting software for Windows. 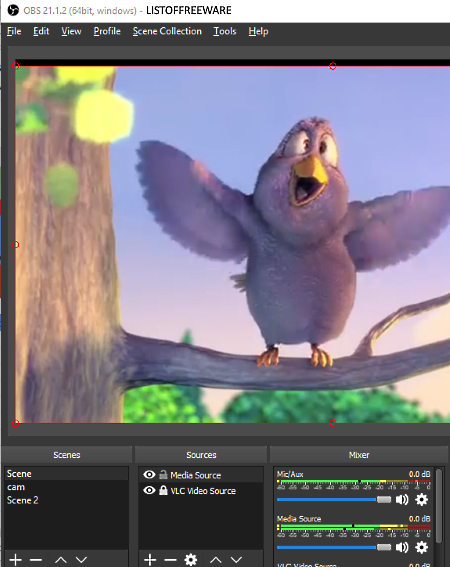 OBS is a free open source video switching software for Windows. It is also known as Open Broadcaster Software and is primarily used for video recording and video streaming. Using it, you can switch and mix multiple audio and video input streams during live streaming. Plus, it allows you to enter as many audio and video streams without any restrictions. Not just audio and video input streams, but images, VLC video sources, game capture, webcam feed, etc. can also be added and broadcasted live with it. To broadcast media content, it uses popular streaming services like Twitch, Mixer, etc.

How to switch between multiple video streams during live broadcasting using OBS:

This software also provides an Automatic Scene Switcher which will automatically switch to a particular scene when a scene gets inactive. You can also set a time after which this automatic scene switcher changes the scene. In this software, you get more useful features like Studio Mode (to preview scene and source before going live), High-Level View (to view video streams of up to 8 scenes at a time), Hotkeys (to switch scenes using hotkeys), and more.

All in all, this one is one of the best video switcher software in my opinion. 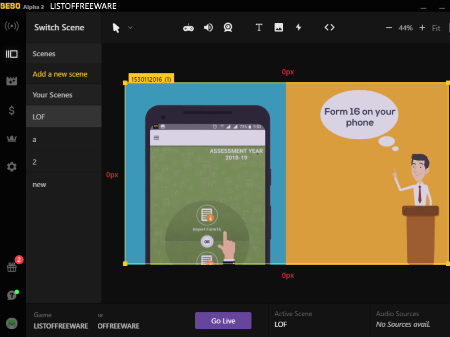 BEBO is a completely free video switching software for Windows. This software is primarily used to stream games, videos, reactions, etc. on Twitch. Besides Twitch, it can’t stream or broadcast on any other service. By using your Twitch account login details, you can easily login into this software and start broadcasting videos in just 2 minutes.

The interface of this software is very well organized and looks much better than various other similar software. At the center of the interface, you can view the Preview window where you can view all content which is being broadcast or going to broadcast. On the left part of interface, you get important features like Scenes (to add videos and other media content to stream and to switch between videos), Tips (to view all the received tips from your users), Community (to track and view your following), Settings (to set hotkeys to quickly toggle between multiple scenes, video resolution and FPS, transition effect, etc.), etc.

To broadcast and switch between multiple videos, audio, game stream, etc., first, add one or more video or other media content files in different Scenes using Scene section. After that, press the Go Live button to start video broadcasting. Now, just select different scenes through the mouse or use hotkeys to toggles between multiple scenes to quickly switch videos. That’s it.

Overall, it is one the best free video switching software because its simple broadcasting methods and its well-designed interface make your task very easy. The only drawback of it is its disability to support any streaming service other than the Twitch. 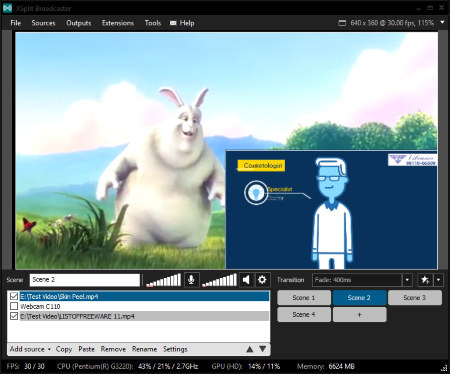 XSplit Broadcaster is the next free video switching software for Windows. Through this software, you can easily switch between multiple videos, images, game capture, text, etc. streams during live broadcasting. To broadcast various streams, this software uses streaming services like Twitch, Facebook, Mixer, and more. To switch between multiple video streams, it uses various scenes in which you can add one or more videos. By selecting different scenes, you will be able to quickly switch video streams.

Lets take a look at the process of switching video streams during live broadcasting:

To make video switching more interesting, you can use the Transition menu to add various transition effects like Fade, Collapse, Wave, Zoom, etc. Plus, an added option to manually change the transition time is also available. Apart from various inbuilt features, this software also supports various plugins and comes with its own Plugin store. From the plugin store, you can download handy plugins like Dailymotion Chat Viewer, Input Visualizer, Twitch Chat Viewer, Smashcast Chat Viewer, and more.

Note: This free version of XSplit broadcaster have multiple limitations like it adds watermark on local recordings, no skype video capture, not supporting videos having a resolution greater than 720p, maximum of 4 scenes can be used at a time, etc. Only by purchasing its paid version, you can remove all of its limitations. 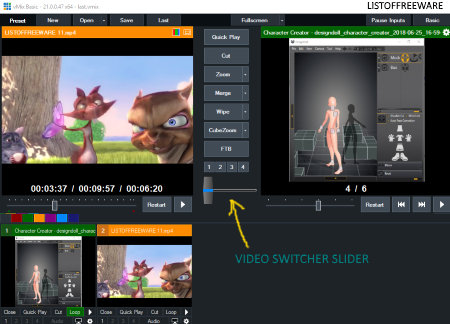 vMix Basic is another free video switching software for Windows. This software is mainly used to produce, built, and record videos. It even allows you to broadcast videos using streaming services like Twitch, Dacast, Ustream, etc. If you have multiple input video sources, you can also broadcast them together or one at a time. The video switching feature comes in handy when you have multiple input video sources and you want to frequently toggle between videos during live broadcasting. Apart from videos, you can also broadcast powerpoint presentations, images, image slideshows, webcam feed, multiple microphone feeds, and more. This video switcher also provides a lot of switching effects like fade, zoom, wipe, slide, merge, etc. which you can add to smoothly switch from one stream to another.

How to switch video streams during live broadcasting using this free software:

After the broadcasting, you can save all your settings as presets in a Vmax preset file to use these settings in future.

Note: In this free version of vMix, you can handle only two video streams at a time. Plus, many advanced features are also locked in this version. To remove all the limitations, you need to purchase the paid version of this software. 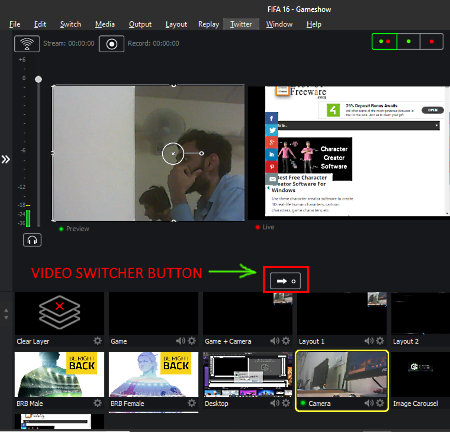 To add videos and perform switching between them during live streaming, you need to first select a predefined game template that will be shown before live streaming. After that, connect this software with a streaming service like Twitch, Hitbox, etc. After this setup, the main interface of this software will open up. On its interface, you get a Preview Area (to view the video before broadcasting) and Live Area (to view the live broadcasting video content). Just below Preview and Live Area, you get Master Layer area in which you can add multiple video, game, etc. input streams. Once all videos get added to the Master Layer. Select a layer to view it in the preview area and then press the Arrow button to make it live. Similarly, you can add more videos to different layers and switch between videos by selecting different layers. This freeware also provides a dedicated Switch Tab through which you can change the transition speed, transition effects, smooth or cut transition, etc.

Note: This free version of Gameshow comes with one limitation that a visual watermark will automatically get added to any streamed or recorded video having a resolution of more than 720p.