Here is a list of 7 best free system backup software for Windows.

Lets find out some of the useful details of each of these system image backup software. Meanwhile, you can also try registry backup, driver backup and system info. viewer software.

Here Are The 7 Best Free System Backup Software For Windows: 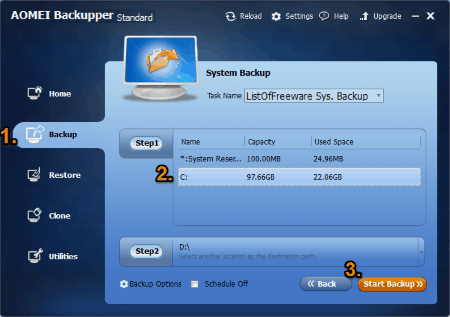 AOMEI Backupper Standard Edition  is a fast and handy system image backup software. It can backup the System, File, Disk and Partition of your operating system. It can restore the backup quickly as well. You can use its auto schedule feature to auto backup a system at a specific time. This system backup and recovery software also provides other useful features, such as: System clone, Partition clone and Disk clone.

To do a system restore from backup, you need to click on the Restore tab on the left side of the software interface and start restoring system backup file. 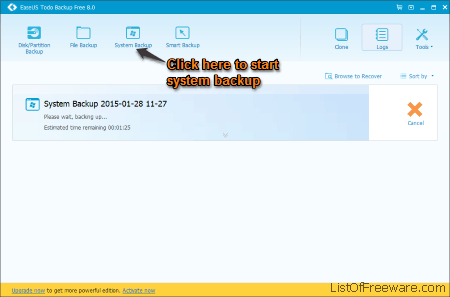 In case of a problem with your system, you can do a system restore, by selecting a system on its interface and click on the Recovery option (with Green color icon). The system restore process will be initiated. 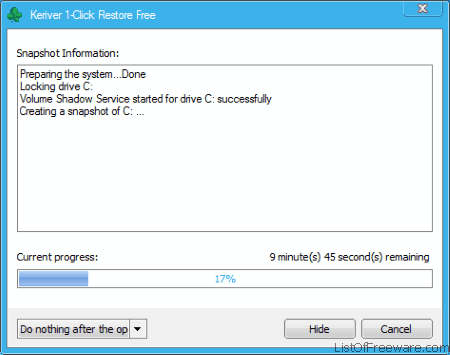 Keriver 1-Click Restore Free can make backup of the system drive and save the backup in a file format with EGO extension. It has a very different approach for making and restoring backup. It creates a backup by taking a snapshot of the system drive and it restores the backup when the computer restarts. It is available in a multilingual user interface with many supported languages, such as: English, French, German, Polish, Portuguese, and Chinese.

To backup system files, you need to open this software. This software will take care of the setting itself for making backup. You just need to click on the OK button on the bottom left corner of the software interface and system backup will be initiated.

It has a boot-time system restore process. So, you need to restart your PC for restoring the backup. 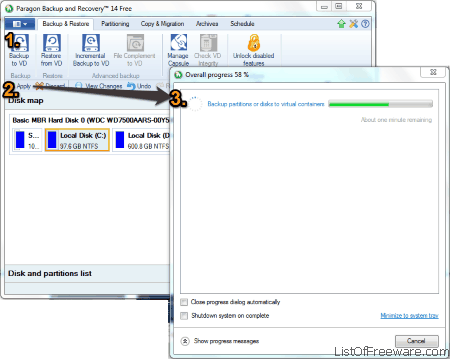 Paragon Backup and Recovery can backup multiple virtual disks or a complete system easily. It can do a system restore easily as well. It can save the backup in your computer, CD or DVD, or even over network. It lets you manually set the compression level and split the backup file images while backing up the system. It comes with desktop notification and schedule backup features. It also provides disk partitioning and mounting features.

To do a system restore by using this software, click on the Restore button on the top menu of the software interface and then, follow the instruction for restoring the backup. 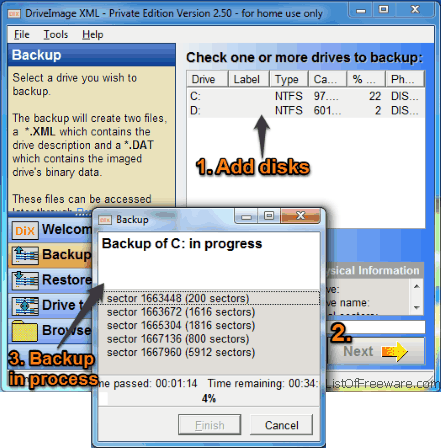 DriveImage XML is a very small system backup and recovery software. It can backup system files easily and quickly with task scheduler. It saves the backup file in DAT file formats with a XML file. It can create backup of multiple disks simultaneously. The setup file size of DriveImage XML is less than 2 MB. 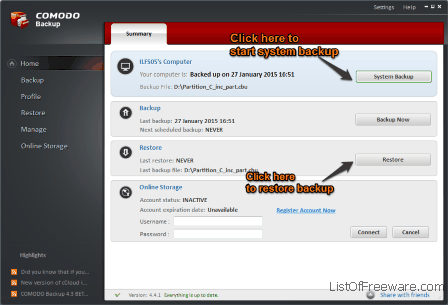 COMODO BackUp is a very handy system image backup software. It can create backup and it can also restore it. With this software, you will also get 10 GB online free storage for three months to store your backup. It comes with a very nice and clean user-interface. This system backup and recovery software is also a user-friendly software.

Comodo Backup can make system backup easily. To create backup, simply open this software and start making system backup. At the time of system restore, click on the Restore tab on the left side of the software interface and start restoring the system. 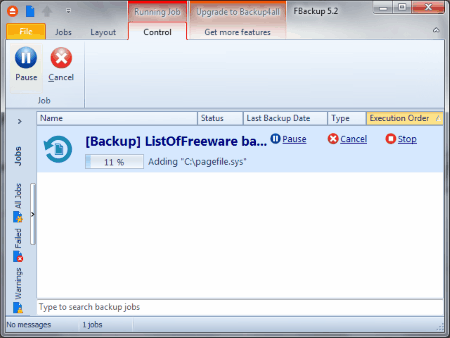 FBackup is a handy software for backing and restoring system image backup files. It can save and compress the backup file in zip file format. It has a feature that it can save the backup in the computer as well as in your connected network. It comes with desktop notification and it also has some useful plugins to enhance its functionality. Its interface is available in multiple languages, such as: Spanish, French, German, Italian, Portuguese, etc.