In some software, you can also add texts and images, and perform basic editing on video before the conversion. Using these, you can also enhance the visual appearance of a GIF by applying filters, effects, etc. Plus, you can preview all the modifications quickly, as some of these let you preview changes before the actual conversion. Overall, these software are easy to use and all of these can handle various video formats like MP4, WMV, AVI, MPEG, and more.

My Favorite Video To GIF Converter Software For Windows:

QGifer is my favorite software because it is easy to use and supports many video formats. Apart from video to GIF conversion, it also lets you edit the input video to create a custom animated GIF. Plus, it also lets you specify the GIF property like GIF Frame Rate, GIF Quality, GIF Resolution, etc. 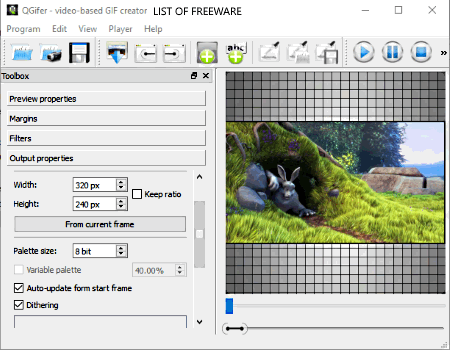 QGifer is a free video to GIF converter software for Windows. Through this software, you can easily convert a video to an animated GIF. Not just conversion, it also lets you add text and images to input videos to create a custom GIF. Plus, features like video trimmer, filters, margins, FPS changer, etc., are also available in it.

How to create animated GIF from videos?

Now, to create a GIF, first, add a video file of one of the supported formats like AVI, MP4, MPG, OGV, etc. After that, choose the start and end frame of video using start and stop selection tools. On the selected part of the video, you can add images and texts using respective tools from the top toolbar. On its preview window, you can view the changes in real time. Its preview window also provides a slider to jump between frames and also to know about the accurate frame number. 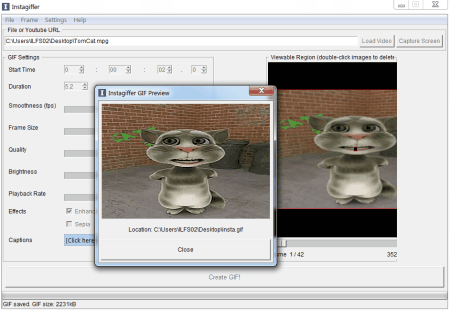 Instagiffer is another free video to GIF converter software for Windows. With the help of this software, you can convert a video into an animated GIF. Not just that, you can also capture and convert an online video to GIF through this software. In it, you also get various useful tools like add text, filters, loops, etc. Along with various features, it also supports a lot of video formats like MP4, AVI, WMV, MOV, MPEG, etc.

How to create GIF from video using Instagiffer: 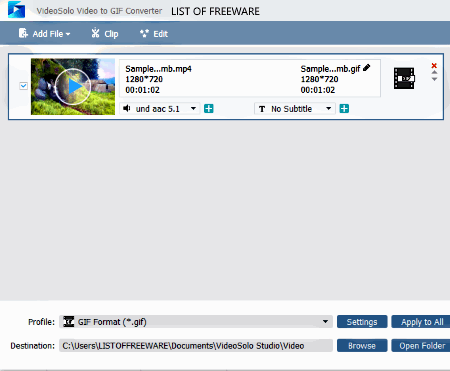 VideoSolo Video to GIF Converter is another free and easy to use video to GIF converter software for Windows. Using it, you can convert multiple videos to GIF at a time. It also provides tools like video trimmer and text tool to perform basic editing on the input video file. Another handy feature of this software is that it supports a large library of video formats like MP4, MPEG, AVI, MKV, WMV, and more.

How to convert video to GIF using this software:

This freeware also provides multiple preview players or GIF players in various editing sections so that you can immediately analyze the changes made on the input video. 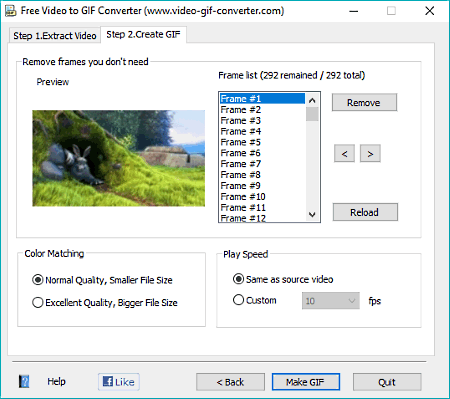 Free Video to GIF Converter is a free video to GIF converter software for Windows. In this software, you can convert videos of AVI, MP4, FLV, 3GP, MOV, and WMV formats to an animated GIF. 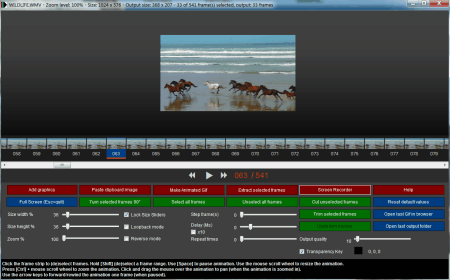 KickMyGraphics is another free video to GIF converter software for Windows. This software is also capable of converting images of various popular formats to an animated GIF. Plus, a handy screen recorder feature is also available in it through which you can quickly convert the screen recorded video to a GIF.

In this software, you can select and convert a small part of a video or a whole video to the GIF. Along with conversion, you can also make various changes on the input video which reflect on the output GIF. Some of the changes which you can make on the video are video frame editing (trim frame), frame rotation, adding a delay between frames, change in output quality, etc. Once all the adjustments are done, you can start the video to GIF conversion process. 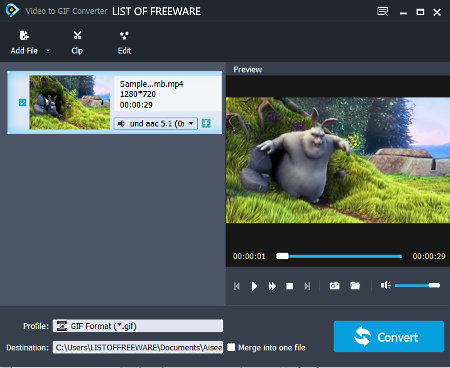 In this software, you also get some additional features like Preview Player (to play the input video), File Merger (to join one or more videos into one), and Batch Video Converter (to convert multiple videos at a time). 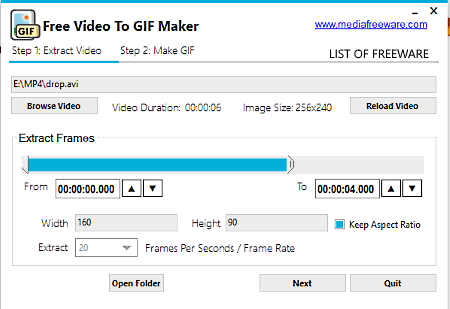 Now let’s take a look at the process of video to GIF conversion using this free software:

This software is also quite good in handling videos of multiple formats as it supports some of the popular video formats like FLV, WMV, MPG, MP4, AVI, etc. In general, it is another good video to GIF converter software. 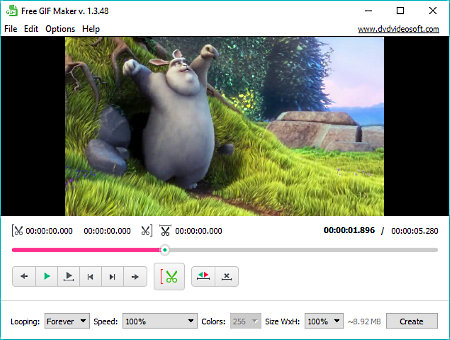 To create a GIF, it provides a time selection slider to select start and end point of a video which you want to convert into a GIF. Plus, you also get tools to set the GIF dimensions, color, GIF speed, and Looping. After all the necessary changes to the video, press the Create button to start the video to animated GIF conversion process. Overall, this dedicated GIF maker software can come handy for novice users.