Here is a list of Best Free Open Source Audio Mixer Software for Windows. You can use these audio mixing software to mix multiple sound samples and audio files in real time and play them live. All these software are absolutely free to use and you can even find their source codes online. The source codes of these audio mixers can be accessed and manipulated without any restrictions.

Some of these are dedicated audio mixing software in which you can create audio mixes live and play them as well. While a few listed software are dedicated audio editors in which you get a multi-track timeline that helps you mix different audio files. You can play the created sound mixes while controlling different parameters like volume, gain, pan, mute, solo, crossfader, etc. Many software provide various effects to add to the audio files. In most of these audio mixers, you can record or export live audio mix to an audio file.

All in all, these are feature rich software using which you can create live audio mixes. In terms of working, these are not that hard to use and you can also find online tutorials to get started with them.

Mixxx is one of my favorite audio mixing software as it provides a variety of features to mix multiple sounds. It is a beautifully designed DJ software that provides several decks to load and mix different audio files. You can even record live playing audio mix using it.

If you use Audacity, it is another handy alternative for you for live audio mixing.

You may also like some best free Ambient Sound Mixer, Video Mixing Software, and DJ Software for Windows.

Mixxx is a free open source audio mixer software for Windows, Mac, and Linux. It is basically a DJ software that lets you import, mix, and play multiple tracks together. While playing audio tracks, you get the flexibility to change a lot of parameters including tempo, key, effects, volume control, replay gain, speed control, etc. It provides a variety of features that you can look forward to; let’s check them out.

It is one of the best free open source audio mixing software that helps you mix multiple soundtracks and play them live. 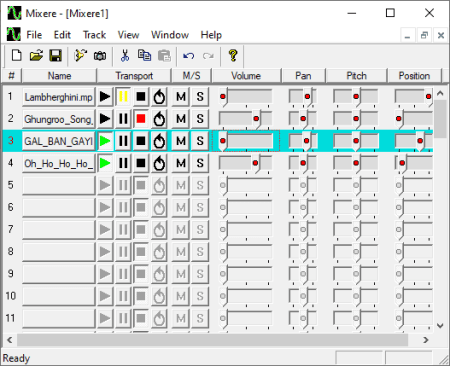 Mixere is another free open source audio mixer software for Windows. It allows you to create audio mix of multiple music files while adjusting a lot of parameters. You can create as many audio mixes at a time as you want as it has a multi-tab interface.

It is a nice and easy to use open source software to mix audio files live and play them while controlling various playback functionalities. 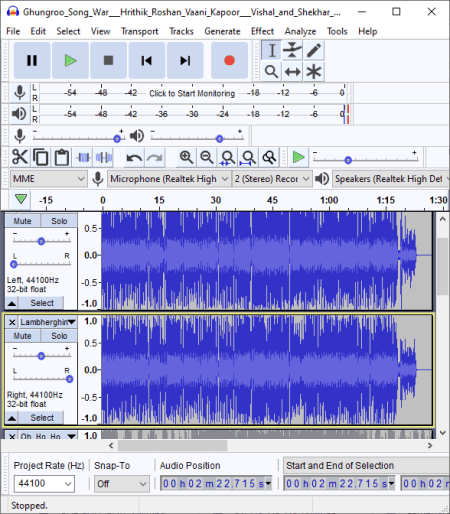 Audacity is a featured open source audio editor that can also be used as an audio mixer. It provides a multitrack timeline editor in which you can import multiple audio files at once and mix them. You can play the created audio mix live using its inbuilt music player. Furthermore, you can also save the audio mix in any of its supported output formats.

In terms of an audio mixing software, here are some of its key features:

It is one of most feature rich audio editing software using which you can mix various audio tracks and play them live. 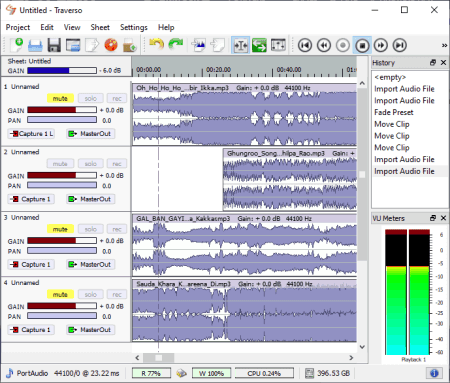 Traverso is the next free open source audio mixer for Windows and Mac. It is primarily an audio editor that lets you mix audio and play them. To do so, it contains a multi-track timeline editor using which you can import, mix, and play multiple audio files.

It is a nice multi-track audio editing software that you can also use you create live audio mixes. 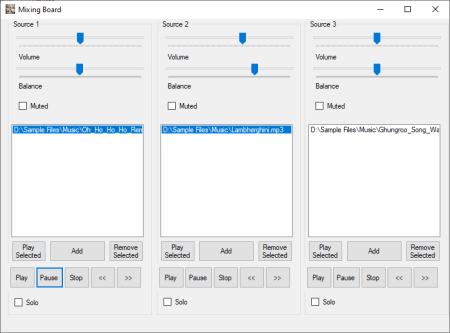 Audio Mixing Board, as its name implies, is yet another open source audio mixer for Windows. It is a very basic software to live mix audio. It provides four different sections to load multiple different audio files in each. You can later mix and play them live.

It is a decent open source audio mixer that lets you mix and play multiple audios in real time.