Here is a list of Best Free Open Source Video Analysis Software for Windows. These are video analysis software that you can find for free as well as download their source code. If you want, you can modify source code of these freeware without any restriction.

As you can guess by title, these software help you analyze a video, specially sports videos. These software support videos of all major formats which you can open for analysis, e.g., MP4, MOV, AVI, FLV, etc. For video analysis, these software provide all standard tools including magnifying glass, zoom, pan, video filters, and more. You can even make annotations on a video using circle, line, text, and more drawing tools. Furthermore, you can measure angle, distance, and other parameters in a video. These also let you adjust playback speed of a video to speed it up or slow it down; mostly software let you play videos in slow motion. All in all, all software facilitate you with enough tools to analyze a video.

Additionally, you get more useful tools in these software which may come in handy in video analysis process. Some of these tools include two video compare mode, high speed camera, mirror video, frame by frame video analysis, export features, and more. You can go through the list to know more about these open source software.

Kinovea is one of the most feature rich software to use for analysis of sports videos. In it, you can also open two videos simultaneously and compare them with each other. Also, analyzed video and data can be saved in any of the supported video formats. Its user interface is also very clean and intuitive. 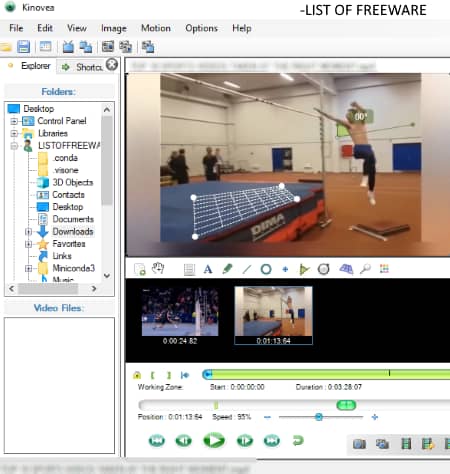 Kinovea is an open source video analysis software for Windows. It is a sports video player which also provides various tools to let you analyze sports videos. To import, view, and analyze videos, it supports a wide number of video formats including MP4, FLV, 3GP, MKV, AVI, MPG, MOV, WMV,VOB, etc. Let’s checkout its key functionalities that allow you perform analysis on videos. 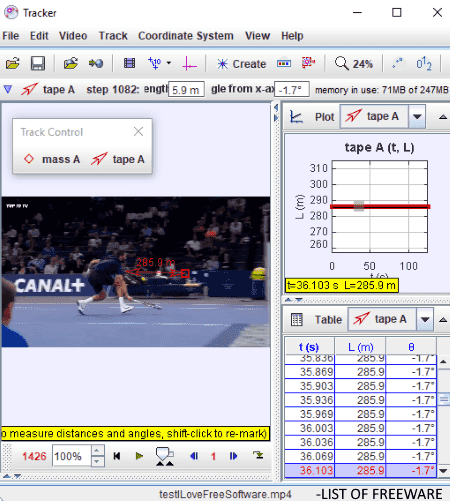 Tracker is a feature rich open source video analysis software for Windows, Mac, and Linux. It is specially designed for Physics students to help them analyze videos. You can import and analyze videos in all commonly used video formats including MP4, MOV, AVI, etc. Now, you can check out its key features in detail below. 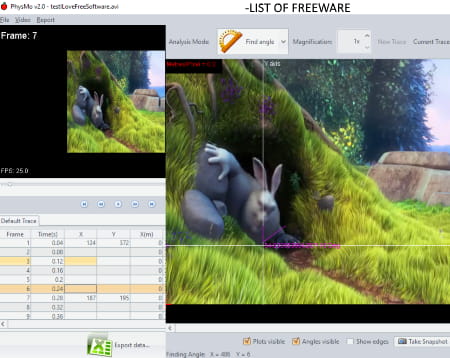 PhysMo is another open source video analysis software for Windows, Mac, and Linux. It is basically used as a video motion analysis which comes in a portable package. You can run it without installation and analyze a video in it.

It provides a lot of analysis modes that you can use to analyze different aspects of a video. You can import videos of multiple formats in it such as MP4, AVI, FLV, etc. As you import a video, it displays different frames of the video on the screen with time and X & Y values. The frames are saved in a specific folder to analyze individual frames of a video. Now, lets see what are the main features of this open source video analysis software that you can look forward to.

It is another good open source video analysis software with all essential features and motion analysis tools.