Here is a list of best free motion analysis software for Windows. Motion analysis is widely used in sports to closely analyze movements of athletes to help them improve their game. To analyze movements, these software use various analysis tools on the prerecorded videos of athletes. These software provide analysis tools like slow motion, frame by frame analysis, magnifier, zoom, reverse video playback, etc. The slow motion and frame by frame analysis tools are most common and effective analysis tools. The slow-motion tool significantly slows down the video to help you understand the actions more clearly. Frame by Frame tool is also similar to the slow motion tool but instead of slowing down the video, it shows one frame of video at a time. Besides analysis tools, you also get various annotation tools like hand tool, rectangle, ellipse, etc. to mark important movements in video.

Using these software, you can analyze videos of various formats (MP4, AVI, WMV, etc.) as most of these support multiple formats. After the analysis, you can again save the video in its native or other supported formats. Go through the list to know more about the function and features of these motion analysis software.

Kinovea is my favorite software because it contains all essential motion analysis tools including slow motion and reverse playback. Plus, it also lets you mark or annotate important instances of the video.

You can also check out lists of best free Video Analysis, Text Analysis, and Beam Analysis software for Windows. 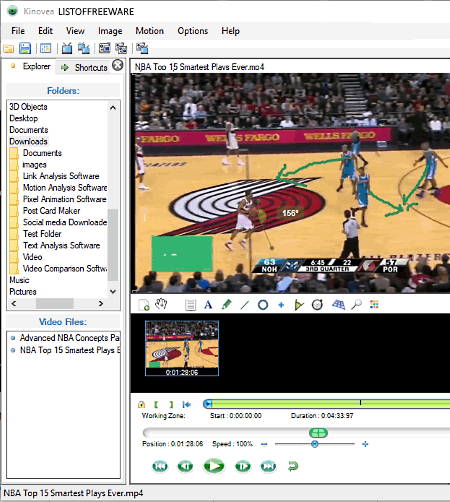 Kinovea is a free open source motion analysis software for Windows. This software is mainly used by sports enthusiasts to view and analyze the techniques of athletes. In it, you can import a sports video and analyze various aspects of the gameplay including the motion. To analyze the motion, it provides a dedicated Motion menu that contains Highspeed Camera and Reverse tools. The Highspeed camera tool lets you slow down the video up to 10 times so that you can easily analyze the motion and action of players. Its reverse tool is also quite handy as it lets you play the video in reverse order for further motion analysis.

This software contains more video analysis tools that you can use such as Two Video Screen (to compare two videos side by side), Angle (to accurately measure the angle of body movements), Perspective Grid (to calculate the distance of motion), Cross Markers (to mark important movements), etc.

This video player can also be used as a standard video player. It supports videos of various popular formats like MKV, MP4, AVI, WMV, etc. Plus, important video player features like seekbar, volume controller, repeat, jump to next/previous video, etc. options are also present in it. 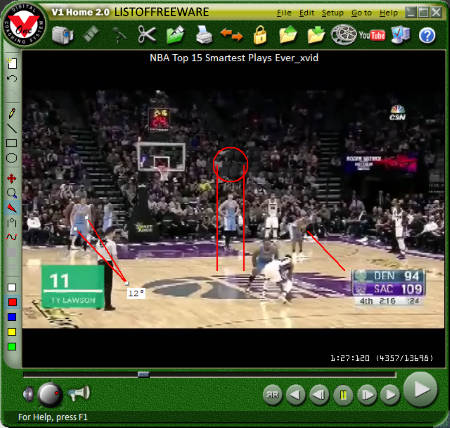 V1 Home is yet another free motion analysis software for Windows. In this software, you can perform frame by frame analysis of sports video to deconstruct movements of athletes. Plus, you can also play slow-motion reverse video to perform reverse motion analysis. It also offers various handy annotation tools namely Free Hand, Lines, Ellipse, and Rectangles to mark and annotate video for reference. In it, you also get a handy magnifying tool that allows you to zoom in any part of the video to get a closer look at movements.

In this software, you can input sports video either by directly connecting the camera feed or using the locally stored video. After adding the video, you can start analysis using various available motion analysis tools. All the essential tools are present on its main interface which you can easily access and use. Overall, it another easy to use motion analysis software.

Note: In this free version of V1 Home, many advanced features like split screen compare, online video downloader, upload video to server, etc. are locked. To unlock all of its features, you need to purchase the paid version of this software. 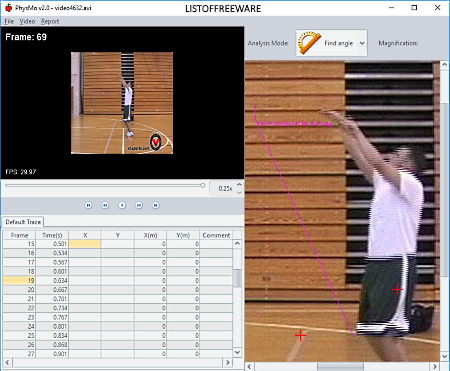 PhysMo is a free and portable Java based motion analysis software for Windows. This software allows you to analyze sports videos and determine multiple parameters. It also provides various analysis modes (calibrate, find angle, plot, and set origin) to analyze different aspects of the video. When you input a video in it, then it first decompresses that video and saves all frames of the video in a folder for frame by frame analysis. Plus, a complete frame by frame default trace values like X/Y distance coordinates, Frame time, etc. are also provided by it that you can also export as Excel File.

On the main interface of this software, you get a small video player along with an enlarged video analysis section. In the video player, you can play video at normal, half, and quarter speeds to analyze motion. When you pause the video for the analysis, then you get an enlarged version of the current frame in the enlarged video analysis section. To further enlarge or zoom in on the frame, you can use its magnification tool. Analysis modes are also present in this section using which you can find out the angle, distance, speed of motion in meter/pixel, etc. values. 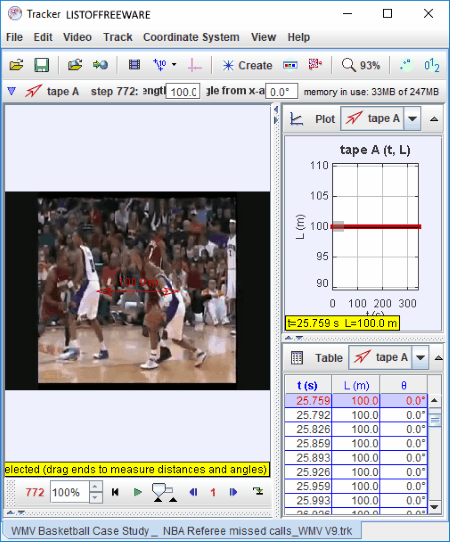 Tracker is a free and open source motion analysis software for Windows. It is based on Java and you need to have Java in your system to run this software. This software is mainly used as video analysis and modeling tool for Physics. However, it also provides all the necessary tools to analyze the motion of athletes in a video. Some of the video analysis tools and features provided by this software are slow-motion video, frame by frame video playback, calibration tool, distance measuring tool, coordinated axis, reference frame, etc. Using these tools, you can measure each and every action of the video. After the analysis, you can save the video as WMV or export it as tracker zip, video clip, tracker file, thumbnail image, and data file.

In this software, you also get features to analyze the Physics related parameters like point mass, center of mass, vector, vector sum, line profile, etc. There are a lot more tools present in this software for video analysis. However, the use of available tools is not very simple. To get to know more about the functions and tools of this software, you can watch this Tracker tutorial. 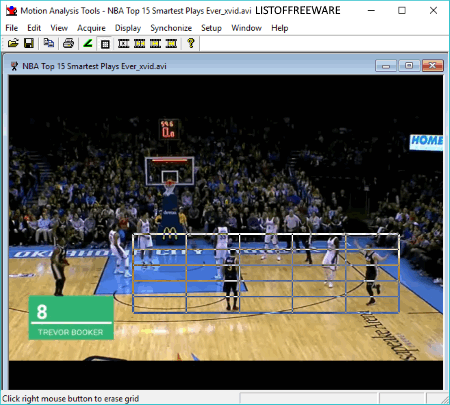 Motion Analysis Tools is another free motion analysis software for Windows. In this software, you can input sports videos and pictures to analyze movements and motion of athletes. In case of video, you need to input a video; it only supports MPEG, MPG, AVI, and WMV video formats. As soon as you add a video, an inbuilt video player will start playing the video. Now, to perform motion analysis, you can take help of its Angle, Joint Angles, Grid, Distance Marker, etc.tools.

Let’s take a brief look at the main functions of Motion Analysis Tools:

All in all, it is another handy motion analysis software for Windows. 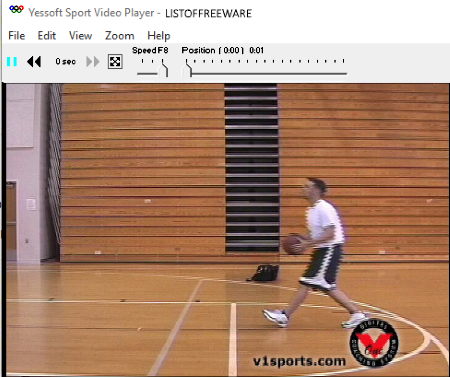 Yessoft Sport Video Player is the next free sports analysis software for Windows. It is a simple and straightforward sports analysis software. In it, you can add a sports video and closely analyze the motion of players by slowing the video down. It provides three video speed modes namely 1, 1/2, and 1/4 to change video speed according to your requirements. In mode 1, the video is played in the normal speed, while in mode 1/2 and 1/4, video slows down to half and quarter of the actual video speed. Frame by frame analysis is also present in it that allows you to move to next or previous frames of video at a time. A zoom option is also available to closely analyze a specific action of the video. For each available feature, you get a dedicated shotcut key like F8 (to change video speed), F5 (to move to previous frame), F6 (to move to next frame), etc. In general, it is one of the simplest video analysis software that supports almost all video formats. 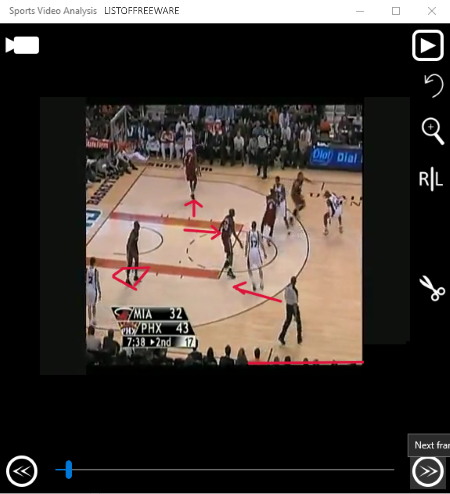 Sports Video Analysis is a completely free motion analysis app for Windows 10. Using this app, you can easily analyze motion of athletes by using any sports video. In it, you can enter sports video of MP4 format as it does not supports videos of any other formats. After adding the video, you can either play the video at the normal speed or you can use its Frame buttons to move to the next or previous frame of the video at a time. Besides this, it has one more analysis tools named as Mirror Video, using which you can flip video horizontally for left or right handy analysis. During the analysis, you can mark or annotate any part of the video through its annotation tool. After motion analysis, you can cut a specific part of the video by using its Cut tool and save it as the MP4 file.