Here is a list of best free photo to cartoon software for Windows. Using these software, you can turn pictures into cartoons with ease in just a few steps. Many of these cartoon maker software perform one by one photo conversion, but one of them supports batch photo to cartoon conversion also. Moreover, these software provide many configurable options to manipulate cartooned photos as per your need. Some of them provide options to alter color blending, edge intensity, strength of effect, etc. Some let you add sketch, contrast, color, grey, etc. effects to cartooned photos. All in all, these cartoon picture maker software contain a good number of image manipulation features for better conversion.

Furthermore, you can use these photo cartoonizer software with a wide variety of file formats. JPEG, BMP, PNG, TIFF, GIF, RAW, PSD, etc. are some of them.

My Favorite Photo To Cartoon Software:

Cartoon Generator is one of my favorite photo cartoon maker software. Unlike other software, it supports batch photo to cartoon conversion. Also, it contains a range of effects to apply on cartooned image.

Cartoonist is also a good choice as a software to convert photo to cartoon. It actually lets you create funny caricatures of photos present on your PC. 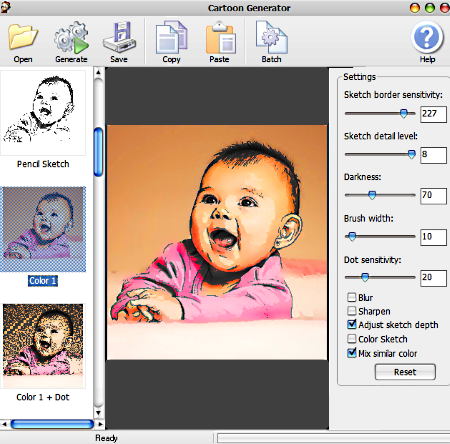 Cartoon Generator is a free cartoon maker software for Windows. It lets you generate cartoons from a single photo, or you can use it as a batch photo to cartoon converter.

It provides you a lot of options to configure for better photo to cartoon conversion. There are several sliders given on its interface under Settings menu. You need to adjust these sliders to apply cartoon-like effects on photos. Some of these settings are Darkness, Brush width, Dot sensitivity, Blur/Sharpen, Color Sketch, Adjust Sketch Depth, etc. After adjusting given settings, you need to click on Generate button to create photos with cartoonist effects. After that, it lets you choose from various effects from the left panel of the interface. These effects include: Sketch, Sketch+Dot, Pencil Sketch, Sepia, Sepia+Dot, and various color, contrast, and grey effects. Thus, you can convert photo to cartoon by applying desired effects.

As mentioned above, you can perform batch photo to cartoon conversion also. For that purpose, just click on the Batch option and choose Add Files or Add Folder option. Now, you need to specify Cartoon effect (Sketch, Sketch+Dot, Pencil Sketch, etc.), output format, etc. parameters. When you are done with given configuration options, click on Convert button to initiate photo to cartoon conversion.

You can convert JPG, BMP, PNG, GIF, and TIFF photos to cartoon. Also, you can save resulting image in any of the aforementioned formats. 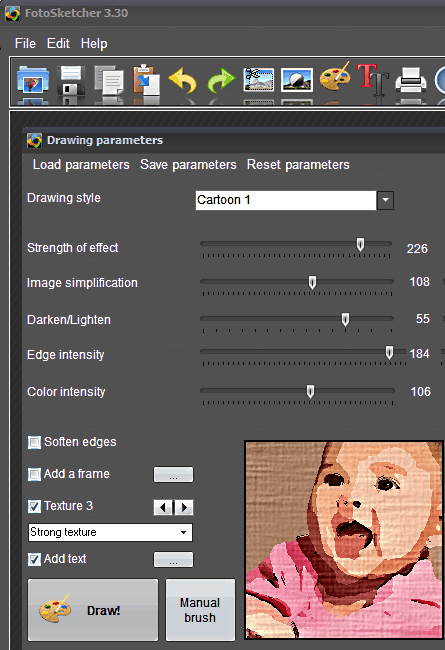 FotoSketcher is another free photo to cartoon maker software for Windows. This is basically a software to add different kind of effects to photos and cartoon effect is one of them. There are two cartoon effects available in this software, namely, Cartoon 1 and Cartoon 2.

After opening a photo (JPG, BMP, or PNG format.), you need to click on Drawing parameter menu to access various options to manipulate the opened photo. In this menu, you get options to apply various effects, such as Pencil Sketch Effects, Painting Effects, Stylize Effects, etc. The cartoon effects are categorized in Stylize Effects sub-menu.

After selecting Drawing style as Cartoon, you can adjust color blending, edge intensity, Strength of effect, Darken/Lighten, texture, etc. for better manipulation of photo. Also, you can add desired text to the photo. After making appropriate changes, you need to click on Draw! button to create cartoons from photos.

Also, it displays the original photo along with the resulting one in a side by side view. After getting desired output, you can save the photo as JPG, BMP, or PNG image. 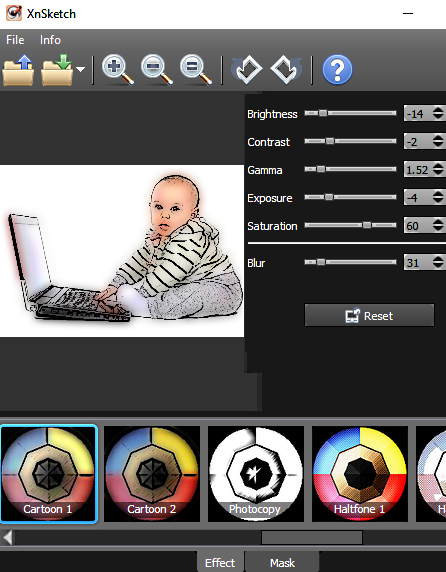 XnSketch is another free software to create cartoons from photos. The interface of this software is quite simple and you can easily access various photo effects as they are arranged in the lower panel of the interface with big icons and names.

After opening an image to add cartoon effect, you need to click on available cartoon effects that are Cartoon 1 and Cartoon 2. After that, you can adjust brightness, contrast, saturation, gamma, blur, etc. sliders to make desired adjustments to the image. Besides cartoon effects, it also lets you apply photocopy, halftone, sketch, black & White, and many other effects to images.

It supports tons of file formats to open an image. ABR, ANI, BMP, CRW, DNG, RAW, HDR, IMG, JPG, PAT, PSD, are some of them. But, to save converted image, you get only PNG and JPEG formats. 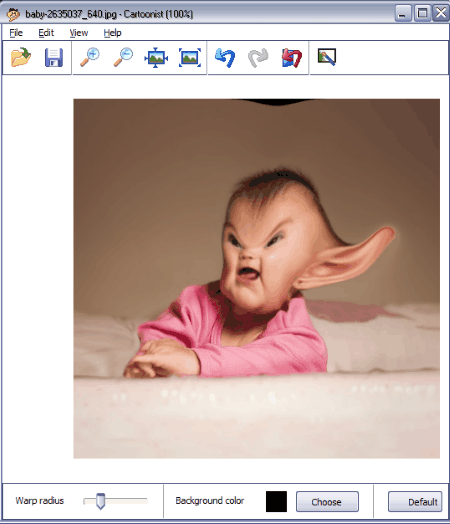 Cartoonist is another free software that can be used to create funny cartoons from photos. It actually lets you generate caricatures. To do so, it facilitates you with a warping tool whose warp radius can be adjusted to the desired size. You just need to hover warp tool over the image to apply cartoonist effects. Apart from warping tool, you also get options like Undo, Redo, Zoom in, Zoom Out, and some basic image viewing options. Thus, it is one of the simplest cartoon maker software.

Using this photo to cartoon maker software, you can convert and save photos with following formats: JPG, PNG, BMP, GIF, and TIFF. 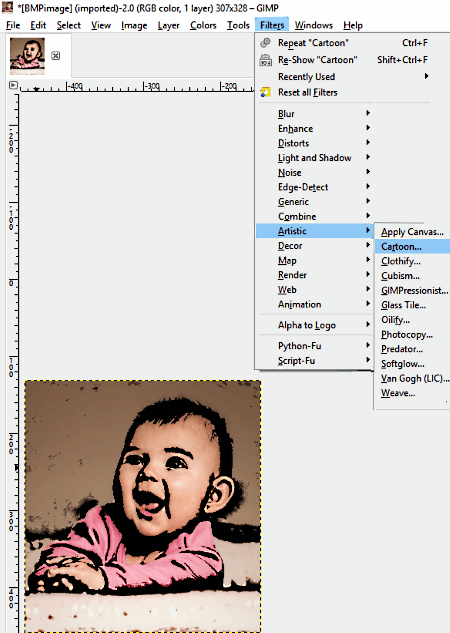 GIMP is one of the most popular free image manipulation software, which can also be used to add cartoonist effect to photos. To do so, you can easily access cartoon option by going through the following path: Filters > Artistic > Cartoon. It offers two options namely, Mask radius and Percent black to adjust applied cartoon effect. You can also checkout preview of cartooned photo and further make corrections in it. To make corrections, you need to select appropriate Mask radius and Percent black and draw at the desired portion of the image to manipulate it as per your wish.

You can use this cartoonizer software with almost any image format as it supports XCF, JPG, PNG, GIF, TIFF, various RAW image formats, and many other file formats. 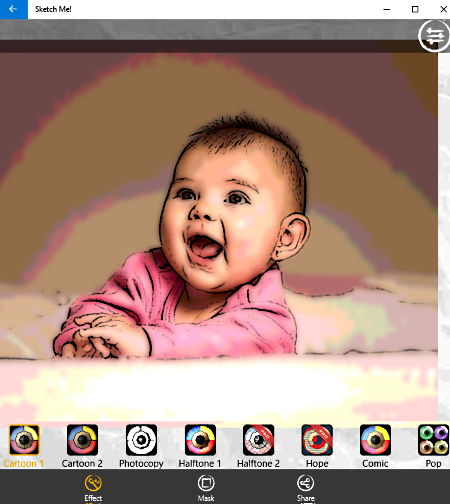 Sketch Me! is a free Windows 10 app for photo to cartoon conversion. To do so, you can either choose a photo present in your PC, or take a photo using camera and then apply cartoon effects to it. As you launch this app, click on Photo Album or Camera option to select a photo to cartoonize it.

There are several effects present on the lower part of the interface. Cartoon1 and Cartoon2 are two of the cartoon effects you get in this software. In addition to cartoon effects, it also provides options to add effects like: Neon, Pastel, Dull Pastel, Sketch B&W, Pencil, Photocopy, Comic, etc. After applying an effect to photo, you can access settings, such as Effect intensity, Brightness, Contrast, etc. to make adjustments accordingly.

After making cartoons from photos, you need to click on Share option to get access to Save to gallery option or share the photo via mail, or other services. It only supports JPG image format. GeniuX Photo EFX is a free and open source photo to cartoon maker software for Windows. Using this software, you can apply cartoon effects to files having BMP, TGA, PNG, JPG, TIFF, PSD, WMF, etc. formats. To apply cartoon effects, you need to go through the following path: Filters > Photo EFX > Cartoon. There are three presets (Pop Art, Cut Out, and HI detail) available to apply cartoon effects to photos quickly. Also, you get options to adjust and manage details, colors, and image definition by using respective sliders given on its interface. That’s the way you can create cartoons from photos.

After making cartoon from photos, you can use Export Image option to save resulting image in any of the aforesaid formats.

In addition to photo to cartoon conversion, you can also use this software for photo retouching, red-eye removal, adding effects like Vignette, Lens Blur, adjust color, brightness, etc. and more.