Here is a list of best free comics strip creator software for Windows. Comics strip is similar to a comic that contains various interrelated characters, drawings, and dialogue boxes. However, there are also some major differences between them such as content size as comic strips usually contain way less content than a comic. The other difference is in their presentation, as comics strips consist of multiple joined frames, while comic consists of pages. In order to create comic strips, you need these comics strip creator software. In most of these software, you get various predefined inbuilt characters, background scenes, and dialogue boxes. Plus, options to change characters appearance, characters size, text font, text size, etc. are also available. In some software, you can basically load and merge predefined characters and background scenes in the form of a comic strip.

The process of creating a comic strip is pretty simple in all of these software. Plus, most of these can also save the completed comic strips in PNG, JPG, BMP, etc. image formats. Go through the list to know more about these comics strip creators.

You can also check out lists of best free Manga Reader, Cartoon Story Maker, and Manga Downloader software for Windows. 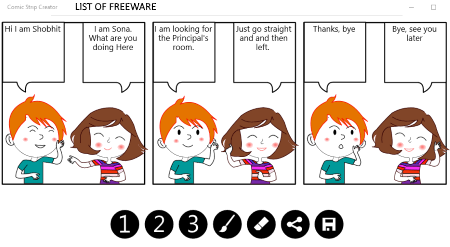 Comics Strip Creator is a free comics strip creator app for Windows. It is one of the simplest apps to quickly create comic strips. In it, you can create a comic strip consisting of a maximum of three scenes. To create a comic strip, it provides various predefined strips consisting of different characters. You can select any one of the available strips and change characters hairstyle, hand movement, and their clothes. Plus, multiple balloons to show the conversation between characters are also available.

This app does not allow you to create a strip by manually drawing or by importing images, which are its main drawbacks. Still, for simple comics strip creation, it is one of the best app available out there. After creating a strip, you can save it as PNG image or email it by using its Share option.

Note: It is an ad-supported app and shows advertisements on its interface. 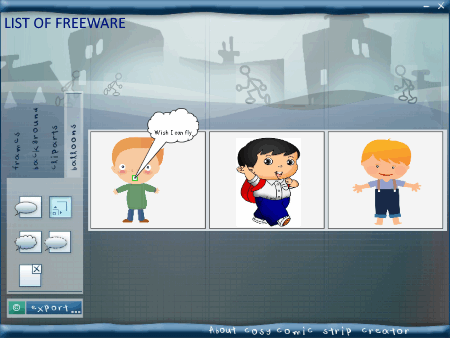 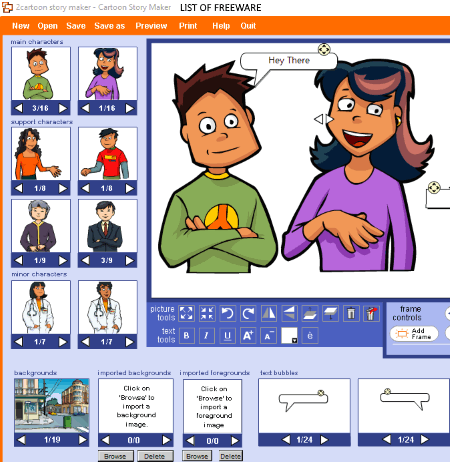 Cartoon Story Maker is another free comics strip creator software for Windows. As its name implies, it is mainly used to create cartoon stories, but it can also be used to create great comics strips. This software does not impose any limit on the number of scenes you can add in one comic strip. To create scenes, it provides a lot of main, minor, and support characters, dialogue boxes, and multiple backgrounds. You can easily drag and drop characters and backgrounds over the frame to create one scene of the comic strip. To create more scenes, add more blank frames and repeat the process.

This software also allows you to import external images that you can add in the scene to create a comic strip. In order to correctly position characters and background, you get tools like rotate, flip, bring forward, send behind, etc. Plus, tools to change font, color, and size of text are also available. Once the whole story gets completed, you can save it in HTML format that opens in a web browser as individual pages. To save all frames in one comic strip, you need to use its Print option that allows you to save the comics strip as PDF and JPG formats. 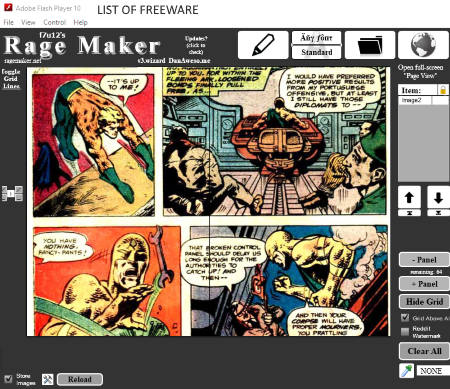 Rage Maker is the next free comics strip creator software for Windows. In this software, you can create vertical comics strips by joining multiple comics images. In order to create a comic strip, first, you need to upload images consisting of characters and background. After that, press the Pencil button to add dialogues at any part of the strip. Once one frame of the strip gets completed, click on the +Panel button to add more blank area below the first frame to add more characters or background in form of an image. Similarly, you can add more frames and create a comics strip consisting of multiple frames.

In this software, you can also add background images and character images by entering the URL in its load image from another website option. Plus, its ability to supports locally stored images of JPG, PNG, and GIF formats is also impressive. Once the comic strip gets fully completed, then use its Preview option to take a look at the final comics strip. Lastly, save the strip as an image or directly upload it to imgur.

This software also offers some additional features such as Watermark Adder, Color Picker, Grid Line Toggler, and more. In general, it is a straightforward comics strip creator. 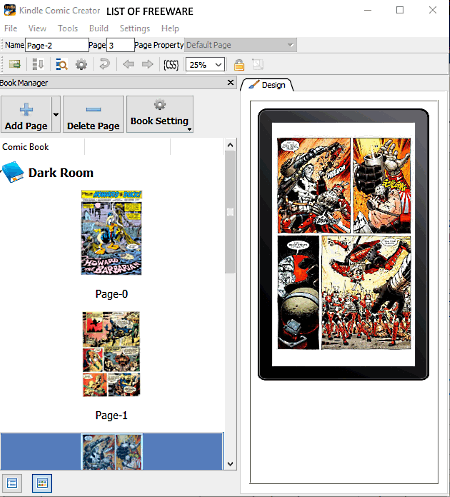 To create a comic strip, you need to have complete comics frame images with characters and dialogue boxes. By loading all your frame images in this software, you can easily join them and create one continuous comics strip. It disability to make changes on the frames of a strip is a disadvantage of this software. The main changes or settings that this software allows on comic strip is to add or edit information about comics strip (author, title, etc.), aligning frames with one another, and compiling frames to make them compatible with Kindle reading devices. The option to preview and compile the comic strip is present in the Build Section. After the compilation, you can save the comics strip as the KF8 book (Kindle supported format).